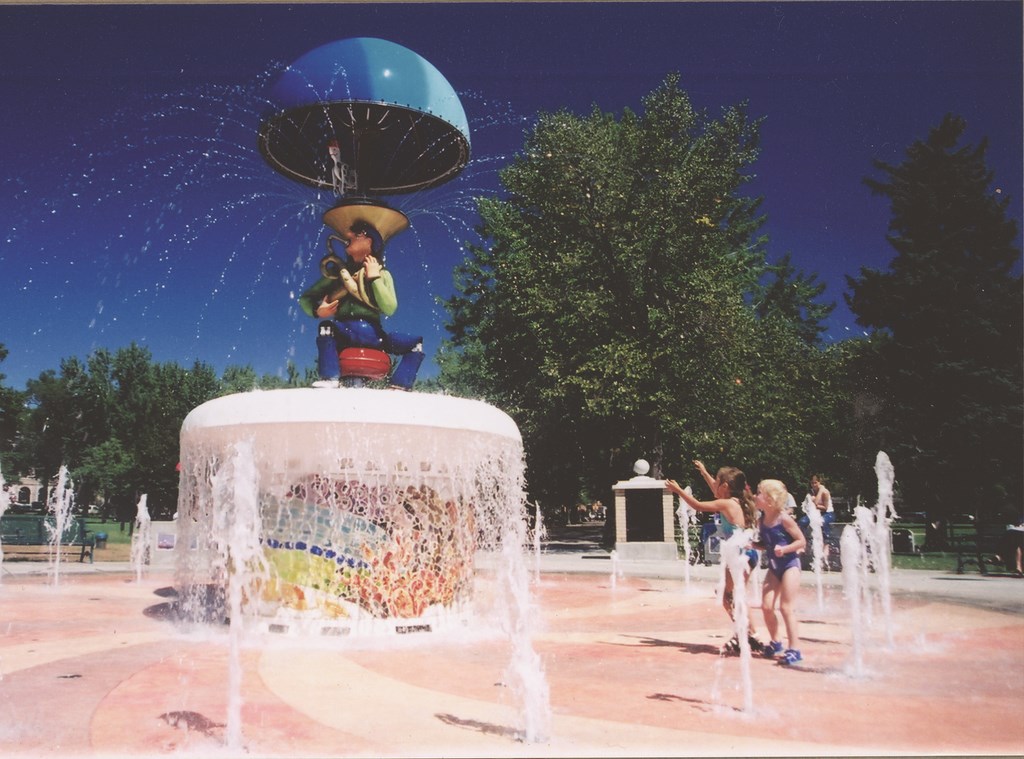 It began as the playful vision of Bob and Kat Tudor, husband-and-wife philanthropists and founders of The Smokebrush Theatre in Colorado Springs, Colo., who decided one day to donate a unique fountain to the children of their city. Now that vision, fully realized, belongs to the citizens of this sprawling town at the foot of the Rocky Mountains in the form of a dazzling water display and a folksy character named Uncle Wilber.

Multi-talented artists in their own rights, the Tudors developed the aesthetic and creative concepts but knew from the start that they would need to enlist advanced technical expertise to bring the idea to fruition. They started a search for a firm that could share their vision, and when they came to our doors in St. Louis, we at HydroDramatics were immediately intrigued – and, more important, convinced that we could make it all work.

Before the Tudors contacted our office, they’d already visited with firms that had asked them to compromise, modify and otherwise cut back on their ambitions. By the time they came to see us, they were more determined than ever to have their dream fountain built and brought a three-dimensional prototype along with them to help us see what they were after.

Constructed from such oddments as a Frisbee, broken toys and a hat, the model introduced us to a whimsical, cartoon-like character sitting in the center of an interactive fountain. To be frank, we’d never seen such a presentation before, but we all agreed that the visual aid was extremely effective in conveying exactly what they had in mind, both in terms of the physical design and the folksy style and spirit of the project. 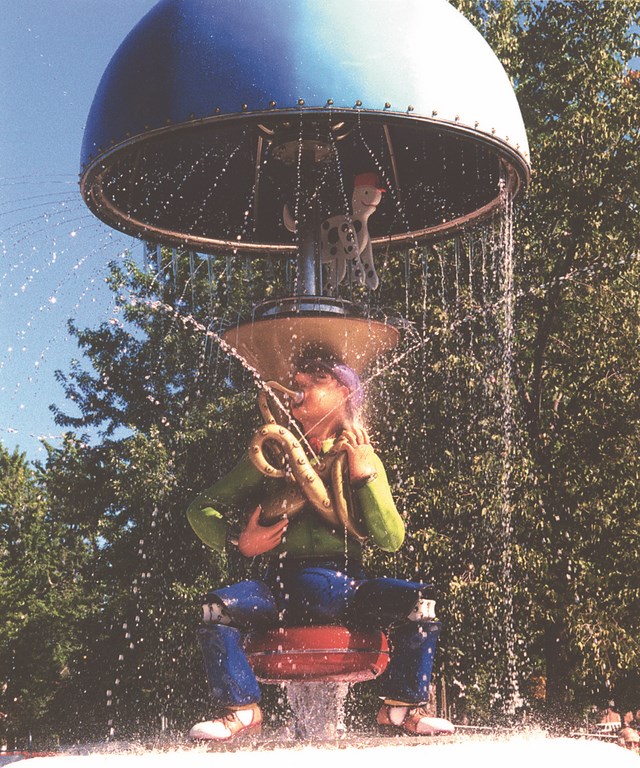 During the meeting, they told us that the fountain had gained a name during their flight to St. Louis: There’d been a mishap on the plane, and Bob Tudor had to come up with a replacement for the prototype character’s head, which had fallen off and rolled away under the airline seats. Fabricating a new head from materials at hand, he was startled to notice its resemblance to his real-life uncle Wilber, a much-esteemed teacher of visually and hearing-impaired children in Colorado Springs, and the fountain-to-be now had a name as distinctive as its design.

When the Tudors arrived with the refurbished model in hand, it didn’t take our fountain experts very long to see that the project was right up our alley in terms of technical and aesthetic issues and challenges. In fact, once Bob Friedman, who had been instrumental in designing the Gateway Geyser on the East St. Louis waterfront (at 630 feet, the world’s tallest fountain), saw the prototype, he was hooked and determined to make things happen just the way the fountain’s creators wanted.

After identifying the engineering challenges inherent in the project, Friedman and staff researched possible solutions. Taking full advantage of the resources and experience of HydroDramatics and its parent company, Missouri Machinery & Engineering Co., we created a series of detailed mock-ups and test systems to determine how to engineer and fabricate the Tudors’ designs and achieve all of the desired aesthetic and sensory effects.

One of the keys to the vision was, as Bob Tudor saw it, to capture the chaotic, ever-changing nature of water.

To that end, our engineers started with computer-choreographed nozzles around the fountain base. The nozzles would be programmed with random sequencing to spurt water in endlessly new and completely unpredictable patterns – and would need lots of mechanical support as a result. 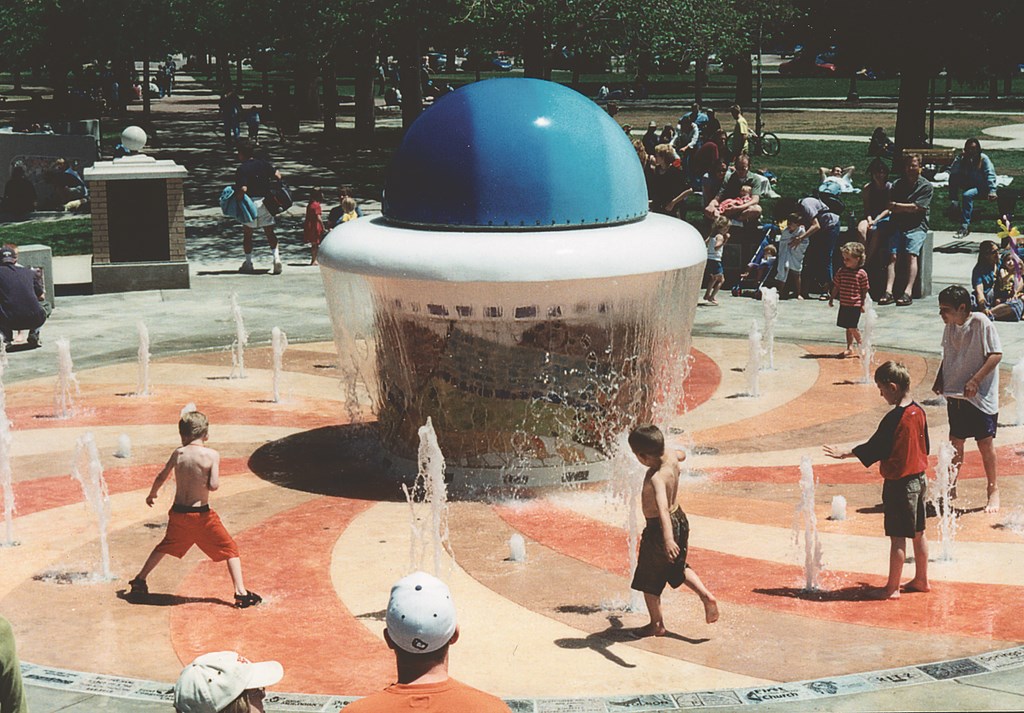 All of that equipment needed a place to hide, so the engineers designed and constructed a fiberglass vault that was to be shipped directly to the site with the equipment completely installed within, all ready to be buried and for the plumbing and electrical trades to make the necessary external connections. While such underground vaults are not uncommon for fountain projects, it is unusual to have a two-room vault with nine by 18 feet of floor space and eight feet of headroom.

As equipped, the vault includes four pumps ranging from five to 15 horsepower; two 30-inch sand filters; assorted water-treatment equipment; the system’s pipes, conduits and computer controls; and a staggering 150 valves. Before shipping, we had already programmed the main computer to control the entire system, from the digital music to the sequencing of the water sprays and the patterns of water that were to appear throughout the day.

To create the body of Uncle Wilber, the Tudors enlisted the help of Scenic Technology of Las Vegas, which built the fiberglass torso and supplied the animation systems. One key challenge: The Tudors wanted Uncle Wilber to operate in a drought-friendly way with re-circulated water. To achieve this, Scenic Technology developed and built a unique hydraulic cylinder that uses water at high pressure and a rotor-driven turbine that enables the figure of Uncle Wilber to rotate and move up and down.

In all, figuring out ways to make this all work and then fabricating the various components, programming the control systems and getting everything ready for installation in the vault or on site took what was (for our project team) a record-setting two years of effort. But the wait, we believe, was well worth it.

Set in downtown Colorado Springs in Acacia Park, the Uncle Wilber Fountain debuted to great fanfare in 2000 and is prized as the only fountain of its type in the nation.

Today, this unparalleled visual and auditory delight is a favorite with locals as well as tourists. Honors include the 2000 Partnership for Community Design Award, and the fountain also was voted Best Addition to Downtown for 2001 by readers of the Colorado Springs Gazette. The fountain even inspired a local poet, whose “Uncle Wilber” is published on the fountain’s official web site, www.unclewilber.com. 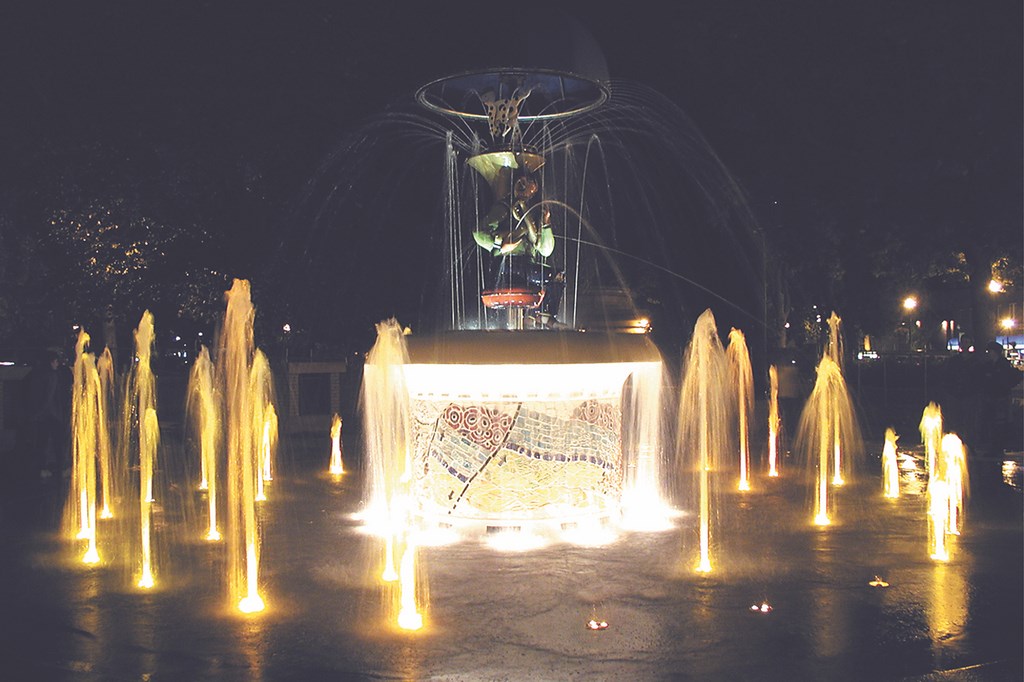 The base of the main fountain includes a beautiful mosaic-covered pedestal fashioned by local artist Steve Wood, who incorporated shards of native stones and metal interspersed with colorful tiles. The pedestal is positioned at the center of the concrete plaza, which is 32 feet in diameter.

The fountain itself is crowned by the life-size, spinning figure of Uncle Wilber, who hoists a comical tuba-like musical instrument. Every hour on the hour, Wilber rises through the fountain with his instrument, and the performance begins. Adding to the whimsy, a spotted monkey peers out over the crowd while dancing atop the tuba. While lively music programmed by a digital audio recorder plays, water shoots up in unpredictable sequences and patterns as fifty-two nozzles imbedded in the floor of the fountain’s colorful “peppermint-swirl” plaza swing into action. 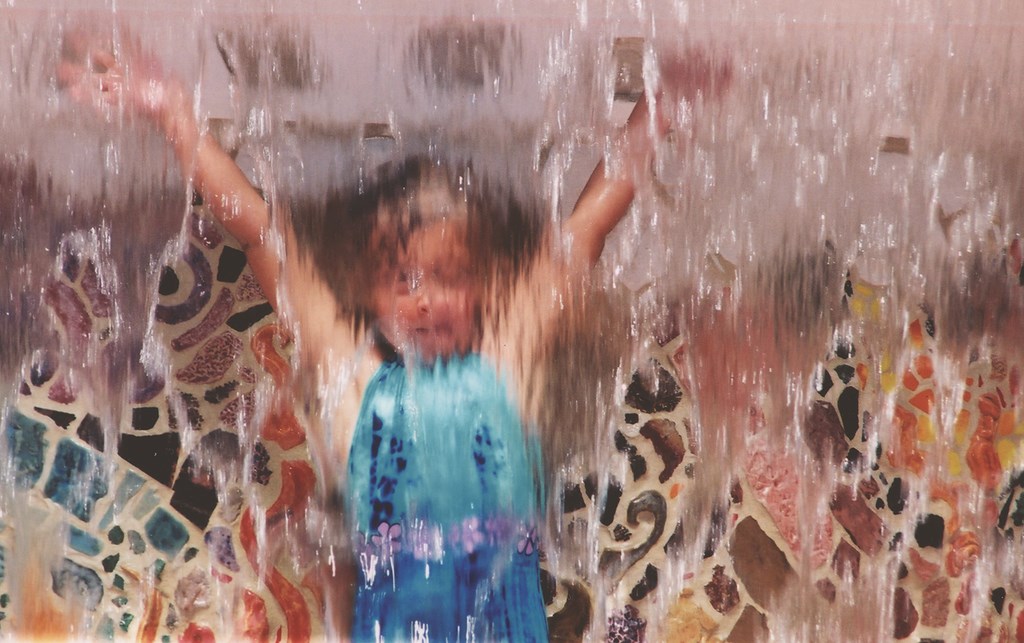 The highly interactive fountain jets mesmerize children as they try to anticipate the ever-changing pattern of the water sprays. The sequencing of those patterns constantly changes, so nobody can completely anticipate which nozzle will squirt when.

In addition to the nozzles in the floor of the plaza, the Uncle Wilber feature has another 180 nozzles that splash and spray and add to the fun. There are even several nozzles that we were able to program in such a way that, when unwittingly activated, they spray back at participants.

Even at night, the setting is magical and enthralling. Fiberoptic lighting, including 900 feet of cable and illuminators programmed and controlled along with the music and water effects, illuminates the jets of water from within, making them glow spectacularly. Then, after each hourly performance, Uncle Wilber, his tuba and primate companion slowly descend back into the pedestal, disappearing beneath a retractable cobalt dome and leaving behind a piece of public art that is beautiful by itself.

For Bob and Kat Tudor, the completion of the Uncle Wilber Fountain fulfilled a dream of providing a one-of-a-kind gift to the children of Colorado Springs. For us at HydroDramatics, it was a dream of an opportunity to take on a unique project just as the designers conceived – and to do it well.

Anne Gunn is a fountain consultant for HydroDramatics, the full-service fountain division of Missouri Machinery & Engineering Co. in St. Louis. An affiliate member of both the American Society of Landscape Architects and the American Institute of Architects, she joined HydroDramatics and became part of the fountain industry seven years ago after a 22-year career in industrial sales for the steel industry. The firm, a leading designer and installer of architectural fountains throughout the United States and internationally, is widely known for its work on such prominent projects as the St. Louis waterfront’s Gateway Geyser – the world’s tallest fountain – and the fountain for the U.S. Embassy in Moscow.