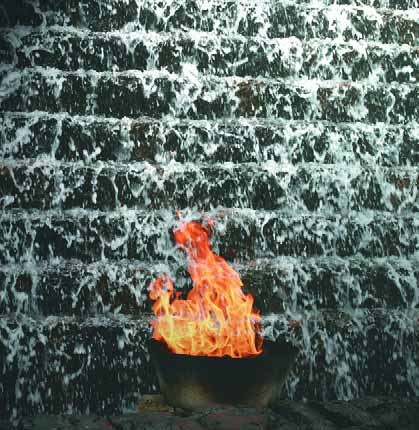 As watershape designs become ever more creative and adventurous, there’s an increased need to help clients and other project participants visualize our plans.

Indeed, presentation is a topic of great importance these days for designers from both the pool/spa industry and the landscape trades, so much so that it’s become a fixture on educational calendars and one of the cornerstones of the Genesis 3 curriculum. What has everyone excited about upgrading the way they present their ideas is that there are various good ways to get the job done.

To be sure, having the ability to draw is a tremendous asset – some would say an absolute necessity – but fortunately for those who are not gifted illustrators, there are several powerful tools at hand. In this column, we’ll look at one of the more flexible and useful of the available systems: three-dimensional computer-aided drafting (CAD).

To do so, let’s take a look at two projects I’ve recently completed in which the availability and use of this technology made a big difference.

The first project had to do with a luxury condominium complex on New York’s Long Island and was all about developing a shared vision.

The design team had been discussing waterfeatures for the lobby of the building’s leasing office and wanted something that would make a strong impression on prospective buyers while displaying the facility’s logo. Someone in the group had seen a wetted-wall feature, and they all agreed (although tentatively) that this would be a good solution for the space.

Nobody knew how to make the idea work, however, so I was brought in to develop the concept. Before long, the original sketches had morphed to a final plan that featured a free-form black granite base surmounted by a straight, 30-foot wall covered by a small flow of water. 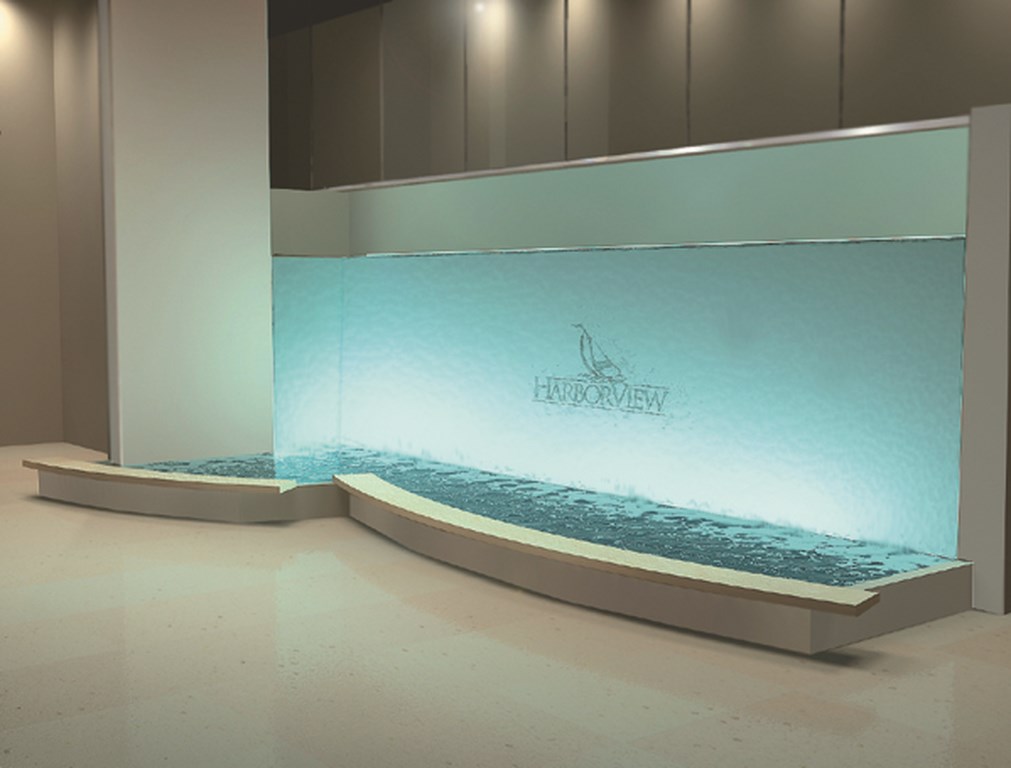 Originally, they’d discussed using a granite material for the wall, but I convinced them to switch to angled panels of glass that would be up-lit with a series of fiberoptic lights. They liked the idea, especially when I described the logo at the heart of a shimmering surface of tempered, frosted glass and the gleaming, 30-foot-long stainless steel manifold that would send water trickling down the glass surface.

The team included the general contractor, the architect, the owner’s representative and an interior design/marketing firm – and they wanted to see what the thing would look like in a format other than a basic plan or a hand-drawn rendering. I suggested doing a 3-D rendering in AutoCAD and was on my way.

AutoCAD is great when it comes to generating 3-D images from flat plans. It’s an involved (and fairly expensive) process that requires taking all the dimensional data (which the architect provided in this case) and inserting it into the system. Once that’s done, the technology enables you to generate an ultra-realistic “photograph” of specific details from any location within the space.

I have access to a fellow who’s an absolute AutoCAD wizard – Alberto Gonsalez of HKARI Studios. Once he worked his wonders, we sent an image to the architect via e-mail.

The architect then had quality prints made and circulated them among the design team and the construction staff. Immediately, the discussion shifted from whether or not the design concept was the right one to ways that the project could be fine-tuned – something that could, with AutoCAD, easily be updated as we moved along. Soon, the project was ready for installation by my good friend, Peter Cattano of Paco Pools in Baldwin, N.Y.

What amazed us was how close the finished project was in appearance to the 3-D rendering. In fact, unless you’re familiar with the project, the computer-generated shadows, textures and architectural details come across so well that it’s tough to tell what’s a rendering and what’s a photograph. You see the glint of the stainless steel, the sheen of the granite, the flow of the water and the prominence of the up-lit logo.

This sort of rendering isn’t inexpensive, but in this case it was worth every penny and resulted in a dramatic watershape that is exactly what the client wanted.

In addition to the power that 3-D renderings have in helping clients and design-team members visualize an idea, the technology can also help the watershaper more fully grasp the task at hand.

A case in point is a project I recently completed in Wellington, an affluent community in central Florida. A wealthy homeowner with a large, beautifully landscaped piece of property wanted to add a large, elaborate spa to a spot near an existing pool – something that would make a bold statement worthy of the money he was willing to invest in the project. 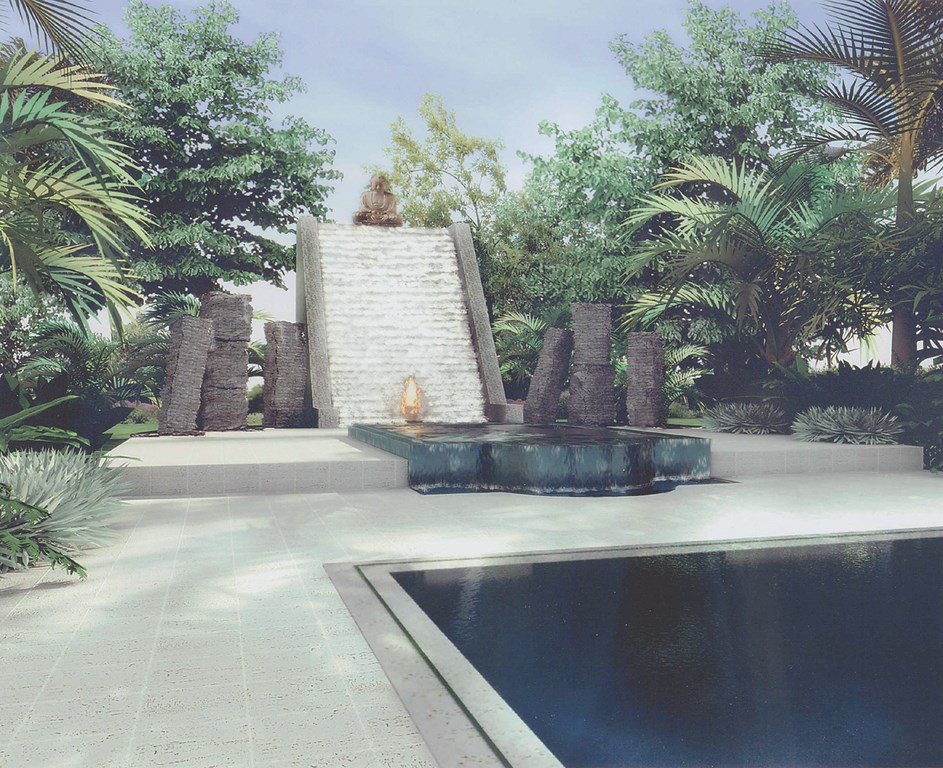 The space sat at the end of an existing patio, up a couple of steps in a large, garden area. Originally, the concept was to build the spa next to a gazebo that was to have big, therapeutic, hot-water cascades tumbling from the roof and into the spa. I did an initial concept drawing and participated in several meetings and discussions that set things on a better path: Eventually, the gazebo fell out of the plan and was replaced by a waterfeature that would serve as a visual backdrop for the spa along with a wall of greenery. 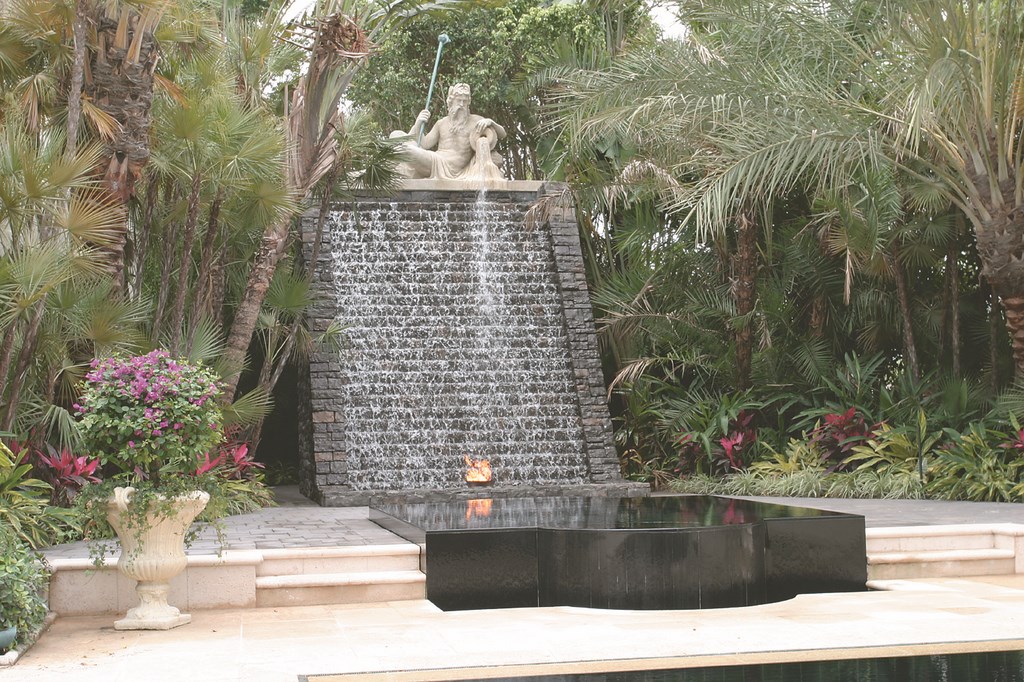 The spa itself was something special, a large, black absolute granite/glass-tiled vessel with a raised beam and a full-perimeter overflow. As for the waterfeature, the client latched onto the idea of something with a Mayan flavor, so we angled in on a stepped-temple structure with a cascade-wetted face to be topped by a sculpture.

Although I’m generally on board when it comes to making my clients happy by giving them what they want, I was extremely concerned that this particular set of added features would really be overkill. I was particularly worried that the columns would be just way too much for the space and only slightly less concerned that the sculpture would throw the structure out of balance (not to mention the issue of a strong Asian element intruding on a Mesoamerican theme). Still, this was what the client wanted, so we proceeded with our work.

To make certain we all knew what was taking shape, I suggested commissioning a set of 3-D AutoCAD renderings. The client agreed, and I called once again on my AutoCAD friend to input all of the plan data and generate separate drawings of the structure, the existing pool and the decking from two distinct angles.

As almost always happens when a client really begins to “see” a designed space, he became excited about the project all over again and we immediately began talking about ways to adjust the design. Having the renderings was a help to me as well, because we’d gone through so many iterations that it was good to have something in hand to help me get a firm sense of the direction in which we were now heading.

Immediately, the renderings put my mind at ease about the effect the sculpture would have. Almost as quickly, the client saw that the columns just didn’t work and that removing them from the program would greatly increase the visual impression made by the waterfeature while giving the overall composition a sleeker, less-jumbled look.

Best of all, we could plainly see that the raised granite-and-tile spa and rough natural-stone steps would blend beautifully with the green surroundings and provide the client with exactly the spectacular backdrop he wanted.

As the project moved forward, the client made some other changes, including selection of a mythical River God instead of the Buddha – to my mind a more appropriate choice if only for thematic reasons. Truth be told, I probably would not have included any sculpture atop the waterfeature, but the renderings had eased my concerns to the point that I knew it would look fine, whatever the choice he eventually made.

I was fortunate inn this case to be working with another quality watershape contractor, Doug Hackl of Hackl Pools in Lake Worth, Fla. His execution of this highly involved project was outstanding.

For both of these projects, the availability of 3-D AutoCAD renderings gave us all a baseline for understanding of how the projects would work in their respective settings, and I can’t say for certain whether the results would have been so satisfactory had we not used this tool. At the very least, I suspect the path taken to the final results would have been much longer and probably more costly.

Certainly, not every situation calls for such an extreme form of presentation, but in these situations, CAD technology was extraordinarily helpful – and worth a long look if anyone on the design team or, more important, the client is having trouble visualizing the outcome.