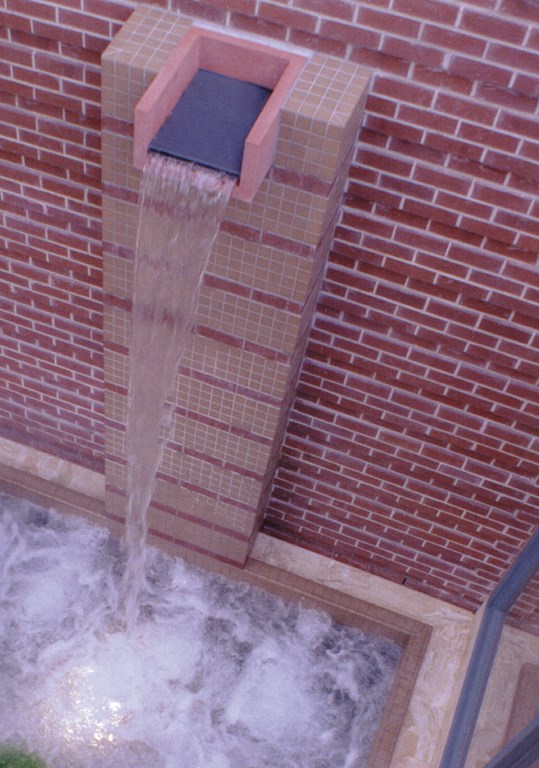 Given the way bodies of water interact with gravity, a great deal of the personality of any swimming pool is set by the flat surface of the water and its reflective qualities. In our work, we’ve found a variety of ways to capitalize on that flatness by creating focal points that are distinctly vertical in nature.

In fact, we’ve found that working on the “y axis” and focusing on upright structures as diverse as arches, walls, columns and waterfalls can yield a variety of stunning visual effects: Exterior spaces and vistas can be connected or distinguished, architectural shapes can be contrasted or echoed, shadows or reflections can be cast, and privacy or openness can be enhanced.

The fact that these effects cut both ways makes them appealing to a custom builder who strives to give clients something unique and lets the characteristics of the individual setting drive the design process. It makes the work more challenging, yes, but it also makes it more fun and rewarding.

In many cases, the vertical elements we use can be subtle and retiring – a slightly raised bond beam, for example, or a small waterfall. More often than not, however, we gravitate toward the bold and declarative by integrating water into architectural forms and creating dramatic and unusual waterfeatures. Whichever way you choose to use vertical elements in your own designs, one point is clear: Exploiting the vertical dimension adds depth and character to the work – and affords both client and designer a broad set of aesthetic options.

Working with vertical elements has always come naturally for us at Texas Pools. We work almost entirely with a high-end clientele, mostly residential, and these people want something truly special in their watershapes.

We’ve found our answer to that challenge in architectural continuity: By borrowing vertical elements from their homes and working with the intrinsic drama of tall structures, we really excite some of these upscale buyers away. And make no mistake, there is something distinctly Texan about this approach to design. The Lone Star state has a reputation for bigness in all directions: big spaces, big cities, big money.

You see this proud Texas attitude in the style of homes as well, with many of them boasting neoclassical facades designed to impress with their pillars, arches, columns and colonnades. Even in homes that are relatively modest in socio-economic terms, we still see many of these same elements – if only to a lesser degree.

Many of our clients have traveled extensively in Europe and Asia and have been influenced by what they’ve seen. As a result, we’re often asked to provide Greek, Roman or Moorish details in the designs we do, sometimes on a grand scale. It’s part of the regional fabric, too: Our public buildings often feature classical Greek-inspired columns, Roman-design arches, Moorish-style quatrefoils and Renaissance-type domes.

As watershapers, this means that our clients come through our doors with elevated expectations – both literally and figuratively. And we exploit those expectations in the way we’ve set up and lit our offices and showroom to feature many of the projects you’ll find in the photographs seen in this article. With very few exceptions, these projects contain impressive vertical elements.

As mentioned above, what’s so interesting about vertical structures is that they have an ability to connect and divide at the same time. Arches, for example, suggest a threshold at the same time as they offer a passage. Through that barrier, we’re able to see what’s on the other side – and things on one side are effectively linked to things found on the other.

Particularly when used to mimic the architecture of a home, columns and arches near a watershape connect interiors and exteriors – a link made even clearer by the fact that large expanses of glass are usually all that stands between a home’s interior and its yard. When seen through these glass walls, the vertical structures outdoors draw the eye the instant anyone walks into the room.

Better yet, these vertical accents can be used to house a variety of water effects – everything from simple sheeting waterfalls to exotic rainmakers. Vertical structures also offer you opportunities to explore and exploit dramatic lighting effects or create and play with shade. They also let you frame views of spaces beyond, break the horizon, add visual interest to flat spaces, complement plantings and trees – the list of possibilities is endless.

To demonstrate some of this vast potential, we’ve selected the handful of projects seen here. Classic or modern, small or large, we offer them to support the notion that the vertical dimension is a critical one – one that should be considered and exploited by designers who are after something truly special.

And rest assured: You won’t have to move to Texas to find clients who’ll want you to put these ideas to work.

Walls adjacent to water – whether they’re part of an adjoining structure or constructed as part of the watershape – can lend a sense of privacy and enclosure to a setting. They also provide the designer with an opportunity to create a variety of waterfall effects – and a great way to generate continuity between the vertical hardscape and the water’s horizontal surface.

A warm, old-world mood, for instance, is created by this simple fountain (left). Mounted on a concave, seven-foot tiled wall tucked between low walls at the end of the pool, the scupper and urn occupy a space with a bath-like sense of privacy amid a stand of towering pines. Quite a different effect is achieved by opening the water and wall to the surrounding space – as in this case (middle left), where a curtain of water “laminates” the center section of a tile-and-stucco outer wall that runs the length of a formal, rectilinear swimming pool. 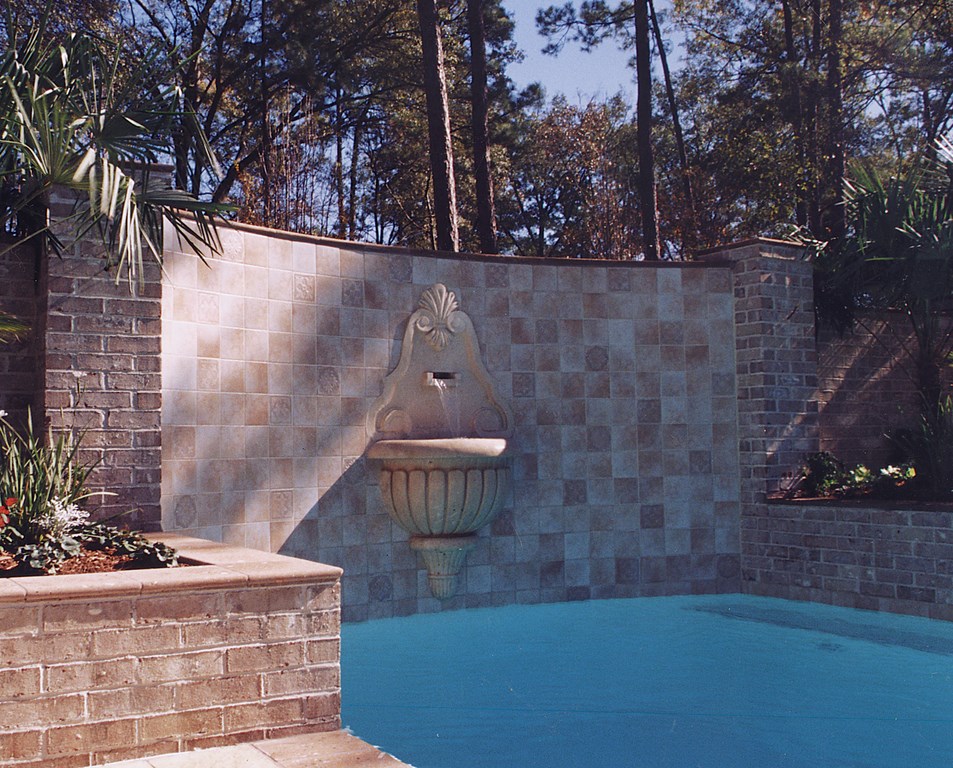 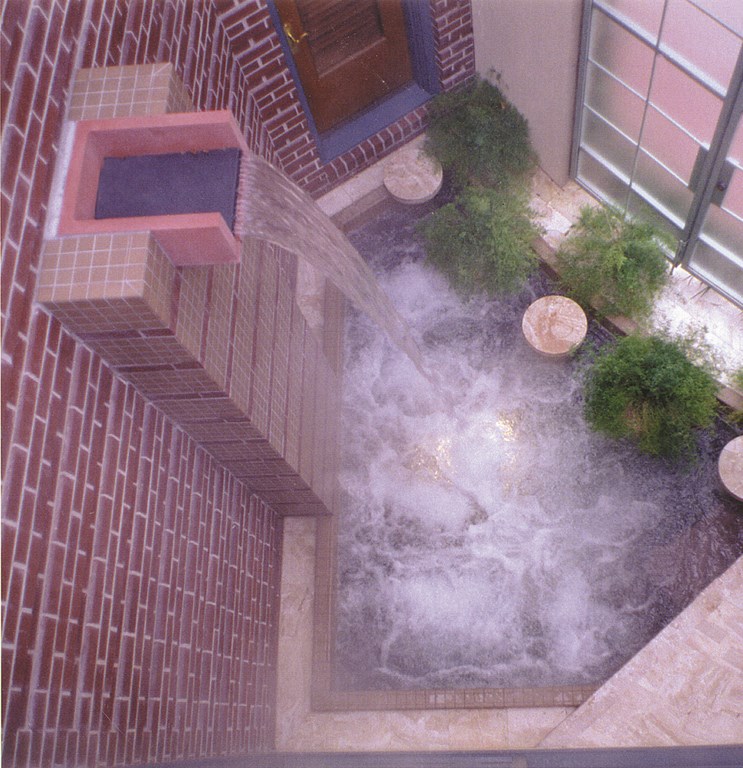 Less subtle in effect is this 10-foot waterfall (middle right), which accentuates the vertical geometry of the exterior windows and walls of a modern-style home. Space for the spa was created during a remodel of the owner’s master bathroom. Sliding-glass windows now open into a small atrium designed both to expand the bathroom suite and create an interesting transition to the space beyond – all while maintaining a sense of privacy. Viewed from the deck above, the falling water creates a wonderful, tuneful effect as it falls into the pentagonal spa below (right).

Found in many of the world’s grandest structures, columns make statements. From the Parthenon in Athens to the Lincoln Memorial in Washington, designers have long used these vertical elements to impress all comers.

We worked with a dramatic variation on this towering theme in a waterfront estate where we set up a series of 15-foot-high columns to serve two specific visual purposes: When viewed from the home (left), they frame the scenic river flowing next to the property’s grassy banks; from the water (middle), the columns harmonize with and enhance the grand architecture of this multi-million-dollar Texas estate. 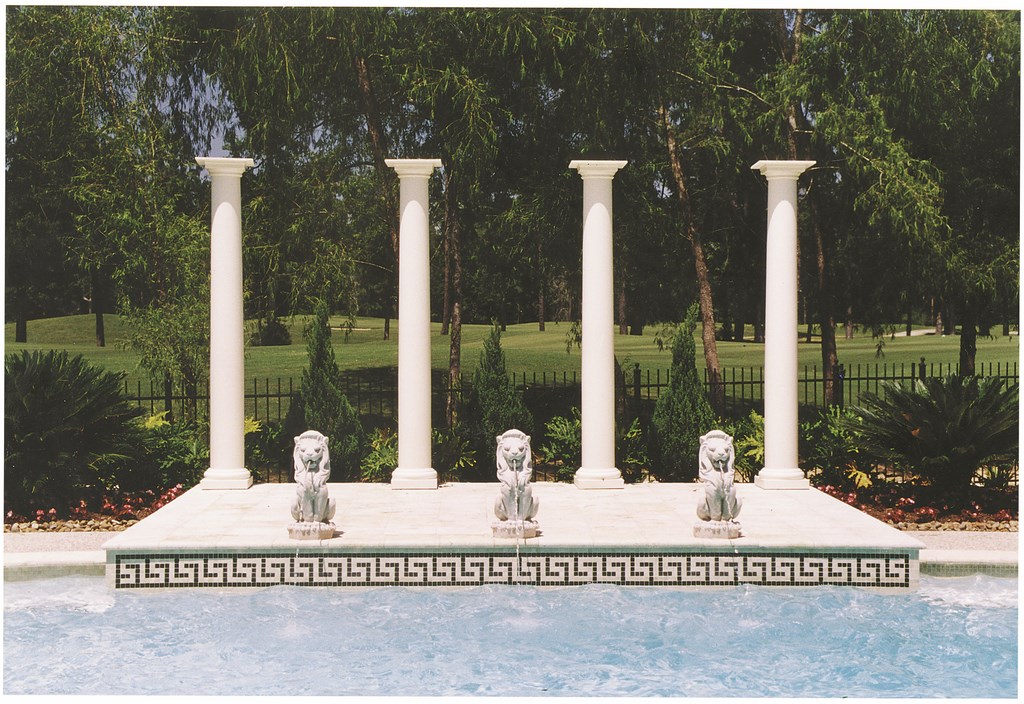 On a somewhat smaller scale, columns are used as a backdrop for three lion fountains that stand watch on the upper sunning area of a classic, Grecian-style pool (right). The four columns carry the classic look into the vertical dimension and lead the viewer’s eye to the lush landscaping of an adjacent golf course.

In our work, we make extensive use of shade structures as a way to echo the architecture of homes and adjoining features, contrast the flat hardscape and water with vertical lines and give bathers a break from the often-searing Texas sun.

In one case, we set up a Spanish Colonial-style gazebo to tower above the flat rocks of a naturalistic waterfall that feeds a small man-made lake (left). Located at a community center in an upscale housing development, the structure provides a peaceful retreat for one and all. 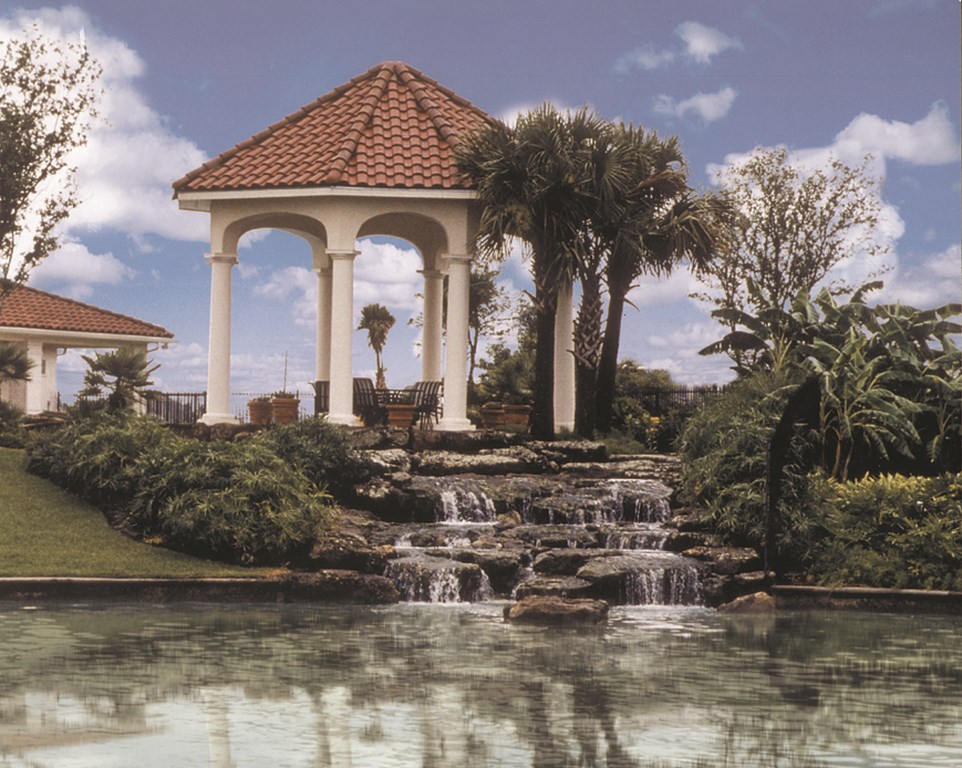 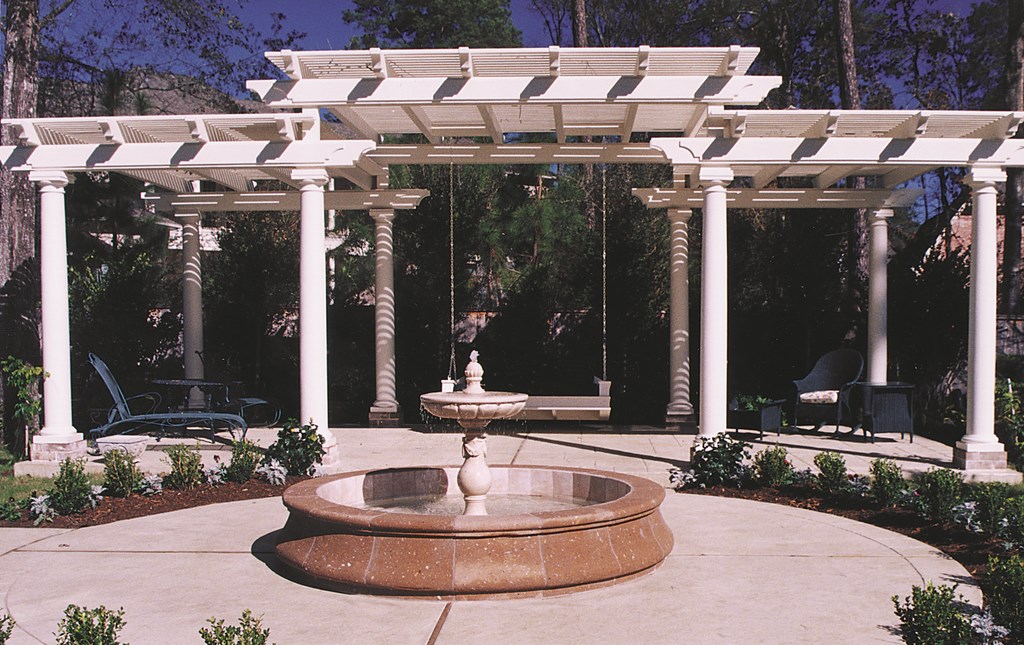 Shaded areas can also be incorporated into swimming pool designs to give bathers a cooling break. In one case, an arched trellis provides a visual balance with the square spa on the opposite side of the pool (middle) while also framing the lush backdrop of landscaping. But these shade structures don’t need to have solid roofs to do the trick. Here, for example, an open arbor casts moving shadows behind and around a simple, eight-foot fountain (right).

Commonly known as “rainmakers,” these vertical features combine arches with falling sheets of water – and represent the most unique and interactive of all the vertical components we’ve used so far. These structures can be employed to tie the watershape directly to the architectural features of the home – and to frame and gently distort the view of nearby landscaping. Even more, they look great and are lots of fun for bathers and viewers alike.

Special perforated nozzles mounted in the structure create this water effect. Achieving an even flow from one side of the feature to the other is essential, so you need to pay special attention to hydraulics. And if you really get into it, multiple rows of rainmaker nozzles can be used to add depth and complexity to the falling sheets. 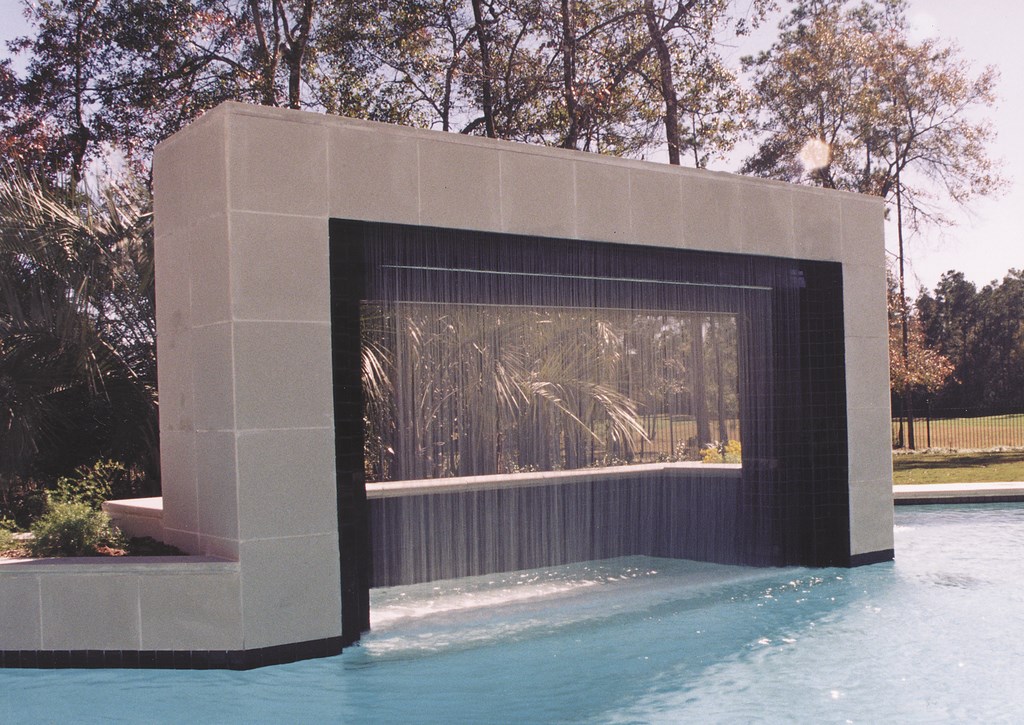 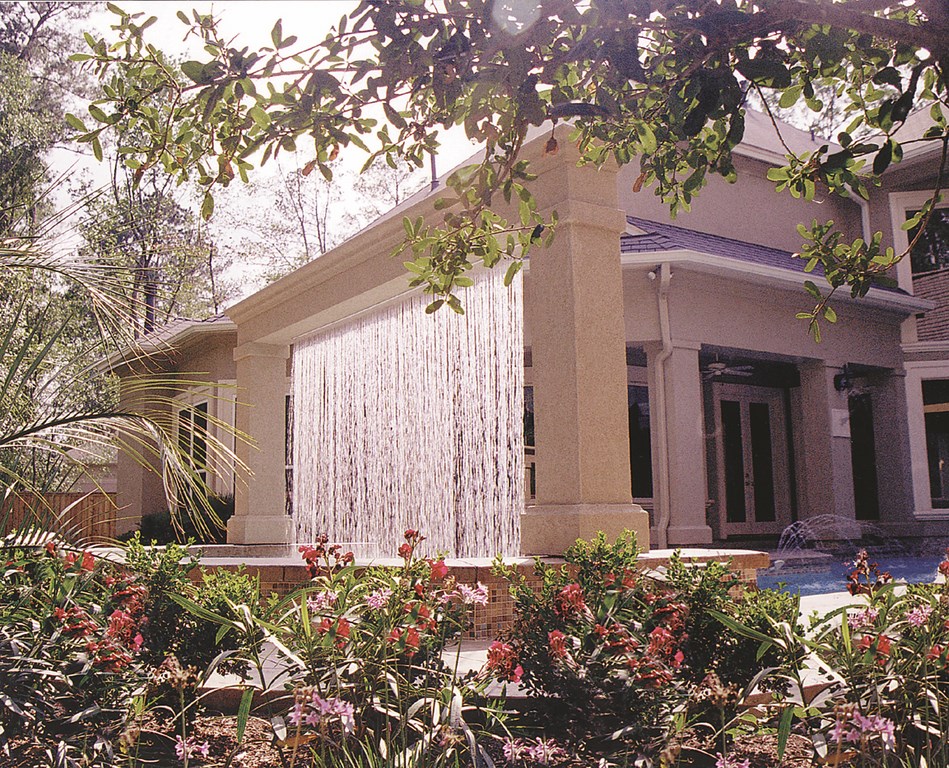 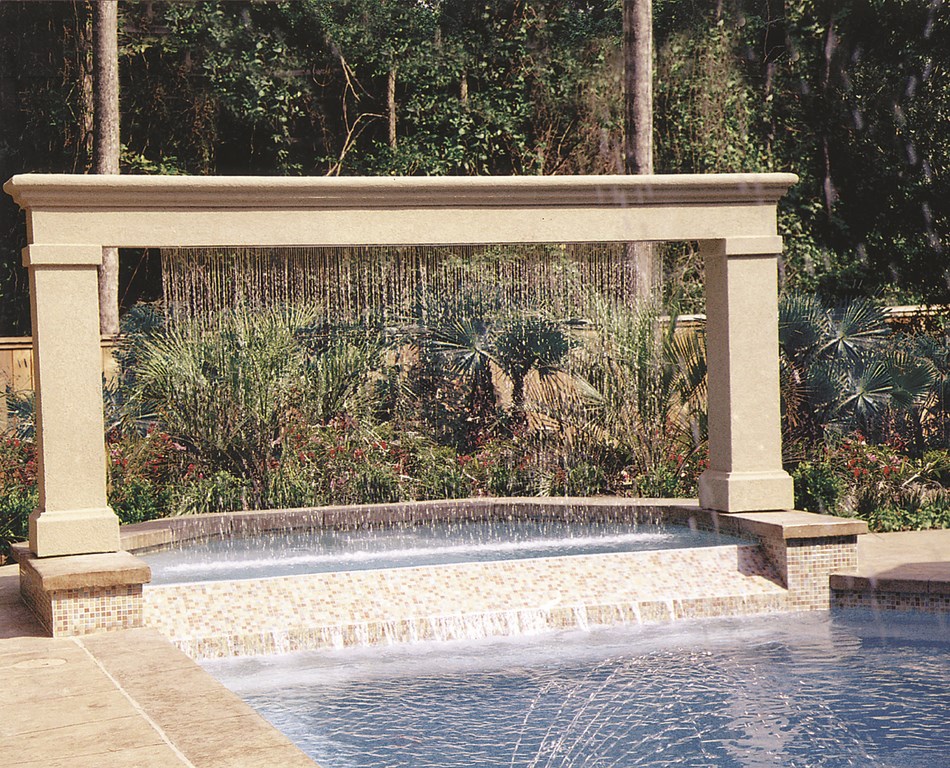 The bold yet simple geometry of one of our rainmakers mimics the exact size and design of the fireplace inside the home, creating a “fire and water” motif (left). Three rows of rainmaker jets have been installed in the free-standing 7-by-14 foot cast-stone-and-tile structure.

By contrast, just a single row of rainmaker jets is housed in another stucco structure (middle) designed to mirror the architecture of the house. Here, water falls from the rainmaker into the spa and then into the pool via the tile-covered beveled edge (right). Again, the structure frames the view of the landscaping beyond.

Paul Ryan & E.C. Medley are co-owners of Texas Pools in The Woodlands, Texas, and have been working together in the construction of custom residential projects for an affluent Houston-area clientele for more than 20 years. They didn’t start out as partners, but they worked the same market using many of the same sub-contractors. Recognizing a common approach based on quality work, attention to detail and innovative design, they merged operations to form their current company, which now builds more than 150 pools each year and operates offices in The Woodlands and Spring, Texas. Many of the firm’s pools have received NSPI Design Awards and have appeared in a variety of trade and consumer publications.