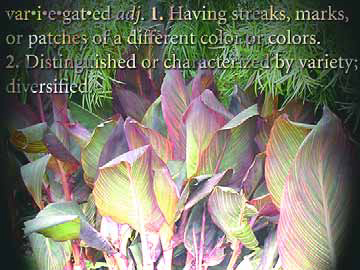 Out of all the varieties I mentioned in last month’s discussion of maples, my favorite was (and still is) the variegated maple. Beyond the simply spectacular nature of that particular tree, what I love most about them is their variegated leaves.

This is clearly a personal preference. In fact, I’ve come across many clients and friends who have a specific disdain for variegated plants – something about them must remind them uncomfortably of the ’70s in some way. But by discounting this group of plants as potential selections for a garden palette, I believe these people are missing out on a great opportunity.

I often think of variegated plants as the illusionists of the botanical world. For one thing, they allow me to add colors other than green to a design in unusual ways. For another, most of them have the potential to lighten up dark areas (as is the case with white-variegated shade plants) or, on the other end of the spectrum, to add splashes of color in dramatic ways.

With green as the basic backdrop, variegated leaves can be white, cream, yellow, blue, gray, bronze, red or almost any other color imaginable. I’ve even found a few just recently that have purple tinges to them, and some don’t even have green in them at all.

The point is, variegated plants are quite versatile and can easily be used to add depth and dimension to an otherwise flat plant palette.

For the most part, we think of plants as a means of adding color, texture and form to our designs. With variegated plants, however, not only do we hit the mark with all those conventional functions, but we’re also able to add light and work with greater detail in our color palette.

Here are a few of the ways they can be used to go above and beyond the usual:

Just as darker leaves will make an area appear shadier and more recessed, the variegation can trick the eye into believing that the area is not quite as canopied or shady and can actually bring it forward. This trick is perfect for an area where few plants will grow and you want to create some variety. These plants are great in shady pond environments, for example, and may enhance or play with reflections of light on the water.

[ ] Add a streak of color. Plants such as variegated flax are quite linear (and, as I call them, “strappy”). Using a variegated, strappy-leafed plant can break up a flat or monotonous appearance, particularly in a mass planting. I also recommend using a couple of different varieties together to lend a greater sense of variety and depth.

[ ] Create more depth and dimension. If your entire plant palette is green, adding a red, white or any variegated plant will not only break up the monotony, but it also adds another “dimension” because the use of light colors as the variegation will draw that particular plant closer to the eye. (Similarly, a dark variegation, such as red or bronze, will cause that plant to recede into the landscape.)

There’s a lot more to color theory and use than I can cover here, but suffice it to say for the moment that these approaches really do work to give a greater and helpful sense of depth to garden spaces. Just one caution: As with anything, a dramatic design touch works best when used in moderation and loses its magic when overdone. In other words, a solid mass of variegated plants will not show them at their best!

Let’s take a look at some of my favorites among variegated plants: 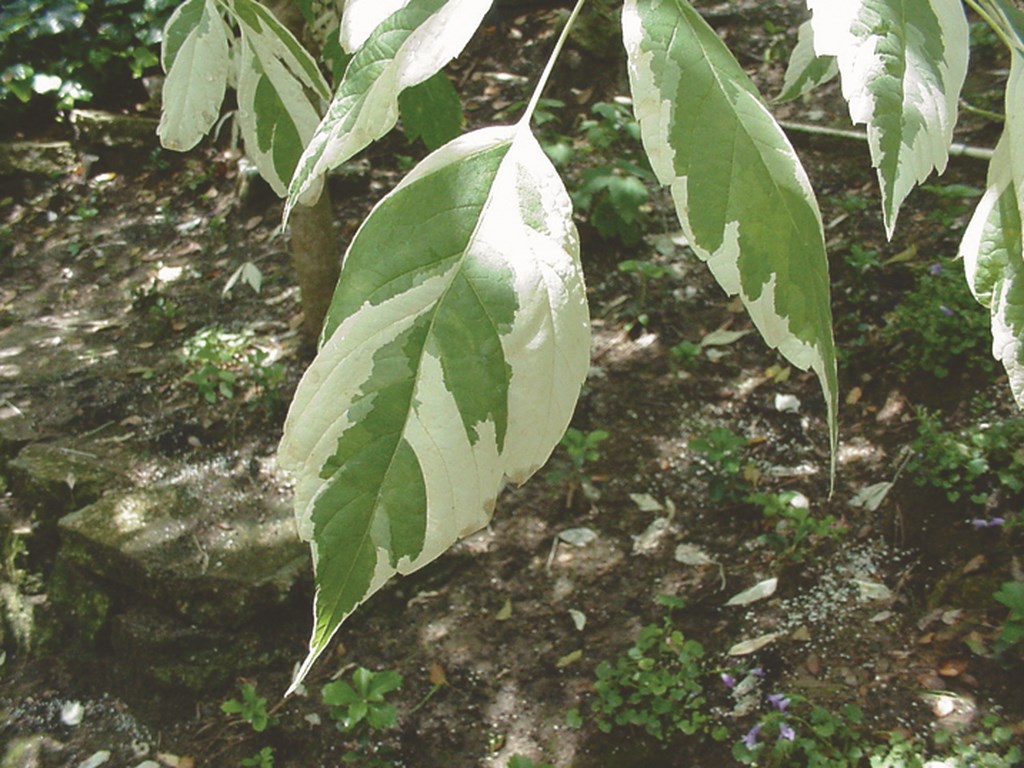 * Acer negundo ‘Variegatum.’ As I discussed last month, this is a great part-shade tree with stunning, white-variegated leaves and spectacular weeping seed pods. It can accent an oak tree quite well, for example, or bring light to an otherwise dull, shady spot. This tree is difficult to find, unfortunately, but the ‘Flamingo’ variety can be a reasonable substitute.

* Aspidistra elatior ‘Variegata’ (Cast Iron Plant). Aptly named, this stalwart will grow in the darkest, most shaded areas (within reason, of course). The variegated version has white streaks adorning dark-green leaves, and it’s a great choice for areas where little else will grow. 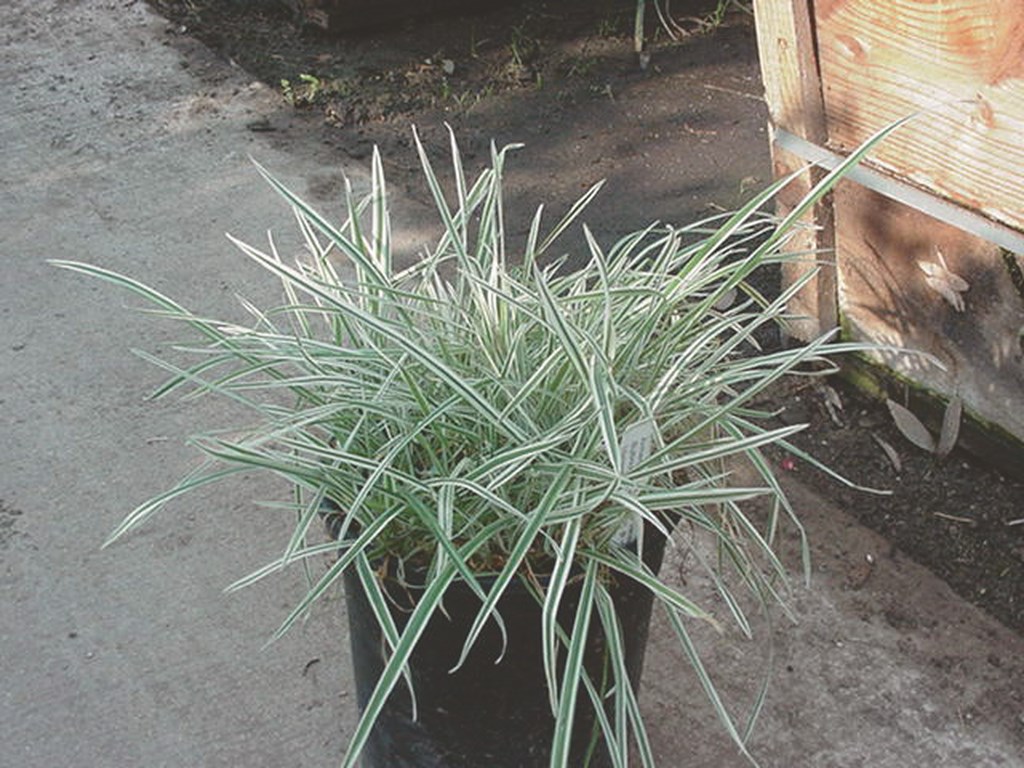 * Arrhenatherum elatius bulbosum ‘Variegatum’ (Bulbous oat grass). This is one of my new favorites – a bluish-green grass variegated with white that grows to about a foot high and wide and is suitable for use in either full sun or partial shade. 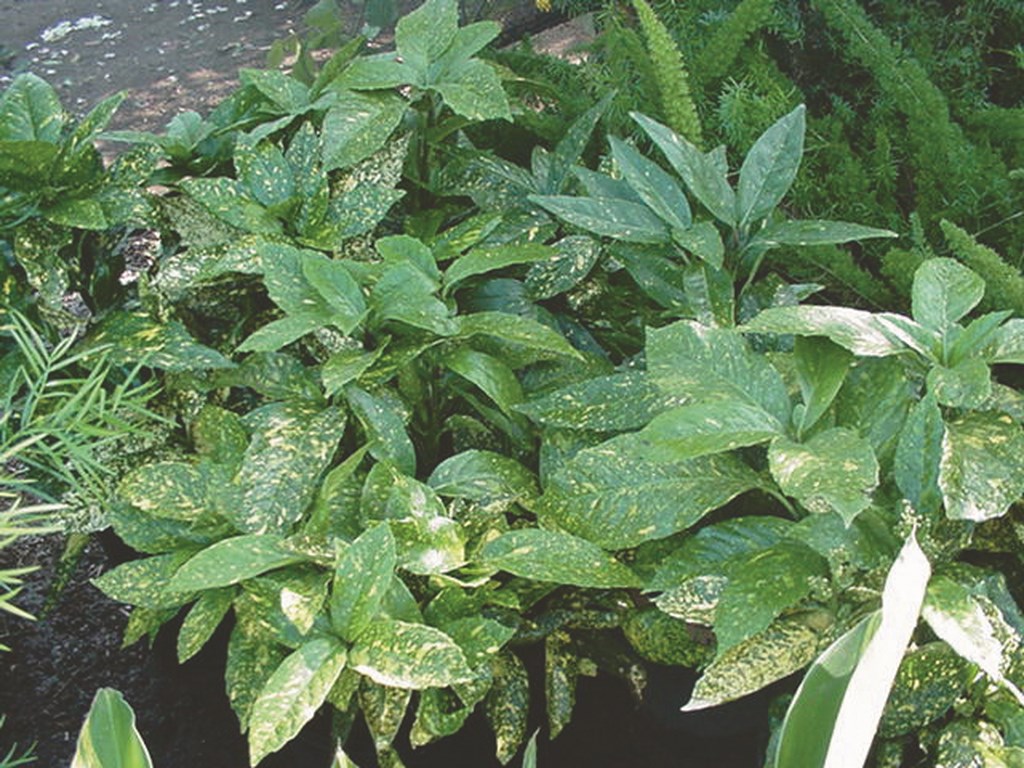 * Aucuba japonica. Distinctive yellow spots make this a unique shrub – one that looks as though someone accidentally splattered paint on the leaves. It can grow easily to a height of six to ten feet and about that wide and is great for planting in partial or full shade. This variety has worked especially well for me as a background filler against dark-green leaves.

* Baumea rubignosa ‘Variegata.’ When you need a very upright green grass, this is a great choice. I’ve looked for but never found an unvariegated variety, but I’ve also noticed that its subtle, creamy-yellow stripes blend in well. The plant forms tight clumps that grow to about two feet high, and I recommend using it as a gentle accent rather than as a centerpiece or something you’d like to have stand out.

* Dianella tasmanica ‘Variegata.’ This strappy-leafed plant looks quite similar to Agapanthus (or Lily of the Nile) in appearance and growth habit, but its leaves are slightly narrower and are more pointed at the tips. I’ve just started using this variety and find it makes a great substitute (when your client wants something “different”) for the all-too-common Agapanthus. It makes a great accent near a watershape with its small blue flowers, which are followed by blue berries.

* Lamium maculatum ‘Beacon Silver.’ As ground covers go, I see this one as offering the most visual bang for the buck. The light-green leaves are splashed with white and produce small pink flowers. Beyond the fact that it brightens up any dark area, it works beautifully when paired with the green leaves and purple flowers of Campanula muralis. Another variety, ‘White Nancy’, has white flowers – perfect for clients who hate pink.

* Hedera. The name sounds sophisticated, but it’s just plain Ivy. There are so many different varieties of this plant, most of which are dreaded by all sensible people, but if properly maintained and contained, variegated ivy offers great coverage for large areas and is particularly useful on slopes because of its unequaled soil-binding abilities. On a much smaller scale (and if planted among solid-leafed shrubs and trees that set it off), small patches of variegated Hedera can be the perfect accent and brightener for any garden.

* Hosta. I have only been able to use this plant in the mountains of southern California because it’s an annual down in Los Angeles. I wish that weren’t the case, because this group of plants offers some of the best selections among variegated leaves known to mankind. (To see some great examples, check out some of the catalogs by Wayside Gardens and other growers who supply perennials.)

* Hydrangea macrophylla ‘Variegata’ or ‘Tricolor’. Though hydrangeas are spectacular by themselves, sometimes the combination of leaves and flower color gets lost in a darker space. The variegated version of this plant works best when placed among darker-leafed selections. 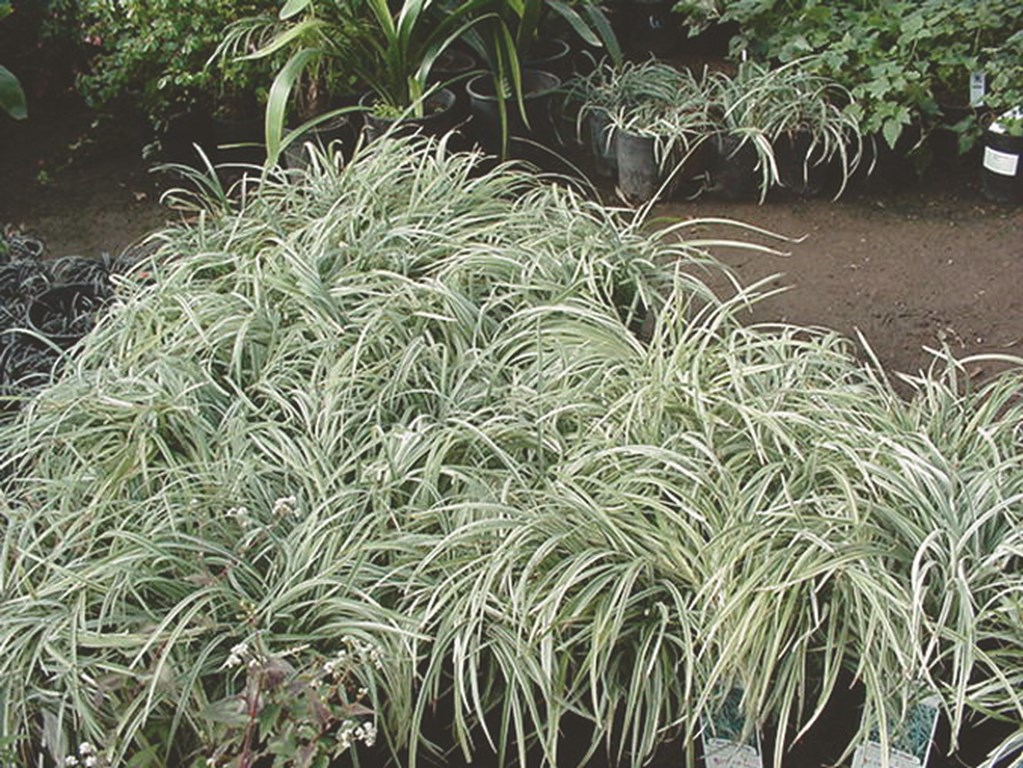 * Liriope spicata ‘Silver Dragon.’ I’ve used this strappy-leafed “grass” extensively in shade gardens. It grows to about 18 inches high with its flower spikes and certainly accents and brightens darker areas. This particular variety has white variegation, but others have yellow and gold stripes. 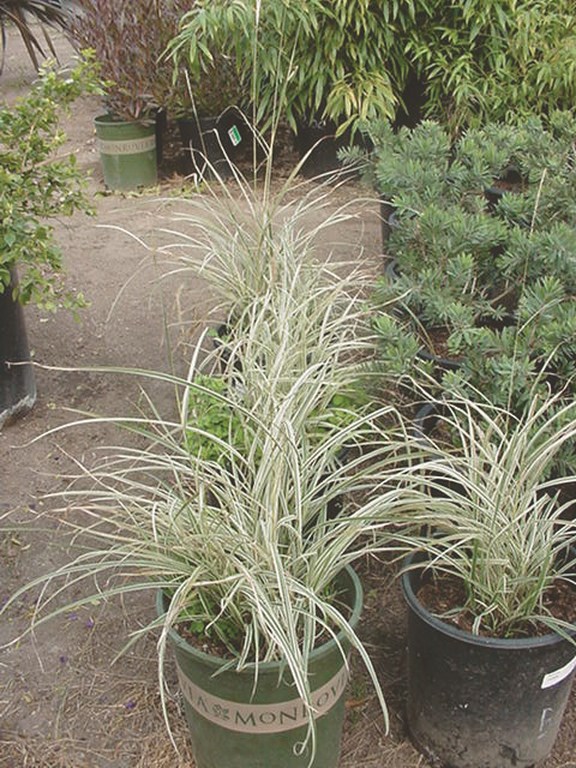 * Miscanthus sinensis ‘Morning Light’ and ‘Zebrinus.’ These striking grasses can grow to six feet tall and about three to four feet in width. ‘Morning Light’ has white stripes the length of the leaves, while ‘Zebrinus’ (also known as ‘Strictus’) is striped horizontally. Both are quite eye-catching and sure to stand out when massed with darker leaves. 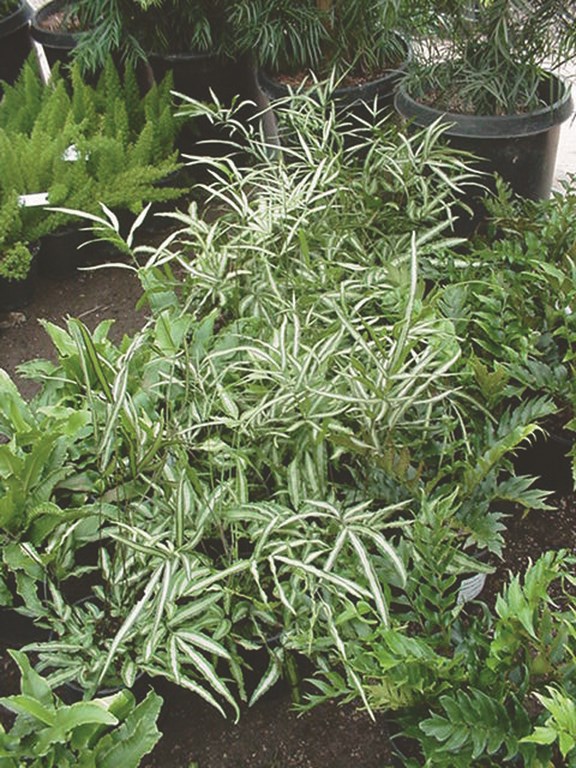 * Pteris quadriaurita ‘Argyraea.’ I’ve found only a few variegated ferns that work well. This one has finger-like fronds, comes in a range of variegated colors (most commonly white) and can grow to four feet tall and wide. It’s quite showy, especially when set off against other shade plants. (The Wayside Gardens catalog covers some unusual varieties.)

* Phormium tenax (Sundowner, Guardsman, Maori Queen, Duet and more). I grew up hating flax almost as much as roses, but I’ve since learned the value of these striking plants and use them whenever possible. 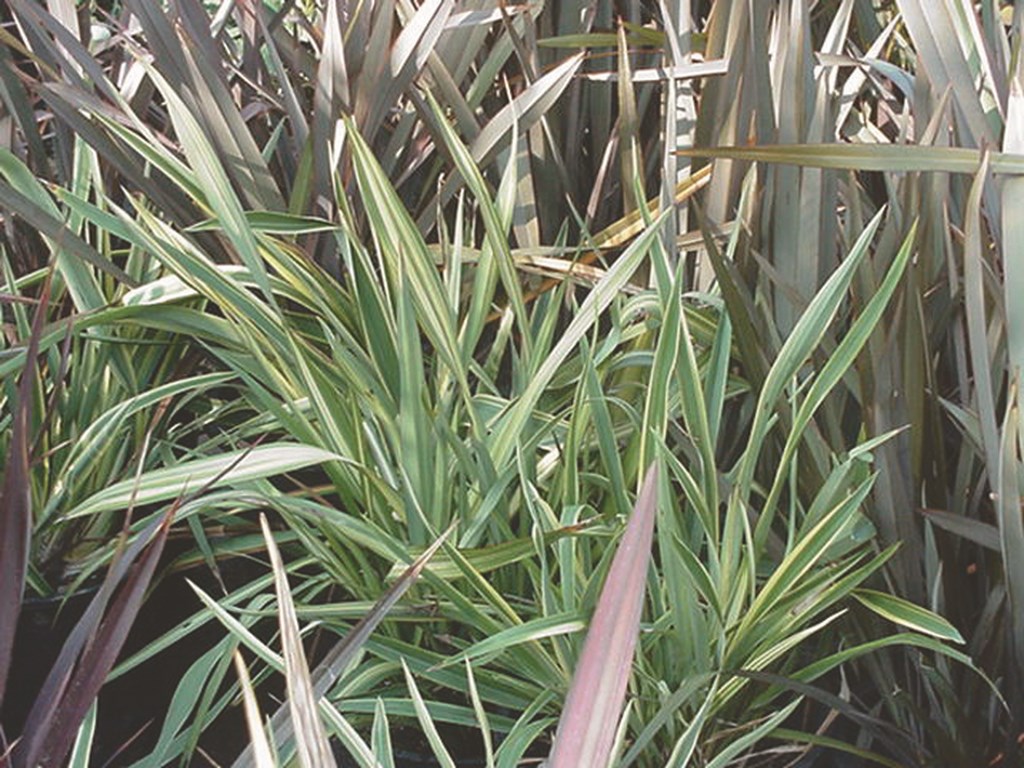 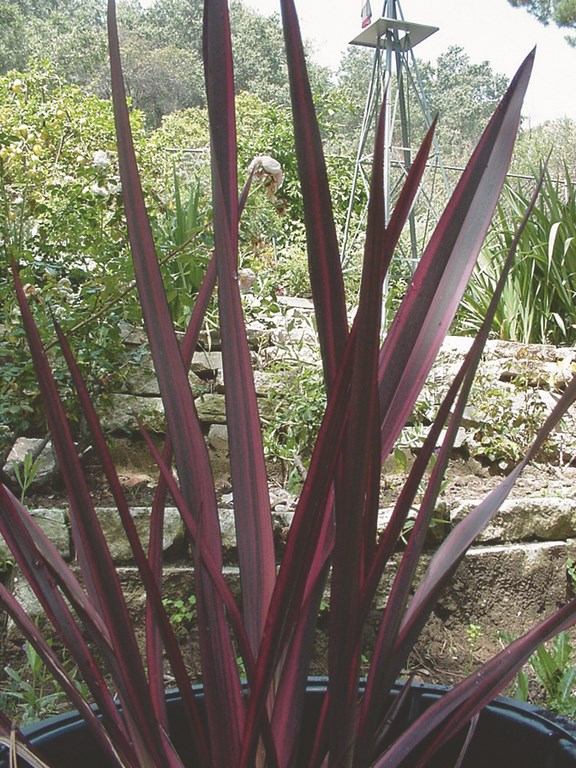 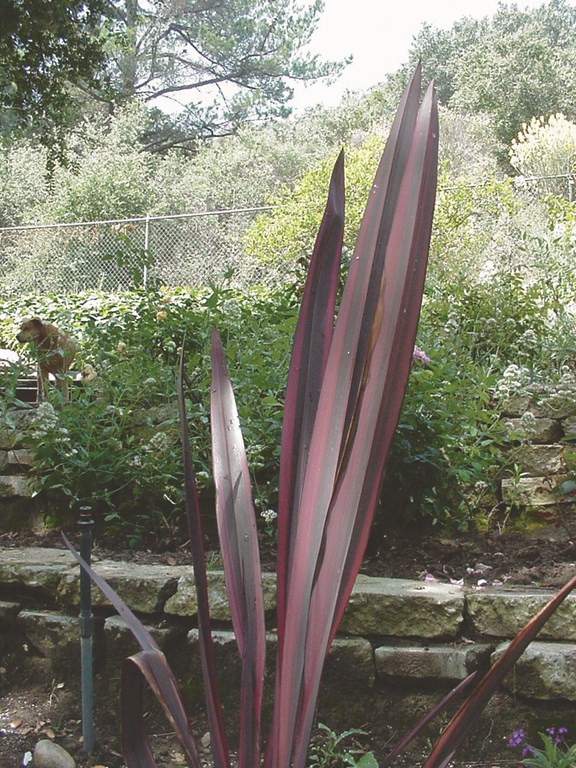 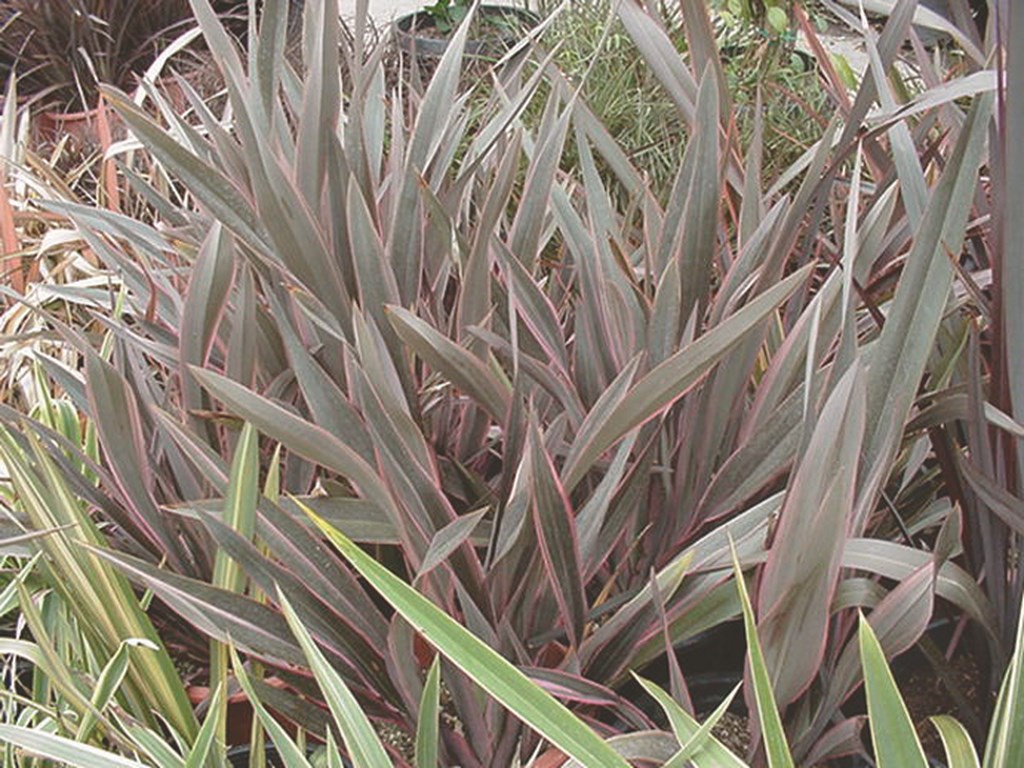 At one time, they were available only in solid green and solid bronze, but the varieties available now range from the cream and green of ‘Duet’ to the cream/yellow/orange/green/red of ‘Sundowner’ (which is sometimes likened to a Tequila Sunrise). There’s also the bronze and fire-engine red of ‘Guardsman,’ and I’ve even planted one called ‘Pink Stripe’ that is bronze with pink stripes down the sides. The variegation of flax also makes for a spectacular nighttime display with uplighting at its base: The lighter variegations tend to take on a translucency at night that makes them quite special when illuminated.

* Pittosporum (tobira ‘Variegata’ and ‘Marjorie Channon’). Most of the Pittosporum family is quite familiar to many of us. The “tobira” varieties especially were used throughout the ’70s and are still standard in many gardens as filler plants. I’ve used tobira ‘Variegata’ where there are too many large, plain-green trees and shrubs. It can grow up to 15 feet tall and probably as wide (although they’re usually kept to about six feet wide) and have medium green leaves accented with creamy white variegation. More recently, I’ve been using tenuifolium ‘Marjorie Channon,’ a medium-to-large shrub with thin, dark-brown branches and small leaves that have a lacy appearance. The contrast of the medium-green leaves with their creamy-white variegation against the dark bark is quite unusual – a conversation piece for any garden.

Next time, we’ll explore other ways to lighten up darker planting palettes through use of varieties with gray foliage.