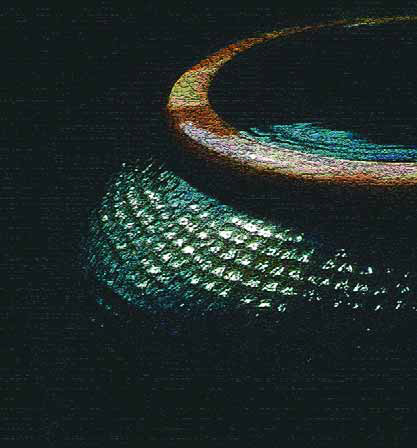 It’s unusual to think of such a wonderfully decorative watershape in this way, but the one featured in this edition of “Details” was the result of a client’s desire for a measure of safety for the front of his home.

The house is located on an intersection in a hilly part of Manhattan Beach, Calif., where the steep, downhill orientation of the streets occasionally lead cars to make turns at unwisely high speeds. Given the orientation of his front door, my client was concerned that, with a bit of very bad luck, he might someday find an out-of-control-driver’s car in his foyer.

As is the case with many spaces in this beach community, the lots are generally compact, meaning that homes of any size come right up against the property lines. I had designed and installed the swimming pool and spa in his backyard, and one day he mentioned his concern about wayward traffic.

It’s a spectacular home in a graceful Mediterranean style, so we started talking in general ways about what sort of “barrier” would fit with the appearance of the home. We talked about setbacks, the fact that the city wouldn’t allow him to put up any substantial sort of wall and the height restrictions involved in putting anything so close to the property line. After a time, I suggested that we install something that would provide both visual interest and a physical obstacle.

My idea was to place heavy, concrete-filled objects – basically decorative bollards – that would be visually appropriate to the setting in terms of size, scale and style. They would take the form of three large urns that would overflow with a very small volume of water, the thought being to make everything visually subtle. The water would flow down the sides of the urns and collect in a hidden catch basin.

I’ve seen this approach used before and generally haven’t liked the results, invariably because the designers seemed to have a universal urge to light the urns from within and use overly aggressive flows of water to create something of a spewing, volcanic effect.

That’s the last thing I wanted to do, particularly in this setting: Everything about this home is very soft and warm with rich earth tones – light olive house, copper gutters and bronze fences along with soft-looking hardscape materials (mostly Sweetwater stone), elegant papyrus and a multitude of brushy, soft grasses.

In keeping with that visual “mood,” my idea was to create an effect that put its accent on subtlety and the appearance of a very small amount of water caressing the textured surfaces of the urns. In fact, I wanted the appearance to be so subtle that a casual observer would only notice the flow by slowing down to take a closer look.

After we discussed possibilities, the homeowners themselves found the three ceramic handmade urns, varying in height from 24 to 42 inches with diameters between 24 and 30 inches at their widest points. All three were finished in rough, somewhat distressed earth tones that suggested great age. Two were textured with embossed grids, the third had a simpler irregular surface, and all three picked up the colors of the house.

During the day, the sun plays on the wetted surfaces and textures to create amazing, glimmering reflections that are quite eye-catching. We surrounded the urns with small brass fixtures buried in the landscaping to recreate this effect through the evening.

Any time of day or night, the water appears to flow directly onto the ground. The effect is so convincing that, once the system was installed, we received an anxious call from a concerned building inspector who had driven by and was worried that hose was running somewhere and that the front area was being flooded.

In actuality, the water flows through a bed of washed, blonde Sonoma river rock that closely resembles the color of the trunks of nearby Queen Palms and was intended to be somewhat evocative of Japanese gardens. We built a reservoir beneath the urns around a 42-inch-diameter, sub-grade concrete pedestal plumbed with three one-inch lines that ascend through the waterproofed and then concrete-filled urns.

The system is driven by a 3/4-horsepower pump located about 150 feet away. The total flow to the urns is no more than two or three gallons per minute. The reservoir – a ten-foot circular basin – is completely hidden by the bed of river rock and surrounding landscaping. The steel-reinforced, poured-in-place structure is 18 inches deep, the maximum depth it could be without being considered a swimming pool by building inspectors. With the overflow line, it holds water to the 17-inch level. 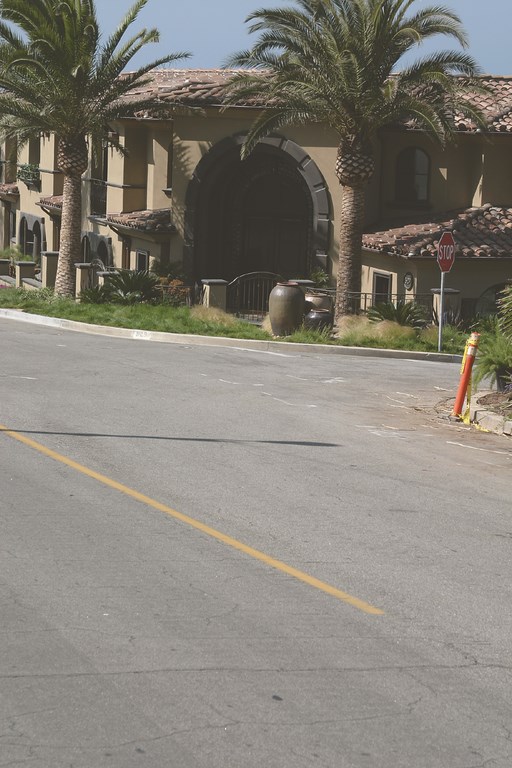 A trio of three-inch suction lines are arrayed in the basin’s floor, which is pitched to an access grate to allow for easier cleaning. There’s an overflow standpipe to accommodate rainfall, and there are valves to control the flow to each of the urns, with a bleed-off valve to relieve any back-pressure on the pump. (These are all hidden in a landscape box just a few feet away from the waterfeature for ease of access and use.)

At the inside upper edge of the basin and the centered pedestal, we formed a notch that supports four galvanized steel grates – basically screens that keep the rocks where they belong. The water flows up through the urns, over the brims and down the sides before disappearing into the bed of river rock and dropping into the catch basin. The rocks and grates are all easily removed for cleaning – particularly at the designated cleaning-access grate.

The tops of the urns are on different levels: They’re all handmade and beautifully irregular, so we made no attempt to get their brims even. In fact, the slightly irregular flow this produces at the brims adds to spontaneous nature of the effect. Especially at night, when lit, the pots stand out and create a beautiful focal point.

As important, the three urns were set into the central pedestal when it was poured and also were, after being thoroughly waterproofed on their insides to prevent any damage from materials in the concrete, filled with concrete to within a few inches of the brim – enough to make them extremely heavy as well as completely immobile and capable of impeding the progress of any vehicle that might careen onto the property.

Once the urns were installed and the setting completed, my client and I spent some time in an inconspicuous place watching the traffic go by. We actually saw a number of cars slow down to get a look at the watershape – and it didn’t take much thought to know why. 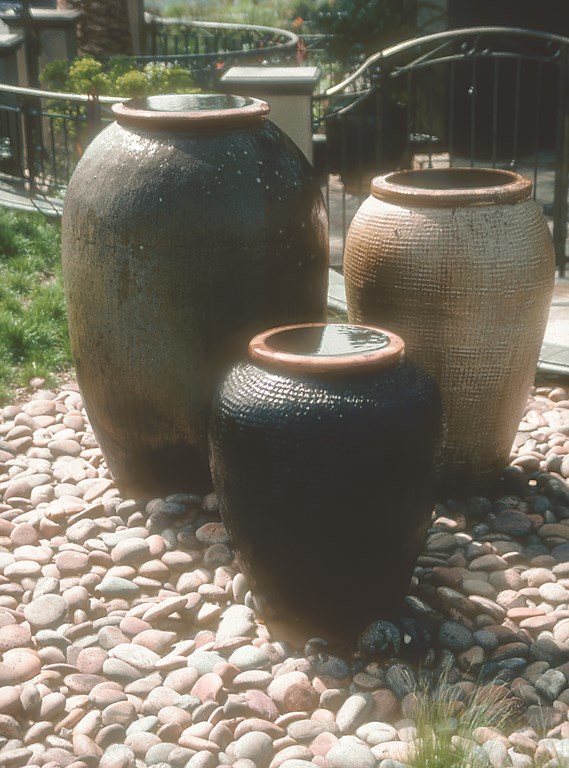 The way the light plays on the subtle water flow and flickers like a field of stars on the textured surface is visually arresting. And when the breeze comes up – as it often does so near the ocean – the water becomes even more textured and the effect more pronounced.

The lesson of this “Detail” is that water effects do not need to pour hundreds of gallons over weirs or mountains of stone to be visually compelling. The key to success in creating these sorts of interesting and beautiful features is an understanding of scale. As I’ve written many times in these pages, the power of a watershape comes from its ability to complement a setting rather than dominate it.

If this feature had been built like others I’ve seen with an aggressive flow erupting out the top of the urns, all of the grace and dignity of this watershape would have been lost. It would have looked like a common fountain – yet another example of upscale grandiosity – and there would have been little reason to pay much attention to it. As it is, observers of this watershape really need to pay attention to see the water, and only when that happens are they rewarded by this delightful effect.

Positioned at the entrance to the home, it offers an interesting welcome to visitors. More significant, perhaps, is the effect it has as one leaves the home – a goodbye spiced by an engaging impression of moving water and the subtle noise of the trickling flow.

Ultimately, we all hope that these urns will never need to stop a car from rolling through my client’s front door and, frankly, I doubt it’ll ever happen. In this case, however, the homeowner’s caution sparked the need to create a beautiful little work of art that is sure to delight and intrigue those who visit the home – or simply drive on by.