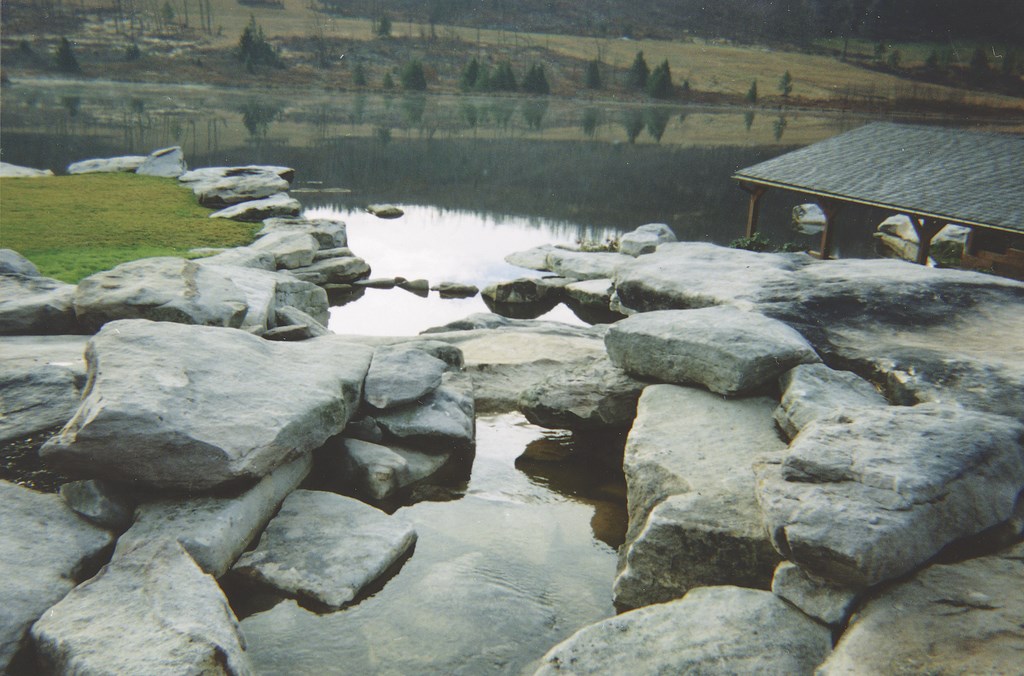 When you work on projects in which stone is commonly measured in the thousands of tons and streams are frequently described in fractions of miles, you’re not easily impressed by size. This job, however, was remarkably vast – a project driven by creative passion and a client’s desire to turn a singular vision into reality.

It’s the kind of opportunity that doesn’t come along every day, and when it did, we knew we’d have to give it everything we had.

Our company, Glacier Inc. of Glenshaw, Pa., is a design and construction firm specializing in large natural and naturalistic bodies of water, and most of our work includes creative rock formations intended to mimic nature. Through most of the past two years, we’ve had the opportunity to work with for a client with big plans for his hilltop estate on the slope of Pennsylvania’s majestic Mount Davis.

His 2,700 acres of forest land once framed a natural 78-acre lake well stocked with trophy rainbow and brook trout. In 1998, however, this picturesque setting was ravaged by a half-mile wide tornado that leveled his mountain retreat and surrounding woodland in a matter of minutes. Our mission: rehabilitate this now-barren landscape and lakefront to a level of beauty and functionality exceeding the original.

As we took our first two-and-a-half-hour drive to the site, we had no idea just how devastated the property had been. After several hours of site analysis that involved assessing the condition of the lake and surveying the property, we concluded that the first step in the watershaping aspect of the project would be restoring the lakefront with massive amounts of stone – both for bank stabilization and aesthetics.

As luck would have it, we also discovered that we would be able to quarry all of the stone we’d need right there on the property. 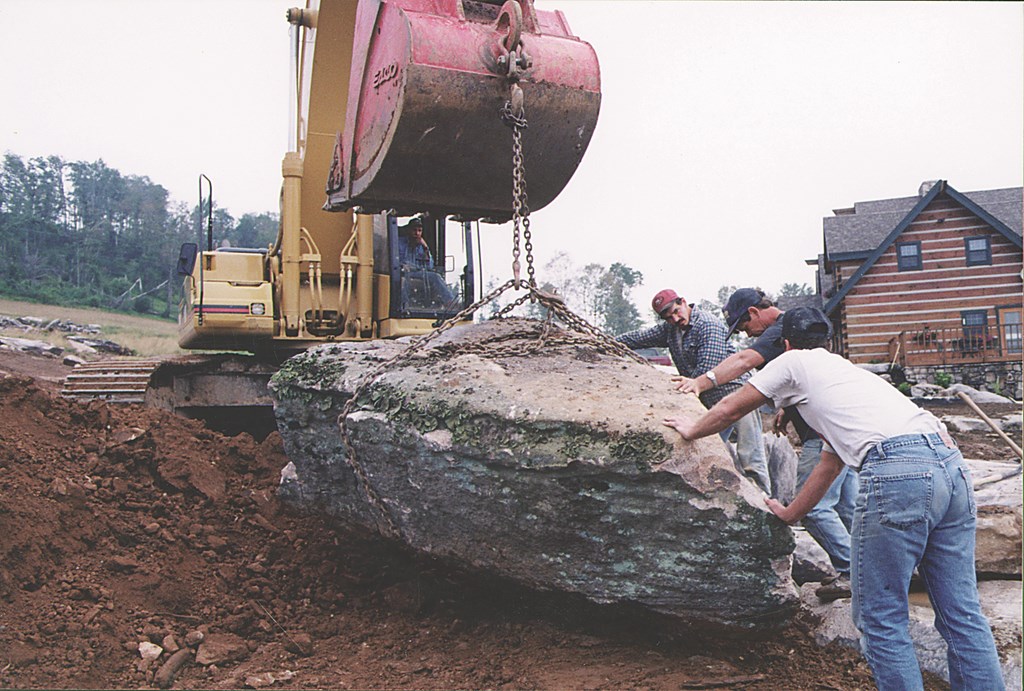 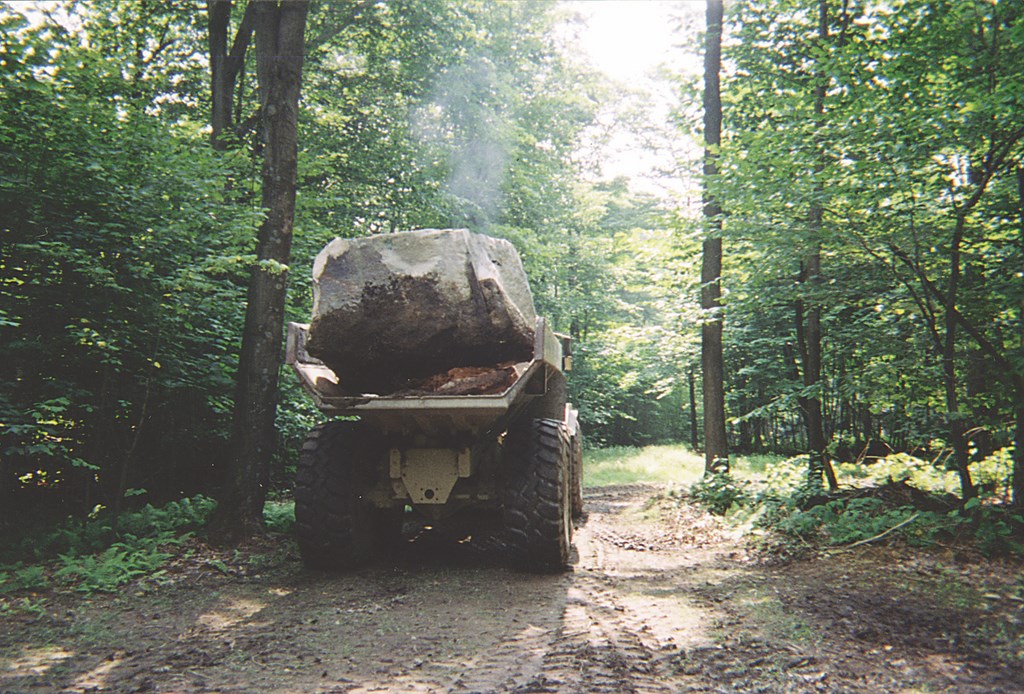 The indigenous sandstone is of excellent quality and has a beautiful gray patina, and we had an advantage in the fact that it is quite similar to stone we extract from the quarry we own and operate near our headquarters.

We knew well that getting at the stone and moving it from remote locations on nonexistent roads across rugged topography wouldn’t be easy. We also knew that, given the amount of material we’d need, quarrying on site would save hundreds of thousand of dollars in shipping costs.

So our first steps involved cutting and building a roadway to reach the outcroppings we’d selected for quarrying. Then came setting up large staging areas for processing the stone and transferring it to trucks. Finally, we were ready to start hauling stones through the rugged terrain to the lakefront.

Our design called for creating a 500-foot stone shoreline and boat-dock area in imitation of a northern glacial pool. A 250-foot mountain stream was to cascade from a massive barn structure to the rocky shoreline. And we would round out the project by installing thousands of feet of stone pathways and naturalistic formations that would connect the main house to the barn, boat-dock and lakefront areas.

Our client is an avid sportsman with a strong interest in fly-fishing, which inspired us to an interesting and exciting design twist: Leading into the lake, we set up sequences of stones at various elevations just above or just below water level that extend 40 feet beyond the lakefront.

These (mostly submerged) stone pathways gave the project a character and level of difficulty unlike any watershape we had ever tackled. The result is a set of structures that enable the client literally to walk on water to prime fishing spots – but as we discovered, it was like moving heaven and earth to pull off the effect.

In planning the project, we knew we’d need a steady supply of massive boulders of varying shapes and sizes. To eliminate potential headaches, we brought in two huge pieces of equipment – one a 40-ton excavator for the roadwork, excavation and staging, the other a 30-ton off-road truck for hauling – for the duration of the project.

For six long months, we quarried the native stone, pulling out some specimens so large that a single piece filled the bed of the 30-ton truck. In time, all these stones were transferred to a series of staging areas we’d set up along the lakeshore and stream path. 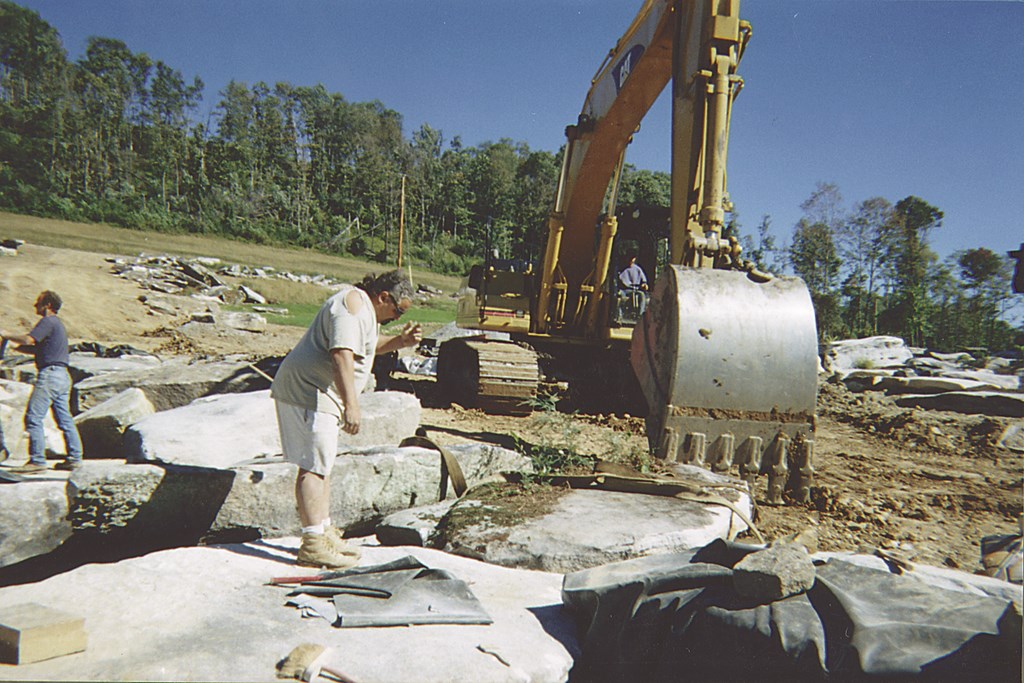 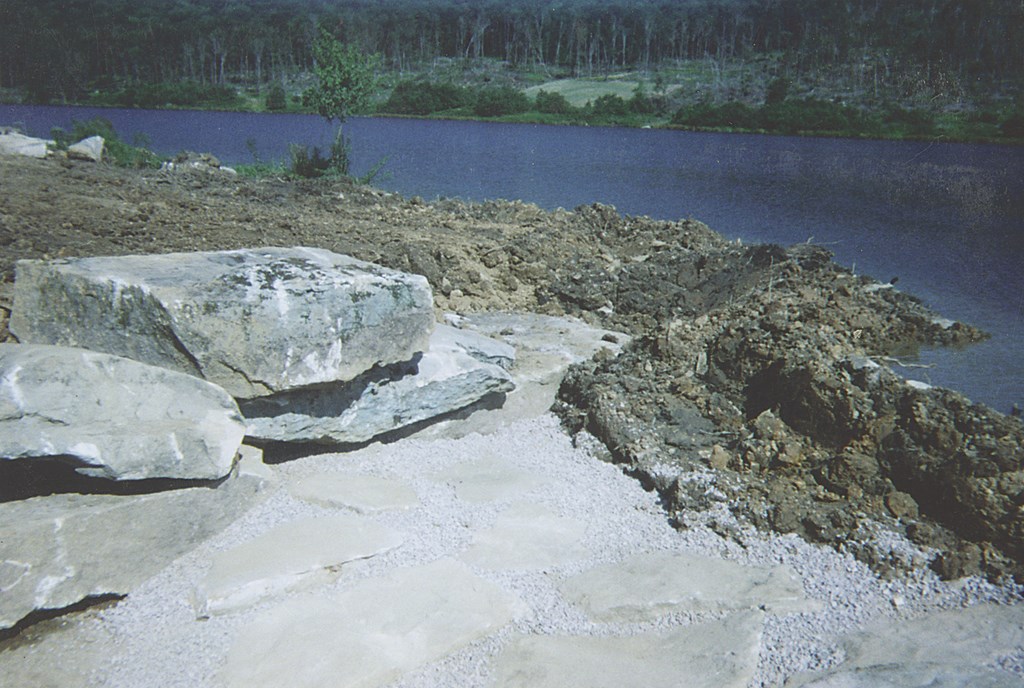 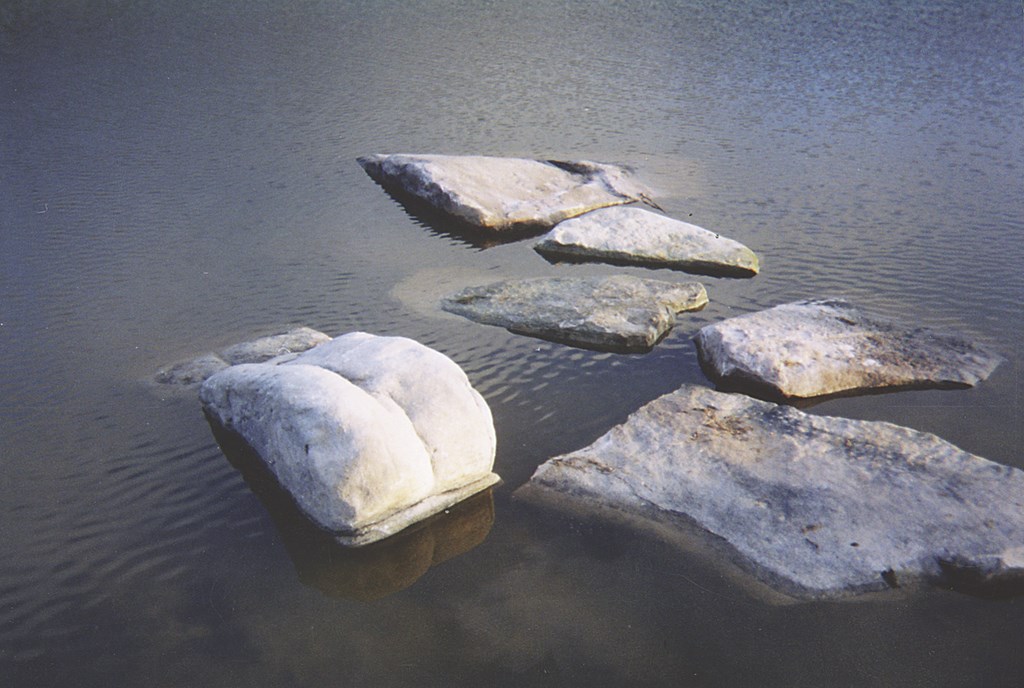 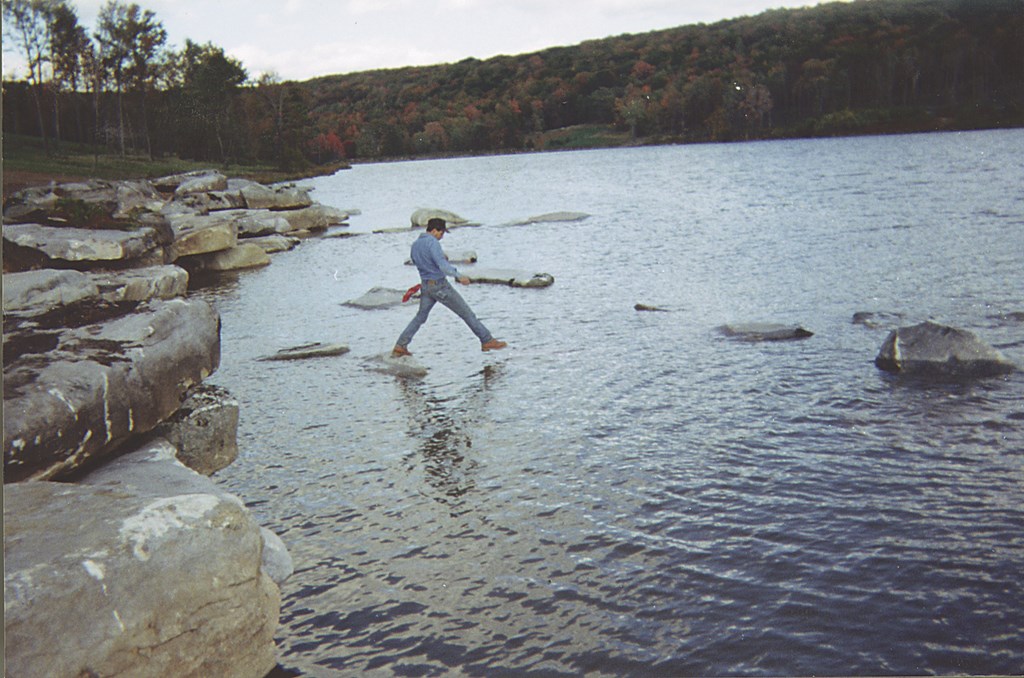 Our site work began with the toughest and riskiest part of the entire project – the “walk on water” stones. We all saw this as a wonderful concept in discussion and theory, but we were initially daunted by the challenge of moving 15-ton boulders into the middle of a muck-bottomed lake.

We recognized quickly that we’d have to claim this underwater turf foot by foot and began by reaching out into the water the full length of the excavator’s boom, removing the muck and backfilling with a base of crushed limestone. Then we placed large boulders (with less desirable appearances) on the limestone and carefully advanced the excavator across the newly placed material – repeating the process again and again while moving farther and farther into the lake.

This process of transferring rocks the size of Volkswagens was treacherous, because the machine tracks were always completely submerged in water muddied by the removal of all the muck. The operator literally had to “feel” his way across the rocks using the boom and bucket.

Once the subsurface work was complete, we began selecting stones that would break or lie just below the surface. We focused on dimensional tolerances, interlocking contours, walkable topsides and overall aesthetic appeal, then delicately fitted our choices into place using the excavator and heavy-duty lifting chains. All stones were carefully stacked, secured by weight and their interlocking contours.

The mechanical end of this process was difficult, but manageable. What really hit our crews hard was the need to wade in the 58-degree water for hour after numbing hour!

With the northern-glacier-lake model in mind, we next set to work on the shoreline and the boat-dock area.

We’d already screened through the stone possibilities and had selected many that would be used in these areas, but before we could begin with excavation or placement, we had to make some basic decisions about elevation of the new stone shoreline in relation to the boat dock and the lake’s water level.

With considerable review and discussion, we determined that by setting the stone material to rise five to seven feet out of the water, we would be able to achieve the desired visual effect while providing practical protection from erosion. 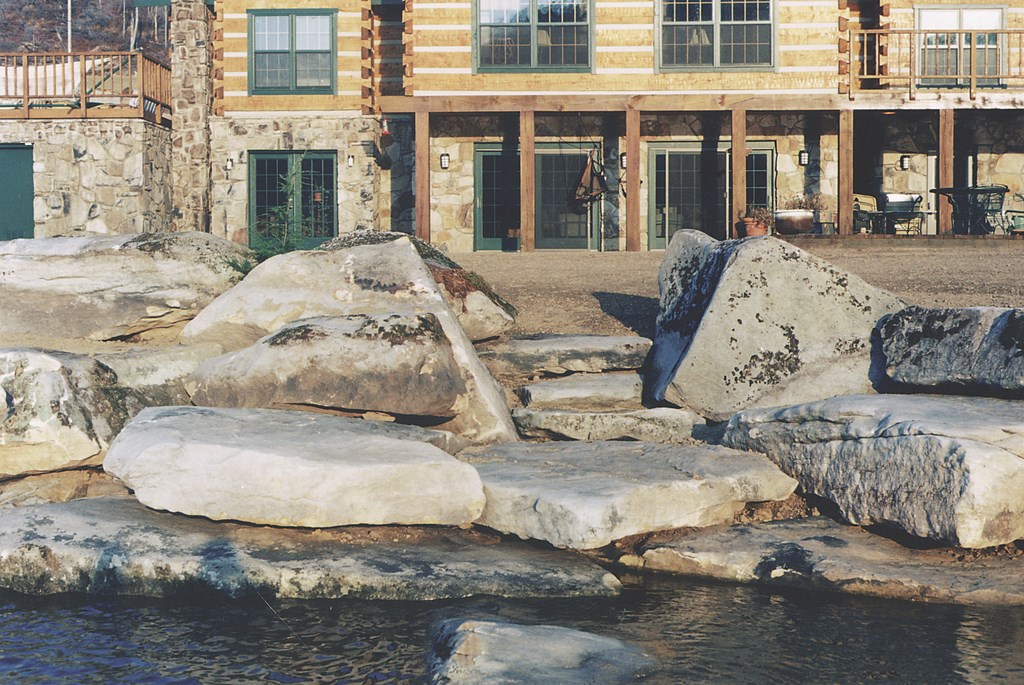 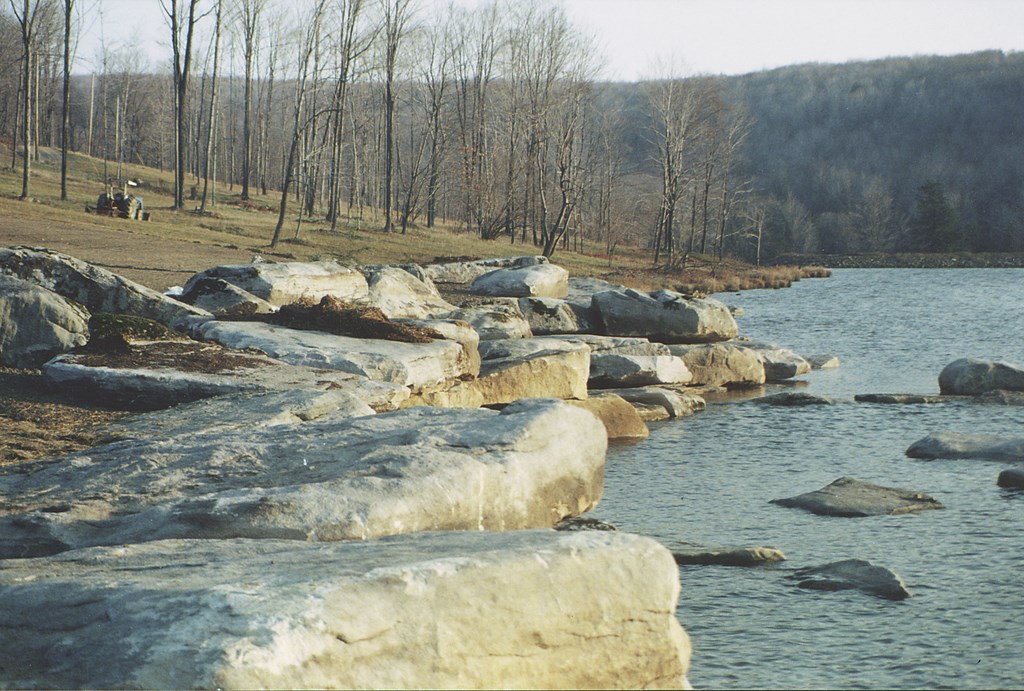 Any greater elevation would have been visually overwhelming, while any less would compromise the client’s mandate for massive, eye-catching stone structures.

After excavation, we began by setting up a series of massive base stones, again using those that were not so visually desirable – but large and flat enough to provide a good foundation for the tonnage that they would be asked to support. Once the base stones were placed, we chose each subsequent stone by shape and contour to create interesting cantilevers for climbing and casting.

On the top layer, these “finish” stones were generally in the 10-ton category – eight to ten feet wide, 20 feet long and measuring two- to three-feet thick. These large, flat pieces enabled us to establish a seemingly endless variety of perches, pathways and steps along the entire stretch of watershaped shoreline. They also served as foundations in certain places for triangular-shaped boulders we used as “cheek walls” strategically placed adjacent to stairs and defined pathways.

Far and away the most noteworthy phase of the project (from our perspective, anyway) involved the creation of a 250-foot-long mountain stream and waterfall.

The stream was designed to send 500 gallons of water per minute through a “glacial moraine” and then plunge it ten feet into a stacked-stone grotto. Aside from achieving a dramatic and natural appearance, the client wanted enough sound so that he could hear the splashing water through his bedroom window, several hundred feet away. 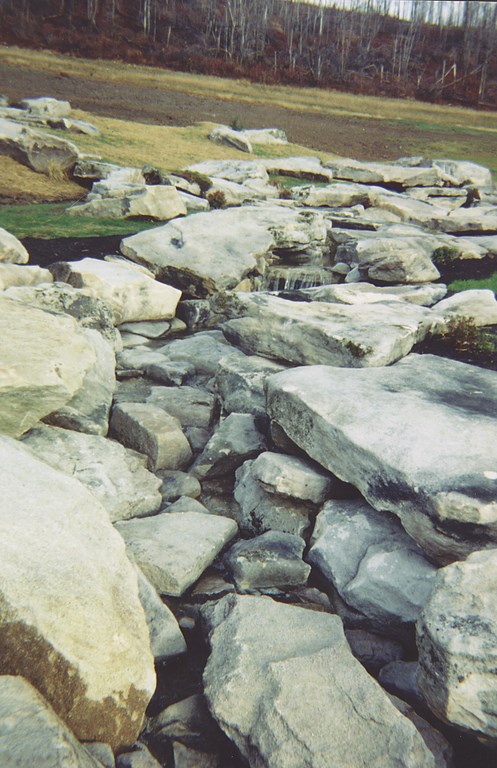 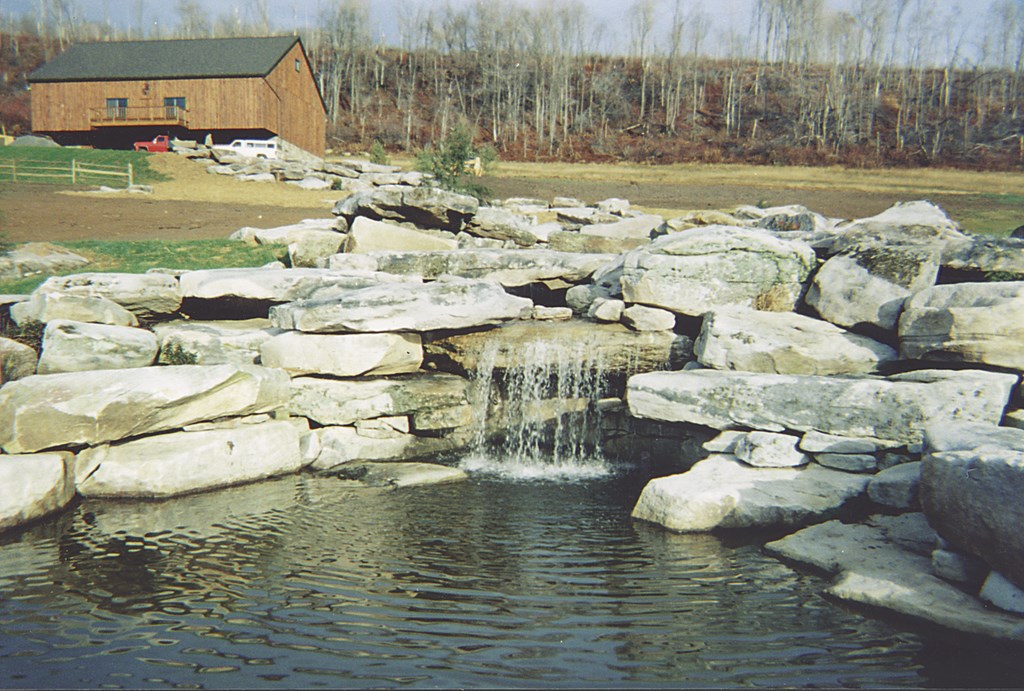 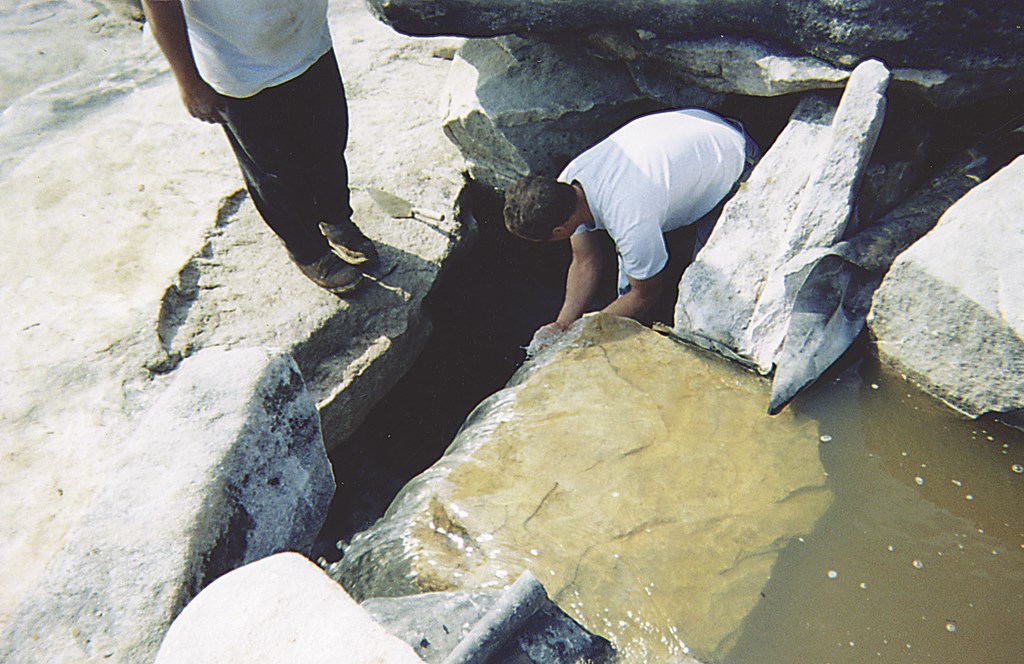 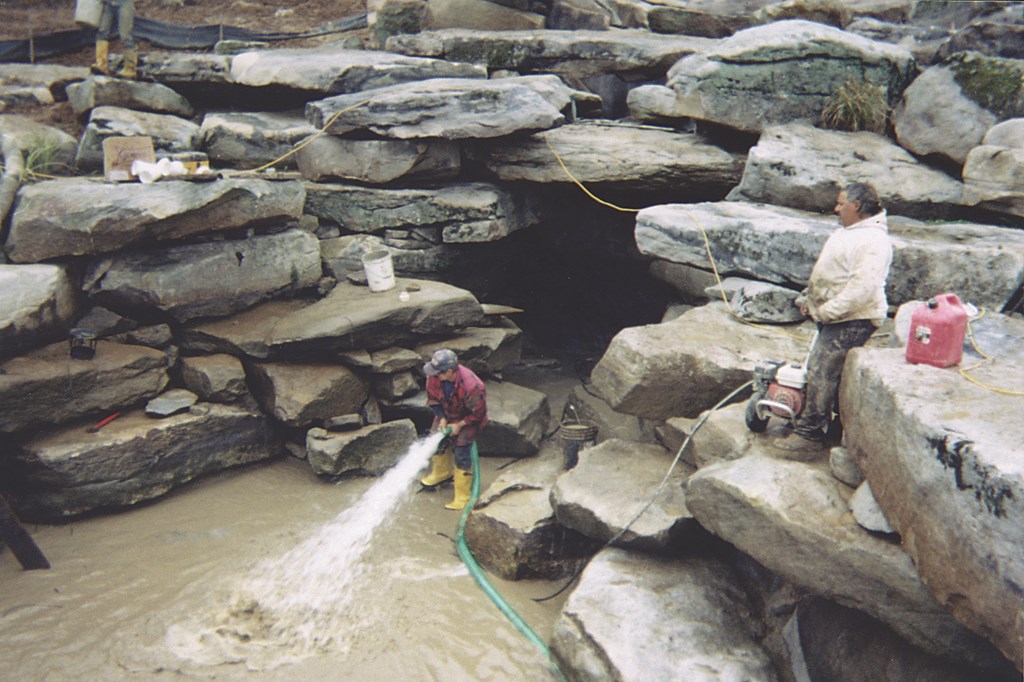 Construction of the stream, waterfall and grotto took six full months and ultimately consumed 125 cubic yards of concrete, 750 feet of 4-inch piping and 3,000 tons of sandstone – not to mention a tremendous amount of patience, stamina and creativity on the part of our crews.

In order to achieve a natural appearance and generate the desired sound, we adjusted the water depth in a series of pools, channels and cascades. This enabled us to vary the appearance, control the speed of the water flow and effectively “tune” the stream’s sound by adjusting the size and position of the stones.

By the time we began the waterfall phase of the project, we’d also decided to create a unique swimming area with large stone steps leading down into a pool and a rocky grotto veiled by the main waterfall. The bottom of this pool features enormous one-to-three-ton, interlocking flat stones fit so snugly that they offer an undulating, easy-to-walk-on bottom free of lake muck.

Taken all together, this project captures the imagination with its size, variety, and massiveness – and kept us engaged through its complexity and the huge construction and logistical challenges it offered. Although our firm specializes in massive stone watershapes of a sort typically associated with large streams, ponds, rivers and lakes, the scale and detail of this project trumps all the others we have completed so far.

At this point, the daily trials, tribulations and triumphs of the project have given way to the finer nuances of the project: the dimple of a fat trout rising to a June mayfly, the early morning dampness of an August fog, the smell of a November campfire and crisply painted December sunsets.

E.J. Biernesser is a freelance writer based in Verona, Virginia, and the brother of Pete Biernesser, co-owner with Mike Raible of Glacier Inc., a supplier of architectural and decorative stone based in Glenshaw, Pa. The company was founded in 1995 and now operates two quarries in Pennsylvania and one in Maryland, marketing its stone to architects, builders and landscape designers throughout the United States. In addition, the company tackles design and construction work – most of it featuring stonework on a very large scale.