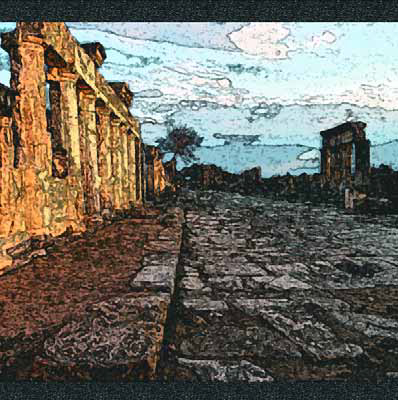 It’s a truism that almost all contemporary works of art are derivative: The ideas have already been expressed in one way or another at some point in history, and all we can succeed in doing is to apply those enduring forms as creatively as we can.

We can’t invent the wheel, but we can redraw it, embellish it, place it in context and, in our own ways, improve upon it through the choices we make in using it. To be effective in that sort of downstream effort as watershapers, it is essential that we understand the nature and origins of the basic building blocks of aquatic design.

For years, people have asked me where I get my ideas – pools raised out of the ground, the small spillways, the drain details, the modular deck treatments, the color usage and the use of reflection, to name just a few. “Through my design education” is the short answer, of course, but I can get more specific if we take a look at history and visit some precedents.

In WaterShapes’ March 2003 issue, I wrote about traveling to Turkey and chronicled some of what I saw there. This year in March, I went there again with a group of watershaping friends, and together we explored some of the earliest expressions of design details used to this day by me and many others – whether they know it or not!

The richness of Turkey’s history and the variety of design ideas to be found there is so vast that one could spend years touring and delving and digging without seeing everything. Indeed, Turkey has more classical ruins than Greece and Italy combined, and its extraordinary landscape can easily be characterized as a massed synthesis of European, Islamic and Asian culture and styles.

People in our country rarely consider Turkey as a primary destination in making their travel plans, but I’ve found in multiple visits through the years that it is extremely hospitable to Americans, full of friendly people and surprisingly safe, given its situation in a part of the world too often subject to strife and violence.

A big part of what made my latest trip so special was the group of companions who shared the experience with me, including Paul and Donna Benedetti, Rob and Suzanne Ifflander, Roger and Sherry Soares, my partner Kevin Fleming, Bob Nonemaker and my friend Lisa. None of them had been to Turkey before, and all were eager to absorb the history and cultural variety of each place we stopped. 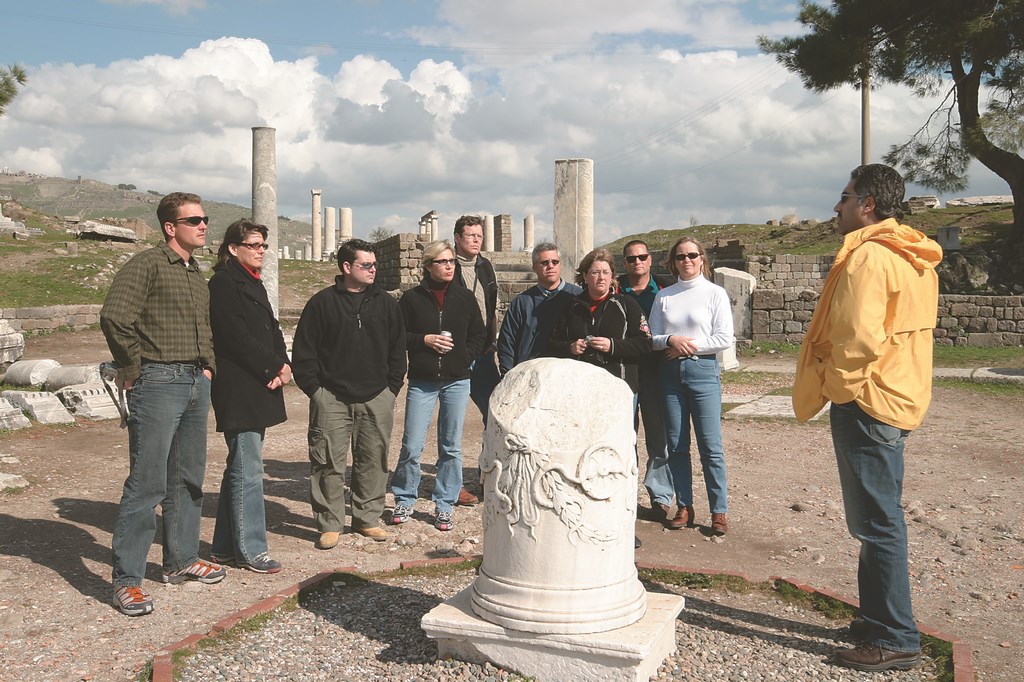 In planning the trip, I decided to concentrate on the cities and historical sites found on the Aegean coast. This southwestern edge of Asia Minor is filled with ruins, archaeological sites, temples, synagogues, churches, mosques, palaces and antiquities of every imaginable sort built in the past 2,500 years.

We flew into Istanbul to meet our guide, Adican Akar, whom I’d met on my last trip and who is perhaps the best travel guide I’ve ever known. The next day, we flew south to the province of Izmir, where we boarded a chartered bus and set out, mostly hugging the Aegean coast.

The historical, cultural and religious significance of the region was evident at virtually every stop. We saw Greek, Roman and Ottoman ruins, cities whose names feature prominently in the Bible, the Greek settlements of Smyrna and Ephesus and the ancient cities of Pergamum and Sardis as well as some “newer” cities, including Laodicea, Philadelphia and Thyatira.

In Sardis, we visited the Temple of Artemis – one of the Seven Wonders of the Ancient World – and toured bathhouses and scores of limestone ruins. This was nothing like the more-familiar experience of visiting the Parthenon in Athens, elbow to elbow with thousands of other tourists: We were almost alone here and were able to wander the ruins at will, examining the stonework, columns and baths up close.

We saw fountains that had been used to cool public spaces and deodorize public baths and vomitoriums. We examined the Roman drainage systems, saw early spas and walked through the beautiful marble features of the city’s amphitheater. We took our time and drank everything in at a relaxed pace.

In Sardis, which I’ve heard described as the likely home of King Midas of the golden touch, Adican gave us even more to consider, informing us that Sardis offers evidence of human occupation dating as far back as 5,000 B.C.

According to the Greek historian Herodotus, the sons of Herakles founded a dynasty that held sway from a base in Sardis for more than 500 years. By the early 7th century B.C., the city was the hub of a growing empire and had already developed a distinct archaeological record. 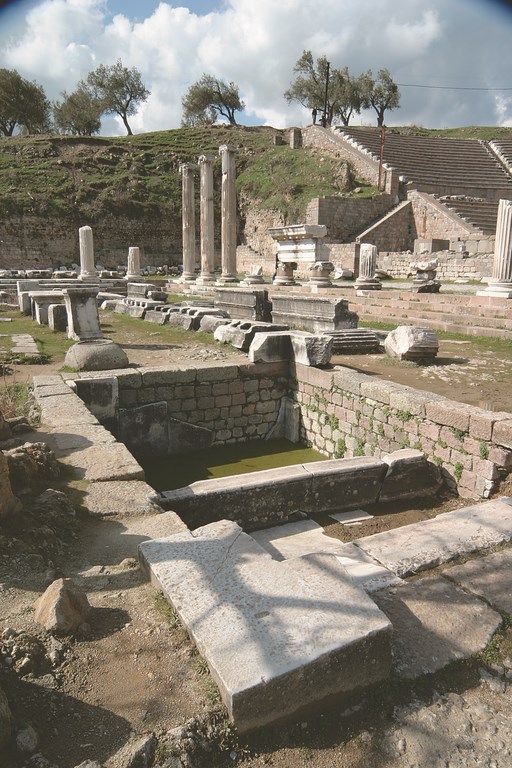 Later, during the Mermnad dynasty, the empire reached its greatest geographical extent, stretching from the Aegean coast to central Anatolia. All of this rich and complex history can be seen in ruin after ruin. In one case, we walked through an ancient synagogue and saw a mosaic-tile floor that revealed a bold use of reds and blacks.

Because of Adican’s storehouse of information, we were able to place the architecture we were seeing in reasonably precise historical contexts. His discussion of classical column styles, for example, was of high interest. We were all reasonably familiar with characteristics of the Doric, Ionic and Corinthian orders, but he introduced us to two others – a Pergamene style and a composite type that combines other styles into stunning spiral shapes.

We also toured Troy, where we learned that the great city of Homer had been rebuilt seven times through the years, leaving layer upon layer of ruins in a veritable archaeological cornucopia. The Bronze Age city, which sat in a strategic position between Europe and Asia, made its greatest mark in literature, first in The Iliad, Homer’s tale of Helen of Troy and a spiteful war, then in The Odyssey, his hymn to Odysseus’ heroic voyage of adventure and self-discovery. 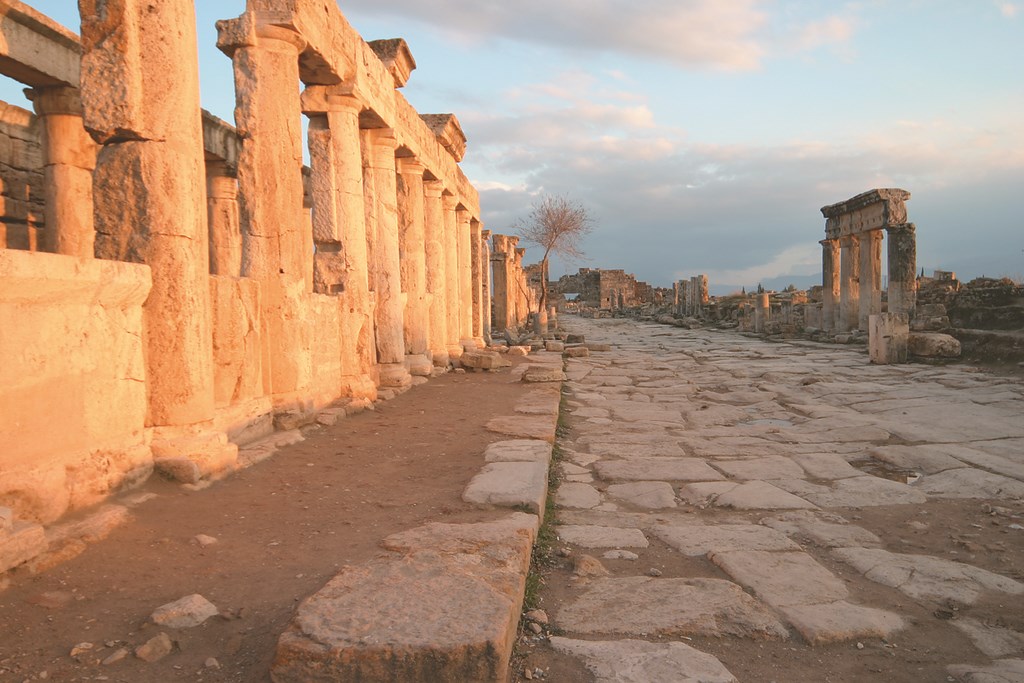 After the Trojan War, the city was basically abandoned until about 700 B.C., when Greek settlers arrived in the region and renamed it as Ilion. It figures in the story of Alexander the Great in the 4th Century B.C. and was resettled and partly rebuilt by the Romans in the 1st Century B.C.

Wherever we went, we kept tripping over these names out of history books, and I credit Adican for keeping us up to speed with his running commentary. One of my favorite stops was in the wonderfully named Aphrodisias, the city of Aphrodite, goddess of love. There we saw a 200-meter-long pool, amazing black-and-white checkerboard tile mosaics and bold uses of red marble. Elements of each have, at one time or another, made appearances in my own designs.

While there, we also toured the beautifully preserved Temple of Aphrodite, strolled through a white-marble odeon (a small amphitheater with water in front of the stage), saw a 30,000-seat, colonnaded playing field and took in the great Portico of Tiberius. I’m told that the city had been home to a famous sculpture academy in Roman times, which makes sense given the high-grade marble quarried a short distance away.

Throughout the trip, I found myself thinking and saying time and again that the designs I develop have been profoundly influenced by this classical heritage and that my work largely involves a spirited adaptation of things I’ve seen in Turkey and elsewhere. None of us can claim to have invented the swimming pool or the fountain or the reflecting pool: What we do is translate and transfer ideas plucked from the annals of design history.

And the best way to do so, as I’ve written time and again, is to travel and see these precedents in context while keeping an eye open for details you can use.

In all my traveling, in fact, I’ve found no better design resource than Turkey. I’ve derived countless details from things I’ve seen there, and I keep going back because I see it as a true laboratory of ideas that cuts across time, cultures and history. 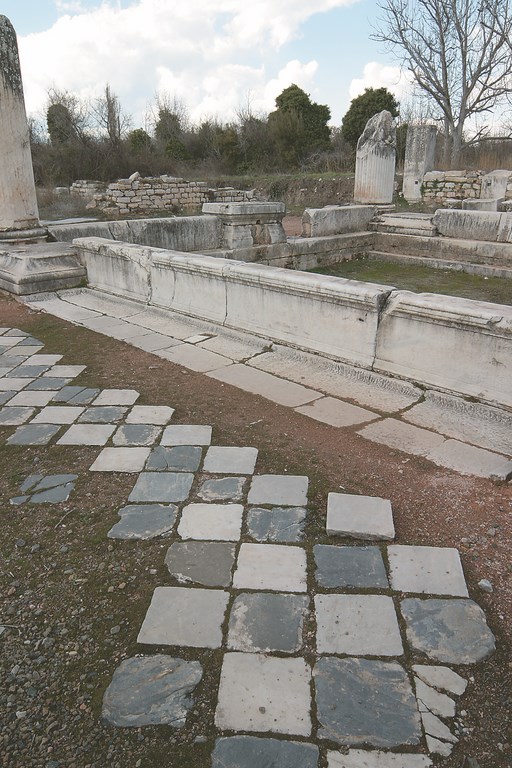 This is where, in 1985, I first saw the stone drain details I use; this is where I was encouraged to expand my color palette and found the will to propose color schemes and combinations that have seemed outrageous to many of my fellow watershapers. The juxtaposition of vertical structures and reflective water surfaces is another approach I use, and I can trace it right back to ideas explored centuries or even millennia ago.

Everywhere we went, in fact, we saw reflecting ponds close to incredible columned structures. In Istanbul, we saw the use of runnels to keep the Sultan’s palace cool as well as fountains and subtle drains. We visited the underpinnings of the city, moving through cisterns completed by the Romans in 532 A.D. with countless arches that served (and still serve) to contain the millions of gallons of water needed to supply what was once the world’s greatest city.

Our last evening was appropriately spent in a restaurant located within one of the old cisterns near the Blue Mosque. We enjoyed terrific food and reflected on the fabulous experience, and I was happy that all my traveling companions seemed to have reveled in everything we experienced.

Will this trip influence their designs or their thinking about world history? I can’t say, but I do know that traveling to places like Turkey, Venice, Rome and many other places has transformed my own work as a designer and has helped me elevate my game in myriad ways. To answer a question that was often asked of my companions before our trip, this is why we all went to Turkey.

Next month: back to the renovation project discussed in the April issue. Also, watch for a detailed feature on Turkey’s classical architecture and watershaping in an upcoming issue.