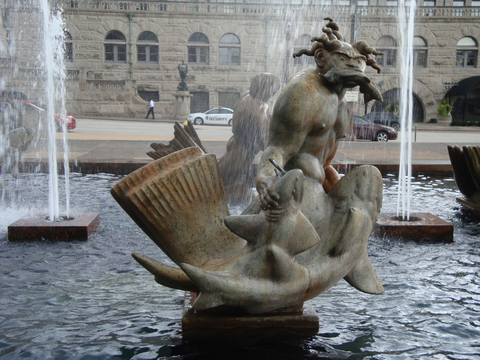 His survey of St. Louis's fountains finally carried Jim McCloskey to Aloe Plaza and 'Meeting of the Waters.' a wonderful set of river-themed sculptures, well worth a visit.  And let's not forget all of the controversy kicked up when the composition was first unveiled in 1940!

The four years in which our daughter was in school in Missouri took us to St. Louis on several occasions. Given her busy schedule, Judy and I were frequently left to see the sights on our own; happily, the city and its region offered us plentiful opportunities for diversion – including a large number of fountains and waterfeatures.

We saved one of the best fountains for our last visit, stopping to see Meeting of the Waters in Aloe Plaza. The fountain dominates the view across the street from the main entrance to Union Station, a classic, beautifully restored train terminal. The site’s combination of art and architecture makes this long stretch of Market Street a huge draw for locals and visitors alike. 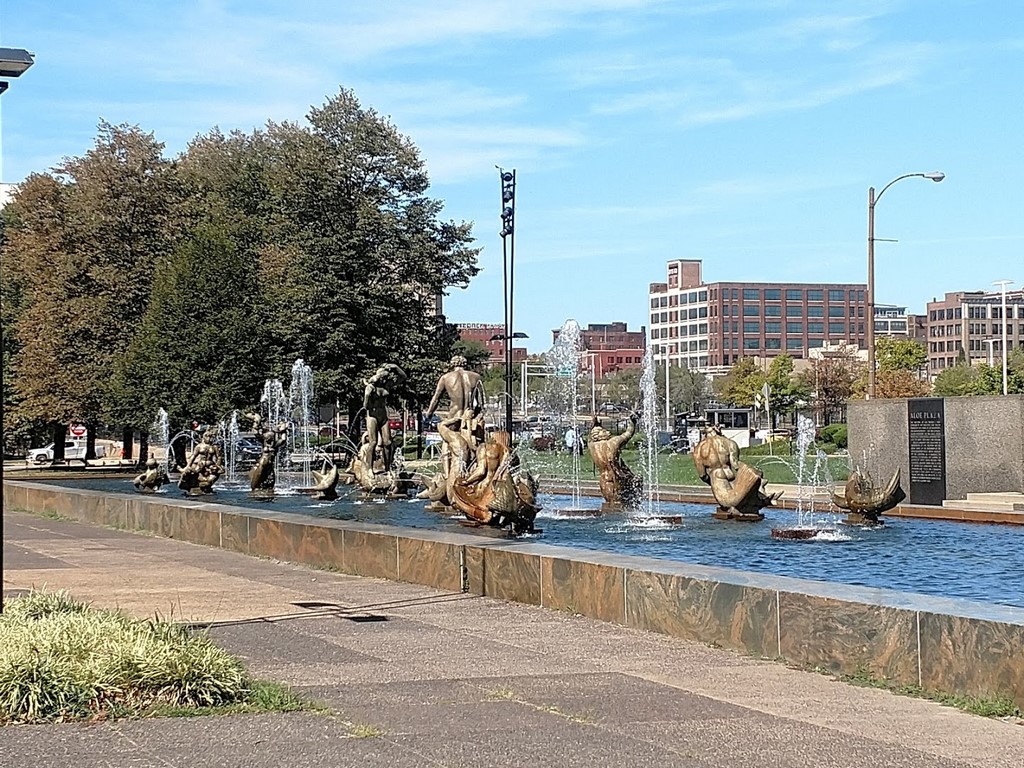 The fountain is truly a wonderful composition, spread out with 14 large bronze figures and the sort of monumental grandeur that was the hallmark of lots of urban art of the post-Depression period. The artist was Sweden-born sculptor Carl Milles, and it was unveiled in 1940 in a big celebration of the city’s prime position at the confluence of the Mississippi and Missouri rivers. 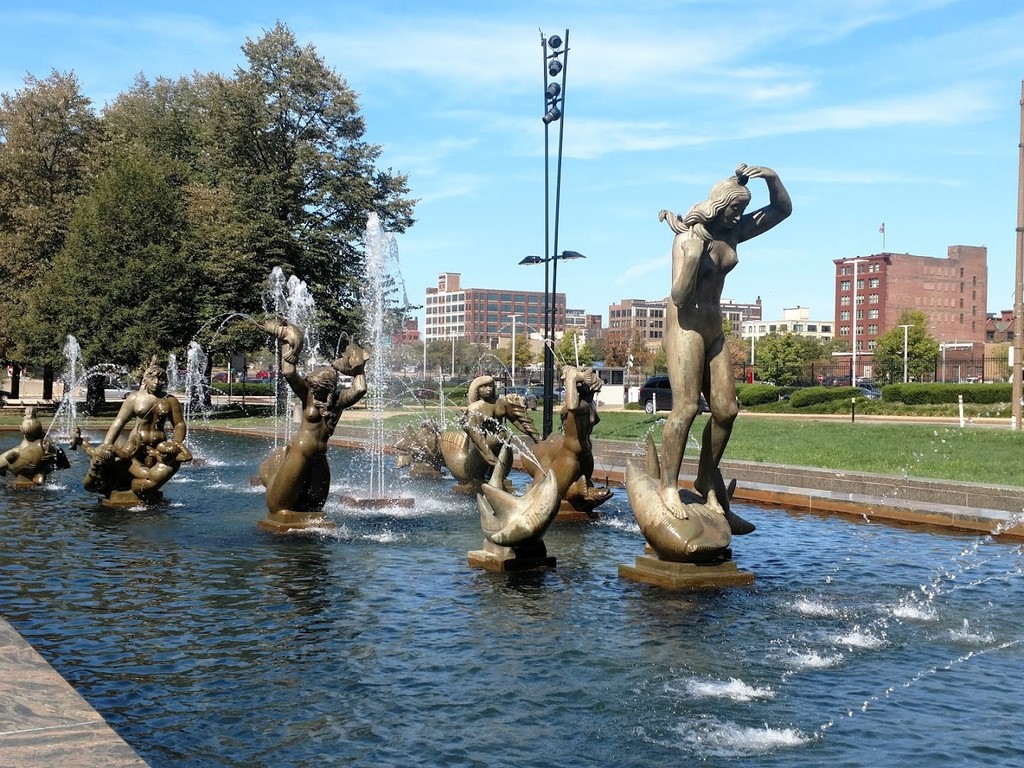 As has been the case with many figurative sculptures unveiled in our past, this one caused a stir with its nudity – particularly the anatomical accuracy of the male subjects. I can only imagine what it was like on unveiling day, when 3,000 watched as the draperies were removed, the applause began and people in the crowd gradually started noticing details of what they’d been cheering so avidly.

It didn’t take long for critical voices to be heard, and the repercussions cut deep: The sculptor’s intention, for example, had been to name his composition “Wedding of the Waters,” but that was dismissed as too risqué by city fathers, clearly projecting their sense of what part of the nuptial ceremony might have been on the minds of the nude, fish-riding man and woman at the heart of the composition. 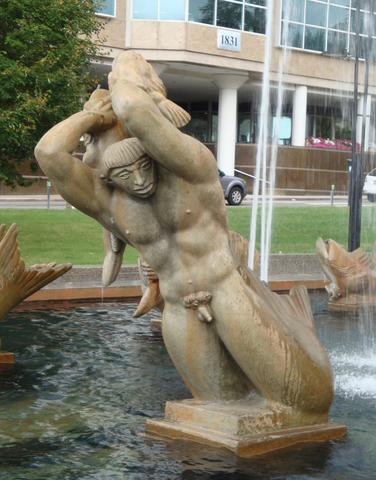 I’m a big fan of aimless, strident prudery, and this case is epic!

I’m also a fan of Carl Milles, whose distinctive style has appealed to me whenever and wherever I’ve crossed paths with it. There’s something muscular and ungainly and even cartoonish about his figures, and the fact that he so obviously had a sense of humor about the human body is what appeals to me most – and almost certainly was what kept him at odds with onlookers, particularly in the United States. 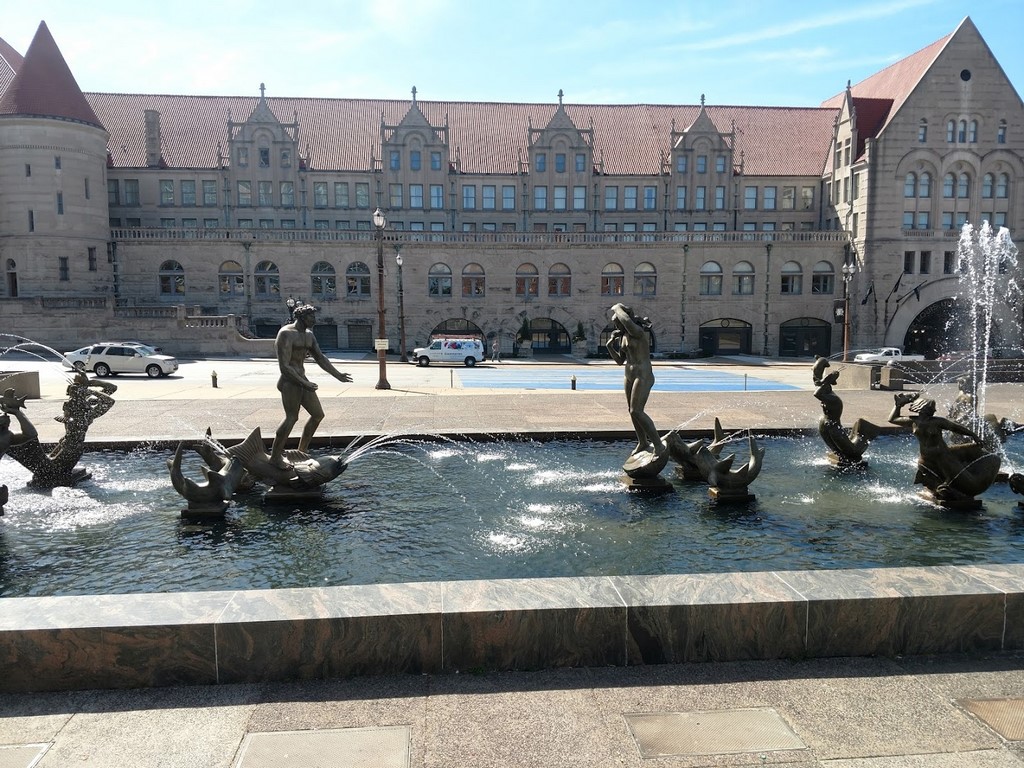 From time to time, waggish locals have put bathing suits on the figures, and Milles himself enjoyed the silliness, letting his critics know not to worry – that he had a fig-leaf maker on retainer who could cover up any bits that might offend. Fortunately, St. Louis doesn’t seem to have taken him up on the offer.

Great stories, good fun, fine monument. If you get the chance, stop on by.