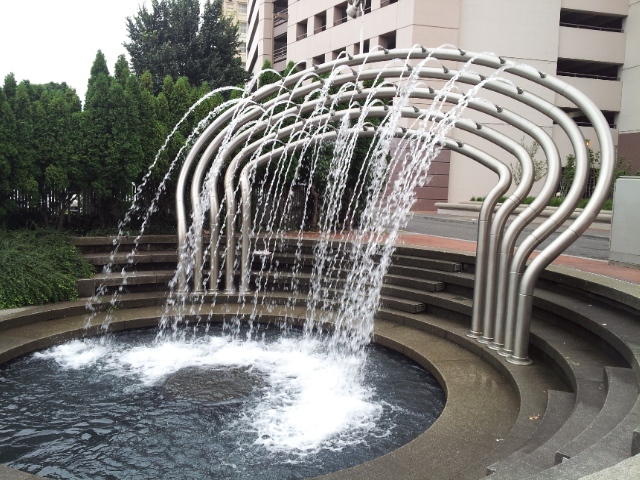 In my various trips near and far, I’ve occasionally experienced fountains that function only sporadically.  If you’ll recall, for example, I wrote in December 2012 about Ricardo Legorreta’s purple aqueduct in Los Angeles’ Pershing Square, which, I’ve been told, runs only when the local water table permits it – which is why I had to visit the square three times before I witnessed it in operation.

I’ve also seen fountains that were installed with either official names or no names at all – but that are universally referred to by locals with other, generally less-respectful names.  I wrote in June 2013 about the Inverted Fountain on the UCLA campus, for instance, mentioning that irreverent students (at least of my generation) called it the Perpetual Toilet because of the familiar way the water circled so voluminously into its drain.

Now I offer up a fountain that scores big in both of these odd categories:  It’s an unnamed fountain in Portland, Ore., that has what is often complained of as an overly sensitive wind sensor that shuts the water off completely at what seems the slightest provocation.  It also has the distinction of looking a bit like the sprayer bar in a commercial convenience, so most people call it the Car Wash Fountain. 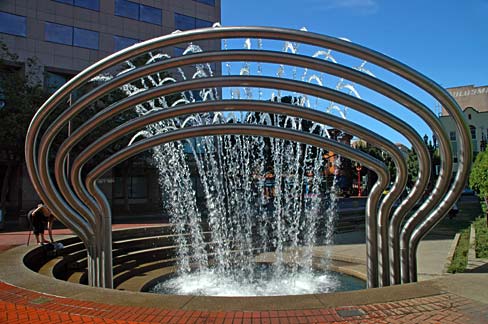 Made up of rows of curving metal tubes, the fountain was installed in its compact Portland park in 1977 with a design from the firm of Carter, Hull, Nishita, McCulley and Baxter.  (Nishita had been an associate of Lawrence Halprin’s, but separation from the great man evidently led him on a different stylistic path.)  The spray jets apparently make pedestrians miserable when the wind blows (which it often does in Portland), so when the breeze reaches a scant two miles an hour, the water stops flowing.  This low threshold makes it a bit too easy to find the Car Wash closed for business.

I have to say that I’m not terribly fond of this fountain – and it’s only partially the result of having had the misfortune of stopping by to see it on a cold, blustery day.  Basically, I don’t think it’s an attractive contribution to the cityscape; I’d also like to think it was incumbent on the designers to recognize the problems even a gentle breeze in this particular location would cause with their fountain’s basic operation.

That doesn’t mean the fountain isn’t worth a visit:  People who write about Portland’s attractions look at it with obvious pride – and it’s not just because they like referring to it as the Car Wash Fountain.  Maybe it’s just me?

Then as now, I look on the bright side:  The Car Wash Fountain is within easy walking distance of a bunch of other fine Portland fountains, and it’s hard to stay upset when you have about a mile to walk to the Keller and Lovejoy fountains – two of Halprin’s masterpieces.

For a very brief video showing the fountain in action, click here.