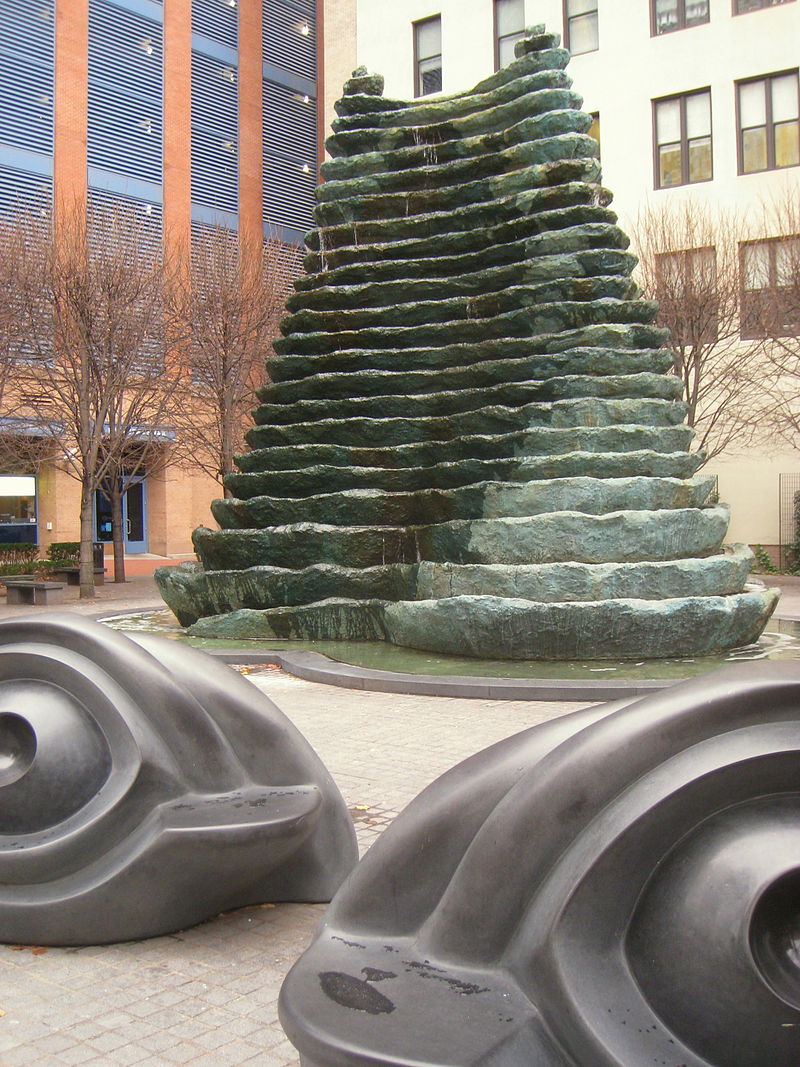 I love the fact that she was a friend and compatriot to Jackson Pollock, Willem de Kooning, Mark Rothko and other leading lights among the abstract expressionists.  I love that she lived to be 98 and, just before her death in 2010, was still engaged enough by the world around her to start communicating through her art in support of the lesbian, gay, bisexual and transgender community.  I love her name, which would have been the perfect alias for an avant-garde artist of the 20th Century but for the fact that it’s really hers.  Finally, I love her big sculptures, including the 25-foot-tall one in Agnes R. Katz Park in Pittsburgh, Pa.

Maybe the only thing about Louise Bourgeois’ work I think I don’t like is that she decided that the 25-foot-tall one in Katz Park would make a good fountain.  I just have to disagree with her decision and don’t find myself being satisfied or happy in its presence.

The park took shape in 1998 and was dedicated to the memory of Ms. Katz, a prominent patron of the arts.  The fountain sculpture dominates the space, which was designed by the renowned architect Michael Graves in collaboration with Daniel Urban Kiley, a distinguished landscape architect, as well as Ms. Bourgeois, who also contributed three paired benches (seen partly in the photo above by Daderot | Wikipedia) that, because of their shapes, have lent the space its nickname:   “Eyeball Park.”

I savor the oddly disturbing eyeball benches and admire the towering nearby structure as a sculpture, but as I mentioned above, I have my problems with it as a fountain.  Yes, I get the symbolism of the two flows at the top joining into a single flow down the structure and its supposed reference to the Allegheny and Monongahela coming together in Pittsburgh to form the Ohio River.  But the water element nonetheless seems forced:  The sculpture existed before its placement was a consideration; Ms. Bourgeois was a committed New Yorker rather than a Pittsburgher; and I can’t help thinking that the plumbing might have been an afterthought?

Mainly, I’m bothered by the timid way the water flows down through the sculpture’s levels:  It starts out nicely enough at the top but flows unenergetically downward, sometimes narrowing, sometimes expanding as it drops, leaving the structure mostly dry.  I tried to convince myself that this worked; ultimately, however, I just couldn’t buy it.

Even though it doesn’t transport me, however, I do appreciate the fact that the tower runs with heated water and flows a considerate 365 days a year.  It was springtime when I saw it, but I wish I’d seen it draped in icicles in the dead of winter (as seen in some photos linked below).  I’ve always been a sucker for the concept of frozen waterfalls, streams and fountains, so, for part of the year at least, this fountain might just win me over.

For all my criticism, I still think it’s a great little park in the heart of the city’s thriving cultural district – well worth a visit.  And frankly,  I’d be delighted to hear from anyone who can offer a persuasive defense of the project, because it’s pretty clear to me that I’m looking for reasons to appreciate this composition as much as I like so much of Louise Bourgeois’ other work!

To see a video of the fountain in operation, click here.

To see the fountain partly covered in ice, click here.