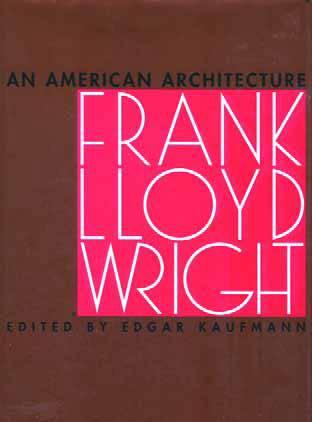 I never studied Frank Lloyd Wright in school, but I’ve been intrigued by his work and design philosophy for years and had long intended to fill this gap in my education on my own. But that’s proved to be easier said than done because of the huge number of books about him: There are simply so many of them that I never knew where or how to start.

This dilemma came to an abrupt end when I ran across a book written in Wright’s own hand. That book, An American Architecture, was first published in 1955 by Horizon Press and was reissued by Barnes & Noble in 1998. Edited by Edgar Kaufmann, the text is a compilation of Wright’s notes, speeches and lectures spanning the period from before 1900 up until the 1950s.

The text is organized into three main sections: organic architecture, materials and case studies. Scattered over the 270 pages is a generous assortment of black-and-white photographs interspersed with a handful of colored-pencil illustrations. And as one might expect from such a towering and self-determined intellect, Wright is not particularly easy to read or understand.

The discussions are dense, often intensely philosophical and even self-aggrandizing, but they’re invariably rich and thought-provoking. Still, this is not the kind of book you read once and walk away feeling as though you’ve absorbed everything. In fact, I’ve read it twice already and know for a fact that I’ll be returning to it for a third and probably a fourth cover-to-cover session: Many of his ideas require careful consideration and re-consideration before it’s possible to perceive them at anything approaching full depth.

He discourses at length, for example, about organic forms and the “inward sense” that drives true design, challenging designers to work out their ideas in their heads to the greatest extent possible before placing them on paper. When you consider the formal state of the design and architecture professions in the early days of Wright’s career, it’s startling to think about how incendiary his ideas must have seemed to his contemporaries. And it’s no less amazing when you consider how challenging and revolutionary they remain to this day.

There are also extensive discussions about materials and his love of glass, stone, wood, sheet metal and concrete. He discusses in detail the importance of working with settings and the value of designing the complete environment, including furnishings, interiors and landscapes. He writes about simplicity of form and the value of space and light and offers wonderful reports on the advent of “open” architecture and the traditions of Europe and Japan and how they influenced his designs and approaches.

There’s so much covered in these pages that simply highlighting the big points would far exceed the space I have available here. But perhaps his grandest and most empowering idea for watershapers is that architecture is “the mother of all art forms.” Time and again, he makes it clear that he saw his buildings as works of art and understood the breathtaking potential to be found in treating the human environment as the ultimate artistic canvas.

To be sure, there are dozens of books that might offer simpler approaches to understanding Frank Lloyd Wright, his art and his contributions to 20th-century design, but after reading this book, I’d think that there’s no better place to start than with the architect himself.