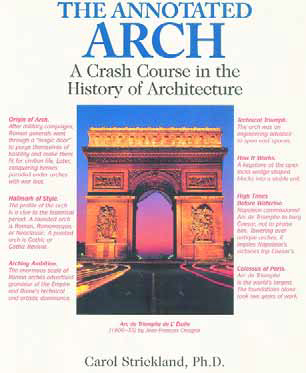 I don’t know who first expressed it, but I’ve always welcomed the notion that “great designers are great thieves.” That nugget rings so true because very few among us ever have completely original ideas and, in fact, the best designs are generally derivative of something that came before.

To my mind, if some degree of larceny is part of our game as watershape designers, then one of the very best places to find borrowable ideas is a book entitled The Annotated Arch by the historian Carol Strickland (Andrews McMeel Publishing, 2001) – a wonderful and inspiring 180-page, beautifully illustrated book that offers a concise and insightful tour of the history of architecture in ways that are always engaging and often entertaining.

Organizing discussions by major periods of architectural design and construction, she covers a tremendous amount of ground beginning with ancient landmarks from Stonehenge to the great Pyramids of Egypt and the buildings of Mesopotamia, ancient Greece and the Roman Empire. The text moves fluidly through the Middle Ages and Renaissance on up through the 20th Century.

Along the way, the book is loaded with brief sidebars that explore not only the development of such basic technologies as the arch, dome and flying buttress, but also set a context with historical anecdotes that define the wellsprings of these ingenious innovations.

There’s a wonderful passage, for example, that discusses the work of Florentine architect Filippo Brunelleschi – a seminal figure in Renaissance architecture – and the challenges he faced in building scaffolds to span the width of the domes and copulas he was commissioned to create for basilicas and cathedrals.

These well-considered sidebars are woven throughout the text, resulting in a treatment of history that hits the high points while putting a human face on the times and works of the great masters.

A great deal of attention is paid to the fact that governments and churches have been responsible for creating many of the world’s greatest buildings. There are also examples of how the design tools available to architects shaped the works they did – a thread that concludes in later chapters with discussion of the advent of computer-aided design systems that have made possible many of today’s most innovative structures.

One of the best things about this book compared to others I’ve read on the subject of architectural history is its inclusion of truly modern architecture. Indeed, Strickland spends a full third of her book on the 20th Century, and I was fascinated to read up on Julia Morgan and the way she used history and salvaged materials to create Hearst Castle in central California.

There are wonderful discussions of many modern masters, all the way from the organic masterworks of Frank Lloyd Wright to the wildly adventurous works of Frank Gehry. Here, we see how these modernists combine a superb sense of architectural history with new technology and a true spirit of innovation to create contemporary works of architectural art.

If you’re like me, you find reading most history books a chore rather than a pleasure. With all its keen insights, historical tangents and interesting anecdotes, however, this book is a shining exception. Certainly, there’s no substitute for actually visiting great buildings to gain inspiration, but for the thief in all of us, books such as this one offer a wonderful way to case the spectrums of influence out there – and borrow ideas just waiting to find their ways into the great works of tomorrow.