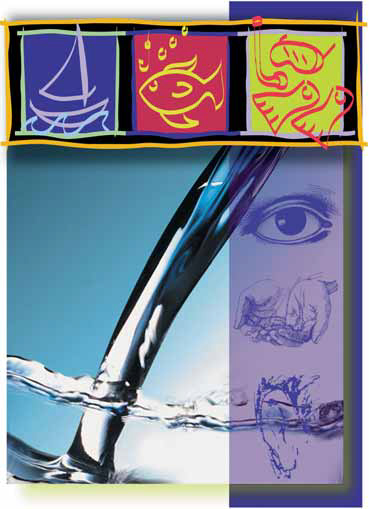 Throughout my entire working life, I’ve never moved too far away from the water. From my early days as a pool manager (beach bum) at a resort hotel in Miami Beach through many years in pool service and still today, I’ve always worked and played in and around water.

Whatever it is about bodies of water that infects people’s spirits and pushes their internal fun buttons, I have it bad: I love to sail, fish and snorkel, I like living near bodies of water and I just love to look at water. On top of all that, I’m a Pisces.

If there’s one thing I find that I tend to have in common with my customers, it’s this passion for things aquatic and the pleasures that come along with them. This is powerful stuff, and I’ve come to believe that our innate fascination rises to an even higher level of drama and interest when we’re in the presence of moving water.

Through the years in which I’ve explored the art and craft of watershaping, I’ve steadily increased my use of moving water in ever expanding and more creative ways. These days, in fact, probably 70% to 80% of the projects I design and/or build contain some form of moving water – and only seldom do any two of these projects resemble one another.

Much of this high percentage of inclusion comes from my enthusiasm about waterfeatures – and the fact that, without fail, I bring it up in some way with every client I meet. The number of people who come to the initial meeting with ideas of their own about including moving water is still pretty small – and when I bring it up, it’s still a real attention-getter.

It works this way because most people have sharp memories of moving water they’ve seen on vacation or in public places, so it’s not much of a reach for them to visualize elaborate rock waterfalls or cascading fountains.

Often, of course, any instant desire they might develop for moving water is immediately struck down by the almighty dollar (or the lack thereof). As good as the notion might sound, many customers know intuitively and immediately that the cost of elaborate watershapes is sure to break the budget.

To me, this is where the real magic of moving water as a sales/design tool really comes into play: Fact is, there’s a feature to fit even the slimmest of budgets. If you open your thinking on this, you’ll immediately find that there are all sorts of fun, creative ways to add small touches of moving water to any proposal – for very little money.

On the other end of the scale, of course, there is no limit in terms of how far you can go – but I’ve found often that the small, simple touches are what pushes clients over the edge in their purchasing decisions. As often, it’s those same small features that provide the customer with the greatest sense of satisfaction down the line.

Large or small, moving water adds three basic design elements to the work: visual, aural and tactile. Simply put, you can see, hear and touch moving water, and human beings are undeniably drawn to those sensory experiences. How you as the designer or builder choose to employ these impressions depends on the type of feature you’re including and the effect you’re after. Just the same, the important thing to remember is that this sensory triple play is at work in every waterfeature, great and small.

Let’s get specific – and start small.

One of my personal favorites here is the simplest of all waterfeatures: just a single brass nozzle installed adjacent to the pool. All it takes is a water line and a nozzle installed level with the deck – in effect, a tiny “dry deck” fountain.

These nozzles are often adjustable and can be aimed in any direction at any angle. I often install them so they’ll send a single stream of water arcing into the pool. Or I may install a row of nozzles down the side of a watershape for a linear effect or on converging angles or in any pattern the customer wants. For many pools, I use a single jet as a focal point to add a little spark to the setting.

One of the best things about these flush-mounted nozzles is that they have absolutely zero visual impact when they’re not in use. You aren’t left with some sort of inert monstrosity when the system’s off – but when it’s doing its thing, this small deck-level nozzle is the star of the show. And because they’re inconspicuous, you can put them anywhere: in the deck, in the coping, in some other adjacent structure or off in the landscape somewhere. However you choose to do it, the customer gets sight, sound and touch for just a few hundred bucks.

In some cases, I don’t even aim the flow into the pool. I’ll set things up, for example, so that the water falls onto the deck and drains into the pool. In fact, this represents a whole set of options I’ve been borrowing from a restaurant in Napa Valley, Calif. In the center of its outdoor dining area was an iron table with a vase on it that looked as if it had just tipped over. They’d plumbed this thing so that the water ran up one of the legs and continuously poured out of the vase, right onto the decking and into a basin for recirculation.

It wasn’t much water – just a fraction of what comes out of a garden hose – but it created an impressively elegant effect – and I’ve been working on variations of that theme ever since. Sometimes, for instance, I’ll set up little statues with spouts that send water onto the deck; I’ll just put in some type of grate and create a little gravity line running into the pool. Again, this is a fairly inexpensive feature, but one that exercises the senses, creates a unique sound and captures lots of attention.

I do more and more of this creative sort of borrowing all the time. I used to pass by waterfeatures and take them in at a glance, but now I stop and study them, picking up all I can for use in my own projects.

Some of this stuff can even be picked up in books. If you can’t get to Rome or Turkey or Spain or Japan to see great watershapes in person, you can study these architectural and design traditions at a library table or in the relative comfort of your office. 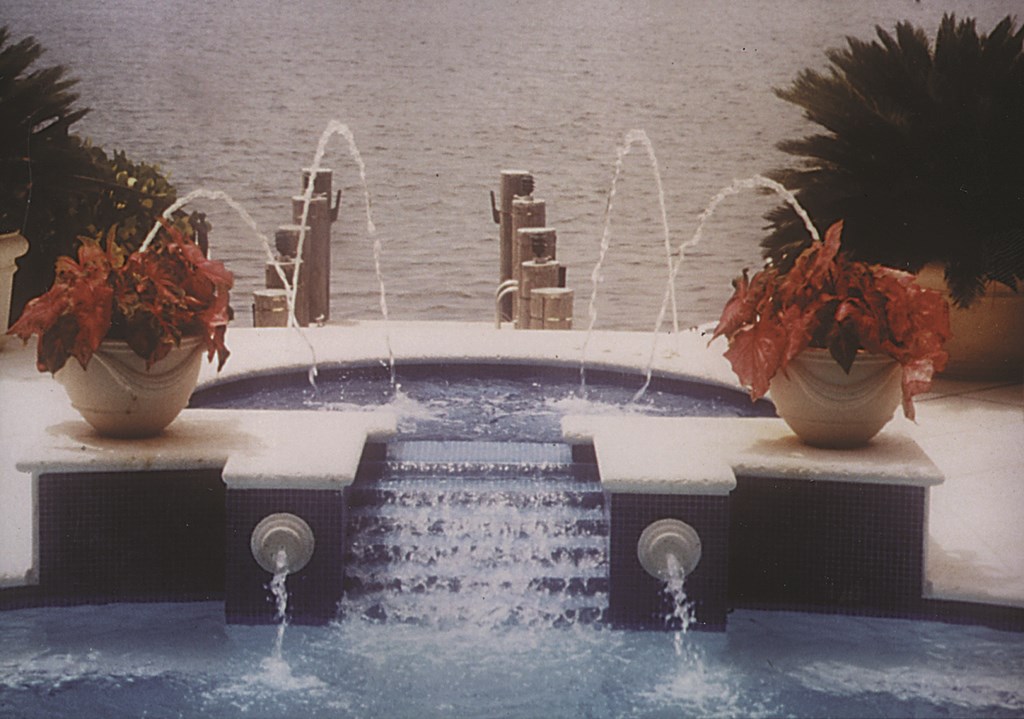 Another great source of inspiration is nature. In fact, I believe that anyone whose job it is to design watershapes should take a hike now and then: It’ll be good for your health, your eye and your imagination. Use the opportunity to look at the way water moves in streams, rivers and waterfalls. Use your camera and study the pictures later, or make drawings or take notes or use your memory. For one thing, it’s a great way to write off a vacation; for another, it gives you an opportunity to study the often surprising ways nature gets things done.

On one hike, for example, I saw this really unusual effect where a very low volume of water was trickling over a large stack of round river rocks. It’s something that I would never have considered doing – nor would I have thought that nature worked that way – but there it was, and I ended up including a very similar structure in one of my pools. (It turned out great, by the way.)

On a recent trip to Southeastern Ohio, I went on a walking tour of this deep canyon that had been carved by glaciers and water – a truly amazing place. One thing that stood out was a spot where a tiny, late-summer stream of water was barely trickling down for a distance of about 20 feet. It was unexpected, and it demonstrated that you don’t have to set up a flood to create a dramatic water effect.

You see a lot of this “sensitivity to the small” in Japanese gardens, where a trickle of water is often used to create specific visual, aural and tactile effects. Just about everything in Japan’s incredible design tradition is there to mimic some natural form, and huge effects are often achieved on a small scale. I’ve incorporated some of these ideas in my projects. Even with big, elaborate waterfalls, for example, I’ll include small “trickle rocks” to add elements of surprise, contrast and texture to the installation.

In more formal settings, where I’m after a Greek or Roman look, the “trickle” may come from a single deck-mounted nozzle, or I’ll line up a half dozen or so of these jets to create a line of arcs flowing into the pool. It’s not tremendously costly – and it nicely complements the more rectilinear styles of architecture many of my clients prefer these days. 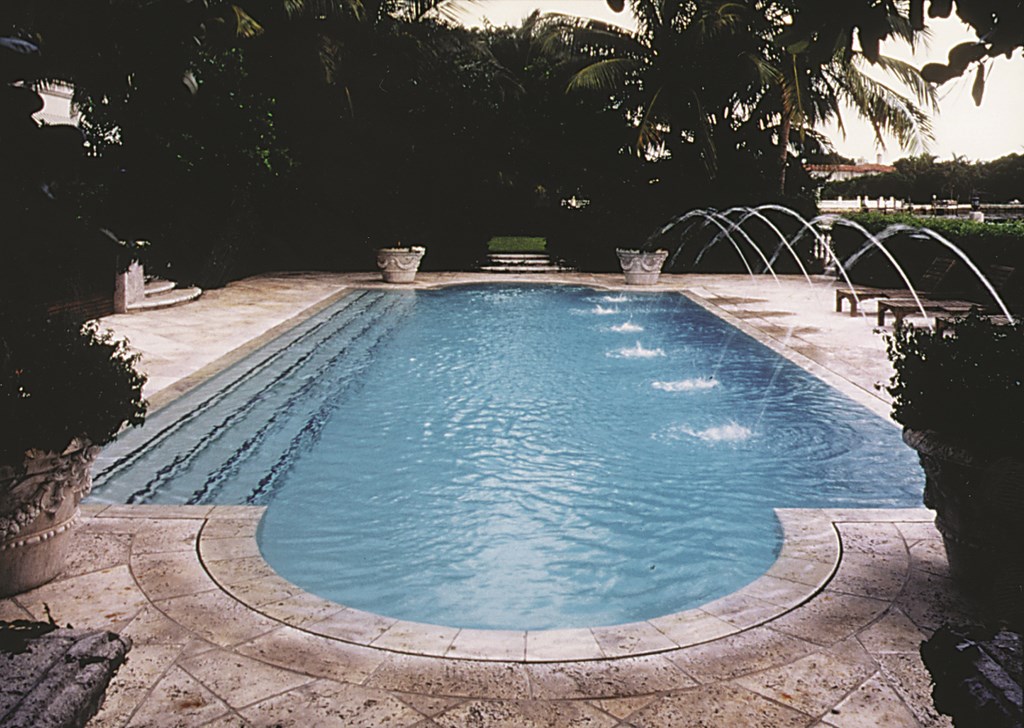 These more formal settings have given me plenty of opportunities to work with off-the-shelf waterfeatures, such as the sheer cascades or waterwall nozzles. I was particularly happy in one case in which I mounted a cascade system in a length of deck cantilevered out over the water. I’ve also set them up in archways or atop columns so the water falls from a good height and creates a curtain effect under which people can swim or play.

As I mentioned at the outset, there are no real limits to what can be designed and accomplished with moving water – and the concepts work with any style from the naturalistic to the most formal. (I haven’t focused on it here, but they also work for practical reasons – for instance, to mask traffic noise.)

And of course, there will always be those customers for whom only the biggest and most spectacular will do. Projects where you install a rock grotto with seating behind the falls and elaborate cascading waterfalls and maybe even a slide provide a real opportunity to be creative. Or you may have a client who wants a river effect that will carry bathers around the pool on a stream of moving water.

These jobs get expensive, but they, too, benefit from the sort of subtle touches described above. It’s all in the details – and the details are where the strongest impressions are often made.

It doesn’t happen too often, but I’ve run into occasions where moving water produced great responses that I hadn’t even anticipated.

I installed a vanishing edge pool not too long ago, right on the waterfront. I’d added some small streams of water that were intended to create little surface waves that would help the pool surface blend into the water in the distance. As it turns out, my client is thrilled by a couple hundred dollars’ worth of arcing spouts and doesn’t care much at all about the big-ticket vanishing edge!

Truth is, you never know for sure how moving water will influence the look and feel of a job or how the client will perceive it. Again and again, however, I’ve found that the net effect is very, very positive. We live in a time when the influence of things like Zen and Feng Shui abound. We also work in a medium that embodies very strong aesthetics.

When we fully understand and appreciate the power and beauty of moving water, we’re able to give our customers the level of wonder and fascination they crave. On that level, imagination is truly the only limit.