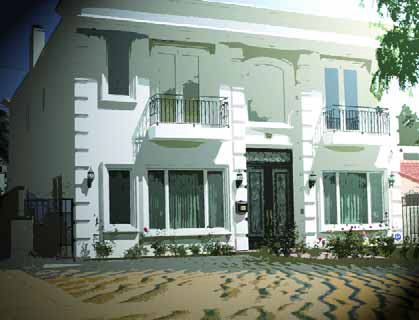 Recently, much has been written and discussed in our local Los Angeles media – newspapers, magazines, television – about an influx of architectural styles to our area that “just don’t fit in” and are generally thought of as being a blight on our collective landscape.

This isn’t anything new, of course. I recall similar dustups in the 1970s and ’80s when the stylistic serenity of old, established neighborhoods was being disrupted by the insertion

of ultra-modern and post-modern structures among the ranch houses, Spanish Colonial casitas and Craftsman-style bungalows that dominated the terrain.

The latest clamor has arisen because of the arrival in our fair city of a large and prospering Middle Eastern population that has brought along with it a distinctive style of architecture with which long-time Angelenos aren’t familiar – and for which they’ve been quite vocal in declaring their disdain.

This sort of uproar is, of course, not unexpected: It would almost be more unusual if people didn’t reject this unfamiliar look and sat quietly as changes occurred in their neighborhoods. Personally, I’m an aficionado of architecture and exterior styles, so I keep an open mind – but this latest wave features very large homes without much (if any) landscaping and has challenged even my tolerant spirit.

My meditations here were prompted by an article that appeared in the Los Angeles Times Magazine a short while ago. In analyzing the substance and style of what are commonly referred to as “Persian Palaces” – a term I find derogatory and so will not use further – the text explored some basic characteristics and thought processes behind Middle Eastern architecture and landscaping.

I read the entire article with great interest and reinforced my awareness that there are many distinctive styles operating under the umbrella term “Middle Eastern” – so many that generalizations are hard to make. Whatever the specific features being considered, it was made clear in the article (and in letters to the editor later on) that a lot of people don’t like what they see cropping up in Beverly Hills – the geographic focus of the article. 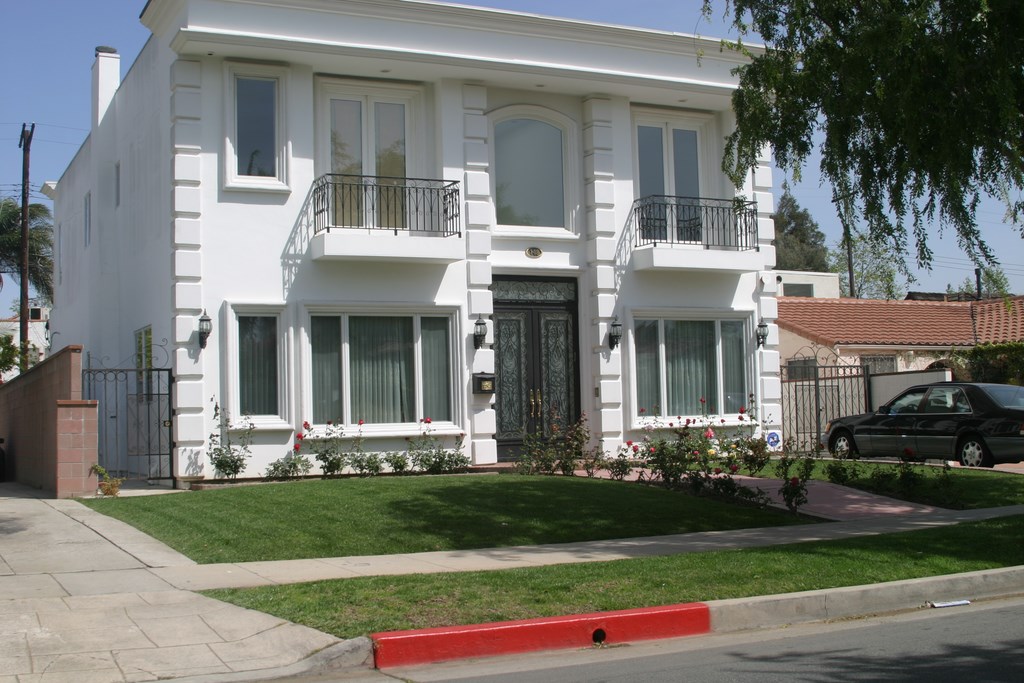 Why is this style so jarring to so many people? Why is it that they seem universally to have turned their heads in resoundingly negative reactions? Why does this Middle Eastern style, more than almost any other style I’ve encountered, strike them as being so awesomely inappropriate for our cultural scene?

I think the answer is actually quite simple, although not readily apparent – and it has to do with how we in the Western world think about the relationship of architecture and landscape by comparison to Middle Eastern cultures. In fact, by the time I was finished reading the article and rolling through my own observations, I had gained a new awareness of why these residences are the way they are.

In essence, the style is characterized by considerable levels of ornate detailing and places the ultimate premiums on allowing the façade of the home to be quite prominent and on enabling as much light as possible to reach the home’s interior. Thus, planting is kept to a minimum.

Homes with those two characteristics provide their owners with tremendous pride – much more so than a beautifully tailored landscape ever would. And of course this reflects a cultural background based on life in hot, arid climates – a not-so-minor detail that has attracted many of these immigrants to the Los Angeles area.

What isn’t considered, of course, is that Westerners have fixed it in mind that Los Angeles has a Mediterranean climate, not a desert climate, and assume that lush landscapes should be the rule. Where the newcomers want light and warmth, long-time residents crave shade and relief from warmth. It all began making sense to me.

For all that, there’s still a problem for me here – a struggle with my belief that architecture and landscapes need to work with their surroundings rather than stand in denial of them.

My objection isn’t that this influx of Middle Eastern styles obliterates or ignores given topographies or surroundings so much that it leads us down a path that promotes less green in our environment. I’m not a tree hugger in the conventional sense, but I do believe we all benefit when there’s as much green as possible around us. Especially in a smoggy place such as Los Angeles, it’s a scientific fact that green is good.

Just the same, I’m not proposing doing away with any style of architecture that the majority of us don’t like. On the contrary, I’m suggesting that we need to embrace new styles and the introduction of distinctive styles from established cultures.

While I’m comfortable with architecture that blends into its surrounding environment and landscaping, I’ve long been aware of plant-free approaches to architecture that have nothing to do with the Middle East: This is an architecture that’s made to be confrontational and jarring to common sensibilities, as with Frank Gehry’s homes with their corrugated-metal exteriors and chain-link detailing.

For the most part, however, I believe that architecture works best when it works with rather than in opposition to its surroundings. When you go to a tropical resort, for instance, the buildings tend to hug the ground and let you feel like you’re living in the surrounding environment. If that same resort were 25 stories tall and you were on a top floor, you wouldn’t get the same feel for the place and might have less of a connection to the place.

In that light, the argument goes that if something doesn’t feel right, perhaps we as architects and landshapers should consider whether we are doing the environment a disservice. What, after all, are our goals?

Speaking for myself, I always prefer to create settings that blend architecture and landscaping in ways that soothe observers, but even so, I am aware that each client perceives things differently. Thus, I separate personal preference from professional need and am determined to keep an open mind in accepting the fact that what appeals to one person and is soothing to that person may not soothe or appeal to the next person.

And this holds true whether it’s a deconstructed Gehry or a landscape-free Middle Eastern mansion. Neither may be to my taste personally, but if it’s what a client wants, the client is entitled to the final word. (Also, keep in mind that in these instances, nobody’s forcing you to work with a particular client.)

This is why we’re surrounded by a universe of styles and variations on each: All of us have different ideas about what is appealing. It’s like menus in restaurants: We all like having choices!

As watershapers and landshapers, we must always be aware of those differences and be clear when designing and installing environments exactly whose interests we’re serving. Are we working with our preferences? Or are we serving our clients’ needs, interests and tastes to the best of our abilities?

To my way of thinking, the goal of good landscape design will always be to fuse land and architecture, but I keep doubling back to something I’ve said time and again in these pages: You need to know your clients and be clear about what’s important to them. Moreover, just because a landscape style (even a plant-free one) doesn’t appeal to you, that doesn’t necessarily make it wrong.

If we try to understand what is important to each client, we have a better chance of developing successful landscapes. No, we can’t please all of the people all of the time, but we can please most of our clients (if not always their neighbors) if we approach our work with an open mind and a cooperatively creative spirit. Yes, we can help them understand what they’re doing and the fact that some may take issue with their choices, but ultimately, the decisions are theirs.

Now I find myself looking at buildings and styles that up until now just seemed “wrong” to me on some level and consider whom they were designed to please and their cultural background, wants, needs and desires. I don’t always end up liking what I see, but I wonder if there wasn’t some astute designer who took the clients into consideration and delivered precisely what they wanted by way of a landscape.

I still believe it’s a good idea to guide clients to design and build something that blends into the surrounding neighborhood, but now I’m trying to see possibilities in new approaches to ingrained ideas.