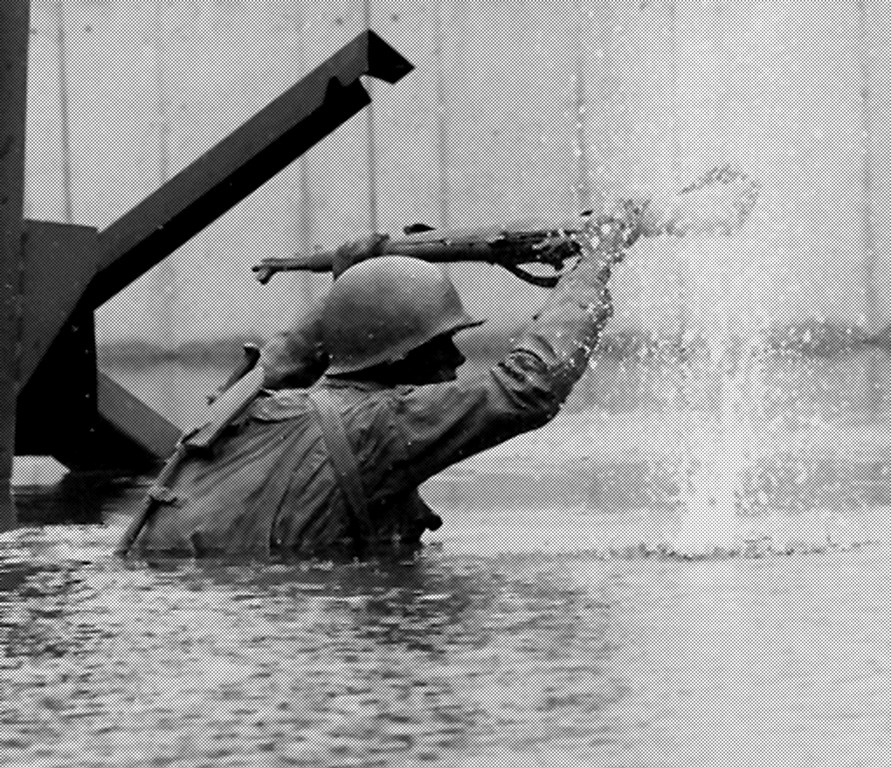 When the Higgins boats carrying allied troops slapped their gangways into the cold sea 60 years ago this month and released their human cargo onto the beach, withering machine gun fire greeted the soldiers from German bunkers high above the beach. Before the day was over, 6,603 Americans had lost their lives in what became known as D-Day – the start of the allied invasion of Nazi-occupied Europe.

When planning started for a National D-Day Memorial to be built in Bedford, Va., the project’s consulting engineer, Lawrence Perry & Associates of Roanoke, Va., contacted us at Roman Fountains to design a commemorative watershape. We were pleased and excited by the opportunity, but as the project moved forward, our excitement was replaced by a tremendous sense of responsibility and our awareness of the need to handle the project with the utmost levels of sensitivity and respect.

Not only were we asked to design the hydraulic, mechanical and electrical systems for a unique watershape, but we were also being engaged to participate in encompassing and interpreting a historic event that forever changed the world. As the work moved forward, everyone on the project team was profoundly aware that we had been entrusted with the memories and deep emotions of D-Day veterans and their families.

It was a humbling and exhilarating experience.

Our task was clearly defined at the outset by project architect Byron Dickenson, principal of Dickenson Architects & Associates of Roanoke, Va.:

* Hydraulic function and appearance had to be of the highest quality.

* The nozzle equipment had to be invisible, while nozzle performance had to be “visually accurate.” 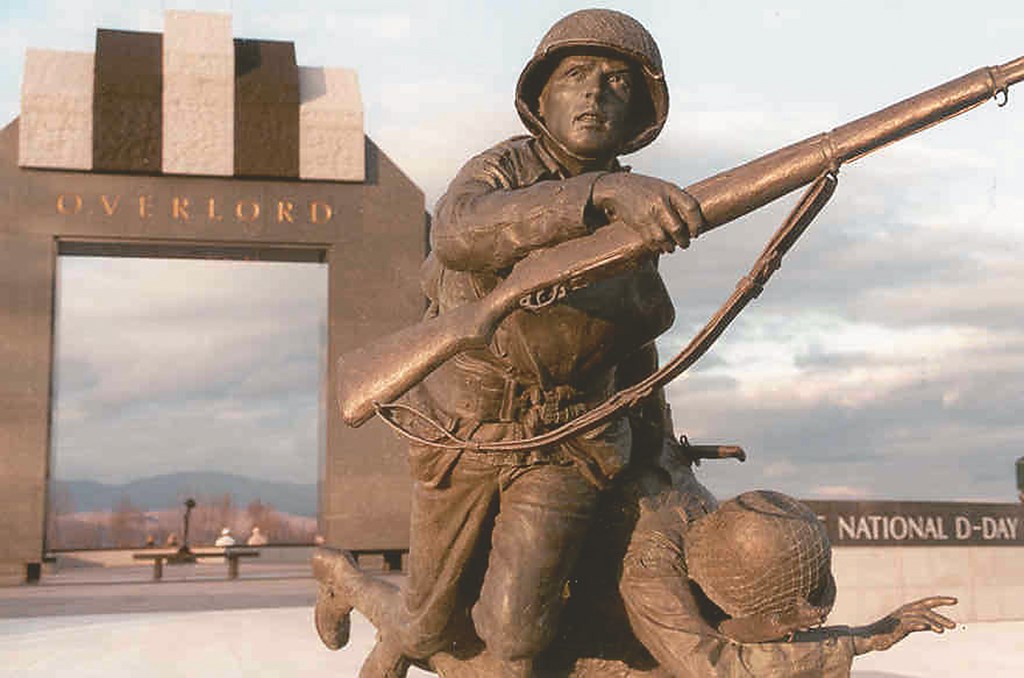 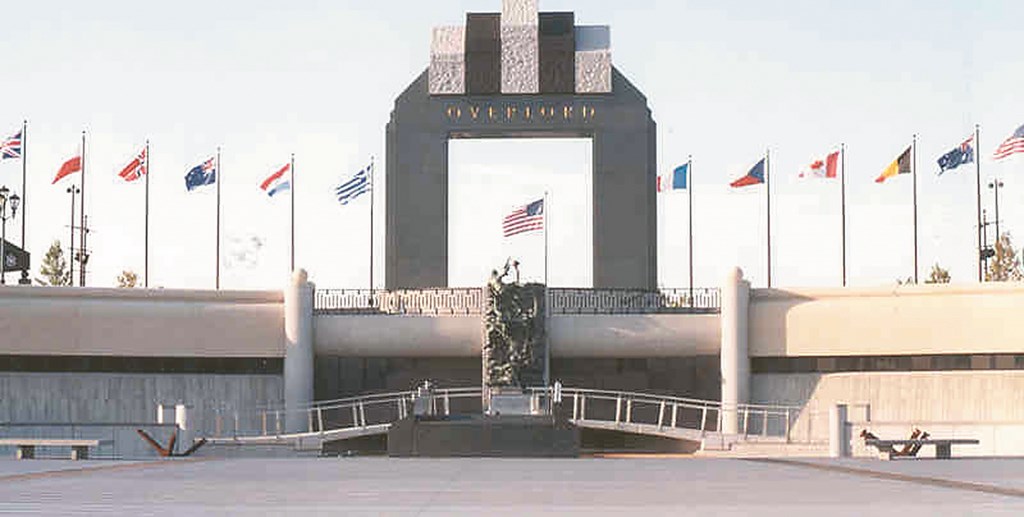 * Operation and maintenance of the fountain had to be user-friendly.

* Because the memorial is a facility for the ages, it was imperative that the system be able to endure the tests of time.

* Public safety was a paramount concern in all areas of the facility.

* The sponsoring D-Day Foundation is supported entirely by private donations, so the system’s design and execution had to be cost effective.

* Finally, all of this was to be executed in a design that essentially represented the event itself in a compelling and engaging way.

The flow of the watershapes and hardscape was critical in meeting these criteria. Working from top to bottom, the first watershape is a massive waterfall cascading over granite tiers flanked on either side by stark concrete forms representing the German bunkers. (These bunker sites also serve as observation platforms for visitors.)

The waterfalls flow into a receptor pool, where the water collects for re-circulation back to the falls. In that pool, a fixed amount of water is allowed to flow gently over a dispersion block and onto a “beach” simulated with a sand-colored, exposed-aggregate concrete.

As the water flows across the beach, it trickles into a watershape known as the “invasion pool,” a large reflecting basin containing rusted steel landing obstacles and a stylized Higgins boat constructed of large, black granite slabs. In the invasion pool are twelve randomly dispersed, air-powered, micro-shooter nozzles that are designed and programmed in sequence to periodically “shoot,” giving the appearance of bullets striking the water. To add to the realism, some of the nozzles are pointed in the direction and match the angle to the concrete bunkers.

Hovering over the entire “battlefield” is an imposing, 45-foot tall arch of black and white granite inscribed with the word Overlord, the allies’ code name for the Normandy landing.

One statue, christened “Death on the Shore,” depicts a lone, fallen soldier with a bible falling from his backpack. Another, “Across the Beach,” depicts a soldier dragging a wounded comrade toward cover, and another, “Through the Surf,” depicts the bust of a soldier wading toward shore with his rifle raised overhead. The water trickling across the beach ripples and pools around these figures as it moves to the invasion pool. 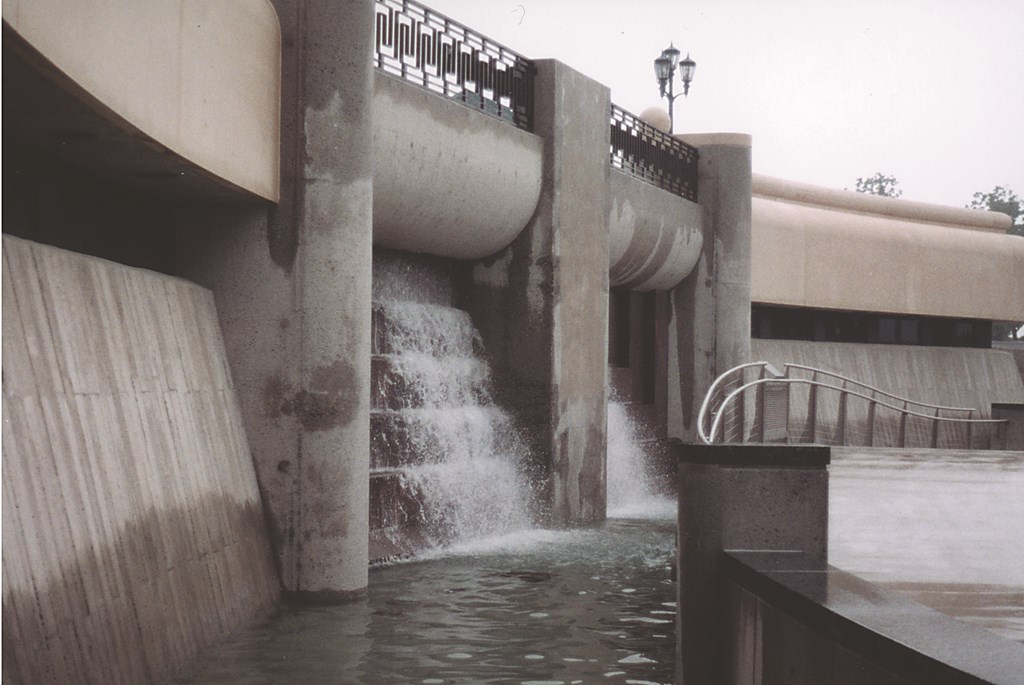 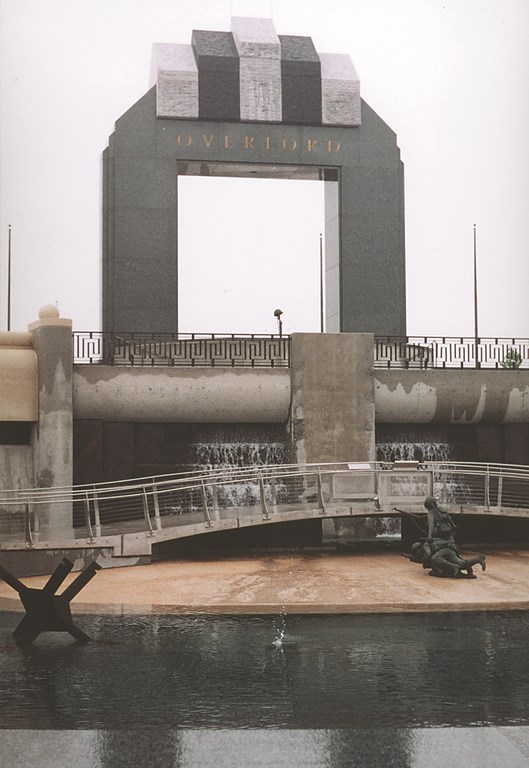 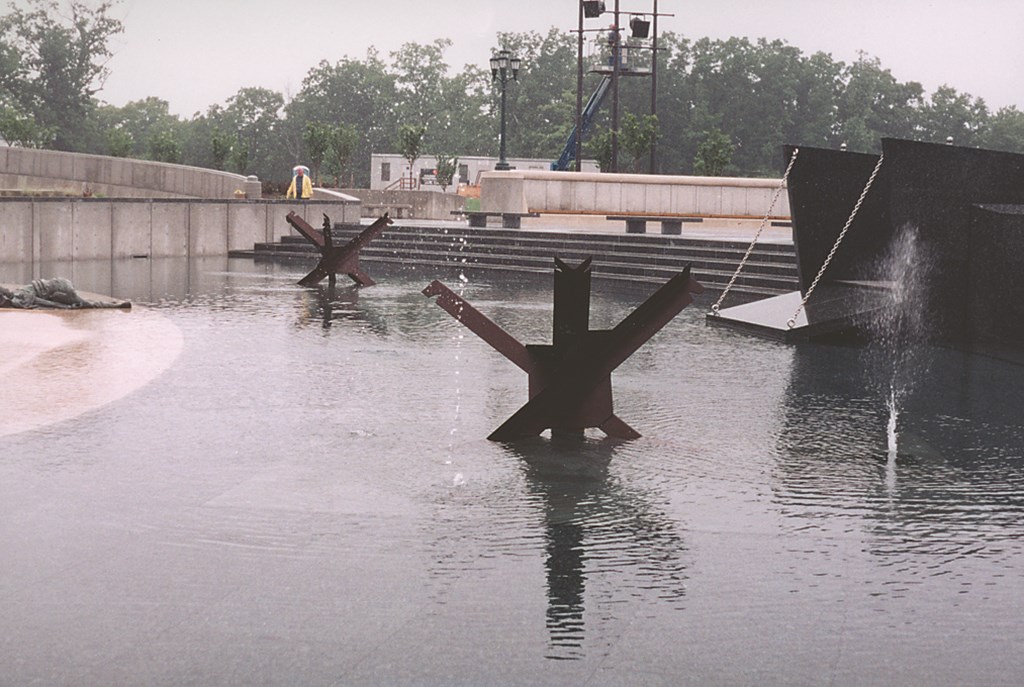 The chief sculptor for the various statues of the soldiers at the memorial was Jim Brothers of Heartland Bronze Foundry (Lawrence, Kan.).

The facility also includes a variety of other displays arranged around the periphery of the waterfeature. To the seaward side of the beach area is the Airborne Plaza, created to honor the contribution of the air forces to the invasion. At this point, an Aeronca L-3 reconnaissance plane is on display, bearing Operation Overlord markings on its wings and fuselage. Propellers from a C-46 transport plane (of the sort that ferried paratroopers and gliders over France during the invasion) are also on view. In the future, these displays will be replaced by an abstract aviation sculpture.

To the right of the waterfeature is the Naval Plaza, which includes a temporary display of a Danforth anchor, the 10-foot-tall, 8-foot-wide anchor first put into service in 1943 and used extensively during World War II on transport ships for landing craft. (The anchor is on loan from the Mariners’ Museum in Newport News, Va.) Also on temporary display is a 1942 Coast Guard bell, on loan from the U.S. Coast Guard in Cape Hatteras, N.C., and honoring the Coast Guard’s role in delivering troops to the beachheads and rescuing stranded soldiers. Another abstract sculpture will replace these temporary displays before long. 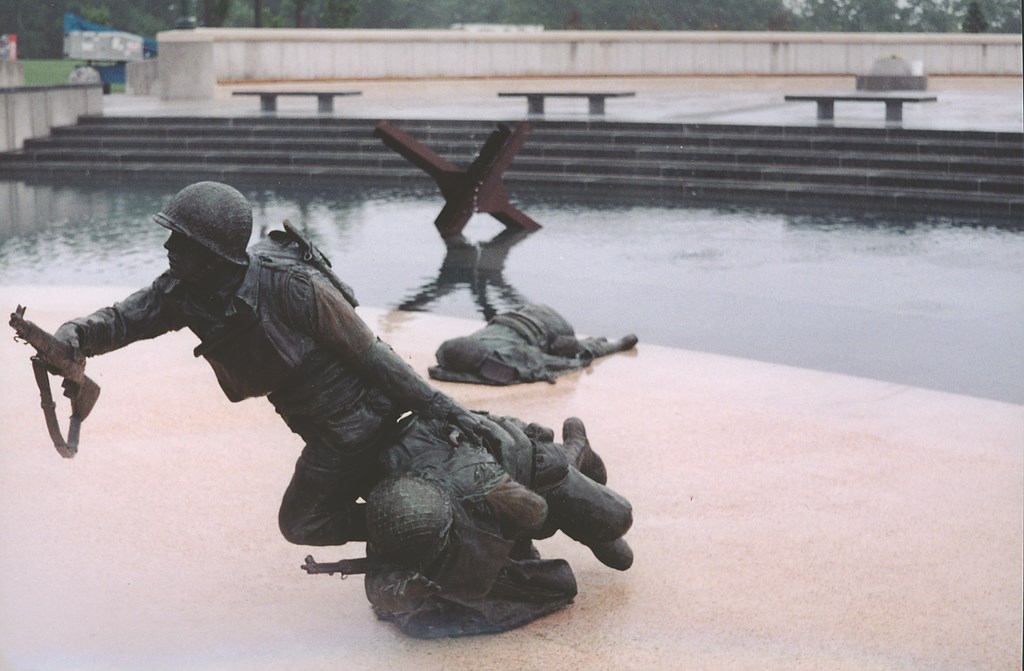 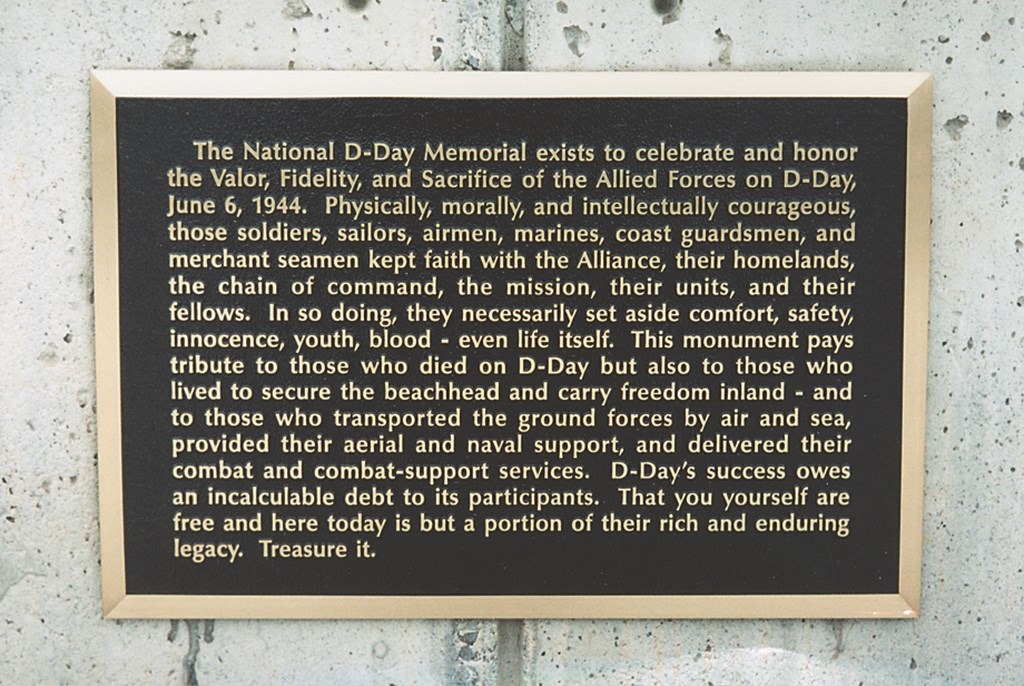 In the foreground in front of the beach is the English Garden. Designed to represent the flaming sword seen on shoulder patches of the Supreme Headquarters Allied Expeditionary Force, the space also features bronze portrait busts of British and American officers in the command group mounted on pedestals along the garden path.

In the center of the waterfall stands a granite structure with a statue called “Scaling the Wall,” a 20-foot-tall tribute to U.S. soldiers who fought and died while climbing the sheer cliffs of Pointe du Hoc in Normandy to capture that position.

Beneath the arch stands “The Final Tribute.” The work of Kansas sculptor Matt Kirby, it depicts a rifle dug barrel-first into the ground and topped by a helmet – a grim reminder of the temporary graves for soldiers who fell that day in combat.

Bedford was chosen as the site for the memorial because the community was hit harder than most by the invasion.

A farming community with a population of 3,200 in 1944, 19 of the town’s 35 soldiers died during the first 15 minutes of the invasion, and four more lost their lives in the days that followed. In fact, Bedford has the dark distinction of having experienced the most D-Day casualties per capita of any community in the whole of the United States.

The memorial was dedicated June 6, 2001, in ceremonies attended by dignitaries including President George W. Bush and many of the brave veterans who participated in the invasion. In all, 22,000 people were on hand.

In his remarks, D-Day Foundation chairman Bob Slaughter of Roanoke, Va., remembered scurrying across Omaha Beach under withering gunfire more than half a century earlier. He recalled stopping to clean his rifle, fouled by sand and seawater, and said, “It was then that I began to examine the extent of the hammering we had taken. It was there that I realized the bloodied price that we would pay for freedom.”

Jon Mitovich is president and general manager of Roman Fountains, a designer and manufacturer of fountain-system packages and components based in Albuquerque, N.M. He graduated in 1976 from Southern Methodist University’s Cox School of Business in Dallas and has participated in seminars on fountain and pool design at UCLA and Harvard’s Graduate School of Design. Mitovich is a member of the American Society of Landscape Architects, the Construction Specifications Institute and the National Spa & Pool Institute. He has conducted classes and seminars on the fountain business and fountain design for various ASLA and NSPI chapters to help watershapers understand the origin, history and application of water in architectural environments. He also has written for a variety of trade publications, including WaterShapes.