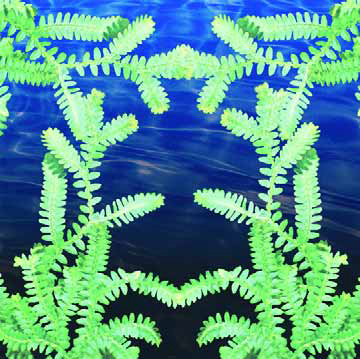 Very often when I’m selecting a plant palette with a client, I’ll hear the words, “I hate ferns.”

I’m not sure what it is about these botanical beauties that evokes such a visceral reaction from people – except maybe that they were overused in floral arrangements during the 1970s and 1980s? I’m not sure what’s going on here, and if any of you know a soild reason for this dismissal, please educate me!

For my purposes, ferns are one of the most versatile plants available. They typically prefer partial to full shade, which is quite useful and makes them great fillers in woodland areas where nothing else seems to grow – although you should probably amend the soil if you place them in a shady area where no other plants have prospered.

They range in texture from extremely soft to quite coarse, allowing them to be used in a variety of styles and settings, and they also come in a wide array of colors and sizes. Ferns such as the Cinnamon Fern, while not readily available, even have great fall color, while some others come in wonderful shades of bronze, gray, blue and more.

The bottom line is that there’s a fern for almost every design.

The key point to remember with ferns and watershapes is the fact that these plants do best in shadier locations. Most will burn when placed in full sun, leaving unsightly brown foliage.

That usually excludes them from use around swimming pools designed for sun-worshippers, particularly when you consider reflections and added heat off the water. At the same time, it makes ferns an ideal choice for areas around woodland streams, ponds, brooks and other well-shaded watershapes.

As is the case with grasses, ferns can be planted up against any watershape. Some varieties are specifically suited to growing in water or swampy conditions. They easily obliterate the edge of a pond by draping over its lip and can even survive dipping into chlorinated water without creating chemical nightmares for service technicians. As humidity-loving plants, they are also great for interior atriums – especially ones with watershapes that keep the air humid.

As much as I love them, however, ferns are like any other category of plants in that using them alone will result in a boring or flat design. As always, you need to mix textures to create a balanced overall appearance.

Microlepia ferns, for example, have a softer texture and grow to three or four feet tall and about five feet wide – perfect for mixing with azaleas (medium texture) and agapanthus (coarse texture) for a woodland feeling. Placed among larger-leaf plants, these ferns also support a tropical feel.

In most cases, for example, you’ll find that the typical green, soft-textured fern works well in setting off other plants: It’ll tend to blend into the setting rather than stand out as the focal point.

With more unusual varieties, such as those with variegated, bronze, gray or bluish foliage, ferns definitely can be used as the focal point – so long as you don’t overwhelm the design by overusing them. Remember: When incorporating any plant that is capable of standing out on its own, keep balance in mind and err on the side of using fewer plants of that variety.

I probably receive every plant catalog known to modern man, and typically I find that the ferns available from them aren’t grown by the average nursery.

I can’t tell you how many times I’ve spotted a fern in a catalog that’s the perfect specimen to complete a design, only to find my nurseries don’t have it and can’t get it from any of their growers. (They’ve even had the nerve to laugh at me a few times when I’ve asked for a particular fern over and over again – as is the case with the Cinnamon Fern. I guess that’s the price I pay for being a visionary in the landscape world!)

I have found, however, that once I start asking for a particular plant, it seems to be available in the nursery three to five years later. It’s a function of supply and demand: If a fern’s in the catalogs, more designers will see it and ask for it, making it lucrative enough for the nurseries to carry it.

You can, of course, order whatever unusual varieties you want from the catalogs. The only problem I’ve encountered in doing so is that the plants are generally quite small and only slightly established. You therefore have to take your chances and buy plants with the thought that you’ll have to care for them more closely than those you might buy from a local nursery. Sometimes, it’s worth the effort.

Aside from the suggestions I’m about to give you, I urge you look through the shade houses at your local nurseries. Each one carries different varieties, and you never know what gems you might find hidden away under other plants.

As opposed to other plant categories (such as grasses), my fern picks are fairly limited and lean toward tried-and-true varieties that seem to do well in every garden in which I’ve ever placed them. As always, I’m in Southern California, so remember to check with your garden guides to see if these are appropriate selections for your climate.

[ ] Microlepia Fern. As far as I know, this plant doesn’t have a common name – although it is, without question, the easiest and best-looking fern I’ve had the pleasure of planting (particularly in my area).

It does best in mild climates placed in partial or full shade. I have one specimen in my yard that is four feet high and five feet wide and after eight years even does well in drought conditions. It’s a great, soft-textured filler that adds dimension to any design and occupies shadier spaces without overwhelming its neighbors.

[ ] Asplenium bulbiferum (Mother Fern). For smaller spots, I love using this fern. It’s great for borders, growing no more than four feet high and about as wide although you see them more commonly at about two feet by two feet.

Mother ferns are more temperamental than Microlepias, requiring a rest period from fall to spring – meaning it will have a more deciduous appearance during that time. So plant it in a location where it’s surrounded by foliage that will hide it in winter – or try it in an interior atrium, particularly one with a watershape that will provide it with ample humidity.

[ ] Polystichum munitum (Sword Fern). This fern was quite extensively used from the 1960s through the 1980s, and it’s the perfect choice for bordering a woodland watershape. It has a more upright appearance than Microlepias or Mother ferns and will not drape over, which means it won’t help much if you’re trying to soften the edges of a pool or pond.

Its biggest drawback is that it spreads by underground runners, so once it takes over an area, it’s hard to control or remove without major excavation. For that reason, I would avoid placing it in a border where it has the opportunity to choke out neighboring plants. Its underground runners might spell trouble for pond liners, but they’re not strong enough to break through a gunite shell or concrete decking.

[ ] Woodwardia fimbriata (Giant Chain Fern). One of the larger varieties of ferns, this is quite similar to the Microlepias and is well suited to bordering ponds, brooks and streams in woodland settings. This is also one fern that can take more sun if it’s placed in a wetter environment.

[ ] Adiantum (Maidenhair Fern). These ferns require more care than Microlepias and Woodwardias, but they’re worth it: Their soft leaf appearance and gentle form are a great addition to any design.

Typically growing only one to two feet tall and about as wide, these are also particularly well suited for interior atriums with watershapes – they thrive on the humidity. I don’t recall ever seeing a terrarium in the ’70s that wasn’t planted with one of these.

[ ] Dicksonia Antarctica (Tasmanian Tree Fern). I have a hard time with these ferns. They’re great when they get to about four or five feet tall and can be underplanted, but when they grow taller than that (which is what they want to do!), all they are is trunks that take up ground space.

True, they do provide nice shade for lower-growing plants, but in my mind, they provide few aesthetically pleasing reasons for leaving them in place – and, in fact, I find that most clients ask to have them removed at some later date. They are slow growers, however, and I would consider using them with the understanding that you might need to replace them down the line.