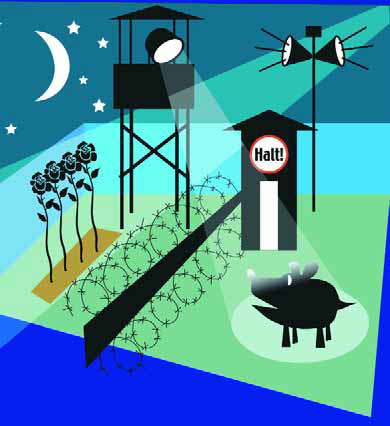 I purchased a home in the late 1980s that backs up to a wooded area inhabited by deer, coyotes, rabbits, rattlesnakes, squirrels and various and sundry other rodents.

I didn’t believe that any of them would come into my yard, so I boldly left the gate at the top of my slope open to test my theory. I awoke the next morning to the sight of a family of three deer feasting on my azaleas and other delectables. Although they did a fabulous job of pruning the azaleas into perfect rounded mounds, I recognized then and there that they wouldn’t coexist with a nicely landscaped garden.

I figured that my fence would never be enough to keep the wildlife at bay forever, so I delved into my many landscape journals and books to find a cure for the common deer and consulted with anyone and everyone who might possibly have any knowledge of how to resolve the issue. There were all sorts of remedies and suggestions, but the consensus was clear: Get a dog!

At the time, I was taking landscape courses at a local college. One day I noticed a poster on one of the classroom doors: It featured photographs of seven dogs with the message at the top, “Adopt me or I’ll have to go to the pound!”

After removing the stake from my heart, I drove over to the kennels where the dogs were kept and there sat Honey (as she had already been named), quiet as a mouse. It was love at first sight. She was a Labrador/husky mix and a dropout as a guide dog for the hearing impaired. (There was a happy ending for all the dogs, by the way. Every one of them found a home that week.)

Frightened by the car trip home, Honey revealed to me that she had a less-than-stable stomach. Before I reached my house, I had already begun to wonder if I had made a rational, appropriate decision.

She was at first terrified to enter the house, but with considerable coaxing I convinced her to explore, at which time she decided my bed was the best place to make herself at home. Her first night was uneventful, and she seemed genuinely happy and comfortable.

At this point, I hadn’t yet gotten around to landscaping my yard – unless you consider ivy and oak scrub to be landscaping – and I looked forward to getting started on my hillside. The ivy served Honey well in place of a dog run, and I quickly found that this was a dog from heaven. I never had to clean up after her!

This, of course, meant that I needed to leave enough ivy on the slope to satisfy her needs and save me from having to buy and use a pooper-scooper. The ivy also provided her with unending hunting opportunities, because as we all know, where there’s ivy, there are rats.

I began by creating broken-concrete planters on the lowest, flat area next to the house, ordering up a load of soil to fill the planters. Once it was in place, I left to run some errands – and came back to find a perfect three-by-three-foot hole that clearly would have reached China had I stayed away long enough. Honey, who had been with me about a month by then, sat proudly by her work, nose covered in dirt.

The thought occurred to me, “We’re the deer really that bad?”

After reprimanding Honey and retreating to my resources for advice, I was able to calm myself down and realize that we both needed to be educated. In the course of the next month, she repeated her digging displays at no fewer than five other locations in the yard and showed that she could scale things down, too, by burrowing into any pots or containers I attempted to plant.

This called for some creative thinking. I couldn’t bear the thought of sending her back, especially considering her loving nature in every other aspect of our relationship, but I finally realized why she’d failed out of the guide-dog program: She was too darned stubborn. Learning this, I knew my tenacity would be needed to prevail.

Honey eventually stopped digging, and because I tried so many things, I’m not certain why she stopped. She may have learned that her behavior upset me, or perhaps it was a “been there – done that” mentality. In any event, we reached a state of harmony.

Here’s what I learned – a set of ideas I’ve been passing on to my dog-owning clients for more than ten years now as the best-available remedies for bad dog behavior in conjunction with having a garden:

[ ] Basic training. We’d all like this choice to work. If you’re lucky enough to have a dog without an overwhelming compulsion to dig, you just might find that the help of a good trainer is all you need to teach the dog what’s acceptable and what’s not.

[ ] Create a barrier. We’ve all seen yellow tape around crime scenes, and I’ve found that even a flimsy barrier such as this will discourage a less-than-tenacious dog. Sometimes just having to get through or around these lines is enough of a turn off. I’ve set up PVC stakes with yellow tape strung between them, and I’ve even used green landscaping tape. (For bigger animals, use more than one line.)

[ ] Bury an unpleasant ‘treat.’ Although I’ve never had success with this tactic, many resources advise placing an animal’s droppings in the holes and lightly covering them. When the dog comes back for more digging, he or she is supposedly repulsed from the area by an unpleasant discovery.

[ ] Use jute. Jute is primarily used in hillside landscaping to stabilize slopes as new plantings establish themselves. Placed on top of the area you want to protect from canine invasion, this rope netting is a great deterrent. Dogs’ claws get caught in the rope (don’t worry, they don’t get stuck), they simply don’t like that experience and they’ll most likely find something else to destroy.

[ ] Pool netting. Manufacturers of pool covers have created a great netting product designed to keep children safe around water that also works quite well as a barrier to animals – particularly if there’s a pond that has become a pet’s favorite feeding trough. It works the same way as jute (with more eye appeal), and eventually any dog will get tired of trying to find a way around the barrier.

[ ] Rocks and boulders. As was mentioned in a previous issue, placing rocks at the bottom of a pond to cover the liner can prevent punctures from a dog’s claws. More important with smaller dogs, a good-sized line of boulders presents an ominous barrier, and you can bring in even larger boulders for larger dogs (if the space is available and the larger sizes work as part of the design).

[ ] Plant mature. The bigger the plant, the less likely an animal will be able to destroy it. Budget is, of course, a consideration here, but a well-established tree or other plant is more likely to survive any root exposure that comes with digging.

[ ] Install an electrical barrier. I know this sounds barbaric, but an electric barrier works wonders in extreme cases of canine waywardness. These systems, which come with a variety of brand names and features, are available in many pet stores. Most string live wires between PVC posts – enough of a deterrent to bring around even the most stubborn animals. (Believe me, after getting shocked myself a couple of times, I wanted to stay out of the planters!)

It’s easy to get angry at a pet’s poor behavior, but keep your perspective and remember that poisonous plants, or plants that might harm your dog with stickers or thorns, for example, are not a good way to deal with the issue. And as far as a lawn is concerned, the best defense against a female dog is a well-fertilized, well-watered, and healthy lawn. I can’t hit everything here, but suffice it to say that there’s much to learn about pets and landscaping compatibility.

No matter which method you eventually end up settling on as the most effective, be advised that they all work around watershapes, too. The only advice I’d offer is to make certain that any barriers you set up against your pools or ponds should be integrated or at least camouflaged in such a way that they don’t distract visually from your design.

After all, the goal here is to find ways to create an environment where our clients and their landscapes can peacefully coexist with pets.