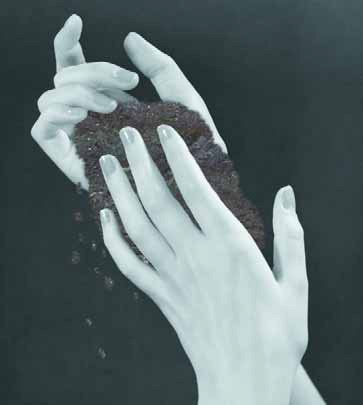 Watershapers are still fairly easily divided into two groups, one with its origins in the landscape trades, the other hailing from the pool industry.

For all the distinctions that might be drawn between them, however, watershapers of all stripes have one very important thing in common: We all work with the stuff we find under our feet on the job site – the stuff we generally call dirt or soil.

Dirt is the more inclusive of the two terms, and unless the contractor is working with a tricky site or faces compaction issues, it is simply what is carted away or rearranged to make room for a watershape. By contrast, soil is a blanket term covering a variety of specific types, and knowing what they are and how to work with them is an essential landscaping skill.

Let’s take a look at why all watershapers should think soil rather than dirt.

THE STUFF OF LIFE

For starters, the makeup of the soil in any garden is critical to its survival.

Soils that allow water, nutrients and other organic material to penetrate and be absorbed through a plant’s root system will sustain plant life more easily than will those without these characteristics. Before launching into any landscape design, it is therefore important to assess the soil composition to determine whether or not you need to adjust the plant list accordingly.

Soil is made up of mineral particles that determine its texture and, thus, its type. It contains some combination of clay, silt and fine, medium and coarse sand, with the proportions of these materials making soils fall into three main types:

[ ] Clay: This is the densest type and has a greater percentage of clay and less sand and silt than other soils. It holds water the longest and has the ability to hold nutrients longer than other soils, so plants desiring moister environments thrive in it. When saturated, clay soil becomes heavy, dense and mucky – the kind of goop that will rip a work boot right off your foot if it’s not laced up tight!

[ ] Sandy: This is the lightest soil and has a large sand component with very little clay, allowing greater drainage and less water retention. Plants that thrive in arid conditions do very well in this soil.

[ ] Loam: This is a balanced soil, somewhere between clay and sandy, with fairly even proportions of all the various mineral particles. As such, it blends the best properties of clay and sandy soils, draining better than clay but not drying out as fast as sandy soil. If the soil is loam, you have a greater chance for success with your planting.

So what do you do with the soil you’ve been dealt? The first step is working with your clients to determine the type of plants they want.

If you’re lucky enough to get a client who has a yard filled with loam, you can plant away without thinking too much about which soil amendments you’ll need to add to your budget. But if, for example, your client wants a xeriscape (a selection of drought-tolerant plants that thrive in sandy conditions) and you have a heavy clay soil to work with, you’ll have your work cut out for you in making the extreme transition from clay to sandy soil. At a minimum, this means rototilling sand and amendments in to lighten the soil.

In amending soils, you must also consider that amendments are temporary. They may alter the soil’s composition for an extended period of time, but they will never permanently change the soil from one type to another. For the most part, you’ll do best if you work with the soil as you find it and tailor your design and plants to its characteristics rather than trying to force the situation.

I’ve never been an advocate of using expensive tests to determine soil composition. I think they’re generally unnecessary and actually a bit of overkill, except in cases where an extremely expensive planting is taking place or rare specimens are being grown or where a client with appropriate irrigation and maintenance has been unable to sustain a planting.

(It’s important to note here that I’m talking about testing surface soils for planting suitability – not the sort of deeper, geological testing you need to conduct before putting large concrete and steel structures in a backyard. They’re both called “soils testing,” but they’re two entirely different things!)

I generally avoid soils testing because there are inexpensive and perfectly adequate ways to look at a soil’s texture and use it to determine basic composition and type.

The Sunset Western Garden Book suggests one method in its 2001 edition: “Thoroughly wet a patch of soil, then let it dry out for a day. Now pick up a handful of soil and squeeze it firmly in your fist. If it forms a tight ball and has a slippery feel, it’s predominantly clay. If it feels gritty and doesn’t hold its shape at all but simply crumbles apart when you open your hand, it’s sandy. If it is slightly crumbly but still holds a loose ball, it’s closer to loam.”

Once you’ve established the texture and type of the soil you’re working with, next comes its structure – that is, the way soil binds together to form small clumps.

As previously stated, you can change the structure (at least temporarily) by adding soil amendments. Few landscape designers and architects are experts in this subject, and I know well enough when I get into these areas that consulting with a landscape contractor or another local soils expert is a good idea and cuts the guesswork out of determining which amendments are most appropriate for a given plot of land.

Testing soil for pH is also an inexpensive way to learn a lot about a specific patch of soil. I often resort to it in situations in which a client has had difficulty establishing a planting. A pH of 7 is neutral, while below 7 is acid and above 7 is alkaline. The pH of the soil can affect its ability to allow certain nutrients to be available to the plants.

Where acid soil is present, experts usually recommend adding lime to raise the pH. In alkaline soils, some suggest adding sulfur. No matter the soil texture or type, a soils-specific pH test kit can be invaluable, and there are even cases with certain plantings where calling on a laboratory to conduct these tests can be a good idea.

Some plants, including azaleas, rhododendrons and camellias prefer a more acid soil, and they are so popular and so widely used that you can easily find fertilizers and amendments made specifically to adjust soil pH to meet their needs.

And if you have any doubt that pH makes a difference, just consider hydrangeas: The flowers change color based on the soil pH, with blue flowers produced under strong acid conditions and pinks and reds appearing where pH is higher. There are amendments specifically designed to help gardeners produce these colors. (I may be in the minority in preferring to let nature take its course.)

As I mentioned above, I generally defer to my landscape contractor or another expert on local soils for advice and installation when it comes time to amend the soil. If you want to tackle this part of the project on your own and need to have your questions answered or your approach endorsed, most wholesale nurseries or garden centers are generally good sources of information and advice.

The choices are limitless when it comes to amendments. Soil can be altered chemically or organically, with everything from store-bought amendments to homemade composts and “teas.” There are also great sites on the Internet that explain composting using leaves and organic materials from your yard as well as the use of worms and kitchen scraps. Many cities have non-profit organizations that seek to enhance the earth and the environment by teaching people about their plants and how to tailor the soil to their needs.

Once it is properly amended, proper fertilizing lends the soil a hand in sustaining plant life by periodically reintroducing nutrients that have leached out over time. That’s the topic we’ll discuss next time.