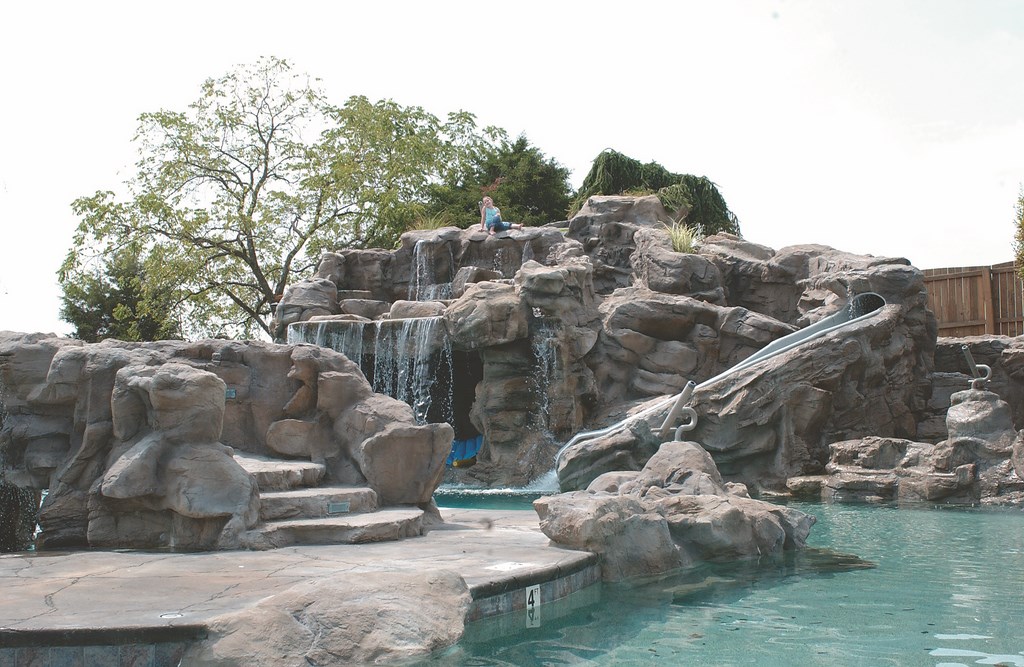 Finishing up a project of any size is all about the details.

From the final touches on the artificial rockwork and the placing and adjusting of lights to the fine tuning of the circulation system and signing off on the equipment room, the art of fine watershaping ultimately boils down to applying the same stringent standards for excellence that you bring to the beginning and middle of the project straight through to the end.

Of course, it’s virtually impossible to complete a project of this magnitude without having to make significant changes and adjustments (or, worse, reconstructing or reinstalling things along the way). The best means of coping is to plan and install to perfection or near-perfection at each step. This is why, as an organization, we look at every aspect of construction as part of a grand process of making a long, smooth transition from “project” to “finished product.”

It also helps, as in this case, to have a great client.

In a perfect world, we could create plans that accommodated all contingencies and ended up being built exactly as designed, but on big projects there will always be changes and challenges that arise, and our work on a project first discussed in the September 2004 issue (page 34) was no exception.

In this case, we were hampered to some extent by the contribution of a builder who’d been on site before we arrived – but were ably assisted by a homeowner who was intimately involved (and stayed that way) from start to finish. The fact that he hung in there with us and was happy to discuss various issues as they arose gave us the confidence that comes with everyone being on the same page. Indeed, we developed a rapport that went well beyond what we usually witness with our high-end clients.

It’s interesting to consider what we might have done differently had we been involved with this project from the start.

For starters, the main thing we would have done would have been to site the project differently. Rather than place the entire structure at the top of the hill above the home – right at the property line – we would probably have pulled the entire layout down toward the house, leaving the crown of the hill as a backdrop.

This would have enabled us to create rockwork and cascades above and behind the grotto and slide structure that would have blended them in more effectively with the surrounding landscape. As it was, we had few options beyond trying to soften the profile of the main rock structure by fanning out the rockwork over a broad area and creating a series of intricate waterfalls and planting areas.

Upon further reflection, we also probably would have relocated the spa to a more forward position away from the rock structure. This would have enabled us to make it larger and more elaborate.

All of that said, we’re thrilled with the finished watershape, and so are the homeowners and their four teenage and pre-teen sons, who have already made big use of the pool for entertaining their friends. And when it comes to fun, this pool really does have it all, from the slide, grotto and beach entry to the island, interactive waterfeatures, music system and colorful lighting. It’s a space made for good times.

We’re now working with homeowner on phase II, in which we’ll be working with the area around a new guesthouse and will extend the rock structures away from the pool area and down the hillside. There are even some speculations about creating a pond/wetlands area – and this time we’ll be there from Day One.

The features associates with the free-form pool and rock structure are uniquely dedicated to family fun, from the strategically placed water cannons (top row, left) to the slide that passes through a dark tunnel before emerging and dropping to the water (top middle left and middle right). 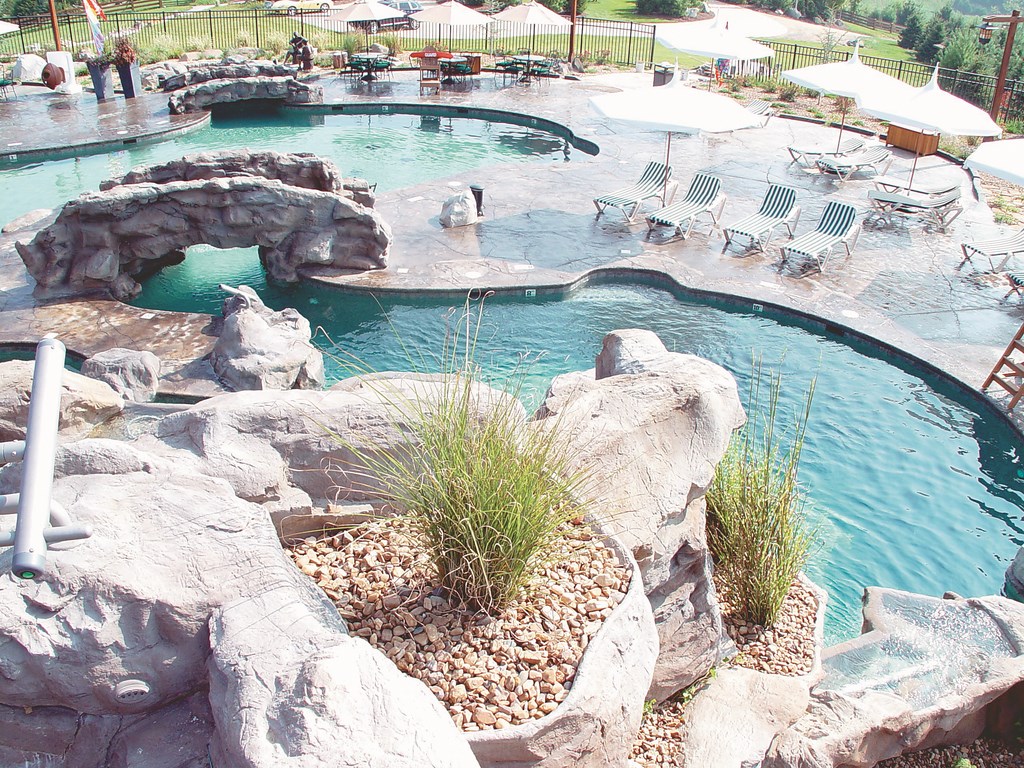 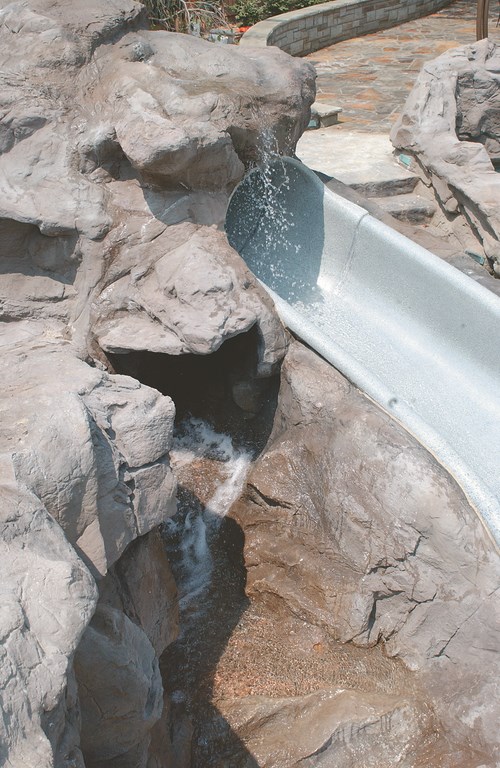 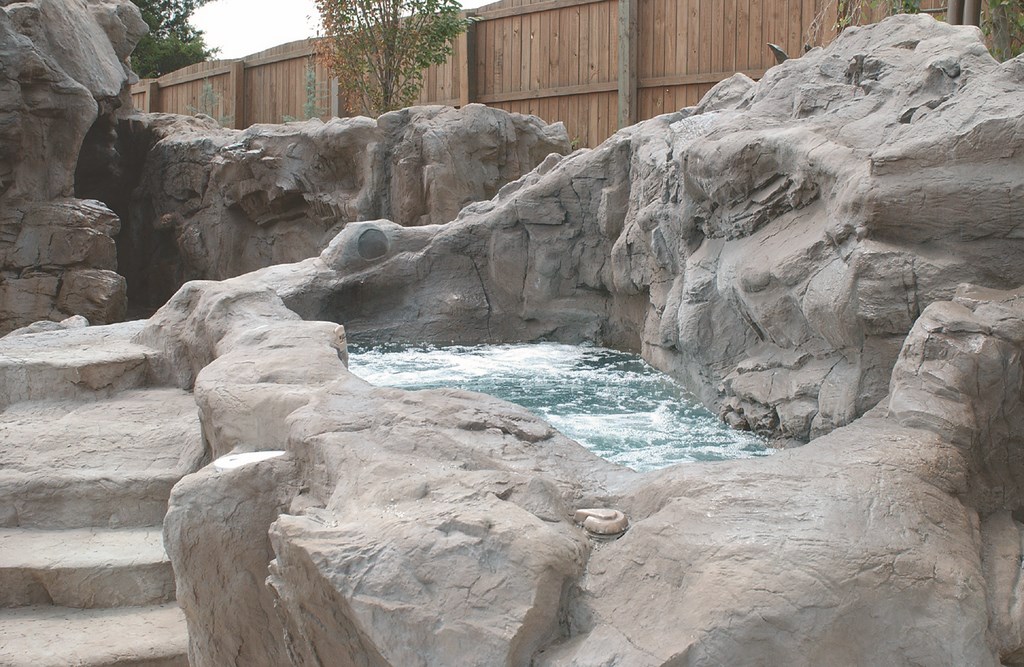 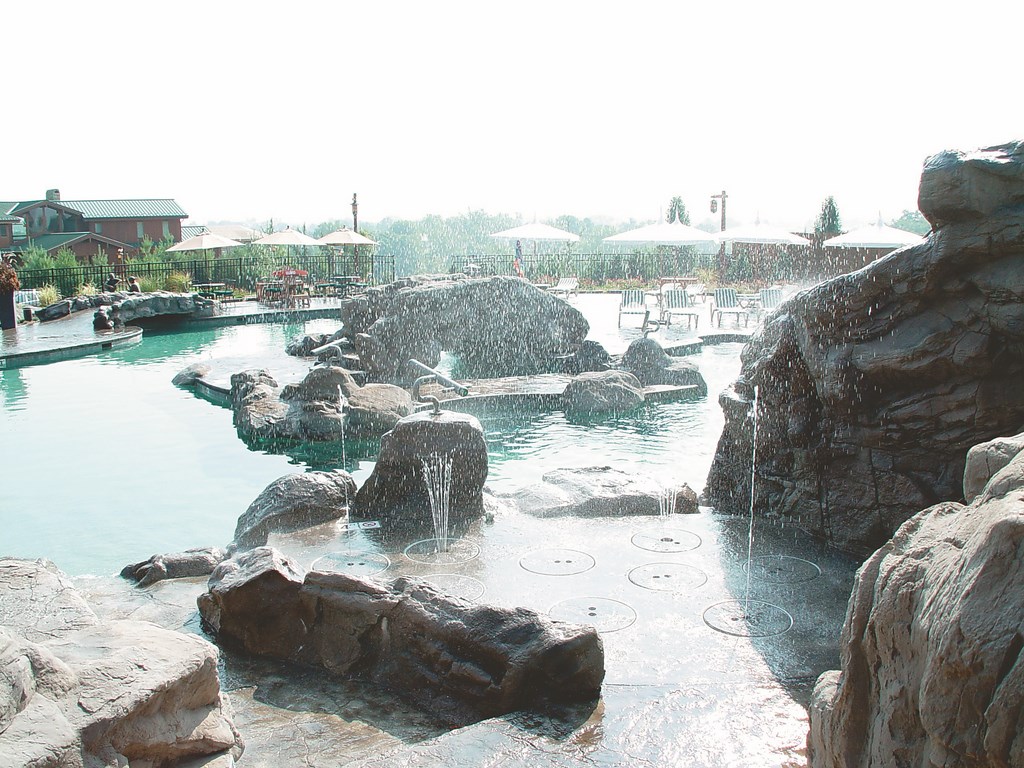 Off to one side of the rock structure is a large spa (top right) outfitted with a sound system Looking toward the spa from the top of the rock structure, you see (just beyond the slide) a plume rising from the jumping-jewel waterfeature (bottow row, left), a series of jets programmed with display routines but also set up for interactive, motion-related play (bottom middle left).

While the entire backyard seems dedicated to vigorous activity, the design also incorporates characteristics that appeal to more grown-up sensibilities and the adult impulse to seek relaxation in the great outdoors. 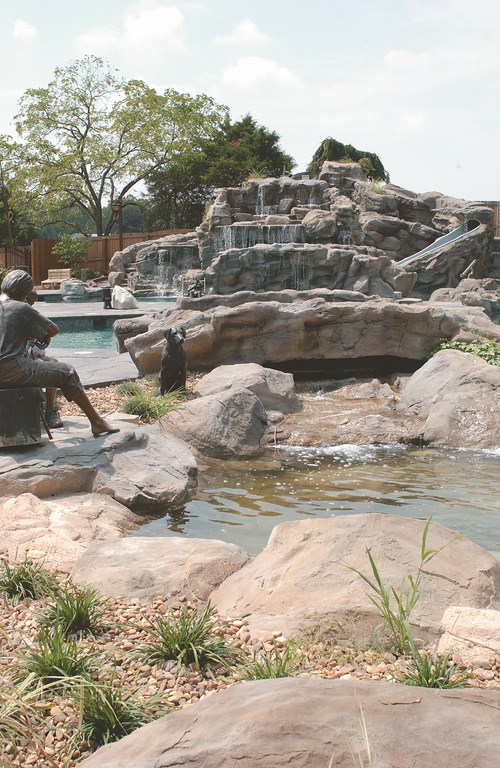 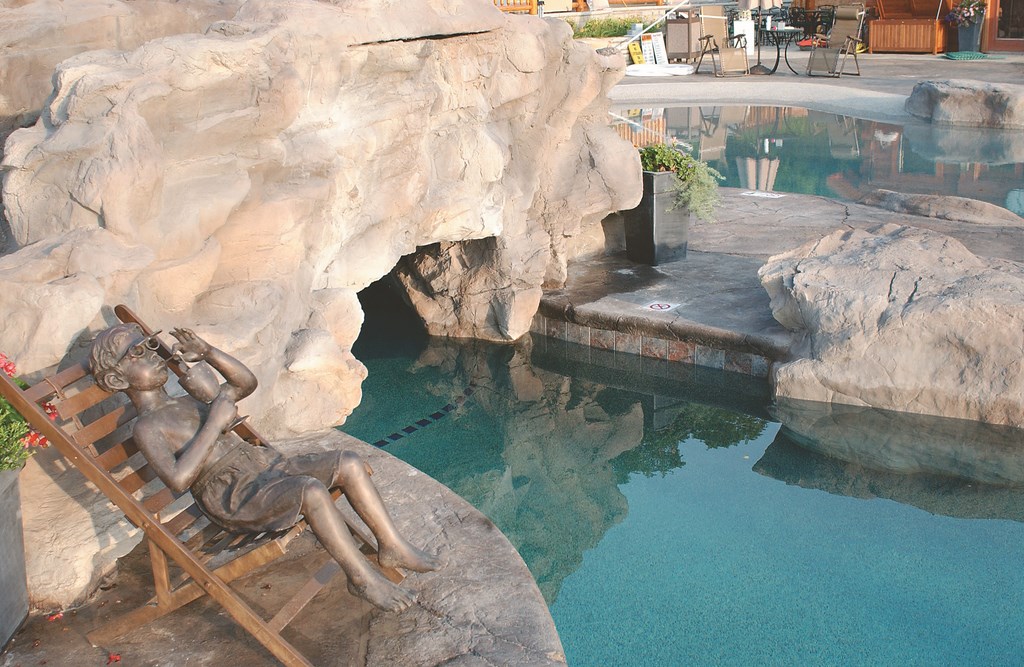 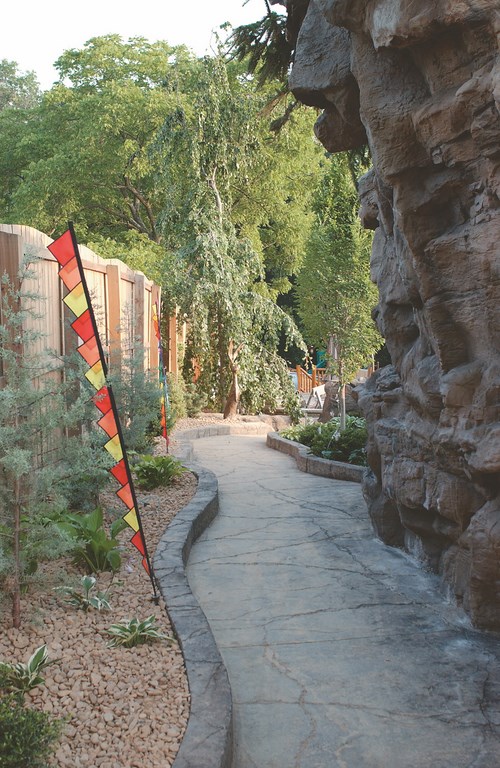 This impression is reinforced by sculptures of leisurely pursuits from fishing (left) to sunbathing (middle left) and by peaceful pathways behind the rock structure (middle right) and spa (right).

Our firm prides itself on sophisticated artificial rockwork, and our skills are very much on display from wall to wall in this project. We do all we can to make certain our work mimics indigenous formations found nearby, and our aim in fashioning grottoes and caves (left and middle) and creating veined and fractured decks (right) is always to make it difficult to tell real from faux.

To recreate the effect of mist rising from a rustic pond, we equipped the entire pool area with fog machines that give the setting an otherworldly appearance, day or night. The effect is certainly visual (left), but there’s an element of adventure introduced when the sun goes down (middle), and there’s no doubt that the mist helps everyone cool off under blazing summer skies (right).

For all the amenities, features, sculptures, details, play elements and general exuberance of these structures, the success of any watershaping project has to do with water. In this case, we centered our efforts on setting up areas at depths and in sections allowing for various degrees of action, but given the massiveness of the rock structures, we also focused on softening the edges with lots of water in motion – down the slide (left), across the face of the rockwork (middle left), off the bridge (middle right) and over the mouth of the grotto (right) – and the treat is aural as well as visual.

Mario Abaldo is founder and president of Abaldo Enterprises, a Union, Maine-based design/build firm specializing in extremely high-end, water-centered “total environments” for clients around the world. Abaldo has been involved in hands-on custom work for more than 25 years, having started a successful business as a stonemason at age 15 and declaring that he still “loves the smell of concrete in the morning.” He strives to bring the latest in products and technical expertise to his clients and projects, incorporating such elements as high-tech security systems and fire-on-water effects. He also brings a diverse range of life experiences to bear in his work, from his strong academic background to his love for art and outdoor and underwater exploration.