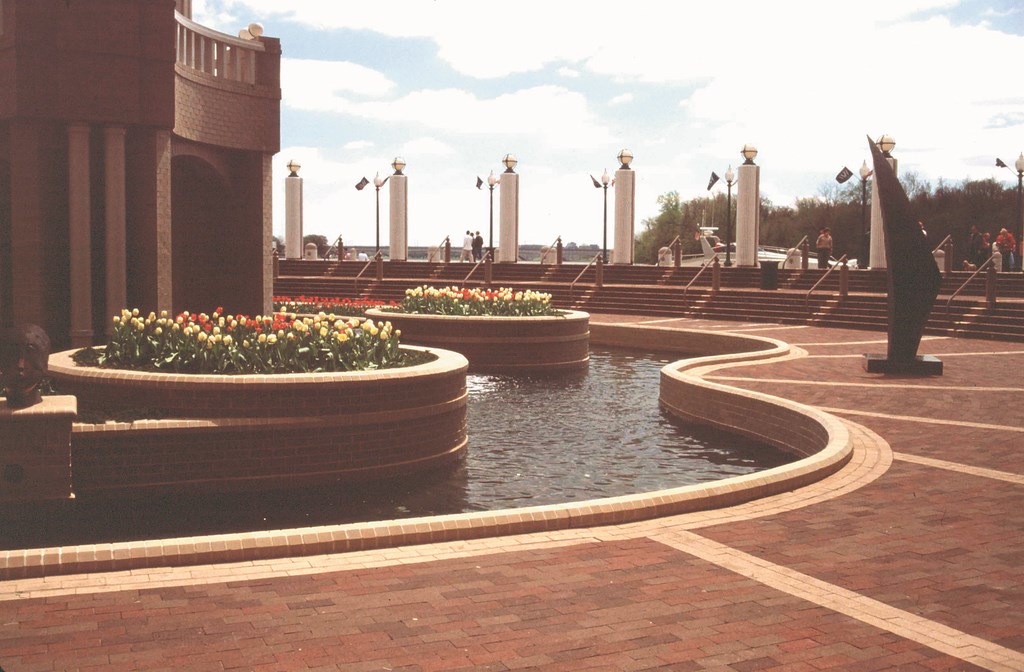 Composition of this article began with an e-mail I received a while ago from a colleague working in Australia. “What,” he asked, “is the maximum allowable depth for a fountain in the United States?” As simple as it sounded, when I took the time to research the issue I found that there was a noticeable lack of definition.

I took the next logical step and called various people I know in the watershaping industry and asked them the same question. Surprisingly enough, nobody could point me to any code, regulation or standard that defined what depth a waterfeature’s pool could or could not, should or should not have.

Even so, we are responsible as designers and builders for understanding and complying with codes in effect in all jurisdictions in which we work. For professionals including landscape architects, architects, engineers and high-end watershapers, those geographical ranges can be very wide indeed.

To keep things from flowing too freely, design professionals are licensed by individual states as a condition for issuing drawings, which presumes that they have studied and passed a test demonstrating familiarity with the state’s requirements for their discipline. While that is all well and good, the water becomes more than a little murky when it comes to fountains.

One of the truths about the fountain sector of the watershaping industry is that there is a general lack of standards that apply directly to the design and installation of these watershapes. Up until a few years ago, in fact, the only code that specifically referred to “fountains” was the National Electrical Code (NEC).

That is not to say that fountains, waterfeatures, ponds and other watershapes that fly under explicit regulatory radar are not affected by codes; rather, it means that there are very few direct references to them and we therefore are left, along with local officials, to interpret codes and regulations as they apply to specific projects on which we are working.

That lack of definition changes from time to time as a type of watershape becomes common enough that regulators pay attention to it. Interactive fountains, for example, are now regulated by a couple of states because the health issues related to their use are similar to those of swimming pools. For the most part, however, the state of today’s codes with reference to fountains is unclear at best in a number of key respects. 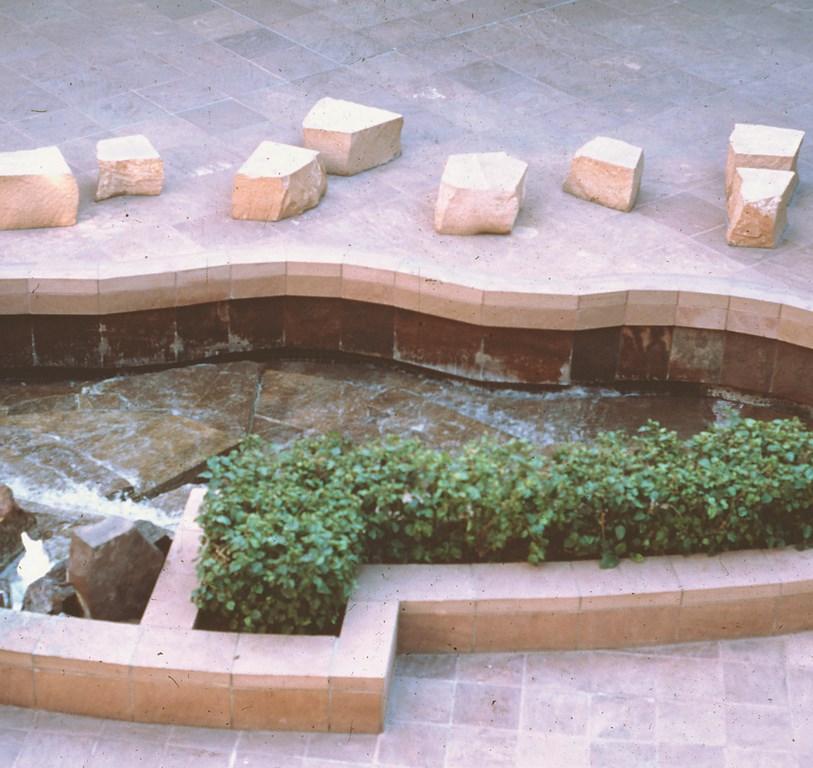 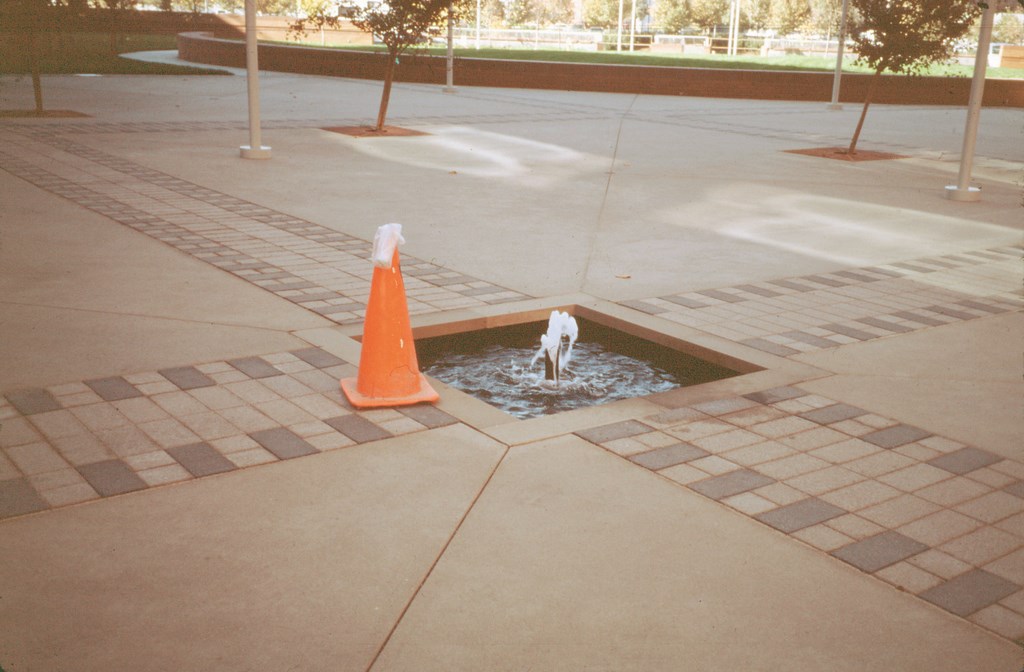 To begin with a specific point, let’s double back to my Australian friend’s question about water depth: Most fountain manufacturers have set up their products for operation in 16 to 18 inches of water – more or less an accepted standard in the industry. I could find no foundation for that standard in the literature, but what I did find leads me to an educated guess about its evolution.

I found direct references to water depth in just two design-oriented books: Craig S. Campbell’s Water in Landscape Architecture, first published in 1983; and the current volume of the Timesaver Standards for Landscape Architecture, published by McGraw Hill, which includes a chapter on “Pools and Fountains” by the late Dick Chaix of CMS Collaborative. Both sources say simply that a fountain’s water depth should designed in such a way that the vessel cannot be classified as a “swimming pool” under the Uniform Building Code (UBC) – a definition by exception if ever one existed.

So I turned next to the 1997 edition of the UBC (Volume 1, Appendix Chapter 4) and found the definition of a swimming pool as “any structure intended for swimming or recreational bathing that contains water over 24 inches deep. This includes in-ground, aboveground and on-ground swimming pools, and fixed-in-place wading pools.” That leaves a fair bit of latitude for fountain designers, and it’s just about all we have to go on.

Based on this definition and coupled with common design recommendations, it would appear that 24 inches would be a maximum “legal” depth for a fountain. Applying this concept to a real-world installation, however, raises other issues.

Let’s presume, for example, that we are building or designing a fountain with a 24-inch water depth and that the vessel has a skimmer. Allowing for the height of that skimmer above the water level (four inches) and assuming adequate concrete cover above the skimmer (two inches) as well as a coping stone and mortar bed (another four inches, give or take), we could easily end up with a 34-inch span from pool floor to the top of the coping. If such a fountain were built into the ground adjacent to a plaza or walkway, both UBC and the Americans with Disabilities Act (ADA) would require the installation of a guardrail around the fountain.

I’ve stretched things a bit to make my point, which is that, depending on the arrangement of the installation, different codes and regulations may come into play as a project unfolds. 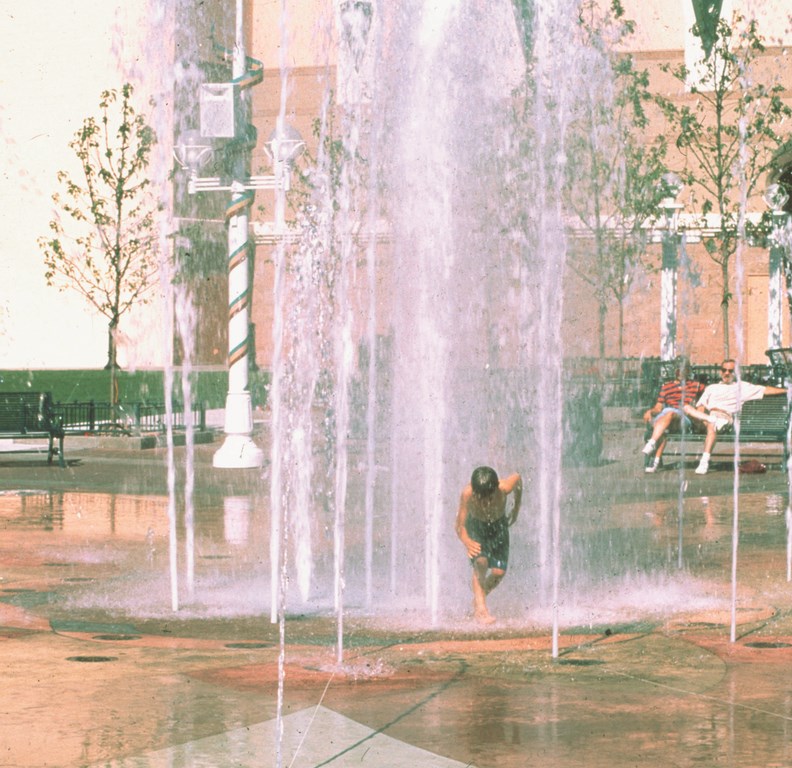 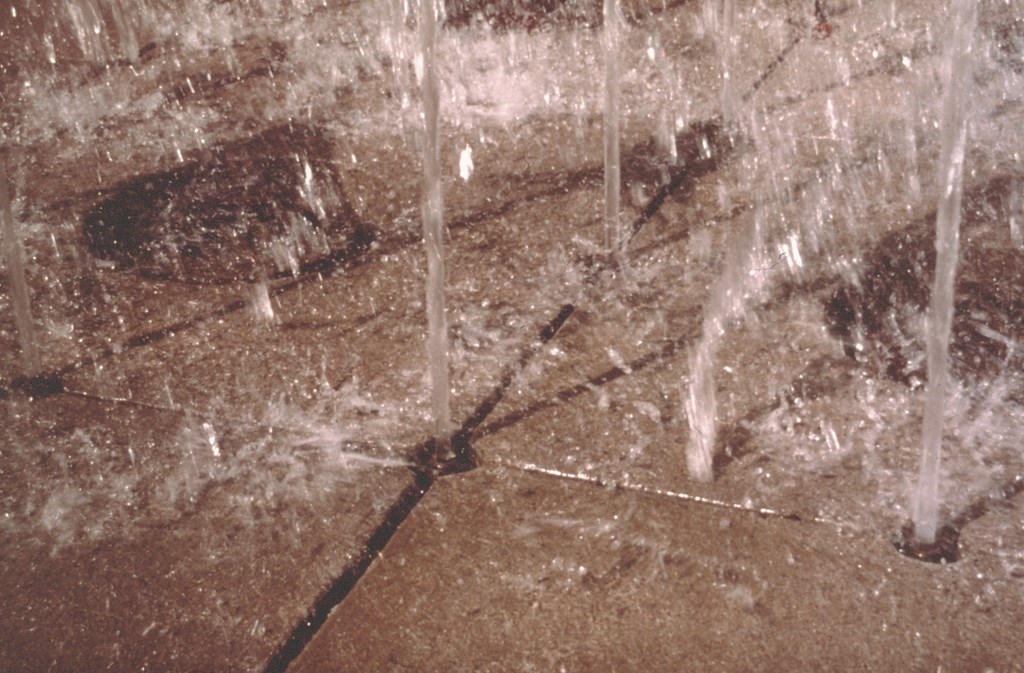 Working through an example such as this one is what leads me to observe that the current 18-inch “standard” observed by the industry developed through consideration of the type of installation just described. This, in other words, is why most fountain equipment is now set up for 18-inch-deep vessels.

Depth isn’t the only consideration around which informal “codes” have evolved for fountains: Let’s take water sanitization as another example.

For the most part, if chlorine is being used, then draining and backwashing of the watershape must flow to a sanitary sewer. If chlorine is not being used, there is the possibility that the drains can be connected to a storm sewer. Experience shows, however, that most municipalities require drains and backwash lines to be connected to sanitary lines, the prevalent thought being that even without routine chlorination, there’s a likelihood that the fountain manager will occasionally broadcast chlorine to control algae.

At the same time, most municipalities want fountains’ overflow systems to be tied to storm sewers, the thought being (with outdoor fountains) that inspectors and/or plan checkers do not want a major storm event to over-charge the sanitary system. To accommodate that inconsistency, agencies are requiring that both drains and overflows be connected to the sanitary system – but with the proviso that the size of the pool must be weighed as part of the decision.

All this does is reinforce the point that it is always a good idea to check with inspectors during the design phase to determine what their specific requirements will be. Any conflicts that emerge should be resolved as early in the process as possible to prevent misinterpretations, reinterpretations and crippling delays down the line.

Equipment vaults bring an altogether different set of considerations into the codes-and-regulations formula. By definition, any underground equipment vault is a “confined space” as defined by OSHA – that is, a space:

[ ] large enough and so configured that an employee can bodily enter and perform assigned work; and [ ] with limited or restricted means for entry or exit (for example, tanks, vessels, silos, storage bins, hoppers, vaults and pits are spaces that may have limited means of entry); and [ ] not designed for continuous employee occupancy. 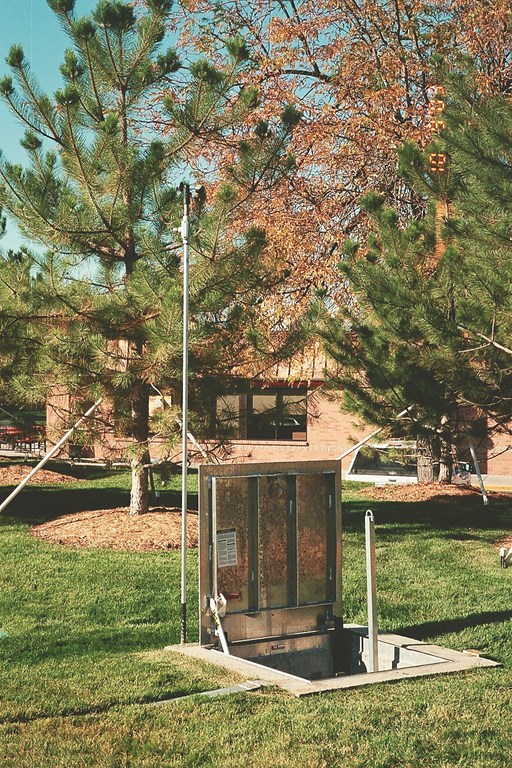 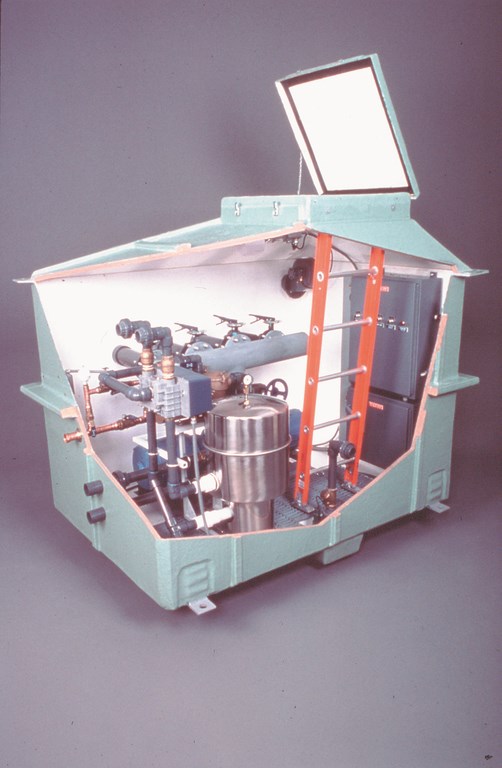 While the confined space itself is not so much an issue, the possibility of creating a hazardous environment within that space can lead to the designation of the vault as a Permit Required Confined Space (PRCS). Should this happen, the requirements to enter the space and perform maintenance are strictly defined and regulated.

One of the issues to consider has to do with possible atmospheric conditions in the vault. Most vaults have ventilation systems that run either on thermostats or whenever the pumps are running, but a better practice is to run the ventilation system continuously. (I know many of us have entered a vault and found a trashcan or garbage bag full of the gunk maintenance personnel have removed from strainer baskets. This debris is often made up of leaves and other organic material that can decompose and reduce the oxygen content of a vault while creating gas by-products.)

Another common issue is the presence of chemicals in a vault. Chlorine and bromine are still the most popular water-sanitizing materials, and many methods and devices to deliver them are commonly in use. Trouble starts when maintenance personnel store these chemicals in the vault.

To be sure, manufacturers of pre-fabricated vaults almost always advise against this practice, and some have even gone to the point of not offering certain delivery technologies as parts of their vault packages. That’s fine, but maintenance personnel are notorious for doing what is convenient rather than what is correct.

At this point, yet another code authority enters the picture: the National Fire Protection Code (NFPC), which regulates the storage of hazardous materials including chlorine and bromine. And another: the Occupational Safety & Health Administration (OSHA), which addresses the handling of these materials in section 1910.176.

The product that is stored for use in the chlorinator is not so much of a problem as is material left in a feed unit over the winter or during long down periods (such as those associated with fountains in time of drought). If these systems are not properly maintained, they often fall into disrepair and can create hazardous conditions inside vaults. Chlorine gas is heavier than air, so if the ventilation system does a poor job or is poorly designed, the potential exists to have air issues.

For all these reasons practical and potential, fountain experts are always looking for other ways to sanitize the water in their watershapes. Chlorine and bromine simply offer too many challenges to successful long-term operation. (For a further twist on this issue, see the sidebar on interactive waterfeatures just above.)

Finally, we come back to electrical issues and the NEC – the one code authority that has long been on record when it comes to fountains.

In section 680-51, NEC addresses acceptable voltages for underwater fountain equipment and provides for the use of ground-fault circuit interrupters (GFCIs). While this isn’t the only part of the code that applies to watershapes, it’s the only explicit mention of fountains. The rest of the code is generic for all submersible applications and covers everything from the correct wire or cable to use in submersible applications to how big a junction box has to be.

Taken all together, it is readily apparent that there’s a lack of definition for fountain designers and installers when it comes to codes, regulations and standards. Yes, there is some guidance when it comes to interactive waterfeatures, but for the most part we’re left to interpret many and sometimes conflicting codes in advancing our projects to completion.

I do not presume to call myself an expert on all of the codes that apply to watershapes, and my experiences in these areas as manufacturer, contractor and consultant have not always been pleasant. I am by no means an advocate of government regulation, but I must say it would be a relief not to have to negotiate each project with each municipality as an individual case – and then live with some bureaucrat’s interpretation of a tangle of codes to get the job done.

If you’ve found another way through the minefield, I am certainly open to suggestions – as is my Australian friend.

Dominic Shaw is a principal and director of waterfeature design for EDAW, Inc., a 900-person landscape architecture, planning and environmental resource firm with 23 offices worldwide. Shaw, who works out of the firm’s office in Fort Collins, Colo., joined the firm in 1997 to lead its waterfeature design studio. This group works on EDAW projects and also serves the greater architect/developer community as a consultant for waterfeatures, swimming pools, ponds and constructed wetlands. In the 23 years before he joined EDAW, he worked variously as a product manager for a fountain manufacturer, owned and operated a fountain installation/maintenance company and worked as an independent fountain consultant.