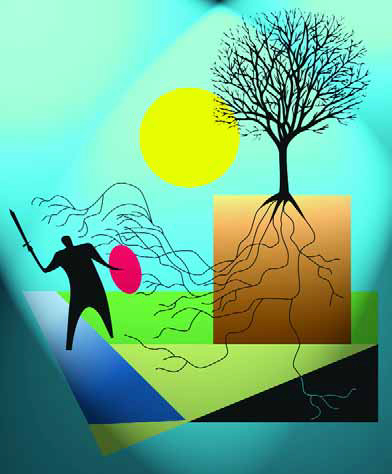 The project is complete. You’ve put the last touches on the landscaping, the swimming pool and spa are up and running, the pond and its water lilies are ready to be joined by some colorful fish, and the expanse of stone decking has been tailor-made for your clients’ entertaining pleasure.

You’ve managed to achieve exactly the look they originally imagined, and now they can sit back and enjoy it – or can they?

The answer will be a resounding “yes” only if you took the time to consider the longer-term effects their beautiful new plants might have on the watershapes and decks. Partly, the concern over longer-term effects is about what certain types of plants can do as far as dropping leaves and what that can mean with respect to maintenance. Partly, too, it is about future growth, how much space you allowed for these botanical beauties and the effects their mature size may have on the ability of the sun to warm the space below.

But the real issue here is roots: Have you really investigated the potential underground destruction the plantings you’ve selected might wreak upon this new and expensive environment?

It seems weird, but there are actually some trees whose roots seek out hard structures and purposely push against them.

By now, for example, most people in the watershaping trades have learned that Ficus trees will destroy any type of hardscape in their path (although some varieties are not quite as destructive as others). It doesn’t matter whether the hardscape is wood, masonry or concrete, the root structures of these thirsty plants are about as aggressive as they come.

Ficus trees are unusually rough on hardscape, but they share three basic features with all other trees when it comes to root structure:

[ ] Root hairs. These develop on the ends of the roots and are called hairs because that’s about how big they are. These are a main source of a tree’s nutrient intake, particularly in shallow soil areas. They are particularly well suited to wriggling their way into pipes of all sorts.

[ ] Storage roots. These store reserve food for times when the plants can’t pull nutrients from the soil, as during the winter months.

[ ] Root anchors. These are the roots that keep the plant from falling over. They are larger than the other two root types and are the ones that have the potential to cause the greatest long-term damage.

Root systems are further classified by the general effect they have on areas around them. Some, for instance, have destructive roots that seek out and destroy anything in their paths. These roots, typically root anchors, are strong enough to dislodge concrete and even perhaps steel structures over time. They have absolutely no regard for what you ultimately want to achieve.

There are also root systems that behave as water seekers. These roots seek out water sources, attempting (and often succeeding) to infiltrate the source. Some will reach for underground pipes and will actually send small roots inside the pipes; over time, these roots grow larger and completely block or break the pipe. These are usually root hairs and storage roots, but if the situation goes far enough, root anchors may also get involved.

Most of us have experienced these root issues in everyday life as backed up drains in our homes. Don’t you wish someone had told you about this potential before that big tree was planted on your front lawn? Don’t you think as well that this is something that deserves some consideration as you install plants around large, ready sources of water?

There are a couple of routes you can take to prevent any of these watershape-threatening scenarios from happening in your clients’ yards. A little planning up front can go a long way toward keeping your reputation intact.

[ ] Plant smart. Many plants will not cause any damage to a watershape; unfortunately, the ones that will cause damage tend to ride high on the list of people’s favorite trees. But that still leaves a wide variety of palms, for instance, which are usually considered good choices for planting next to watershapes both because of limited leaf drop and compact root structures.

As a rule of thumb, I’d suggest consulting your regional plant guide and selecting trees and shrubs classified as coexisting easily with other plants. But ask questions and investigate thoroughly: A guide may not come out and say a plant has invasive roots, but that doesn’t necessarily mean it’s safe to place one next to your watershapes.

[ ] Think location, location, location. Placing plants known to have invasive roots at a safe distance from any hardscape will help curb the problem. If you’re not sure what kind of space a tree might need, consult a plant guide to determine the mature width of the plant.

The rule of thumb is that a tree’s roots reach as far as its canopy. Thus, if the plant guide says the tree will have a spread of 20 feet, you should place the trunk of the tree at least 10 feet – that is, half the span of the mature tree – away from any hardscape or watershape.

[ ] Use root barriers. There are many different types of these barriers, ranging from PVC to concrete. The most common are PVC and reach from two to four feet into the ground. When placed between the tree and any hardscape, they can often stop and deflect (or at least slow down) the horizontal spread of the roots.

Over time, however, no PVC barrier can be guaranteed to hold back larger roots. For plants that are more invasive, consider investing in poured-in-place concrete barriers that can reach any depth you need. The tree may eventually break up even this massive a barrier, but it will likely be less expensive to replace a concrete barrier than it is to replace a watershape!