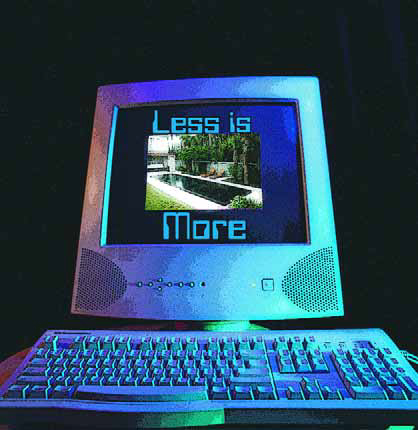 We’ve all heard the phrase “less is more” so often that it’s become a cliché, but there are still situations where there is powerful truth in those words.

There is no question, for example, that watershapers can create tremendous beauty by using simple shapes and quality materials to accentuate and magnify a setting. This is particularly so when the watershaper exploits the alluring, reflective qualities of water itself to create a strong focal point while effectively blending the vessel into its setting.

A case in point is the swimming pool discussed in this column – a simple rectangle set on waterfront property near Jacksonville, Fla., and distinguished by the use of black absolute granite on a raised bond beam and, for the interior finish, an elegant black ceramic tile. It’s a perimeter-overflow system that creates a monolithic appearance while functioning as both a pool and a graceful waterfeature.

This project emerged from a series of conversations I had with the client and the architect, Richard Skinner & Associates of Jacksonville. (I’ve worked with them on several projects.) There were originally two pools in the plan, one in the yard on the inland side of the oceanfront property, the other in a driveway/entry space between the guesthouse and the main house. The desire with the latter watershape was to have a vessel that would act as a subtle entry feature while serving as a pool protected from the wind.

The original concept for the sheltered pool had a rectilinear shape, but there was to be an elevated patio on the side against the property line with an upper-level feature that would well up and cascade into the main pool.

I was originally brought in as a consultant on the oceanfront pool to design it and, most important, help figure out a way to create a spa that would be entirely contained within the rectangular shape of the pool and still be completely invisible. We discussed several possibilities, including moveable walls and a unique system that would include a special water leveler that would be activated whenever the spa was to be used. This would serve to drop the main-pool level and make the spa break through the surface.

As is often the case with high-end design projects of this nature, that entire design was abandoned in favor of a much simpler pool/spa design and our focus turned to the dual-function watershape located between the two structures on the entry side of the house. 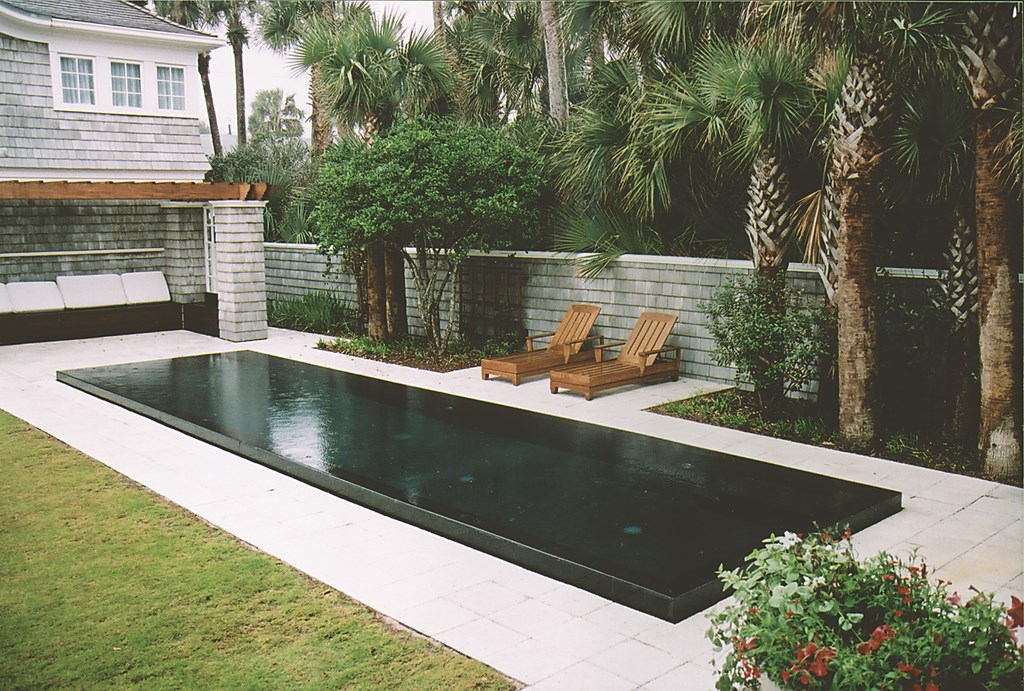 It was in an extremely high-visibility location from so many of the property’s key lines of sight that we knew it had to have visual weight while also existing harmoniously within the space. Early on, the client and architect had decided they wanted a clean, rectilinear design that provided strong reflective qualities, but their thinking didn’t go much farther than that.

As discussions progressed, we started talking more and more about using a perimeter-overflow design. This had the immediate consequence of knocking the two-level approach and the cascading water effect out of the picture because of concerns about surface ripples and their effect on a mirror-like surface. We soon moved from that relatively involved concept to the fairly simple idea pictured here.

Before long, we had a design with an elevated black edge flowing over on all sides, making the surface as reflective as possible. I was particularly pleased with the choice of the black surface materials, because they would naturally intensify the reflective qualities of the water while enabling the watershape to fit in neatly with the traditional architecture of the house and guesthouse as well as the surrounding greenery.

With the dark interior finish and the raised beam, you can only sense the depth of the pool when you’re standing right next to it. Otherwise, even from a few feet back, all you see is a rich, glazed look – an ultra-clean appearance accentuated by a back-angled beam detail that sets a razor-sharp edge.

We were fortunate in this particular oceanfront application in that the structures and walls truly protect the vessel from the wind – an obvious key to maintaining the reflective quality with a perimeter-overflow effect. We were concerned enough up front that we had talked about installing an anemometer to measure the wind and turn off the system when breezes kicked up, but it became apparent early on that the sheltered location of the pool eliminated the problem.

For all of the visual simplicity of the rectangular form, however, executing a perimeter-overflow system is never a small task.

First, there’s sizing the surge tank. To do so, we determined what would be a reasonable and safe capacity to allow for storage of the water in transit when the system is turned off. That water in transit is considerable: For one thing, when the overflow system is in operation, the entire surface area of the pool is raised, thereby lifting the water over the edge. For another, there is water flowing through the gutter and piping that needs to have somewhere to go after the system shuts down. 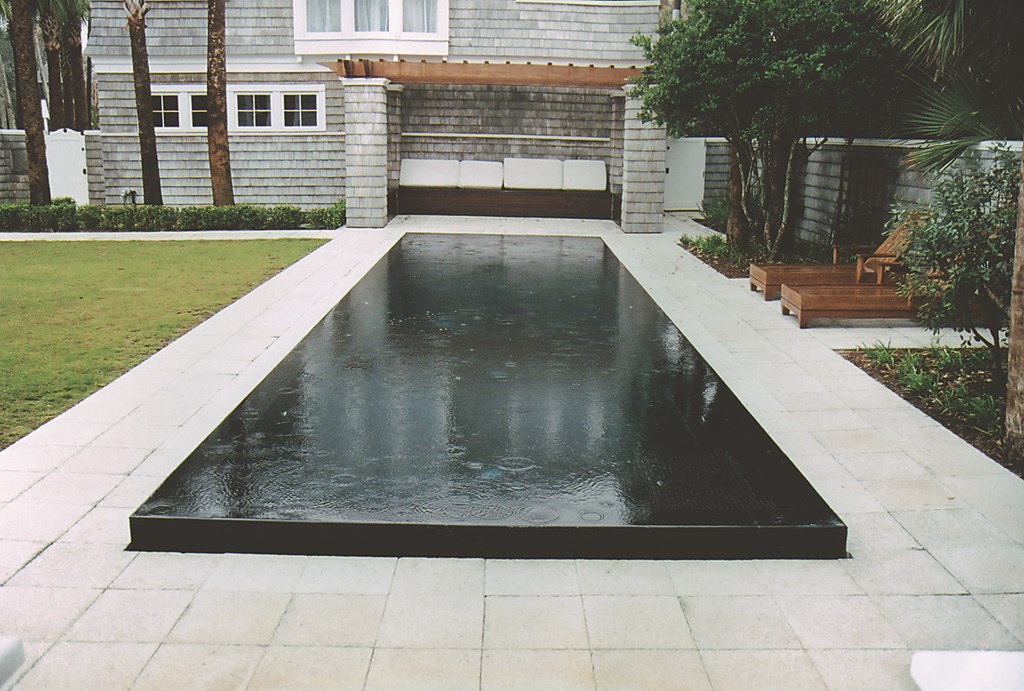 We also had to consider bather displacement and surge. This varies greatly depending upon the anticipated number and activity level of potential bathers, so we applied this rule of thumb to determine the minimum surge capacity: You start by calculating the volume of water contained in two inches of the entire pool surface. Next, to determine the total surge-tank volume, you factor in the dimensions of possible tanks and calculate a typical minimum operating level of 12 inches.

This amount is then added to the previously determined minimum surge capacity and the tank size is set. It is safe to say that I have never seen a surge tank that was too big!

These tanks have access-ways large enough for a service technician to pass through and clean out the collected debris. This can lead to aesthetic problems, but in this case we minimized the visual effect by getting a tank with a collar and elevated lid. The bulk of the tank is hidden well below grade, reinforced and covered with a layer of soil and sod. All that is exposed is the square lid.

The cast-stone deck pitches slightly back toward the one-inch slot for a distance of three feet from the pool to allow splash to flow back into the below-grade gutter. That gutter is six by six inches and is made of waterproofed, poured-in-place concrete with four-inch-diameter vertical drops spaced every eight feet around the perimeter. These feed a six-inch trunk line that slopes by a quarter inch per foot toward the surge tank.

(We’ve since changed our basic specifications to use drops on five-foot centers with horizontally mounted “pick-up” lines. This offers venting that minimizes vortexing and associated noise issues that sometimes arise – but that wasn’t a problem with the project at hand.)

The deck material is cantilevered over the gutter using marine-grade, 3/16-inch, stainless steel plates bolted to the top of the outside of the gutter. This allowed us to set up a continuous and uninterrupted slot that can easily be cleaned with a high-pressure hose in the event a storm dumps dirt and debris into the gutter.

The main vessel has its own circulation system and filter. For the edge detail, there’s a separate system that draws water from the surge tank by a three-horsepower pump and feeds it through two 450-square-foot cartridge filters. The idea that a perimeter overflow or vanishing edge system would operate unfiltered or share a circulation system with the main vessel makes no sense to me. (For more on this approach, see the sidebar above.)

All of the water returns to the main vessel after passing through a very important plumbing loop (equipped with a check valve and vacuum-relief breaker) above the pool’s maximum water level. It flows via four black in-floor return fittings that eliminate turbulence, even in shallow-water applications. There are dual drains for the primary filtration system; this water is heated and sanitized before being returned via wall-mounted inlets off of a looped return line. The water is sanitized using a salt-conversion, chlorine-generator system.

In wet/dry applications such as this – especially when using porous, natural materials such as black absolute granite or travertine or even exposed aggregate – you have a situation in which, over time, the process of efflorescence will draw mineral salts from the material and leave unsightly deposits on the surface.

In this case, such a problem arose and was eliminated by cleaning the salts off and then applying a water-based sealer on the granite. The material will need periodic resealing through the years, but that’s nothing compared to the steady maintenance hassle of keeping up with efflorescence.

We also saved ourselves trouble inside the pool by setting it up a squared floor/wall design to go along with the square ceramic tiles we used for the interior finish. This radically reduced the need to cut tile and enabled us to create clean grout lines that don’t interrupt the aesthetics of the finish.

We also went with a step detail that extends down the side of the pool, much like the configuration used by Frank Lloyd Wright in the swimming pool at Fallingwater – a detail much admired and often used by my friend and Genesis 3 partner David Tisherman. There’s also a bench that extends partway down the pool on one side.

The result is a swimming pool that effortlessly achieves its dual objectives – a simple, striking waterfeature that doubles as a fully functional swimming pool while fitting comfortably within the setting. In my book, it stands a good example of how less really can be more in the watershaping realm.