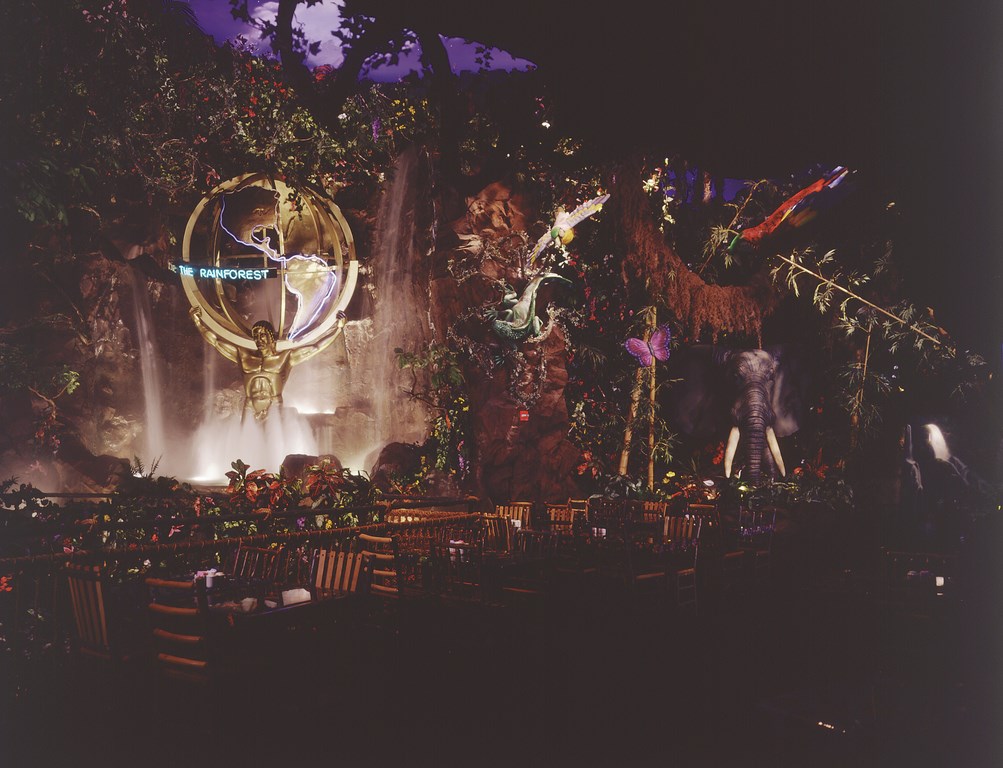 An important part of creating beautiful commercial watershapes is designing systems that actually work, effectively and enduringly, within the requirements and constraints of their given settings.

This has become a real issue in the fountain business, where new demand is popping up at locations as diverse as resorts, malls, hotels, art pavilions, office buildings, convention centers, museums and even restaurants – and a few too many good-looking designs have been pulled out, significantly downsized or turned into planters because they just haven’t performed as needed or promised.

This is a problem of expectations that needs solving: Architectural designers are increasingly appreciating the role fountains play in adding drama to entryways, thoroughfares, courtyards and plazas, but with this growth in the use of water has come a growing awareness that good looks just aren’t enough.

So before assuming that a fountain is designed to perform as specified with minimal maintenance over the long term, it makes sense to do what we at our firm call “creative design streamlining.” To illustrate what this means, let’s look at the history of a well-known chain of restaurants that has sought to use watershapes to create stunning and truly unique environments.

HEARTS OF THE JUNGLE

Rainforest Café is a chain of family restaurants that offers vivid feasts of color, sound, fog and lighting to create the illusion of dining in a tropical rainforest. They’ve set up shop in several cities across the nation, and if you’ve ever been in one you know that they’re physically impressive – and that the food’s good, too.

As originally conceived, all of the special effects used to express the restaurants’ theme must be synchronized, functioning together in intricate harmony to create the desired naturalistic effects. Therein lies a tale.

By the spring of 1997, Rainforest Café was experiencing significant growth, and its owners developed plans to open a number of new restaurants in various spots throughout the country. They knew, however, that the watershape designs they were using, although attractive and functional, were difficult to install and a devil to maintain.

The owners were savvy enough to recognize these problems as limiting factors in their growth plans – a real bottleneck they had to break. This led Carlos Parrague, vice president of construction for the company, to call in our firm to participate in their next installation to figure out ways to reduce the complexity, time and cost of these watershape installations.

Our company, Commercial Aquatic Engineering of Shakopee, Minn., specializes in fountain design and construction. We jumped into the project with both feet and immediately set our sights on determining if the watershapes could be “creatively streamlined” to increase quality, improve performance and speed installation.

The metamorphosis in the design of the Rainforest Café system that took place in the next 12 months gave us the opportunity to look at several creative solutions that would ultimately put expansion of the restaurant chain back on schedule. These solutions included the use of mechanical, electrical and material technologies to create a more reliable design that was much faster to install at a far lower cost.

When we began looking at the systems at one of the existing stores, the first thing we noticed was that its various watershapes (three in this case and more in others) were all commonly linked to the same reservoir. The way they were plumbed and the way the pumps were configured created a situation where failure of one system meant the failure of all. Another limitation of this design was that the flow rate to an individual feature could not be individually controlled.

This approach created all sorts of problems with the restaurants’ main watershapes, which included a wet entryway sign, a rain curtain and the central “Atlas Man” fountain, among others. The potential for operational problems was considerable.

We identified one concern immediately: It is customary for the company to use local, commercial plumbers to install fountain features in new store locations. Typically, these crews were unfamiliar with commercial watershape design, and their traditional use of pipe bends, long piping runs and frequent joints had the potential to work against good hydraulic performance. 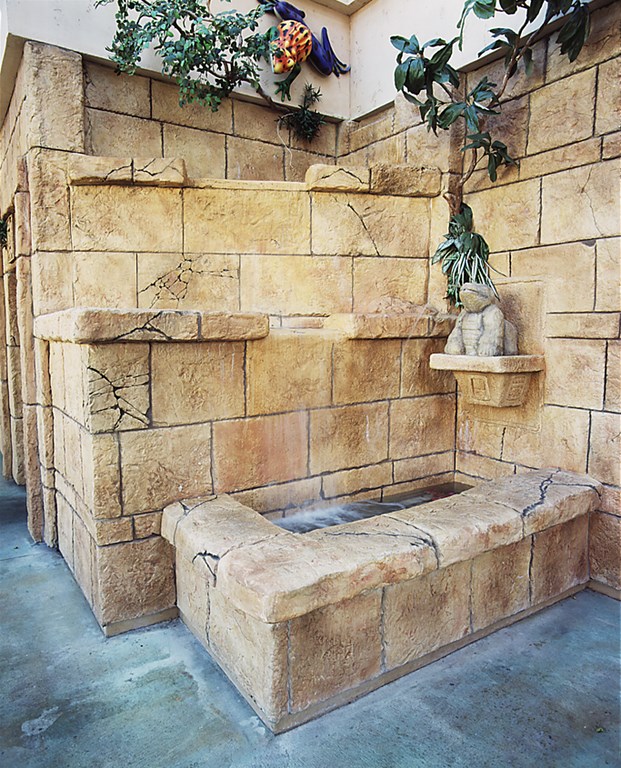 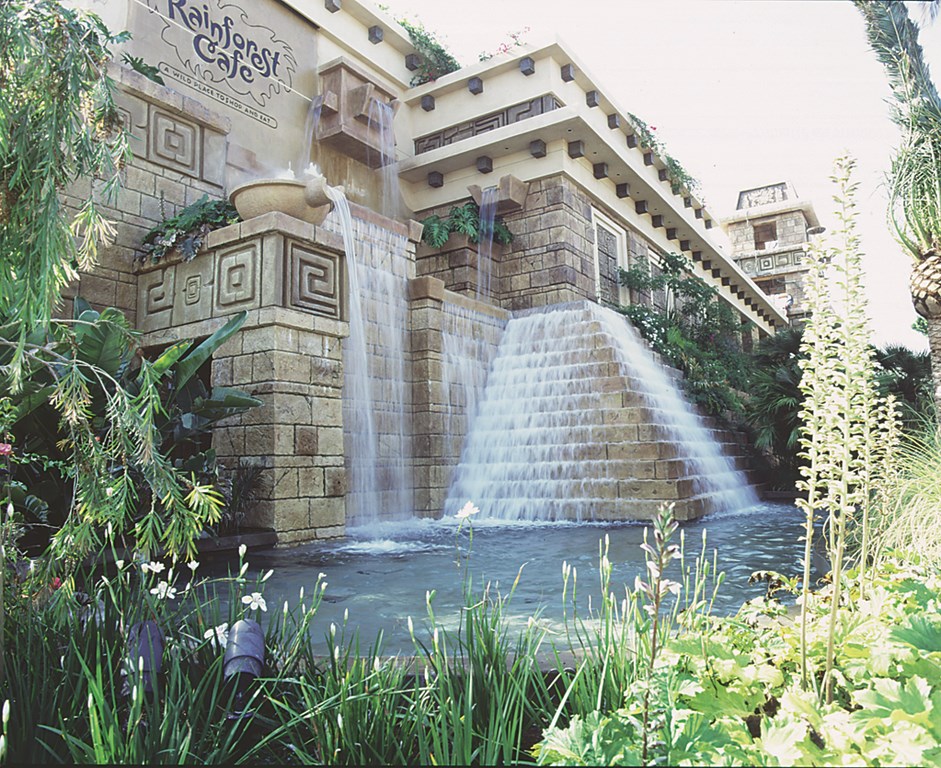 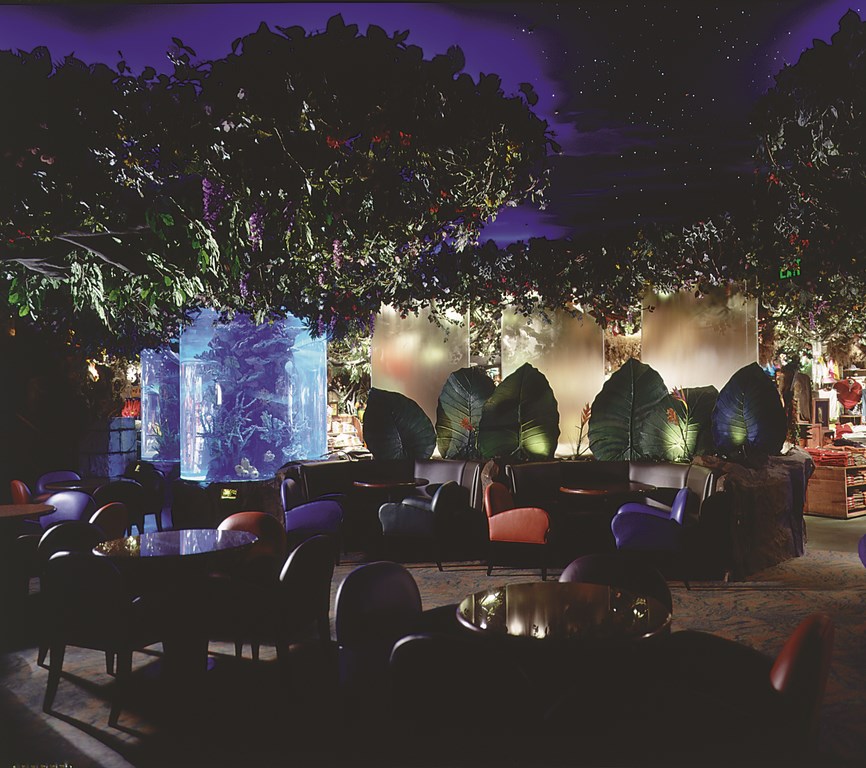 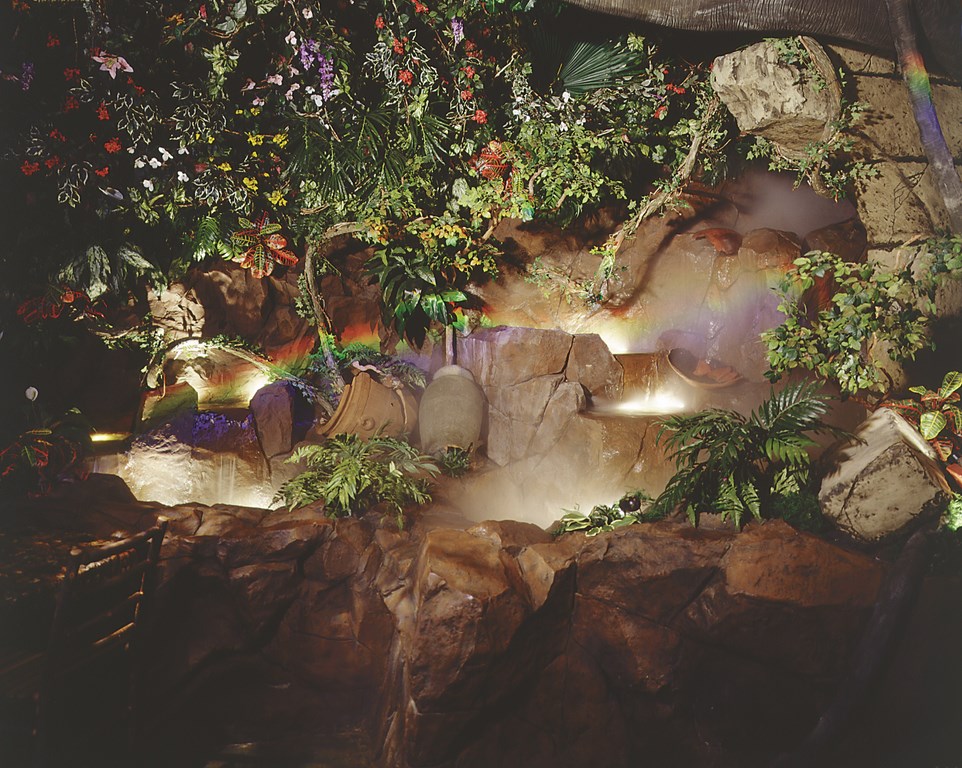 The complexity of these installations also contributed to confusion and considerable delays in construction. We recognized that with so many new restaurants being built at once, the situation called for a pre-fabricated pumping system that incorporated both filtration and sanitation for each fountain – all installed on semi-portable equipment skids. The skids could then be located in an equipment room, in one location, where pre-designated plumbing runs and electrical service would be set up per plan.

This approach took care of lots of problems: It streamlined installation, enhanced overall performance and improved water quality in each waterfeature – a critical consideration in a restaurant environment. Each new skid was equipped with an automated chemical treatment and filtration system; coupled with greater hydraulic efficiency, this indeed led to vast improvements in water quality.

In a more immediate sense, however, the streamlined installation of the fountains was the key to getting the expansion plan back on track. The equipment skids were to be assembled off-site, tested and shipped in one finished piece to each restaurant for installation with greatly simplified plumbing runs, simplified electrical hook-ups and a greatly reduced need for on-site supervision. Not only would the results be more reliable, but also the amount of labor would be cut in half. Further, the equipment rooms were reduced in size due to the efficient, compact design of the new equipment skids.

This revised watershaping approach was presented to Rainforest Café’s management team staff for consideration: They quickly approved and asked us to make the design changes in time for their next installation.

On the next project that came up, we were on site to review designs and look for additional value-engineering opportunities.

We began by focusing most of our attention on the “Atlas Man” fountain, the signature watershape at the center of all Rainforest Cafés, which consists of a large central sculpture that stands on a pedestal in the center of a circular basin. An aerated hedge of water surrounds the sculpture, while water cascades down geological rock formations to create water effects that draw all eyes to the sculpture.

At first, these fountains’ basins had been installed using poured-in-place concrete that carried all the necessary plumbing. This made for an installation process that required considerable scheduling and complexity. 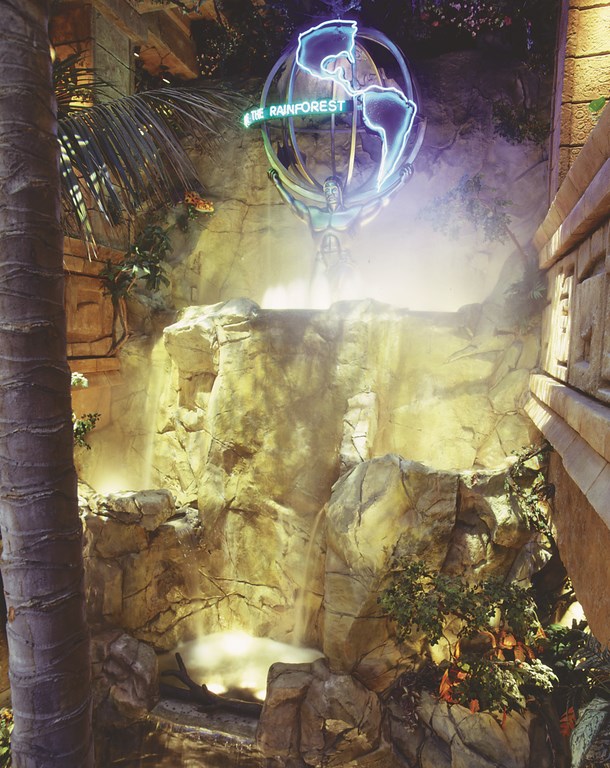 Particularly challenging was the bubbler-jet system: This feature required in-floor installation, which was expensive, tricky, and subject to high maintenance. And because Rainforest Cafés are often constructed in existing facilities, these tenant improvements often required that crews had to cut up existing floors and re-pour concrete to create chases for the fountain plumbing.

Just about everywhere we looked, there were opportunities to find ways for the owners to save both money and time.

The key in all of this was off-site fabrication. After an intensive, three-month research and redesign effort, we decided to use a synthetic composite material to create the basins and pedestals. This material has the structural strength required, but at a much lighter weight. Better still, the bubbler system and the other plumbing could be pre-installed in the lightweight structure and tested before we shipped anything to the job site.

The result of this change saved between two and three weeks in time and labor costs that had been associated with installing the in-floor bubbler system and waterproofing the “Atlas Man” feature. This alone was a big process improvement.

The management of Rainforest Café were excited by these changes and asked if we could re-design each of the waterfeatures to make them completely pre-fabricated with pumping and filtration systems that were self-contained in the feature. It was time to go back to the drawing board.

At this point, we initiated a development project to redesign each watershape using the same turnkey approach that we had successfully applied with the “Atlas Man” fountain.

There was a trick to this: Because of differences in facility size and configuration, we knew we wouldn’t be able to come up with standard, one-size-fits-all solutions. Instead, we had to be able to customize each feature to fit each particular restaurant. With that in mind, we set about generating all of the necessary conceptual sketches, engineering drawings, functional prototypes and, finally, “the products.”

Within four months, the first systems were being installed in Rainforest Café’s new Macarthur Center location in Norfolk, Va. The general contractor initially expressed concern about working with new elements and the potential effect it might have on the project, but he was pleasantly surprised at how fast and easy things actually went: The new self-contained, pre-fabricated fountains arrived on site and were installed in less than ten days as opposed to the two months that had previously been required for watershape construction.

Gone was the concern about waterproofing, for example, and structural-support considerations also were minimized by virtue of the systems’ self-contained, self-supporting basins. The other benefit gained from this design approach was a single-source responsibility for design integrity that had been virtually impossible to track with on-site construction. 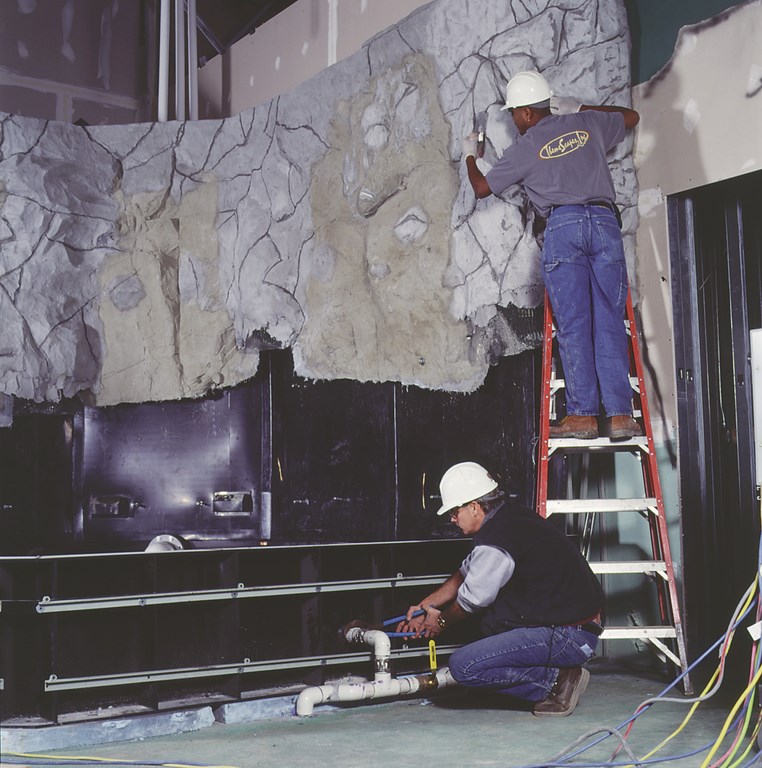 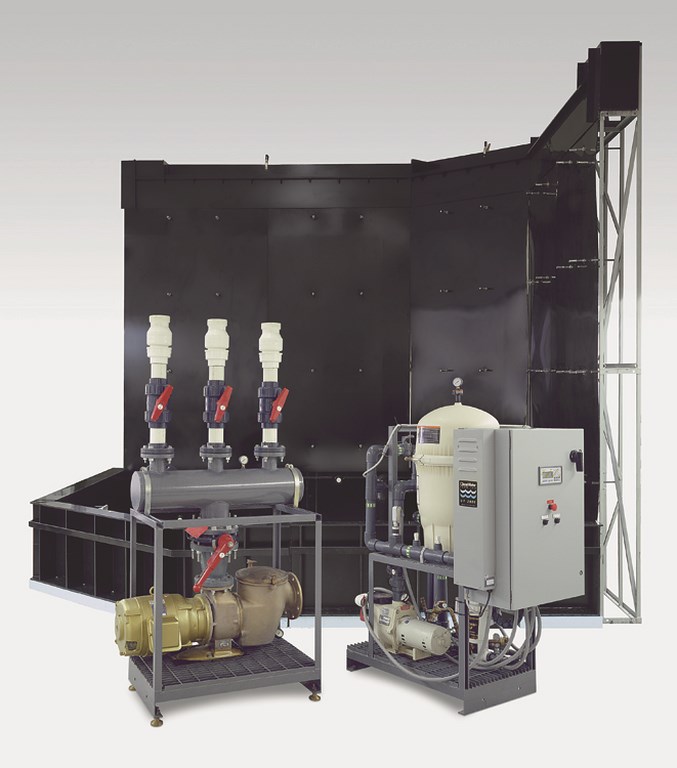 We’re proud of the creative design streamlining we did for Rainforest Café – and of the time and money our work has saved the company with every installation they’ve done since we first were called in. The project life cycle for a new store was compressed to just 90 days: A target that once seemed impossibly out of reach was now handily achieved on each new job.

We now have about a dozen new Rainforest Cafés under our belts, each incorporating the newly designed watershapes, and every one has come off without a hitch including a couple of special projects at the chain’s so-called “icon stores” in San Francisco and at the new Disney theme park in Anaheim, Calif.

The San Francisco restaurant – currently the largest in the chain – includes a three-story, self-contained, pre-fabricated Atlas man/waterfall feature that arrived on four semi trailers. In all, five fountains were installed in the San Francisco store, three of them custom-designed for this location. With two of our people on site with a field supervisor, the installation was completed in fewer than 30 days. For its part, the Disney location includes six waterfeatures (three of them custom), and again, installation was a matter of days rather than months.

What all this goes to show is the value of creative design streamlining in reducing system inefficiencies and maintenance costs while improving overall system quality. It also defines an opportunity that savvy people in the fountain business have to make things easier on architects and their clients – and spread a positive story about great-looking fountains far and wide!

Greg Stoks is one of the principals of Commercial Aquatic Engineering, a Shakopee, Minn.-based consulting-engineering company that works with architects and owners to design and manufacture fountains tailor-made for the environments in which they operate. Stoks began working in the aquatic design and engineering business 18 years ago under the guidance of his father, Dick Stoks, a designer/entrepreneur. During his tenure with Commercial Aquatic Engineering, he has focused on fountain design and consulting.