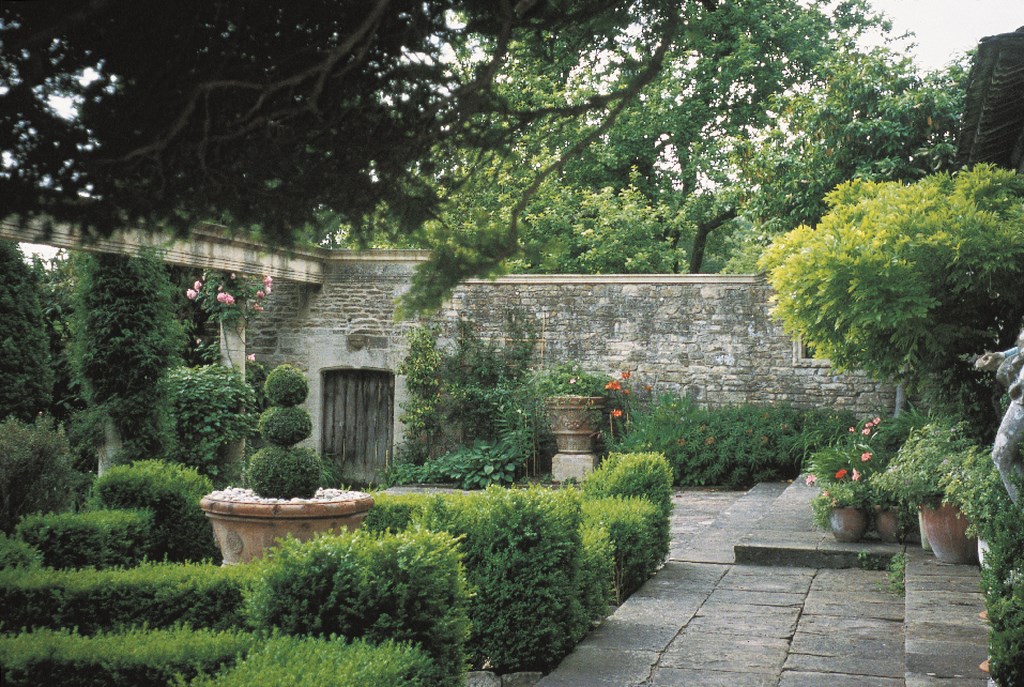 The ancient Celts transported huge slabs of stone over long distances to create religious circles at Stonehenge and Avebury. The Romans used stone to build their aqueducts. From the pyramids of Egypt to the Acropolis in Athens, from the Great Wall of China to the great castles of Europe, stone has been the raw material of choice for our greatest and most enduring structures.

Through the ages, stone has been a well-used material because it is both durable and readily available. It’s hard to find a town in Europe without walls constructed of local stone, and all you need do is drive through New England to see stone walls everywhere, basically because farmers had to do something with all the stone that they dug out of their fields.

Stone can also be used in the artful imitation of nature. It has been used in Chinese and Japanese gardens for centuries, for example, to replicate the mountainous terrain of these countries. These gardens and their borrowed views also integrate stone into the landscape as paths and altars and as ornaments such as stone lanterns.

Watershapers and landscape designers alike will find a treasure trove of ideas and design touches in even a quick survey of what has been done with stone through the years. We can transmute those approaches, placing stone in our landscapes, in our garden structures and in our watershapes. To that end, let’s take a tour and drop in on some of the possibilities.

In landscaping, gardening and watershaping, stone is very often used to help create the illusion that the viewer is looking at the work of nature. And from the beginning, designers and installers have understood that stone in a natural setting must be believable.

Too often, however, boulders look as though a giant dropped them into the landscape with no regard for a sense of unity or design (Figure 1). That’s the wrong approach: Multiple boulders should instead be thoughtfully placed, with at least the bottom third buried in the soil. 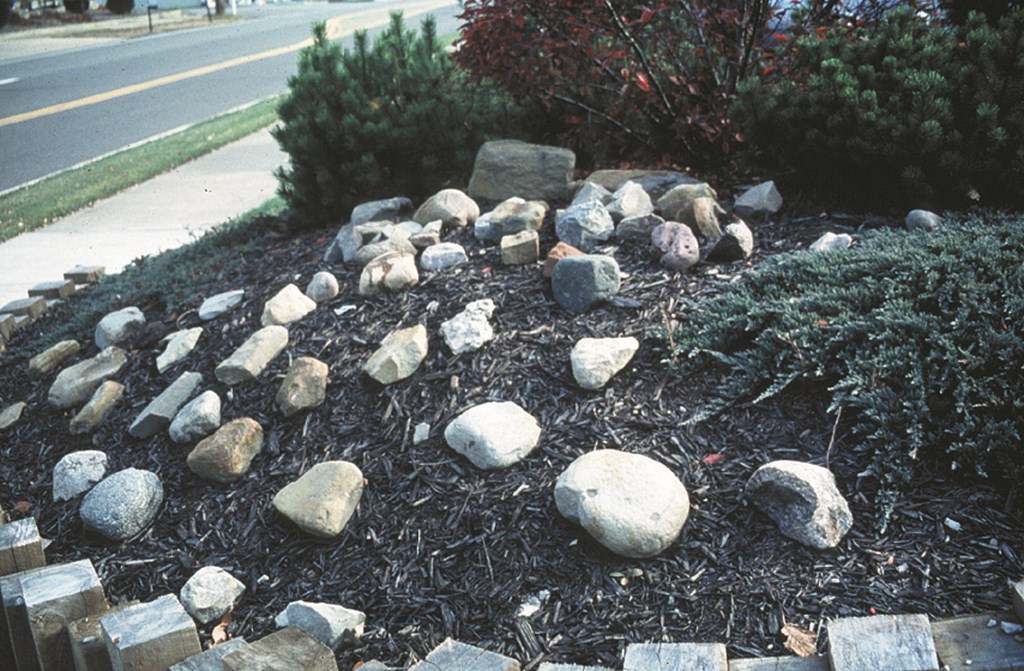 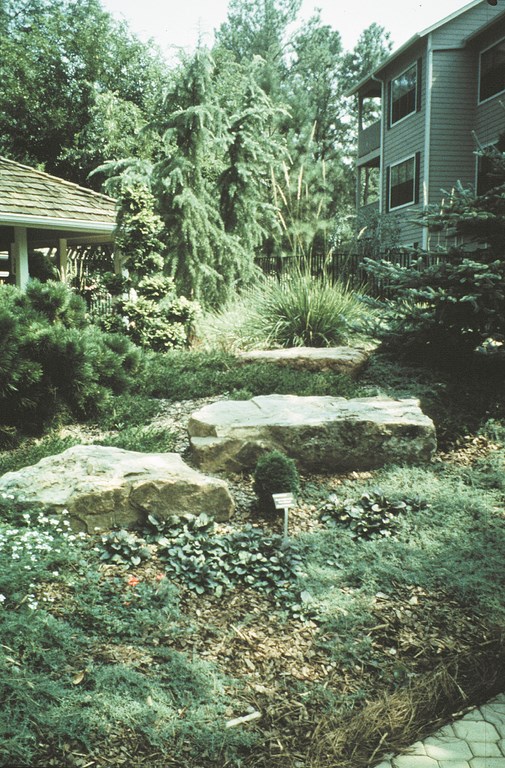 This isn’t rocket science, but it does require thought and planning, especially when large stones are involved. Think of the material: Stone conveys a sense of power because of its size and a feeling of permanence and also because many cultures believe that spirits abide in it. This combination of attributes is probably why stone has frequently been used to create prayer niches or altars by the roadside or in the woods.

At the same time, stone conveys a sense of age, particularly when it is somewhat eroded and covered with lichens or moss (Figure 3). Such stones are almost always found in Oriental gardens, but you don’t need to go to China or Japan to see them. In fact, I believe that such stones can be found almost anywhere in the world. 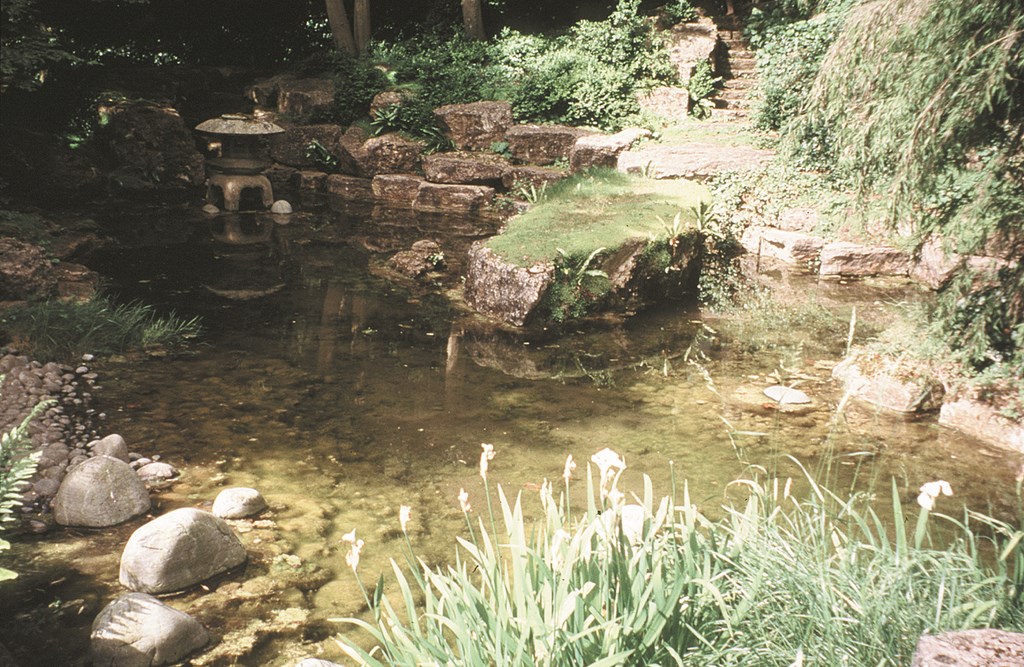 Near where I live in Ohio, for instance, there’s a section of the Cuyahoga Valley National Park called The Ledges. The Ledges are huge, glacially striated and pockmarked rock outcrops that are covered with lichen (Figure 4). Few watershapers would ever try to duplicate the grandeur of The Ledges, but it should be possible to create, on a smaller scale, similar effects through a study of the shapes, striations and manner in which plant material (particularly ferns) are growing here. Such an outcrop could, under the right circumstances, be the basis for a spectacular waterfall.

And of course, stone doesn’t have to be in a near-natural state to play its role in a landscape or watershape. Old European gardens usually contain carved stone. Some stones are statues or monuments; others serve as pedestals for statuary or urns. Through the 17th and 18th centuries, English garden designers commonly copied architectural elements of earlier Italian Renaissance gardens, appropriating their stone arches, staircases and balustrades as well as their stone piers and columns used as ornaments or as supports for pergolas.

THE EFFECTS OF AGE

When you look at these traditional applications of stone – regardless of the period or culture – the richness, subtlety and beauty of stone that has been in place for a long time is instantly apparent. No matter where it’s found or how it is used, stone ages gracefully, and its presence lends an immediate sense of antiquity and tradition to any setting.

If you look carefully (and even not so carefully) at pieces of old stone next to pieces of new stone, you will notice that no piece of old stone is exactly like another and that each has blunt edges. New stone tends to have an Industrial Age accuracy to it, with its very even, sawn edges. Therefore, Step One in making new installation take on what I consider to be a desirable air of antiquity might be to blunt all those new edges with a chisel or some other tool of choice.

The other noticeable difference in old stone is color. The steps and pond edging at the Hohenpark Killesberg, a public garden in Stuttgart, Germany, are very dark and look very old (Figure 5), even though the park only opened in 1939. The combination of weathering, dirty shoe soles and pollution all contribute to that darkening. New stone is much brighter. This is an instance where dirt is truly useful, so in Step Two of the “aging” process I rub it into new stone to begin the darkening process. 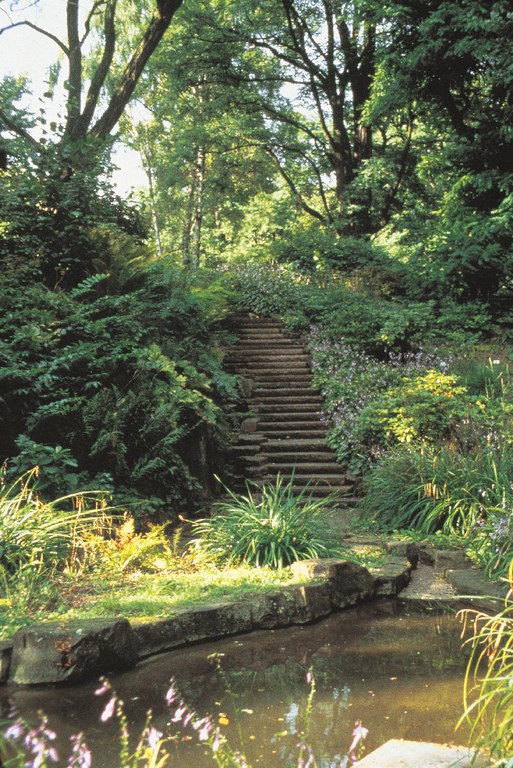 Under favorable conditions, old stone is also a magnet for plant growth. Given the opportunity, plants will root anywhere space is provided by crumbling mortar and a bit of moisture (Figure 6). If you are using new stone to build a wall, Step Three in the aging process calls for leaving gaps to sustain plant growth – and, in shady settings, encouraging the growth of lichen and moss either by transferring existing growth or by administering a buttermilk mixture to the stone. 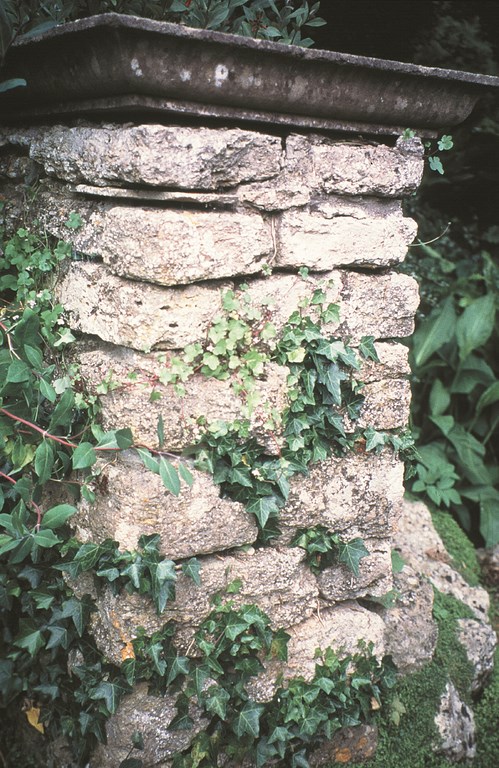 In areas with little rainfall, succulents such as Sempervivum can be planted into the wall (Figure 7).

Over time, rain falling on the foliage will create stains that color the wall. (Naturally, you will have created good drainage behind the wall to ensure its stability and the survival of its plants!)

THE WALLS HAVE IT

Another approach to creating the illusion of age in stone is transferring or closely replicating the patterns of old stone construction.

This, of course, requires both a familiarity with the work of artisans from ages past as well as a keen eye for detail. Just as designers gain ideas from the study of nature, we also can learn from carefully considering the ways of masons and builders of the past. These details are plentiful anywhere old buildings and gardens can be found – and ideas you find in walls are among the easiest to expropriate for use in a fresh setting.

On a recent visit to a small, rural English town, I saw a five-foot stone wall that ran along the main street. This wall had obviously been there for hundreds of years. Just a few weeks later, I saw the same wall, scaled back to a two-foot height, on a street in a Toronto suburb (Figure 8). Later that same afternoon, I saw another wall in a similar style that had been constructed in the early 1900s. It’s quite apparent that the English who settled Toronto in the 1700s brought some construction techniques and styles with them. 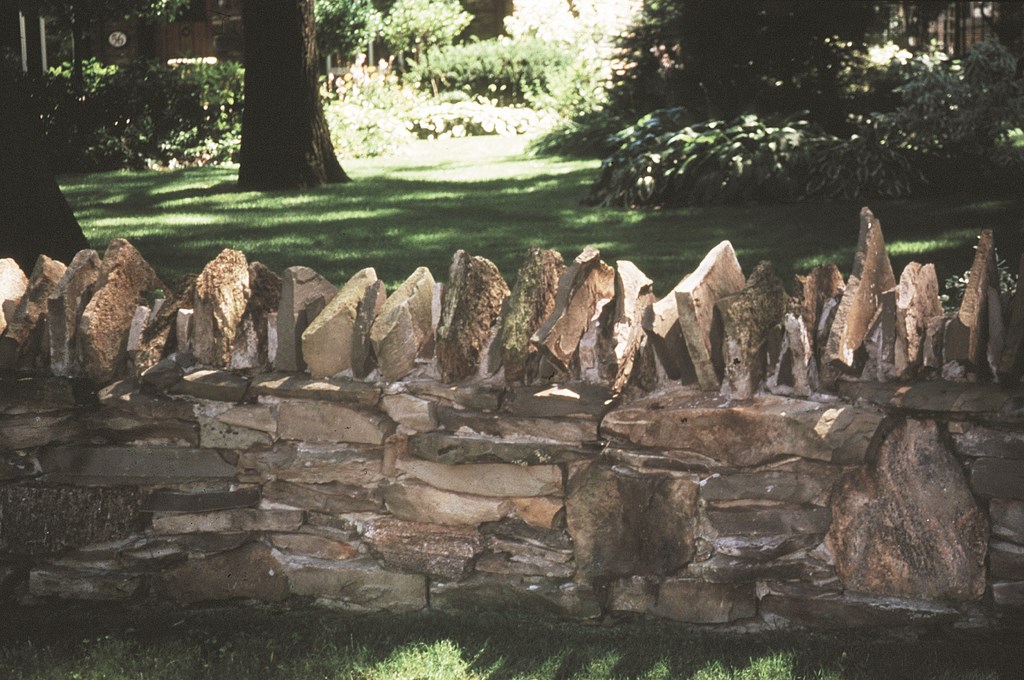 Of course, almost all of these old construction techniques can be adopted or transferred directly to just about any setting by designers and builders willing to study them and breathe new life into them. Take an old wall I spotted in Italy (Figure 9): This could be duplicated anywhere, right down to the detail of the stained, clay-tile cap. Compare that to the newer wall seen in Figure 10: It was constructed using the same technique but with a new-looking cap. If it had been capped with clay tile, it would have been difficult to tell the age of either wall. 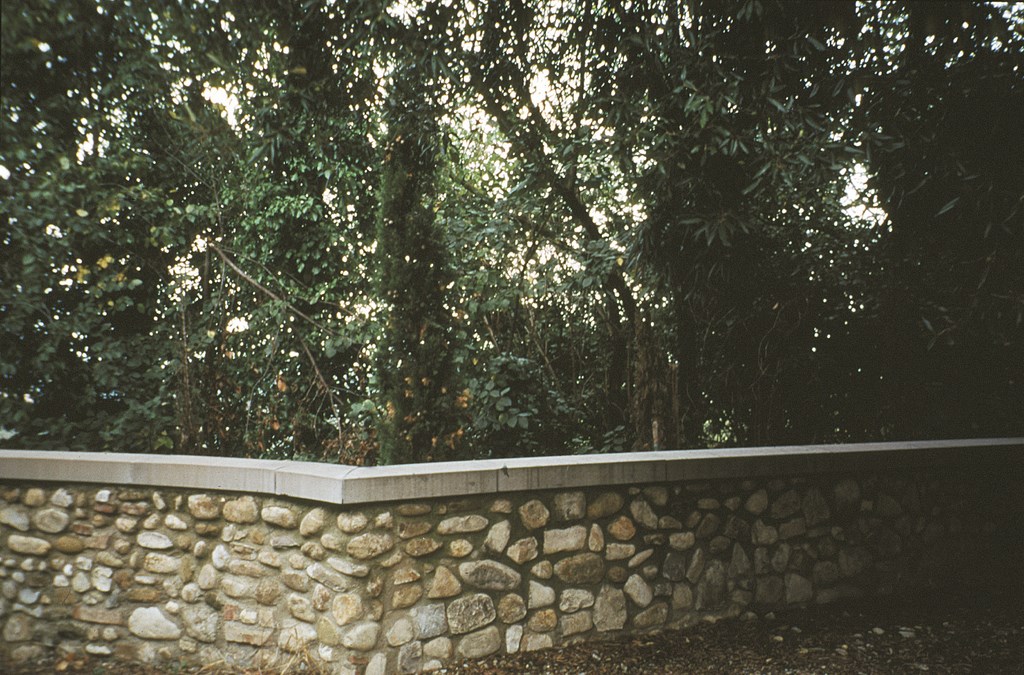 In the wall technique just discussed, stone is definitely meant to be seen. It’s hard to tell if that’s the case for the stone in another wall I spotted nearby (Figure 11). This wall is at least 200 years old and might be even older, given that parts of the adjacent castle date from the 13th Century. Perhaps the stone was originally used as an aggregate for concrete that had been plastered and evened into wall form. Or was the stone meant to be exposed as we now see it? Either way, it’s beautiful now – and reproducible! As can be seen in the Italian walls above with their distinctive caps, a simple wall can become very interesting when the pattern at the top is unusual. With an approach as simple as standing every other stone on end instead of laying it flat, a wall becomes crenellated – and more interesting (Figure 12). Making new stone look old and more interesting is something attainable by every contemporary designer and installer. It offers watershapers, landscape professionals and architects the opportunity to call on the impressions made by stonework found around the world and across the ages – and all it takes to exploit this heritage is seeing with open eyes.

And rest assured that the sampling seen in the photographs accompanying this article barely scratches the surface.

There’s much more to this discussion of the uses of stone in landscapes, structures and watershapes: In the next issue, we’ll pick up this discussion with a few more details from retaining walls and then look at stone details found in walkways, steps and patios.