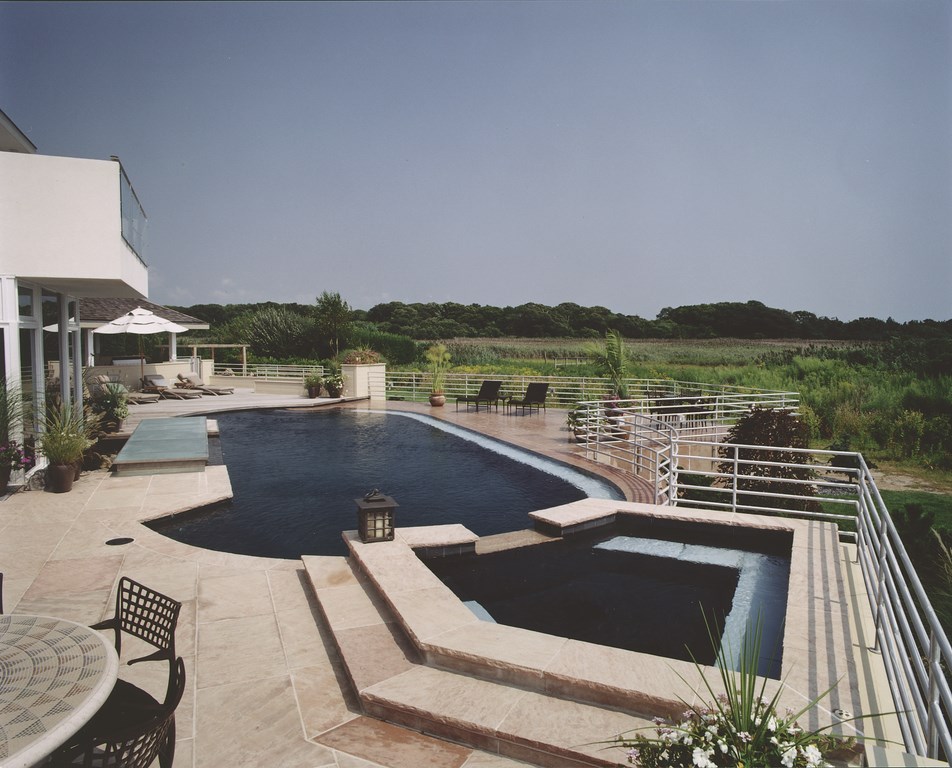 It was one of those projects that demonstrate just how beautiful and exciting swimming pools and spas can be.

The clients started by asking for something unique that would make creative use of lighting, hydraulics and sound – something that would maximize and extend the modern styling of their home while making the most of spectacular views available along the shore at Westhampton Beach, N.Y.

Their confidence in our capabilities and creativity set the tone for the entire project and let us step well beyond the ordinary in our thought processes. This trust was in fact the cornerstone of a great relationship, and the positive rapport between all parties that developed as a result was crucial in bringing everything to completion.

The result is one of the most fascinating amalgamations of design features and details I’ve ever seen. It’s not every pool that deserves to be called a work of art, but we think this one exemplifies what can happen when you literally “reach for the stars.”

In dimensional terms, it’s just an average backyard swimming pool. It measures an unspectacular 900 square feet in surface area and has a depth varying between 3-1/2 and 8-1/2 feet.

In every other way possible, however, this is one for the record books. By the time the design was complete and the plans had been approved, the project included the following list of appointments: 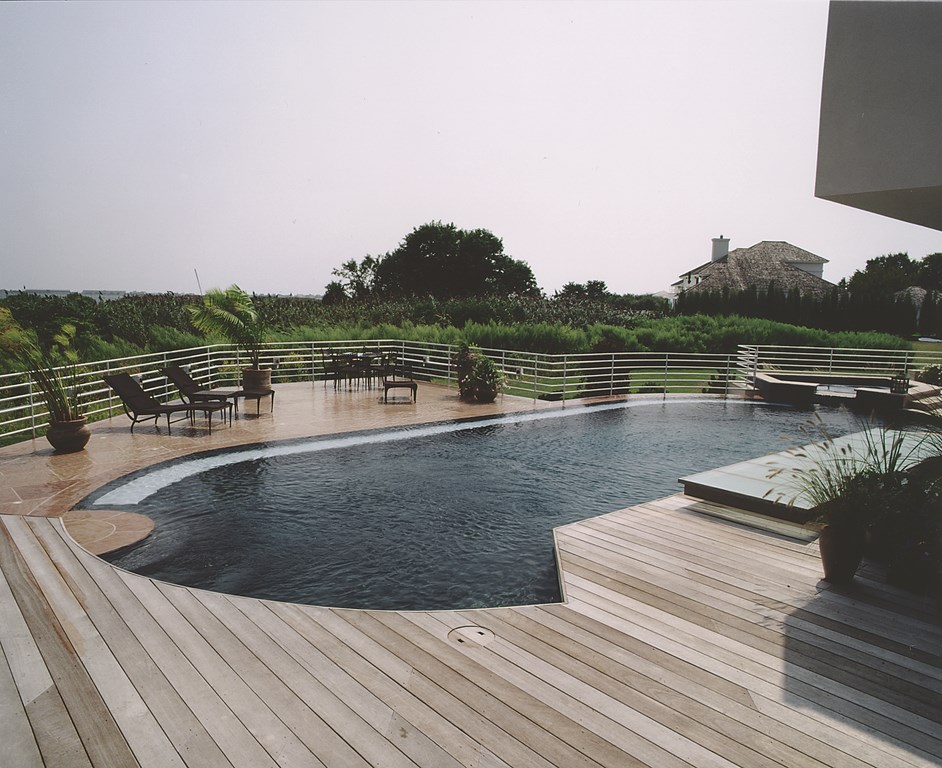 [ ] A 700-square-foot wet beach area covered in a Misty Rose stone and featuring its own in-floor cleaning system [ ] A 60-foot love seat with soft, waterproof, translucent cushions [ ] A raised spa that includes a cascade pump, dual booster pumps, a computer control system and dedicated filtration and heating [ ] A sheet waterfall over a stainless steel weir beneath a glass bridge [ ] A five-sided vanishing edge off the beach entry with lighted stainless steel rails riding above the edges 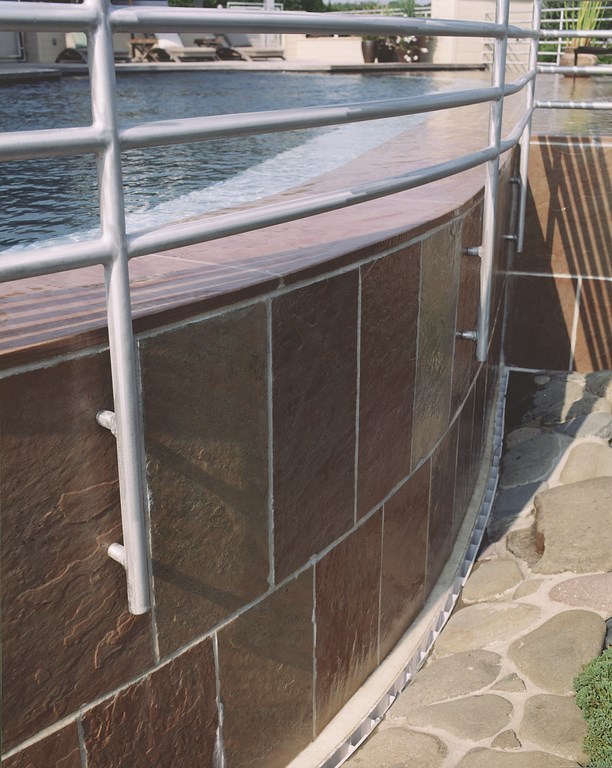 Then there’s the topper for the whole deal: 2,250 fiberoptic point lights set in the pool floor and spa benches to mimic a starry night sky.

When you add it all together, it’s an elaborate blend of form and function that’s tailor-made for a beautiful high-end home finished in cedar siding with huge windows overlooking the pool. The beach areas and the illusion created by the vanishing edges enable the homeowners to lounge in cool water during the summer while enjoying spectacular wetlands vistas that surround the property.

Of course, this is property set among the marshy tidewaters of Long Island, so the first step in the construction process involved dewatering the site. To that end, we set up an array of 6-inch suction lines around the site to gain control of the ground water.

The trick here was containing the discharge water, which could not be pumped into the nearby bay or into the protected tidal wetlands that surrounded the property. Instead, we used a pair of 2-1/2-horsepower pumps to transfer the water into aboveground concrete rings installed over gravel bases. These rings temporarily contained the water, enabling us to build the pool while staying in compliance with all local environmental codes.

With the water table more or less under control, we excavated the pool and the footings for the outer wall of the structure. The cage we set up used big steel – lots of 1-1/2-inch bars. This was interlaced with a fairly complex circulation system, piping for the underwater speakers and the cascading waterfeature as well as a fully loaded spa.

All these details were time-consuming enough on their own, but when you consider what was involved in setting more than 2,000 fiberoptic lights in the floor (see the sidebar below for more information), it’s easy to understand why we set up the dewatering system to function efficiently for several weeks as we prepared to shoot the pool with gunite.

The beach entry also took lots of time and effort, mainly because it also served as the main stretch of vanishing edge at its outer edge. It’s supported by poured concrete walls that extended to below-grade footings 12 inches thick at the frost line. A now-submerged gunite slab spans the gap between the outer edge and the pool’s bond beam. 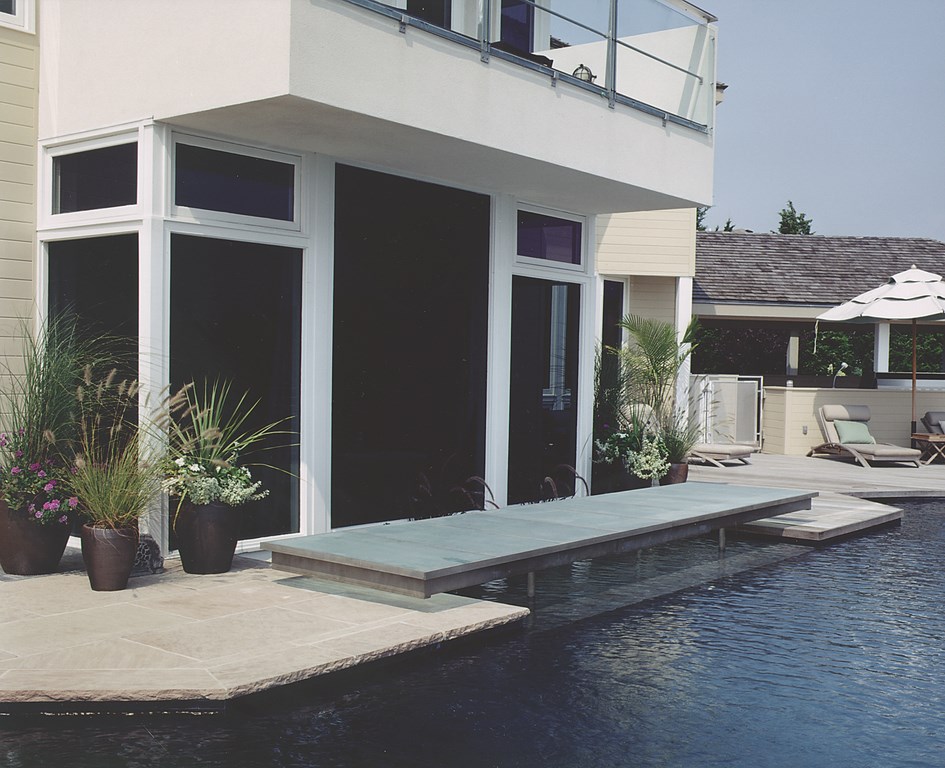 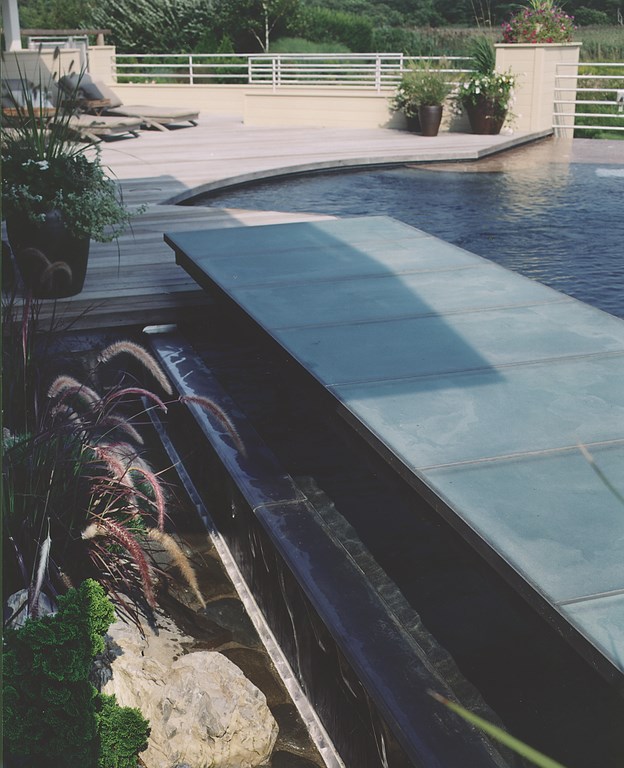 At the base of the vanishing-edge walls, we installed a custom gutter system that directs the flow over the edge to a 1,100-gallon surge tank via gravity-fed, 6-inch PVC lines.

Locating the surge tank proved to be one of the most difficult parts of the job. Because of the high water table, we had to locate it at precisely the right elevation: Too high and the gravity feed wouldn’t work; too low and the tank would float out of the ground on the subsurface water. It took a while, but we finally hit on just the right level and set the tank in place.

Once the plumbing and lighting runs were in place along with the outer wall of the vanishing edge, the gutter system and, finally, the gunite shell, the project became a matter of dealing with layer upon layer of aesthetic detailing.

We started by installing Misty Rose stone on the outer facing of the vanishing edges, across the surface of the wet beach area and around much of the pool as its coping. This stone blended nicely with the beautiful (and durable!) teak decks that were to surround much of the pool. Because the beach area is 4 feet above grade, we also installed a Moderne-look stainless steel railing – lit with fiberoptics to add yet another unusual visual dimension to the project.

The interior surfaces of both pool and spa are custom blends of white Portland cement, marble-dust aggregate and three hues of colored crystal aggregates, all hand-troweled into place around the fiberoptic lenses. Two days after plastering, we carefully buffed the surface with power sanders to expose the subtle blend of marble and these colored aggregates while leaving the lights as untouched as possible.

On the house side of the pool, a 6-foot-wide stainless steel cascade (made by Custom Cascades of Temecula, Calif.) directs a sheet of water out of the swimming pool. Surmounting this detail is a glass bridge the joins the main wooden decking area to the stone spa deck. The bridge itself is a thick, sandblasted glass whose soft, rich texture harmonizes beautifully with the materials on both sides.

These cushions are filled with the same saline mixture that’s used to manufacture breast implants and are attached to the plaster surfaces using Velcro stripping epoxied directly to the plaster finish. You notice these cushions at night in particular, when the fiberoptic lights shine through them and add a sense of surprise and novelty to the setting.

Finally, the pool includes two special underwater speakers installed in wet-niche fittings. This enables bathers to listen to music piped through speakers that surround the pool and decks: They can jump into the water and keep on moving without ever missing a beat.

Obviously, it’s not every day that you run into a client with so much ambition – and the budget to match. It simply wouldn’t have worked if the clients hadn’t been involved in the decision-making process from the start: Close communication and steady interaction were critical as we discussed all of these features and how they would all come together.

The results speak for themselves, and with no small measure of pride I must mention that the project won a Best of Competition medal and an Outstanding Achievement Award in the Northeast Spa & Pool Association’s design awards program and a Special Judges’ Award in the National Spa & Pool Institute’s national design awards competition.

It’s all well and good to hang plaques on walls, but the true satisfaction from this project comes from knowing that we produced a truly beautiful watershape – and delighted our clients in the process.

Ron Gibbons, president of Ron Gibbons Swimming Pools in Islip Terrace, N.Y., has been in the pool construction business for 37 years. He began his career at his father’s side at Paddock Welding, the first swimming pool construction company on Long Island. Nearly four decades later, Gibbons’ own company, which he runs with his son Ron Jr., builds high-end, custom gunite pools for an affluent clientele. The firm has been recognized with design awards from both the National Spa & Pool Institute and NESPA. Gibbons has served as president of the Long Island Chapter of NSPI, sat on the regional board of directors, has taught seminars on high-end design at a variety of trade events and is an associate member of Genesis 3. He’s also active in his community, having founded an association dedicated to the revitalization of the downtown area of Great River, N.Y., and served as commissioner of the Great River Fire Department.