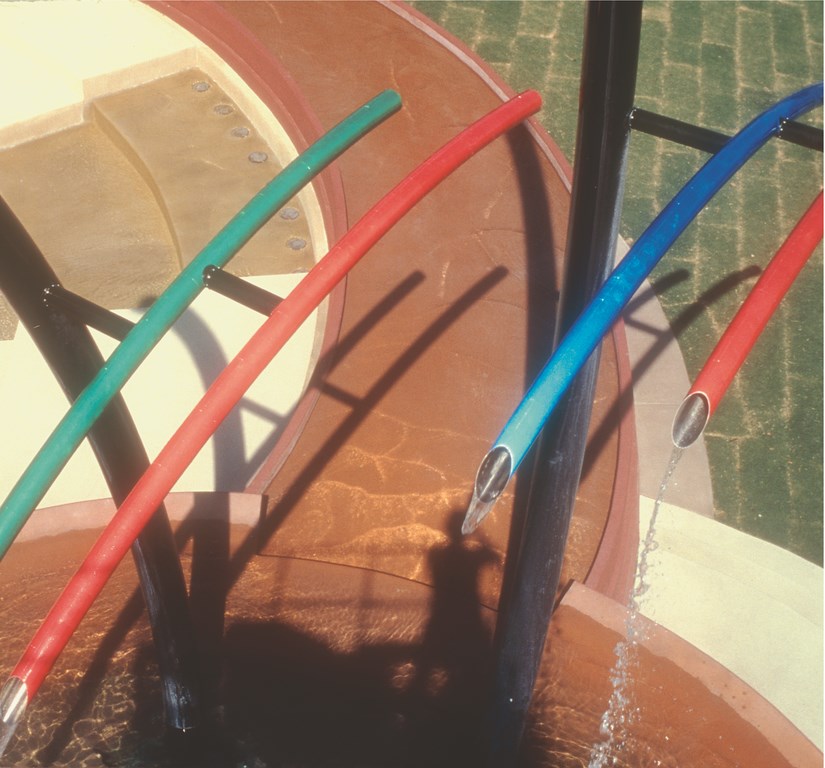 In 1997, the City of Palm Springs Arts Commission held a national competition for a sculpture to be placed in a prominent public space, the Frances Stevens Park. I was intrigued by the site’s high visibility – and by the fact that the California city wanted a sculpture that used water in a desert setting.

Working from my studio on the East Coast, I put together an initial proposal that included a number of ideas – provocative to me, but not yet fine-tuned.

It wasn’t until I actually visited the site in Round Two of the selection process that I knew just how perfect a setting was being offered – a wide-open space in the center of town, ringed by tall palm trees and low-lying buildings with the stunning San Jacinto Mountains as a backdrop.

So often in public art, a work is forced to compete with surrounding structures, but in this setting, the work could find harmony with its surroundings. As a result, I made a concerted effort to refine and redefine my approach.

Through the years, I have worked with schemes for kinetic water sculptures based loosely on the simple deer-chaser mechanism found in Japanese gardens – the Shi-shi-o-doshi. This is a stream-water-fed bamboo tube that continually fills with water until it is thrown out of balance. It then rapidly rotates to strike a second bamboo tube, making a hollow sound while pouring water back into the stream. 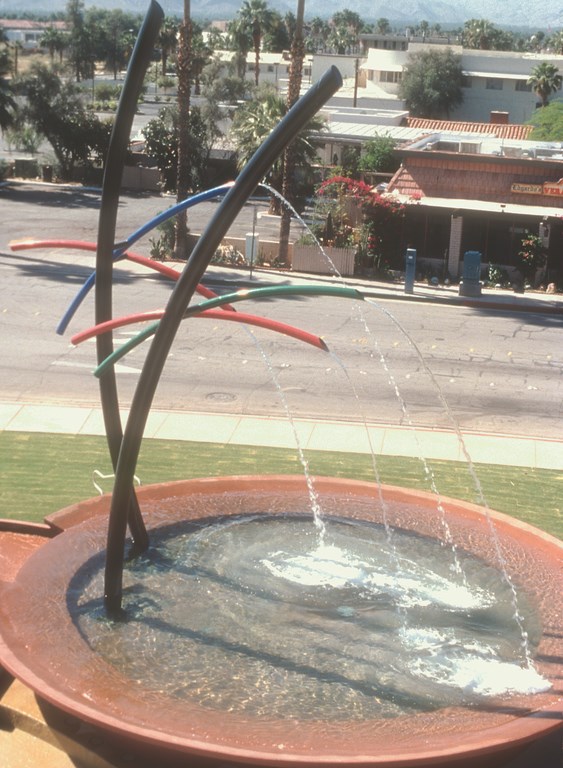 My work enlarges upon this scheme with, in this case, the sound of the water plunging into the basin replacing the clunk of the bamboo and the elegant contour of the water as it pours becoming the paramount visual effect. In essence, choreographed movement is the objective.

As it turned out, a key member of the Arts Commission had seen an earlier water sculpture of mine at the Oregon Museum of Science & Industry (OMSI) in Portland and was eager to see a variation of the same concept for Palm Springs. This was David Aiken, the commission’s chairman. His support proved decisive, and I was selected to realize the proposal.

The sculpture consists of two curved, 35-foot-tall masts, each suspending a pair of wands that move in sweeping motions as they fill with water. They then pour sleek, glasslike arcs of water into a circular catch basin. The Rainmaker motion is smooth and carefully controlled – based upon a mechanical refinement and simplification of a complex, programmable electromechanical hydraulic/pneumatic control system I devised for the OMSI project.

The sculpture itself is all stainless steel. The two upright masts are 10 inches in diameter and coated with a black automotive epoxy. The wands are five inches in diameter and have been coated with a retro-reflective signage material for high visibility. The wands are easily seen from a great distance, especially at night when they shine with almost neon-like brilliance. 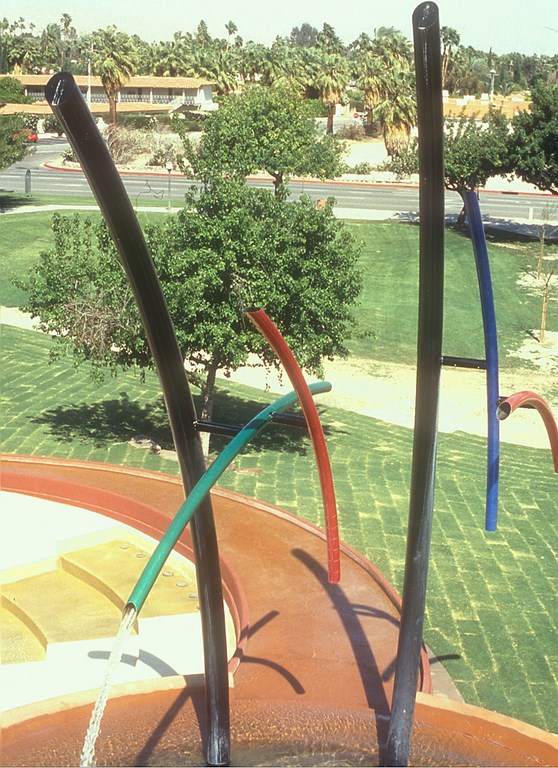 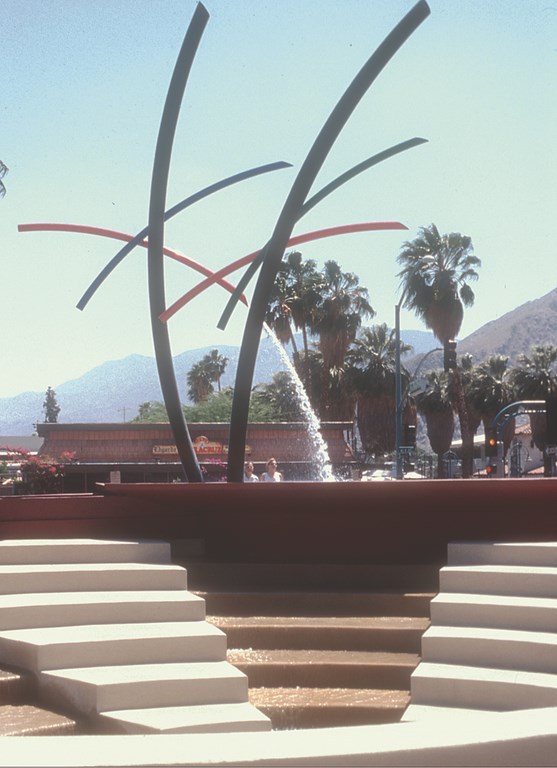 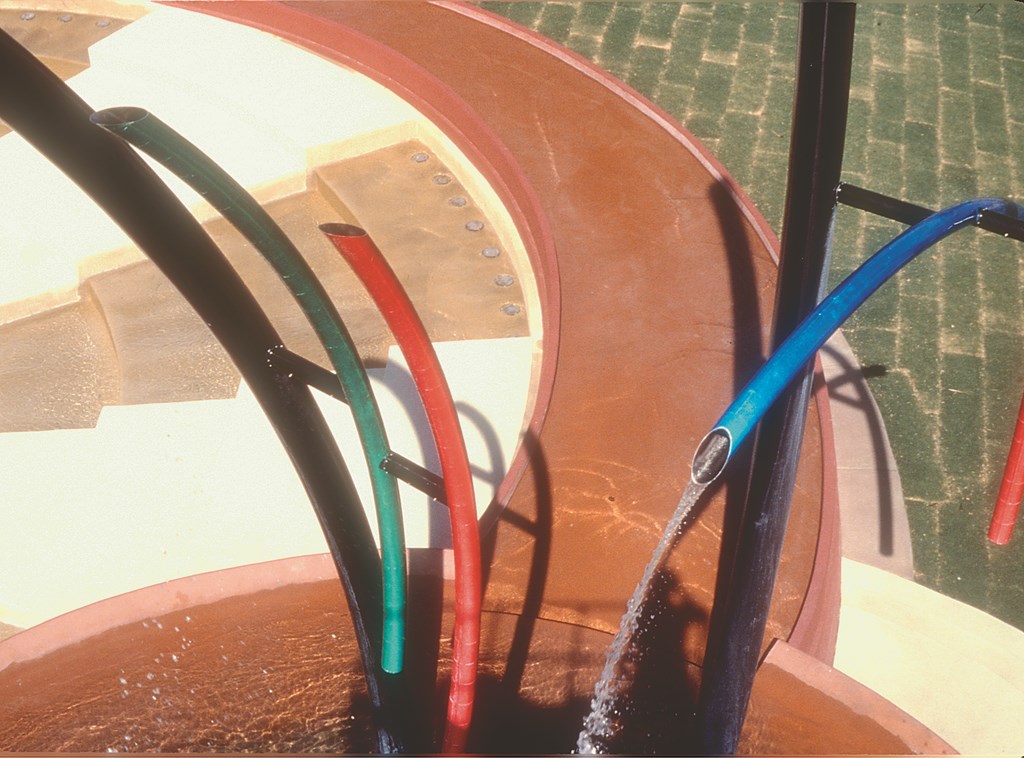 The basin feeds a raised aqueduct that encircles an amphitheater on its way to a wading pool for children. This wading pool sits at the entry to the courtyard of the adjacent Palm Springs Theater, where the splashing of water as it pours into the pool reverberates between the hard walls of the passage. Before it gets there, some of the slow-moving water is diverted to wet sections of the amphitheater steps, offering another opportunity for interaction.

The aqueduct, the wading pool and water cascading over the steps are inviting to a public parched by the intense desert heat. But it is the wands of “The Rainmaker” that give the composition its visual distinction and expressive character.

In some southwestern Native American cultures, rain dances were held to ensure the well being of the tribe. The dances either called for water for crops or entreated the Spirits not to destroy villages with flash floods and water washes. (Water appears almost miraculously in the palm canyons of southern California’s deserts, alternately and unpredictably sustaining or taking life in a hostile landscape.) 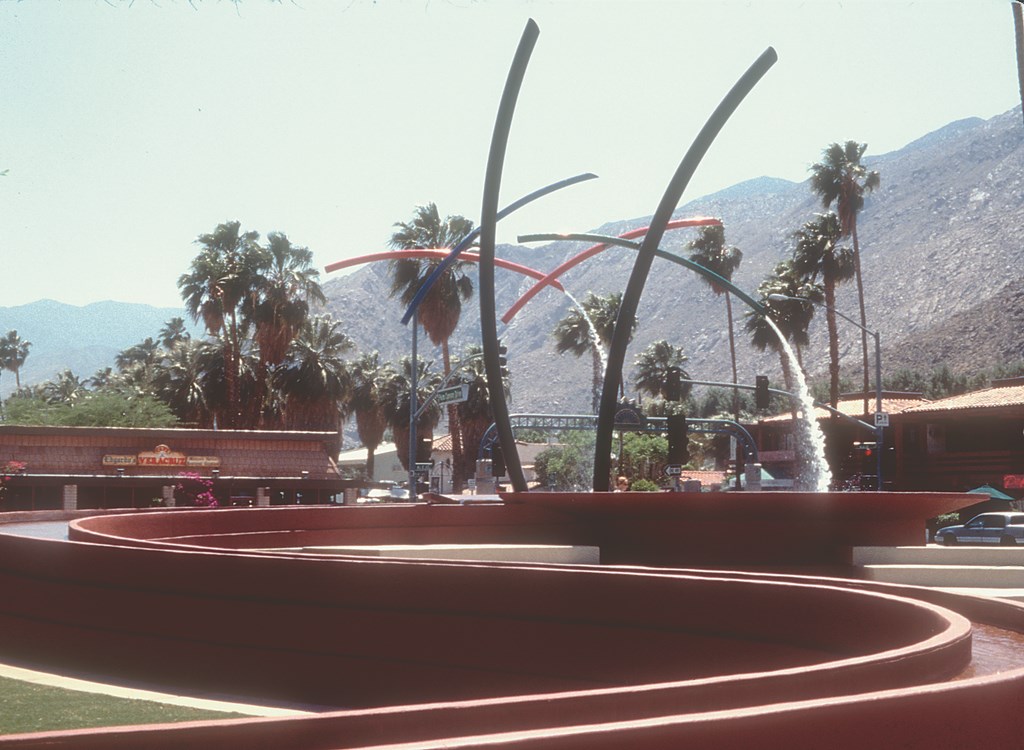 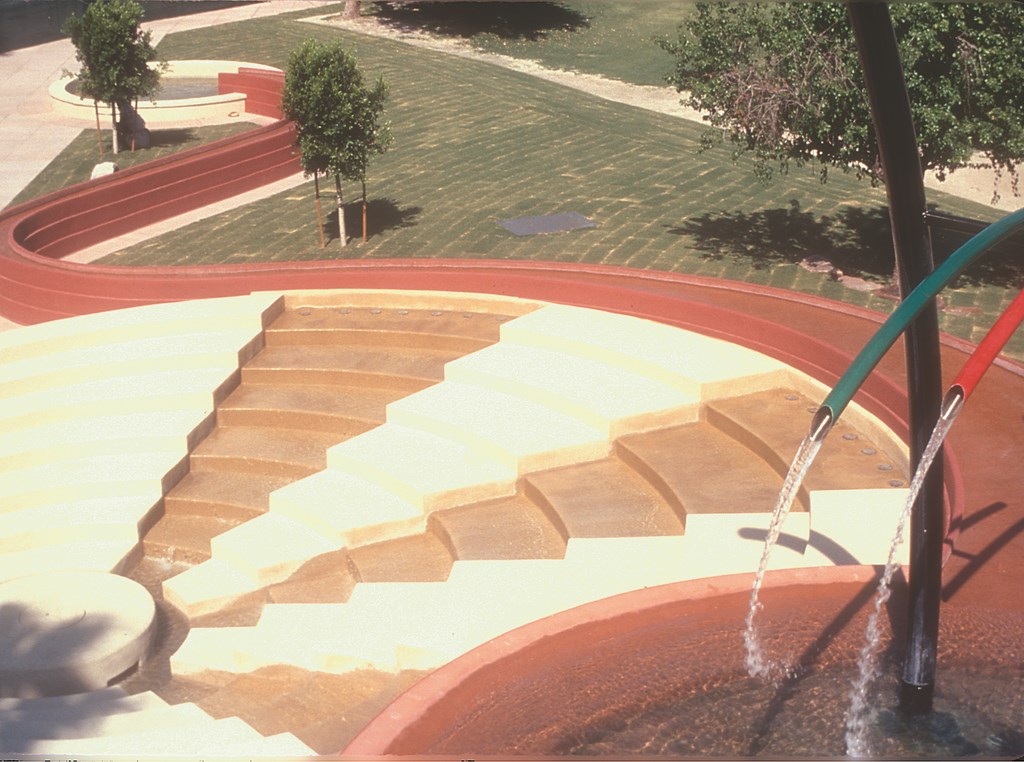 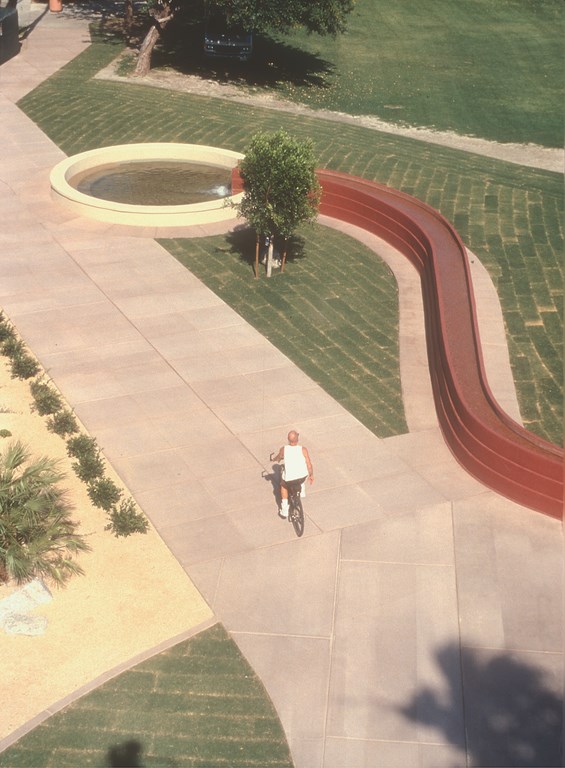 Similarly, the aqueduct was inspired by the arroyos that form in heavy rainstorms, while the amphitheater is based upon Native American gathering places. As I worked, a vocabulary of expressive elements emerged and took physical form: the Rainmaker spirit, the aqueduct or raised stream, the water-wash, the amphitheater and, finally, the collection pool.

Other qualities of the desert landscape are echoed in the colors and forms of the work, including the tall palms that rise up against the vast backdrop of the San Jacinto Mountains, the deep blue of the sky, the brilliant greens of the irrigated grasses, the deep red of the ubiquitous terracotta tiles and the burnt umber of local rock formations.

As this abstract program developed, I could not lose track of the need to treat the design as a destination for community recreation, relaxation and comfort as well as a work of art. After all, the space in which The Rainmaker gyrates is in the central public park of the city. From my perspective, however, the task of making this corner of the park inviting to passersby was simplified by the opportunities that arise when water is part of the picture.

The aqueduct, for example, not only cradles the amphitheater, but it also gives visitors a chance to walk through or even sit in the water as it flows gently over the wet areas of the steps. Throughout much of the year, it’s so incredibly hot that passersby take the opportunity to cool themselves by sitting in the water – and then are dry again within minutes of leaving the amphitheater. A heat-resisting deck coating was employed that permits visitors to walk the dry areas of the amphitheater in their bare feet on even the hottest desert days. 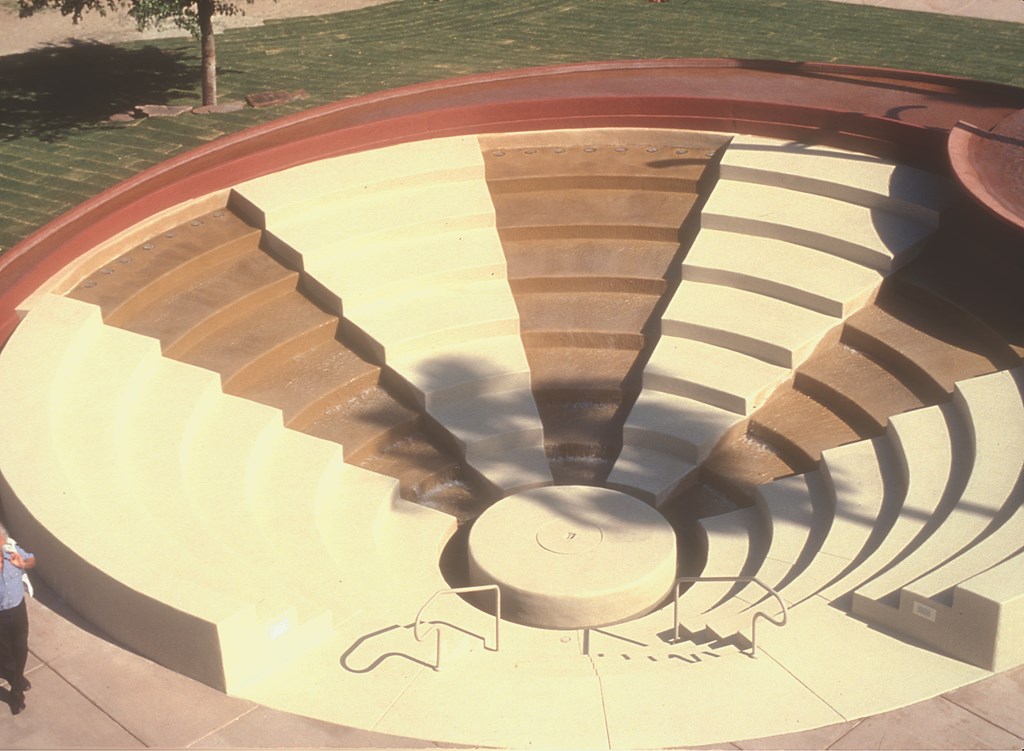 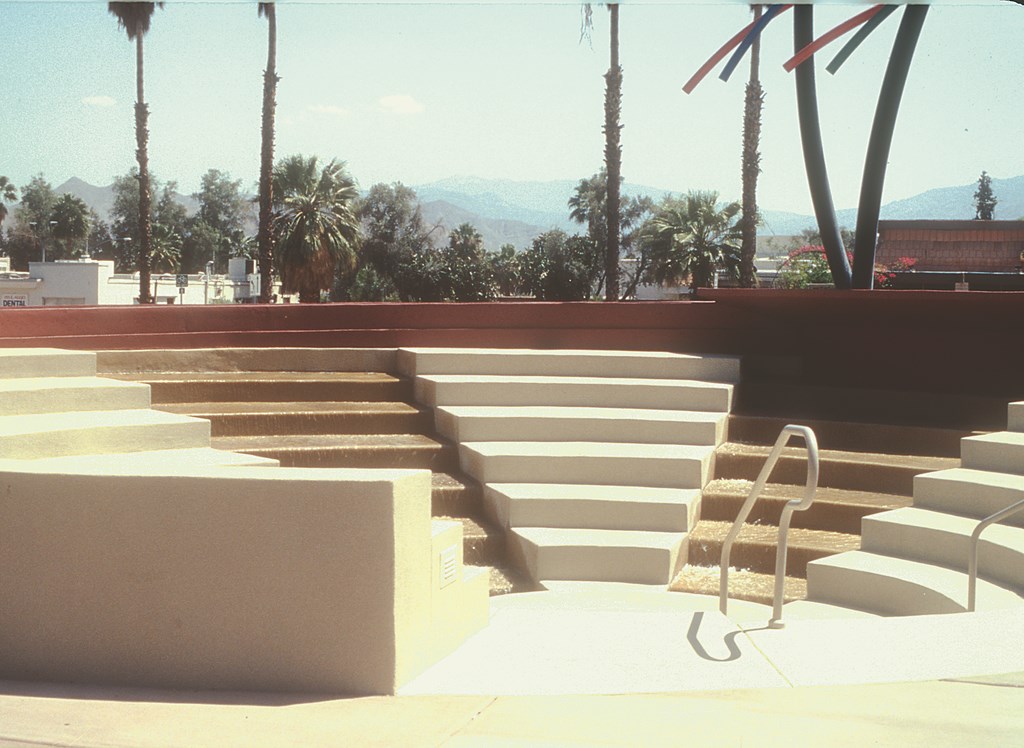 All of these practical choices were made in close collaboration with the city, principally in the person of Diane Morgan, who was so deeply committed to the project’s success that it allowed us to navigate through some of the toughest problems I’ve ever encountered, including poor performance of a prime contractor that led to ridiculous delays and increasing restiveness on the part of a rightfully frustrated city council. (For details on how community support saved the day, see the sidebar above.)

Key to turning things around was the participation of concrete specialist Rich Parzinsky, who came on the scene at a critical point.

He believed in what we were doing and was determined to see things through to completion. What followed was a tremendous amount of jackhammering and re-fitting of the work that had already been done, but badly. Without Parzinsky’s efforts, the project would never have been realized. Considering all the difficulties, the final product is of a higher quality than we had any right to anticipate.

After working long hours in terrible heat, Rich, his crew and I would relax in the bar across the street, wait for relaxation to settle in and then compliment one another on the high level of our collective workmanship – a far cry from the initial struggles on site and for me a level of camaraderie that made this one of the most rewarding work experiences I’ve ever had.

Before long, it was opening day. The city staged a celebration, putting up big tents to shield guests from the hot sun and offering a day of speeches, refreshments and music leading up to the ceremonial throwing of the switch that brought the sculpture to life.

David Curt Morris is a sculptor based in New York. He earned his masters degree in architecture from the Massachusetts Institute of Technology in 1972 and was a fellow at the Center for Advanced Visual Studies at MIT from 1972-1973. His architecture and design résumé includes work with Lawrence Halprin Landscape Architects, Marcel Breuer Architects and Skidmore, Owings & Merrill, among others. He has taught in the School of Visual Arts at New York University in the University of Illinois’ Department of Art and Architecture. Morris’s sculpting career encompasses a variety of significant commissions as well as exhibitions staged throughout the United States. His current works in development include variations on the Rainmaker concept (seen in his article in this issue) that can be run in line with swimming pool equipment.