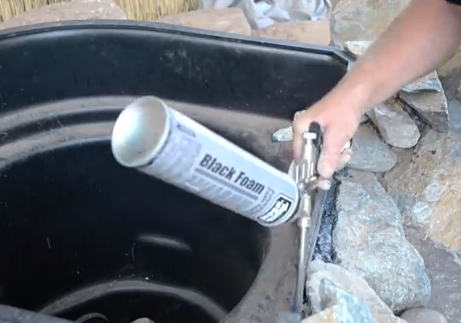 As the process of installing this beautiful little pond moves toward its conclusion, we find as always that we have lots of smallish details to consider – including the important task of creating a great look with the waterfall’s spillway.

This step may not take the strength or persistence or grand vision of some of the project phases covered to date in this video series, but I can assure you it takes both care and finesse – especially when it comes to tuning the flow to make the spillway a star attraction rather than a perpetual disappointment.

As I mention in the video, I was lucky to find just the right stone for this particular spillway. More often, this hunt involves lots of trial and error and occasionally some hammering and chipping to produce a stone with just the right profile. In addition, I had previously selected a number of the other key rocks to speed the filming process; I wouldn’t want anyone to get the impression that this process is a snap – not by any means!

There’s also a lot of information on using foam in this episode. It can be an intimidating material at first, but once you gain some experience in working with it and making it do what you need it to do, applying it becomes second nature and the sealing process takes minutes rather than hours. The other great thing about foam is that it forms good but relatively fragile bonds, so the stones and pebbles it locks into place can be broken loose in the event repairs need to be made that involve removing the faceplate or fiddling with the liner.

Of course, my obvious hope is that this work will only need to be done once. That’s why this video is unusually detailed: It’s vitally important to the overall success of the project, and I hope I’ve conveyed the point that I want to do things in such a way that water flows only where I want it to flow: If it doesn’t, I know I’ll be coming back to repair things sooner rather than much, much later.

To see this step in all its glory, click here. And again, depending on which server you use, forgive the ad’s intrusion at the 10-minute mark!