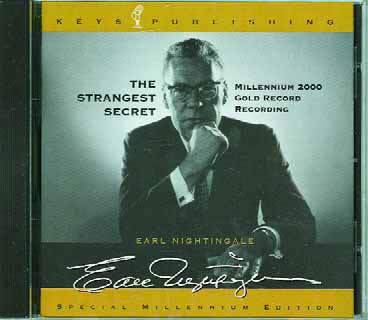 As we move through the long, hot, busy days of summer, it may well be that, like me, you have difficulty finding the time to sit down and read. This is one of the reasons I’ve gotten into audio books lately: I listen to them while traveling from job to job, and I find they’re a great way to keep my mind stimulated when I just can’t find the time to concentrate on the printed page.

In that spirit of aural stimulation, I thought I’d reach back to the origins of this special medium and listen again to a classic motivational piece I’d first heard 15 years ago from legendary self-help guru Earl Nightingale.

Called The Strangest Secret (issued by Nightingale-Connant Corp.), the original recording was made way back in 1956, when Nightingale recorded his thoughts to help motivate a large group of employees. He was in the insurance business and had long been a practitioner of interpersonal motivation as a company leader and manager.

When he originally made and shared this particular recording, those who heard it were so impressed that they passed it around to people outside the company, and it developed such a grass-roots following that RCA eventually picked it up and released it on vinyl. Nightingale’s talks went on to become the first spoken-word recording ever to win a gold record. Since then, he has re-recorded the piece several times, adding to it in places but always sticking to his core messages.

It’s still widely available on-line in various forms, but the best version yet was released in 2000 when Nightingale-Connant, the publishing empire Nightingale founded as a result of the wild success of the recording, released a boxed set of compact disks with all sorts of interesting special features.

Through the years, Nightingale has been credited with single-handedly starting the motivational-publishing business, and it’s easy to see why his approaches caught on and became so influential when you listen to the original tape. It’s just 36 minutes long, yet it’s so packed with ideas about self-improvement in business and in our personal lives that it stands up after multiple listenings.

Nightingale was one of the first people to see the value of empowering others to think about success in different ways, and he also examines the big questions of why some people achieve success while many do not. His ideas about identifying objectives, setting goals, creatively working with plans and several other building blocks of success are so enduringly pertinent that they have been reiterated, re-appropriated and echoed for years in the works of others who have followed in Nightingale’s footsteps, including Zig Zigler, Steven Covey and many, many others.

For my part, absorbing this kind of material on a regular basis has been a huge help to me in business and on various other fronts. I’ve found that by repeatedly considering this kind of information, I have become far more confident of my own abilities and creativity and am always finding new and useful ways to approach clients, projects and other challenges.

What Nightingale has taught me is that success in watershaping (or any other business, for that matter) boils down to your mindset. Perspectives such as his don’t need to be fresh or all-new for them to be helpful. In fact, with this and other works by Nightingale, the proof is in the fact that for more than 50 years, successful people have turned to his thoughts over and over again to guide them.

When I recently listened to Nightingale’s original recording, I’m confident I’m still getting as much out if it as any of those insurance executives did five decades ago.