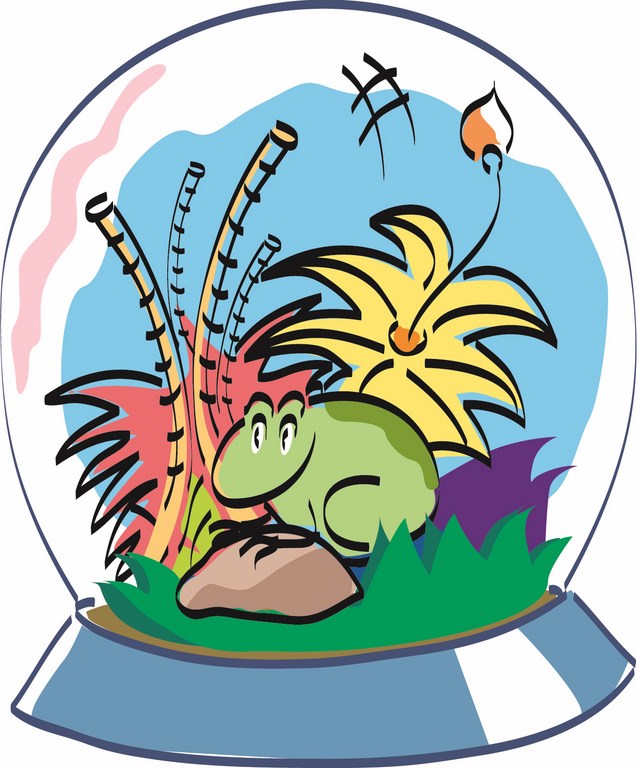 The answer: Think small. You don’t have to compromise on style or substance, but simply by thinking on a smaller scale, you’ll open up a lot of possibilities you might not have considered.

About three years ago, for example, I was brought in on a job to do a quick fix for a very small but prominent area of a client’s yard. The homeowner wanted to completely rework the entire property, but it was clear there was a lot of other work to do first.

The quick fix went very well and the clients were pleased, so they asked me to look at an interior atrium they wanted redone. They wanted some sort of waterfeature there and had approached a few watershapers but were told the space was too small, that it would be too expensive and that it wasn’t worth the time.

More time passed, and they had grown even more tired of looking at the glass-enclosed eyesore in the middle of their house.

A trapezoidal space about 10 feet by 5 feet, the atrium had a white stucco wall, rock-hard dirt about 6 inches below grade and could be seen from the kitchen, family room, living room, dining room and main outdoor entertaining space. It’s pure California-style ’60s living, a very open environment with many windows both interior and exterior that expose any area of the main living space to views from many angles.

Stuck right in the middle of this space, the atrium needed to blend into the existing style of the house but become a clearer focal point. The owners wanted to hear the soothing sound of water gently flowing in the background; they also wanted to soften up this very exposed space, so plants were a must, which meant we needed to break up the space to contain both a small garden and a small watershape. 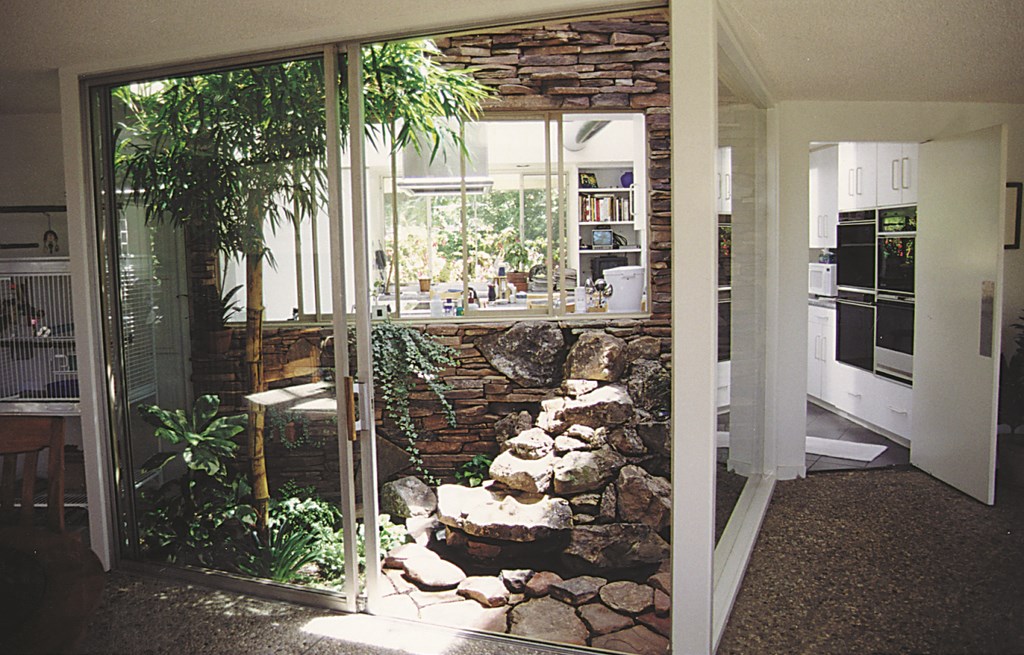 This required more specific planning and patience, always with a goal to make sure the space would be used to its fullest and that not an inch was wasted. This presented a design challenge as we worked to integrate the interior design of the house with a new watershape and landscaping.

As is the case with many of my projects, this house has a very unique style. Wood and natural rock are blended in the walls, ceiling beams and even the floors. The family room, which borders the open side of the atrium with a sliding-glass door, has a concrete floor with large, exposed aggregate. This had originally been an outdoor space and had been brought indoors with a roof and skylights.

In keeping with this style, we went searching for some kind of treatment for the wall of the atrium that would soften its prominence and maintain its use of natural materials. We settled on chocolate moss stone and other lichen-covered boulders.

As I came to know them, I valued the homeowners for being easy to work with – but very particular about how they wanted the wall to look. To make sure we did things right and at modest cost, I hired a stonemason who would work weekends as a side job. This was perfect: The clients were around while the mason worked, making it easier to achieve the specific look they wanted.

Once work started, we decided to partially ledger the wall. In the middle of this wall is a window, which allows you to see into the kitchen from the family room.

The mason completed a 5-by-3-foot section to begin with, then together we selected pieces to fill in the next small area. Working in small sections, the process took about three months to complete but resulted in a natural-looking wall that melds beautifully into its surroundings.

No pattern is evident in the ledgering: Larger, flatter stones were specifically selected to lay flat against the wall, which breaks up the ledgered look and shows the unusual stratification and fossil-like qualities of many of these rocks.

We also created true “ledges” using flat stones cantilevered out from the wall; these are capable of holding small pots and allowed us to place plants anywhere on the wall to soften the stone as much as we wanted. We colored the mortar black, adding depth to the wall and lessening any impression that this is a “manufactured” formation.

What about the watershape?

It juts out of the wall as a natural, spring-like waterfeature that has small trickles of water flowing over lichen-moss boulders into a small, 3-inch-deep basin that surrounds the entire rock formation. A removable stone covers the return line and keeps the water flowing gently over the stone instead of shooting up from the hole. The basin allows water to flow from any direction over the rocks, creating a soothing sound that echoes off the surrounding windows of the atrium.

The watershape was constructed on a concrete base that was poured in only half of the atrium. This left enough space – about 5 feet by 5 feet – to plant a great interior garden.

You probably think I’m nuts for getting so excited about such a small space, but small spaces can offer the best opportunity to create unique gardens. The key here is finding the right specimens to complete the environment and make a dramatic statement.

With a skylight above, we worried that the plants would get fried on a hot day. So we started by securing a shade cloth over the skylight on the roof.

Through our many trips to unusual nurseries, we settled on a bamboo specimen that definitely makes a statement: Bambusa vulgaris has a single, 7-foot-high trunk with about a 4-inch diameter cane. The cane is yellow with prominent green stripes scattered vertically along its length, while the foliage primarily grows from the top of the cane, creating a canopy for other plants below it. 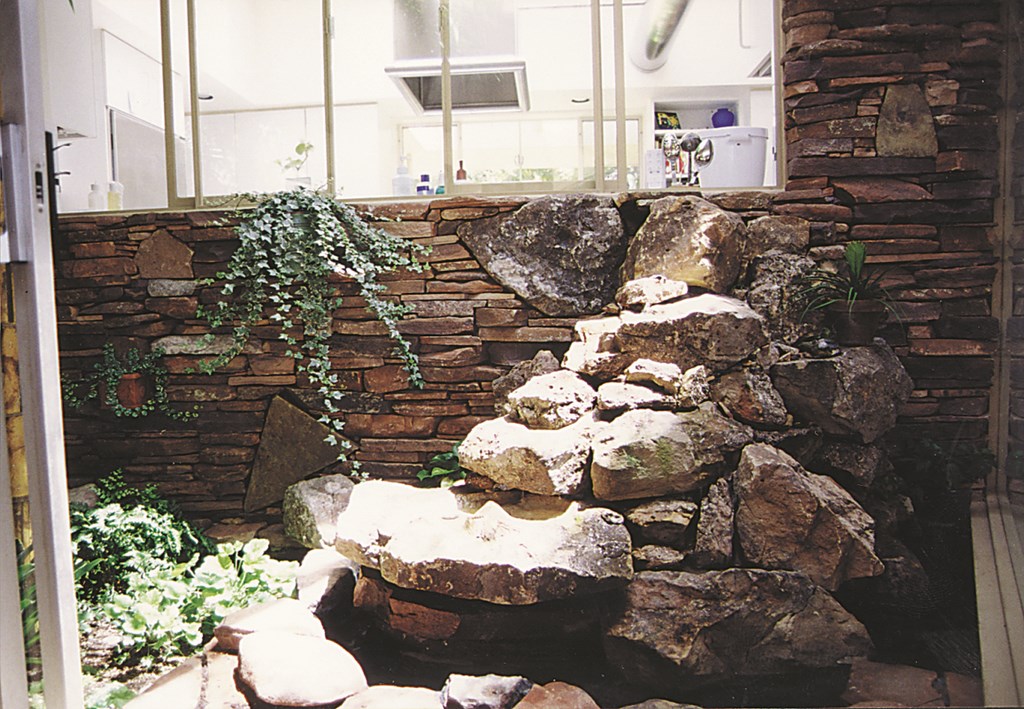 This particular bamboo usually maintains its lonely, single-cane status, but this one proved to be so happy, it grew a friend. We topped that cane about a foot below its benefactor, basically because we weren’t sure what to do with it. So far, we’re waiting to see what it does over the next year before determining if it will get too large for the atrium and should be transplanted elsewhere. In the meantime, it seems to be staying small – almost as though it knows the consequence of getting bigger is almost certain death by transplanting.

Below the bamboo, we planted three unusual tropical specimens – one variegated, one Bromeliad with red leaves and a yellow flower, and one an Asplenium bulbiferum (Mother Fern). Coral Bells (Heuchera sanguinea) and Baby Tears (Soleirolia soleirolii) were added for ground cover. The Coral Bells will produce a profusion of tiny red flowers, while the Baby Tears will spread throughout and help keep the soil moist.

On the ledges, we placed pots with smaller Bromeliads with purple and orange flowers, Needlepoint Ivies and variegated Creeping Fig. The final touch was adding air plants to the crevices we left in the wall. These plants thrive on moist air, which is plentiful in this atrium.

Unfortunately, the plants must be watered by hand to avoid splashing the insides of the atrium windows. So we combined hand watering with a bit of misting to achieve the humidity necessary for these plants to be at their best.

The final look of this pocket garden/watershape encompasses our homeowners’ love of fossils, earthy materials and naturally occurring creations. Every square foot of the atrium wall has something different and interesting to look at.

Even though they were thrilled with the final product, which took almost a year to complete, the husband still felt that there was something missing: He’d always had the desire to raise an exotic reptile and thought this atrium was now the perfect environment for the beast to occupy.

After hearing a few “over my dead bodies” during their discussions of this matter, I decided to step in and remedy the situation. Lo mein (short for “low maintenance”) now lives very happily in the bamboo in the atrium. He is a reincarnation of Iggy, a much-beloved Beanie Baby. The husband was so amused by the sight of this creature in the tree that he acquiesced and agreed that this was the best solution.

Did you think we were finished? So did we. One Sunday morning about 6 months after we completed the atrium, however, the wife wandered out into the family room to spend some leisurely time with the morning newspaper. As she entered the room, she thought she was hallucinating when she caught sight of a toad the size of her fist.

Her mother is fond of frogs and had placed many miniature statues of these amphibians in the atrium. The homeowner therefore thought this was a joke – until the frog jumped! She chased the critter around the family room (I wish I had been there to see it), unable to capture it, when it suddenly dashed into the atrium and, with lightning speed, buried itself in the soil.

So far, the toad has not been given a name, but it’s been sighted on many occasions by various family members, one of whom was heard to say, “It wasn’t the size of a fist – it was the size of my foot!”

As the saga continues, everyone seems to have settled into the reality that a live creature exists in the atrium. If you have any clever names you would like to contribute, we’d love to hear them!