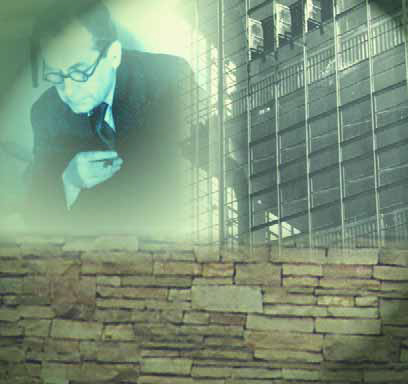 For me, the simplicity and elegance of the International Style was just about the best thing going in 20th-century design. The followers of Walter Gropius in the Bauhaus movement held this simplicity – expressed as a cleanness of line, a uniformity of materials and the establishment of clear relationships among architectural planes – in absolutely the highest regard.

I always try to integrate these design principles into my own work – and one of the ways I do so is through the ledger detail we’ll examine this time around. It’s an expensive approach and can’t be done with every project, but when my clients see the potential and get excited about the look, it’s one of those touches that can make a great project into an extraordinary one.

Don’t let appearances deceive you: This isn’t simple to execute and involves an entirely different approach to setting up the walls, the bond beam and both the interior and exterior finishes. But once you get the construction details down, a whole new set of design possibilities will come into play in your work.

The project shown here features a dry-stacked ledger both inside and outside the pool. 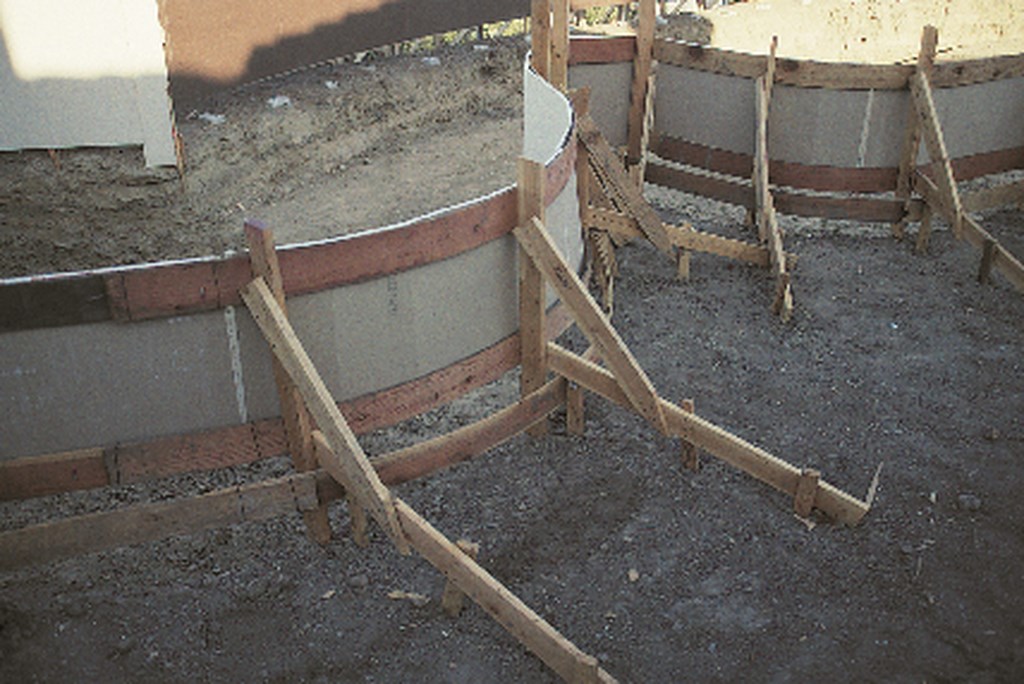 We prepared the wall for this at the forming stage, setting up the forms in the usual way on top, but leaving a gap about six inches thick at the bottom (Figure 1). Steel was then doweled out into the void created by the framing and connected with a nose bar to give it the structural rigidity of a small, cantilevered footing or ledge. 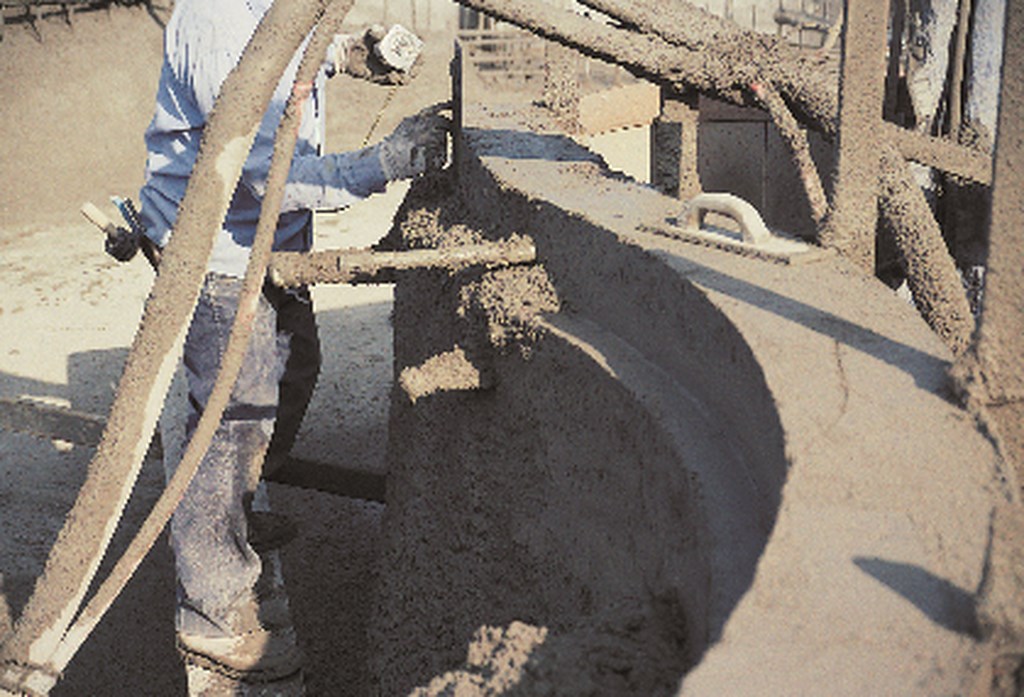 Next, in the gunite stage, we shot the top of the beam and wall to the desired thickness and created a structural ledge at the base of the form that, once cut and cleaned, will support the stack of ledger stones (Figure 2).

As is shown in Figure 3 below, the framing penetrates the ledge at intervals. It’s important to set these vertical members up so they can be removed easily — and then dry-pack the voids.

This ledge is the key to the whole detail. Yes, you might put down some sort of footing or blocks and stack the stones (independent of the pool wall) on the outside wall as an afterthought, but then the problems begin (not the least of which is the fact that you can’t do anything comparable on the inside of the pool that has any structural integrity). 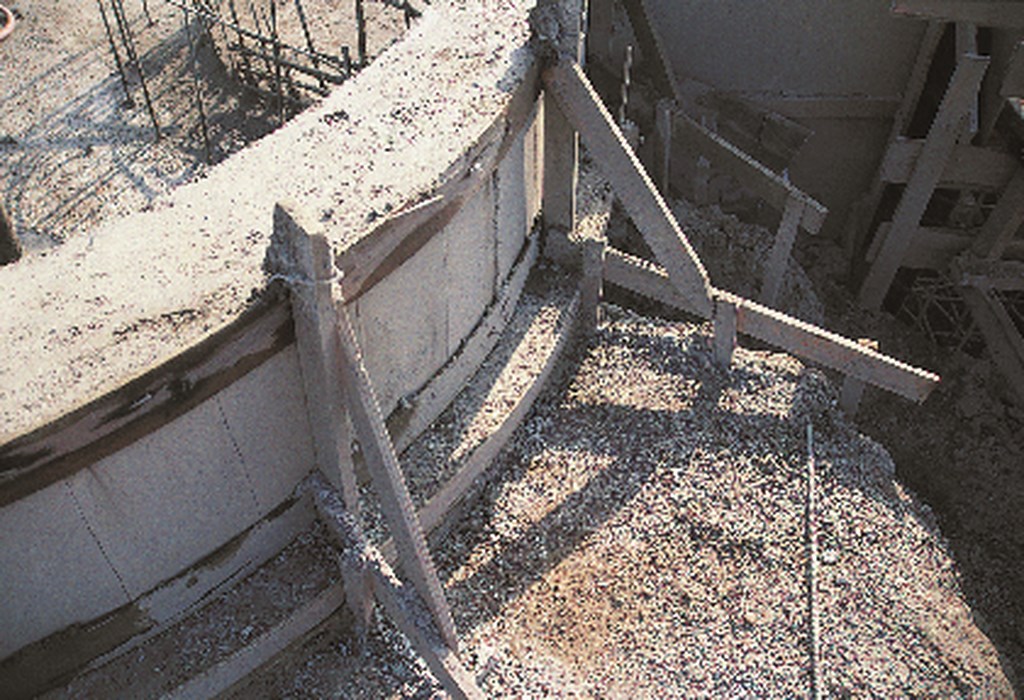 The ledge seen here is part of the shell. If we’d set the stones on an isolated support such as a footing (as is typically found in ledger construction) and attached the stone itself to the wall, differential settlement will cause the stones to move. Before long, cracks will develop in the coping material that bridges the wall (that is, the pool structure) and the isolated footing (on which the ledger stones sit).

This shelf approach works equally well inside and outside the wall, and this is where the simplicity I mentioned up front comes into the picture.

Where an ordinary pool might have decking of one material, a face veneer of another material, a coping of a third material and a waterline treatment of yet another material, the aesthetics of this structure feature a seamless flow from the home and onto the deck and into the pool. This is simplicity itself.

Of course, there are practical issues involved. The steel crew must be instructed in how to set up the thickened walls and shelves so they work structurally; the forming crew needs to know how to set up the beam and shelves to minimize problems with the shoot; the plumber needs to be aware of the penetrations and the extensions required to move through the ledger; the inside wall needs at least three coats of Thoroseal (both gray and white) to prevent any moisture penetration to the outside wall; and, finally, the masonry crew must know how to dry stack the ledger stones in such a way that you don’t see any filler or grout (Figures 4 and 5). 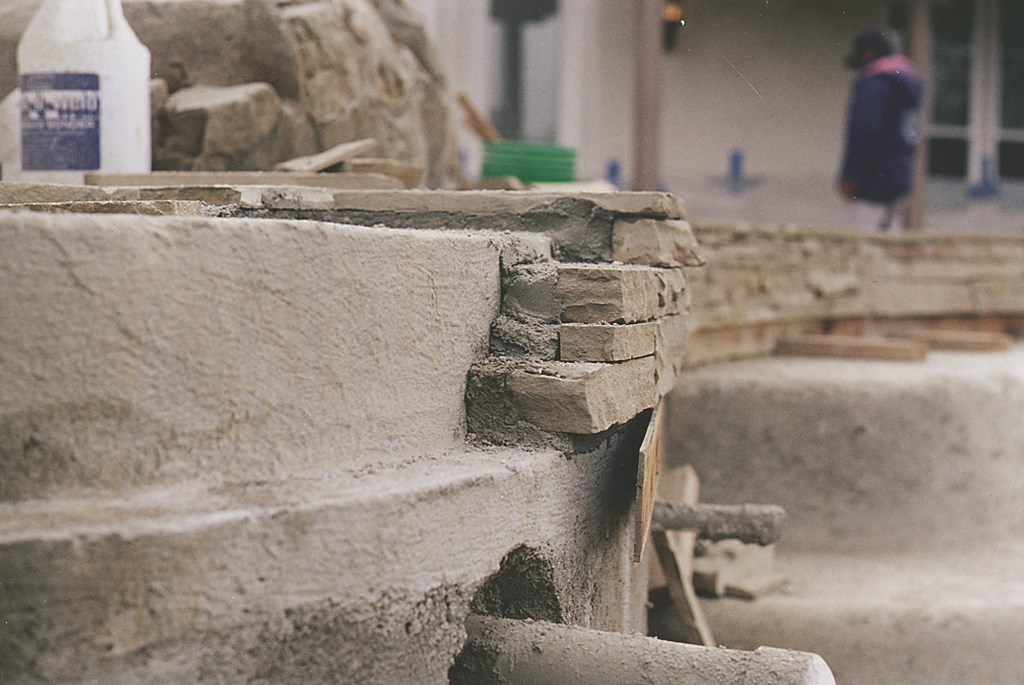 In Figure 4, notice that the ledger stones project over the ledge on the inside of the pool to allow for eventual application of a finish up to the bottom of the ledge. 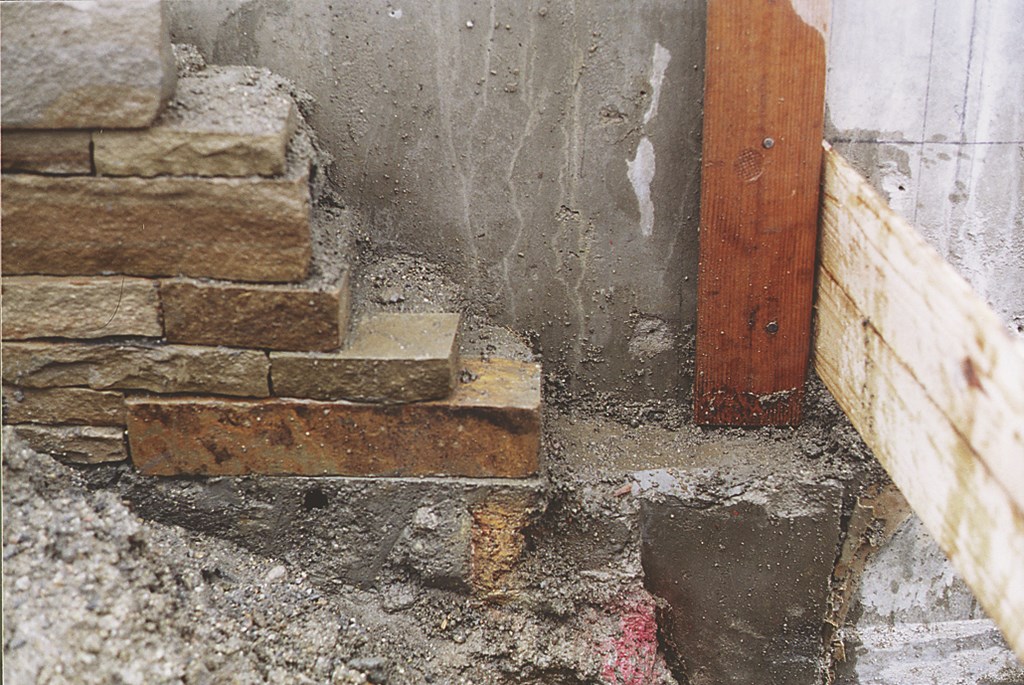 By contrast, on the outside of the pool (Figure 5), the ledger is set up even with the outside line of the ledge.

When it comes together, an approach like this one minimizes the sort of “visual noise” against which the Bauhaus designers rebelled early in the 20th Century – and that’s all to the good, as far as I’m concerned.

Finally, a modest suggestion: Those of you who are truly custom designers and builders may want to learn more about Gropius, the Bauhaus and their influence on the way your clients look at the world and perceive your work. You’ll find that many of today’s prospects are judging your ideas in a context far deeper than you ever imagined!