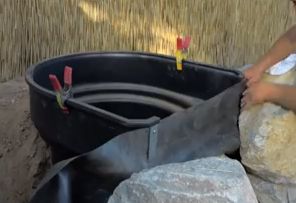 The project we’ve been covering in this series of videos is definitely in the home stretch, but there are several key details that still need our attention. The most important of these from the perspective of long-term performance is properly securing the liner to the faceplate of the waterfall/filter unit.

As seen in the video linked below, this step in the process is all about preventing leaks: No matter how small they might be, the fact that they’d allow water to flow behind the rockwork we’ve so painstakingly placed and would eventually undermine and compromise the structure we worked so hard to lock into place is enough to make me focus on every detail here.

So I go through a whole ritual, making certain there’s no dirt or dust on the liner, checking to see that there’s no tension, making sure there are no gaps in the bead of sealant and looking one last time to assure myself that there aren’t any wrinkles or folds in the liner behind the faceplate: I want no avenues for leaks of any kind, period.

One thing I didn’t emphasize in the last part of this series while we were wrestling with the waterfall’s many boulders is the fact that I want the rockwork to come together in such a way that I have relatively free access to the front of the faceplate: I want to be able to tighten every bolt to my satisfaction. If I set a big rock that makes it impossible to get even an offset screwdriver into position, I won’t be able to reach that level of satisfaction and will have to make late adjustments in rock positioning – something I definitely want to avoid.

Also – and I didn’t mention this in the video – in this particular case, the fact that I’ve inserted an extra “shingle” of liner to make up for a small shortfall at the faceplate makes me be doubly careful in working with the two liners to make certain there are no avenues for leaks, even if they’re of lesser concern because they will be above the waterline.

To watch the faceplate-attachment process in detail, click here.