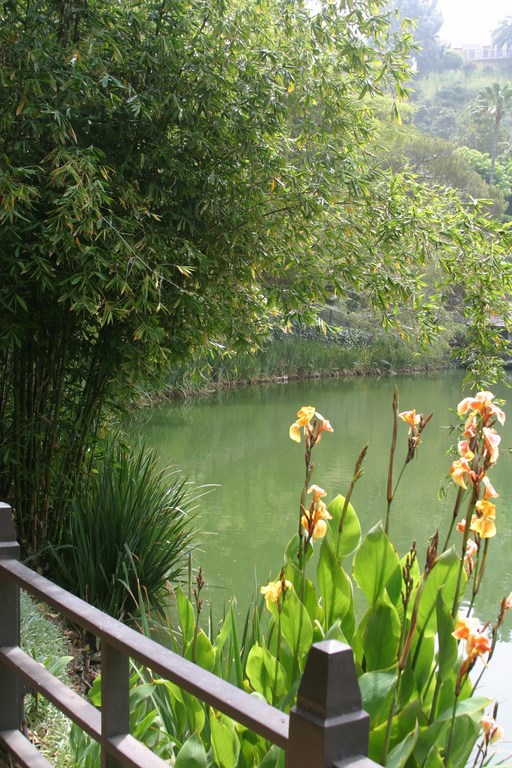 During a lifetime of driving up and down the part of Sunset Boulevard where it finally meets the Pacific Ocean, I’d often noticed the sign pointing to “Lake Shrine” but had never taken the time to stop and have a look.

I suppose the “shrine” part of it made me think it was the exclusive preserve of adherents or members of the Self-Realization Fellowship – an organization I knew nothing about other than that their facility was in one of Los Angeles’ most beautiful locations.

I finally overcame my hesitation about visiting the Lake Shrine a couple years ago, when a friend told me it was a place where people of all faiths and religions were welcome to stroll, meditate and enjoy the tranquility of the setting. Curiosity overcame skepticism and I finally visited the place. What I found at the Lake Shrine was a serene, calm, meditative oasis of lush, beautiful gardens surrounding a lake.

To this day many years later, the minute I drive through the entrance gate, I’m always swept up by sensations of serenity and peace – and have since adapted some of the shrine’s features in designing tranquility gardens of my own.

DRAWN TO THE WATER

My connection to the place is now professional as well as personal.

In February 2005, I gave a talk on “Landscapes in Southern California” to the annual meeting of the California Landscape Contractors Association. In the front row was a gentleman who appeared to have come straight from work in a garden and seemed incredibly well informed about the Pacific Palisades area of Los Angeles.

He asked several pointed questions and seemed quite interested in the selections of “different” plants I was presenting for the audience’s consideration. He left early, so I didn’t get a chance to chat with him or even meet him formally. 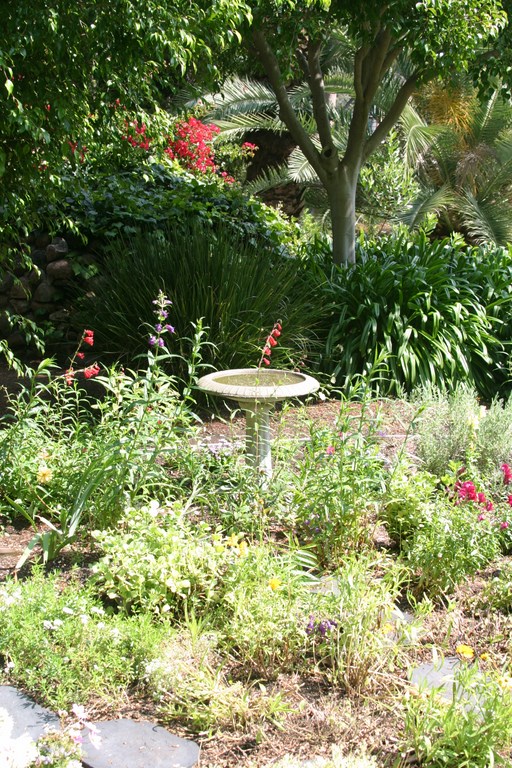 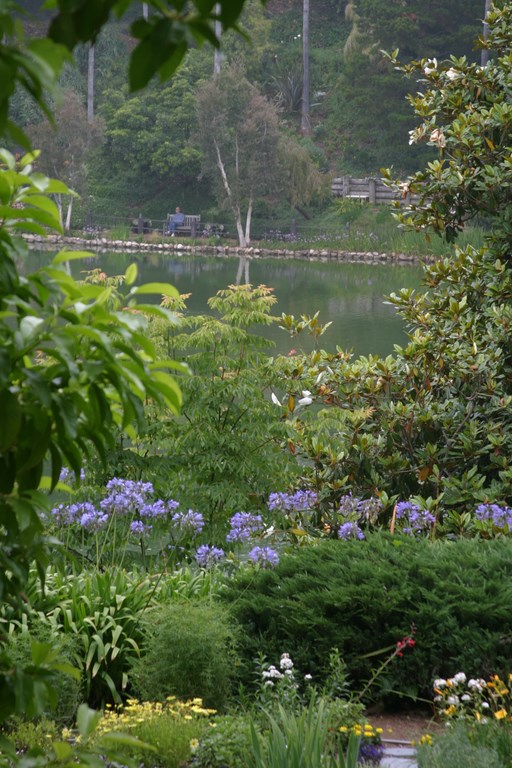 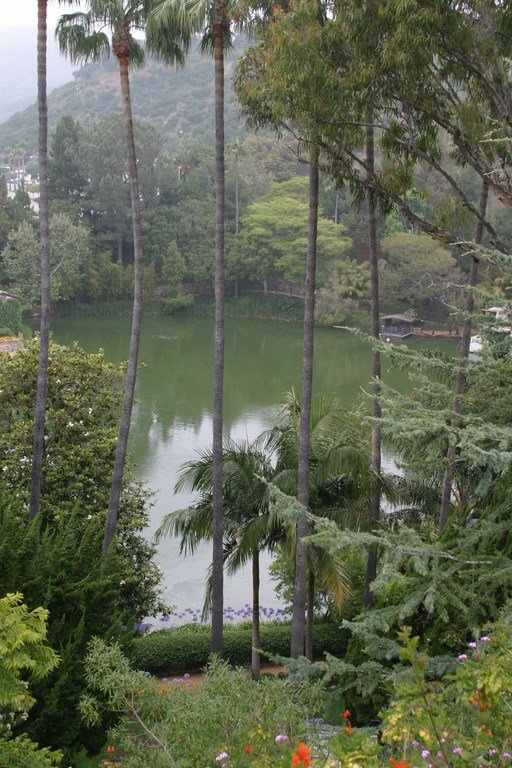 About six weeks later, he called me to inquire about my design services. As it turns out, he was in charge of the gardens and garden staff at the Lake Shrine. He told me that he’d liked what I had to say and, after my first meeting with him and some other people, I was hired as a consultant. I must say I’ve never worked with anyone who has a greener thumb – an almost magical touch with plants.

Before I get to my own efforts, a bit of history: The current site of the Self-Realization Fellowship Lake Shrine in Santa Ynez Canyon was originally used in the making of silent movies. In 1927, the site was graded in anticipation of development, but the project was cut short, leaving a basin in the center that eventually filled with water to create Lake Santa Ynez. This was and is the only spring-fed natural lake within the city limits of Los Angeles. 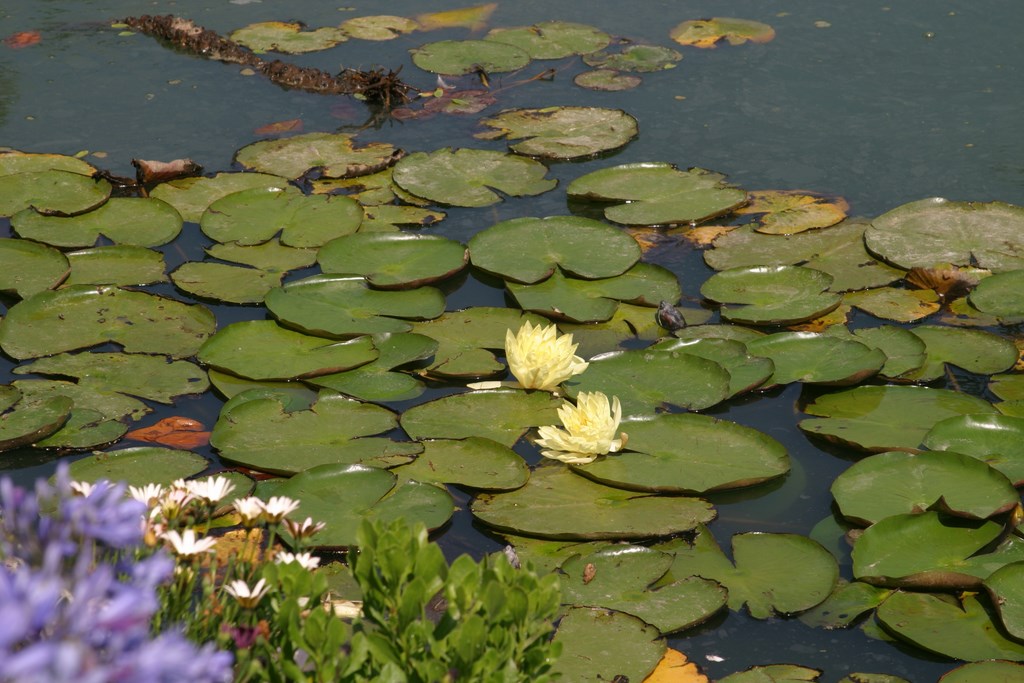 The site was purchased in 1940 by H. Everett McElroy, who turned it into a private paradise. He moved his houseboat – “Adeline” – from Lake Mead to Lake Santa Ynez and lived in it for a while before building a home on the property. That home, modeled on a small mill house, featured a two-and-a-half-ton, 15-foot water wheel that directed excess lake water to irrigation. Subsequently, he added a reproduction 16th-century Dutch windmill and a boat dock and landing, all of which are still there today.

The property was eventually purchased by an oil executive. Within a few years, he sold it to Paramahansa Yogananda, the spiritual leader of the Self-Realization Fellowship, the international society he founded in 1920. When he designated the site as a spiritual sanctuary in 1950, he also dedicated a portion of the grounds to the Gandhi World Peace Memorial, which contains a portion of Mahatma Gandhi’s ashes. (This is the only location known still to contain a portion of the Mahatma’s ashes.)

Paramahansa Yogananda first arrived in the United States in 1920 as India’s delegate to an international religious congress. During the next few years, he lectured throughout the country, reaching Los Angeles in 1924. In 1925, he established the international headquarters for the Self-Realization Fellowship atop Mt. Washington, overlooking downtown Los Angeles, and eventually wrote Autobiography of a Yogi, which has been translated into 21 languages and is used as a text and reference throughout the world. 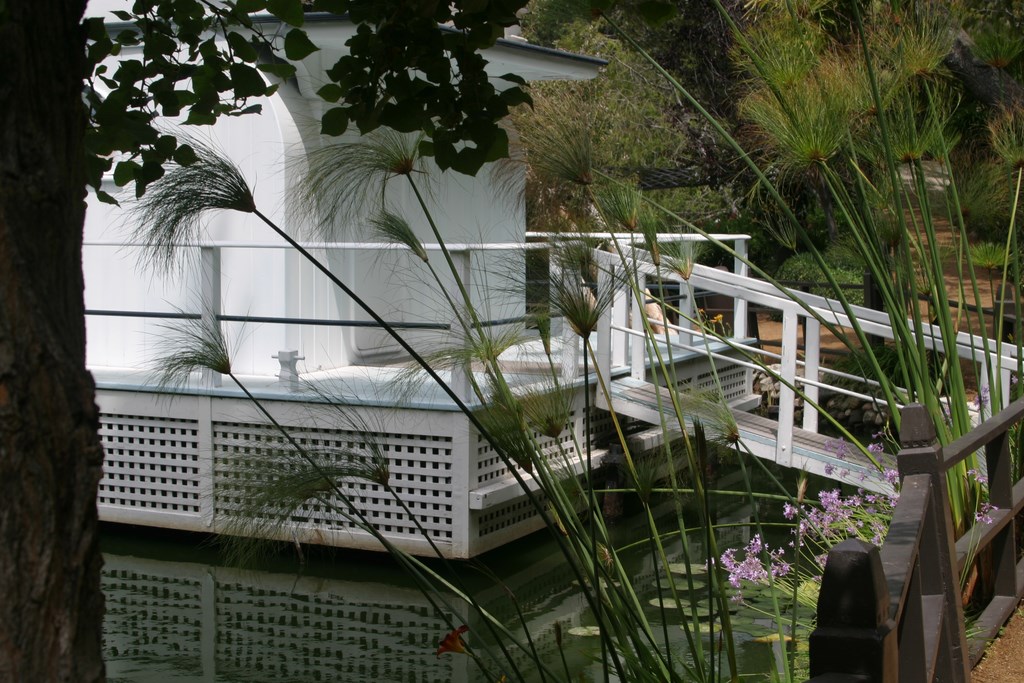 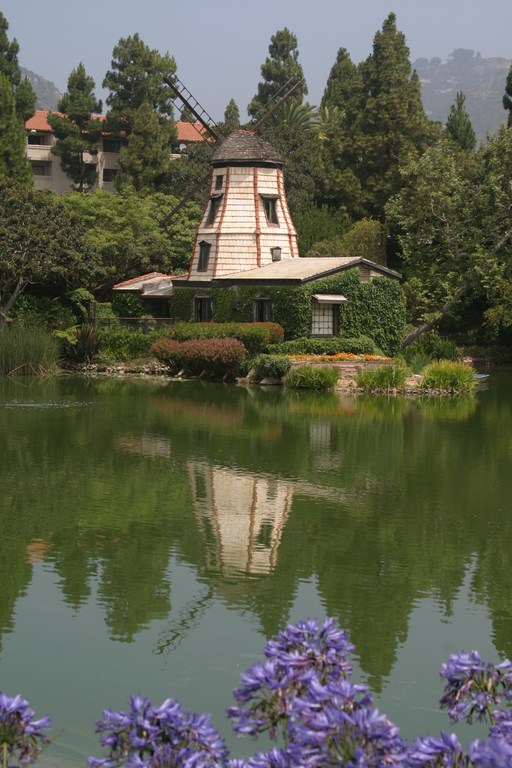 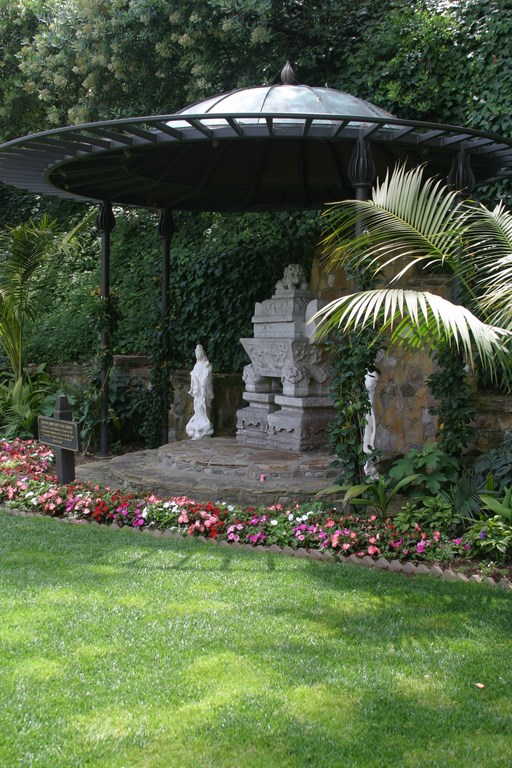 Whatever your own beliefs, I have the feeling we can all get behind the concepts of nonviolence, peace and love encapsulated in the Lake Shrine. The atmosphere created over the past half century is one of complete peace and serenity – the ideal setting for any form of mediation or contemplation.

The ten-acre site is home to breathtaking gardens and a variety of animals, including swans, ducks, turtles, koi (some seeming as big as the swans) and countless water plants. It’s said that many local doctors recommend visits to the shrine for patients in need of stress reduction or emotional healing, and I can believe it: No matter your mindset, there is something soothing at the Lake Shrine for everyone. 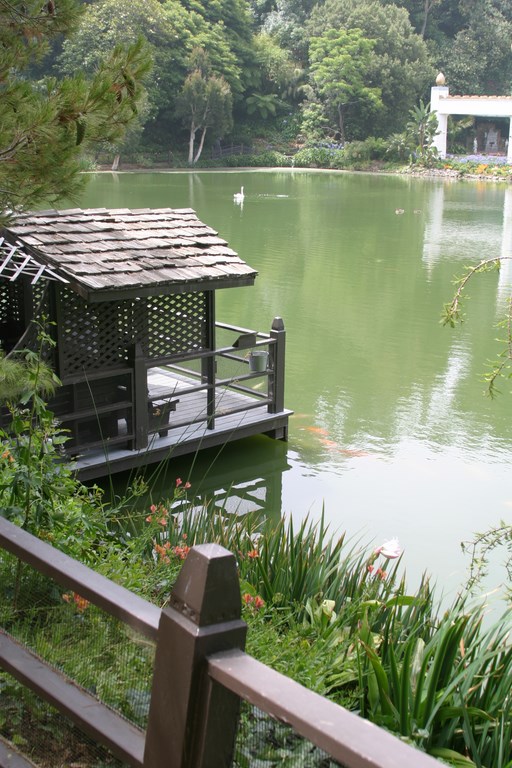 The deliberate, thoughtful creation of spaces designed for tranquility, meditation, prayer and healing is an ancient practice – and one that has caught on in a big way through the past few years on the grounds of hospitals, places of worship, arboretums and some public parks. The Lake Shrine is a venerable precursor to these modern facilities, something of an American prototype for such designs.

It’s a place that serves as a laboratory for the exploration of the almost magical combination of plants, water and spiritual artifacts. And given its location, surrounded by steep canyon walls so close to the Pacific Ocean, the Lake Shrine may well be the ultimate destination for this marriage of elements. My own involvement with this beautiful place is about providing consulting services for the Lake Shrine’s garden staff in maintaining the sense of serenity established over the years.

Within the ten-acre site are many smaller gardens established according to sun exposure and microclimate. There is, for example, the Japanese Garden with partial sun exposure and the perfect conditions for Japanese Maples and other traditional plantings. There’s also the Sunken Garden, one of the best full-shade gardens I’ve ever seen, and the gardens surrounding the Gandhi Memorial, host to a constant flow of visitors from around the world.

All of the gardens surround the lake and have been designed to take advantage of stunning views and settings in serenity-inducing ways. Many people take advantage of the interactive nature of the setting as they circle the lake on its undulating and meandering pathways. There’s a supply of food for the koi, and swans and ducks will sometimes swim up to greet you at various spots around the lake.

It’s an honor to be involved in maintaining and enhancing such a beautiful environment, and I have made it my goal to offer my planting-design sense while also working to smooth the transitions from one area to the next by weaving plantings together at the margins. We’re also focusing attention on the health of the trees surrounding the lake and have brought in an arborist to assure the ongoing survival of many of the large, old-growth trees. One of the major charms of the Lake Shrine is, after all, the sense of being enveloped in the gardens and the forest feeling the trees offer.

I’ve told the people I work with at the Lake Shrine that it’s funny how life brings you back around sometimes. I’ve been through a lot lately, and I see how appropriate it is that I’ve been drawn back to the Lake Shrine at this point in my life. I don’t question it – I’m just going to take advantage of this opportunity to work in the service of tranquility!