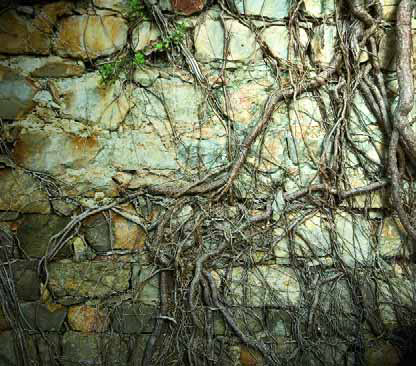 On just about any site, we run into hidden obstacles – everything from underground pipes or leftover debris from other construction to myriad other surprises – and many of them are easily dealt with either by removing the barriers or redirecting things around them.

But what happens when the obstacle is alive and growing and you can’t remove it or escape from it? In these situations, you have to do your research, get creative and, above all, take the matter seriously. Case in point is a garden I’m designing for a project with David Tisherman – the one discussed previously where I’m developing a white

As mentioned in that column, the property includes a large Ficus nitida hedge that rises to about 40 feet tall and in some places is 20 feet wide. When David, landscape contractor Pat Kirk and I first looked at the site, none of us were particularly disturbed by the imposing nature of the hedge, which provides much-needed privacy from surrounding homes and businesses and is just as important to the homeowners as the new pool and garden soon will be.

But being keenly aware of the damage Ficus roots notoriously cause, I brought up the possibility that they might create problems for us. The roots of these invasive plants can wreak havoc on landscapes, hardscape and pools, and I suggested that we needed to be proactive in this situation to prevent major problems down the line.

With only a cursory inspection, Pat and I found that at least one Ficus root had already reached out 25 feet from its trunk – and neither of us harbored any thought that only one of the plants was being so aggressive. I expressed my concern that the roots would most likely kill any lawn we planted by surfacing and drawing away the nutrients the grass would need to survive.

Of even greater concern, of course, was the damage the roots might do to the new pool and hardscape. The vessel was to have minimal coping, so irrigation water would easily migrate right up against the shell. Well known for breaking plumbing lines, it wouldn’t be long before the roots found their way inside the pool itself – I’ve seen it happen!

Once I raised a convincing alarm with David and Pat, I called an arborist friend of mine for advice. Without even seeing the hedge, he told me that its roots should not only be contained for the sake of the new hardscape features in the yard, but that the plants could potentially kill or destroy anything and everything in their roots’ way. 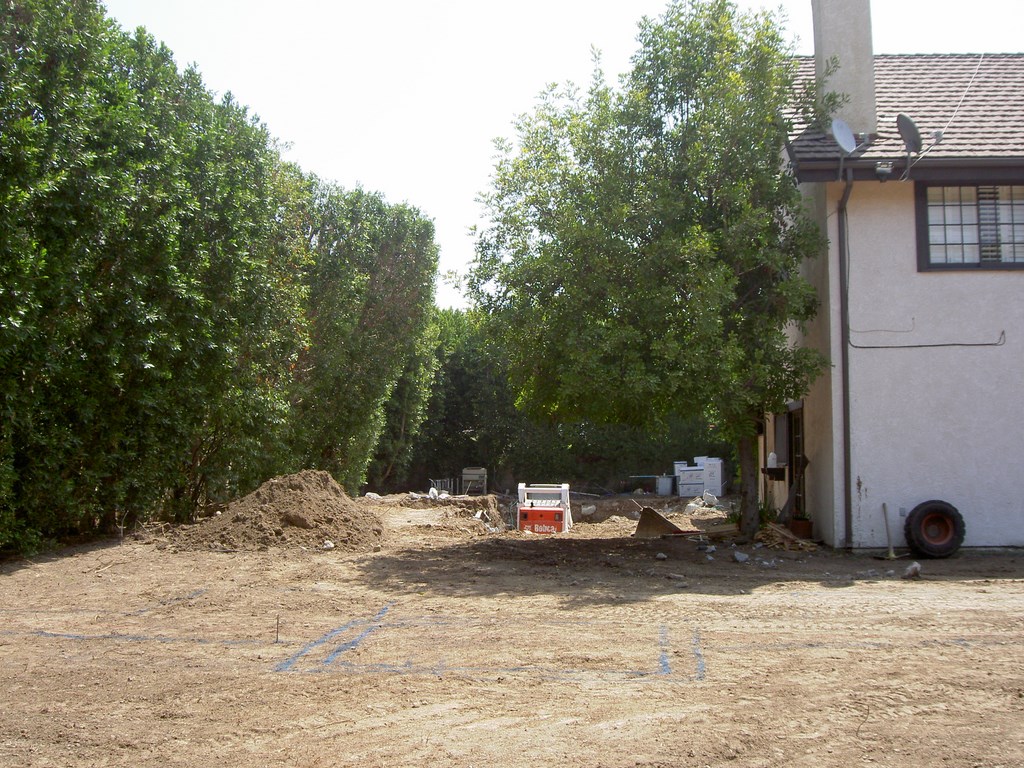 He further recommended that we call in another arborist who works with an airspade, a device that “digs” with a jet of pressurized air, clearing away dirt without harming roots. This arborist would clear a trench for us two feet deep and wide enough for installation of a root barrier, a process that would involve carefully cutting any roots that stretched through the trench in a manner that would not compromise the health of the trees. Once cleared, the trench was to be filled with concrete – the best barrier against future encroachment.

I’ve experienced many sites where clients have “throw in” Ficus hedges because they know they’ll grow and cover fast – and they think they’ll have time before invasiveness becomes an issue. In most cases, however, they forget about the pending problem and often come to regret it.

I was quite concerned about what we were up against. I’d nearly been sued once before because of plant invasiveness (in my case, it was bamboo that worked its way around the containment system we’d devised), so I was unwilling to take a chance here. The clients prized their hedge, so we needed to protect it from what we were doing at the same time we needed to protect all of our work from the hedge.

I hadn’t installed the hedge, so I was doubly concerned over the fact that it was so well established and so obviously out of control. There was no way that David, Pat or I wanted to be held accountable if anything happened to the hedge down the line, not to mention anything happening to the pool, hardscape or planting.

The second arborist surveyed the situation and confirmed the fact that we needed to contain the Ficus or face the potential for serious problems later. Immediately, we decided to cut a trench two feet deep and one foot wide into which we would build a reinforced-concrete root barrier.

The arborist also suggested that we put a full-length PVC root barrier on the Ficus side of the trench before we pumped in the concrete, as the PVC would create a barrier between the moist/cold concrete (attractive to roots) and minimize the prospect of the roots doing the barrier any damage. The added cost of the PVC barrier was negligible and, we felt, worth the benefit as yet another precaution. 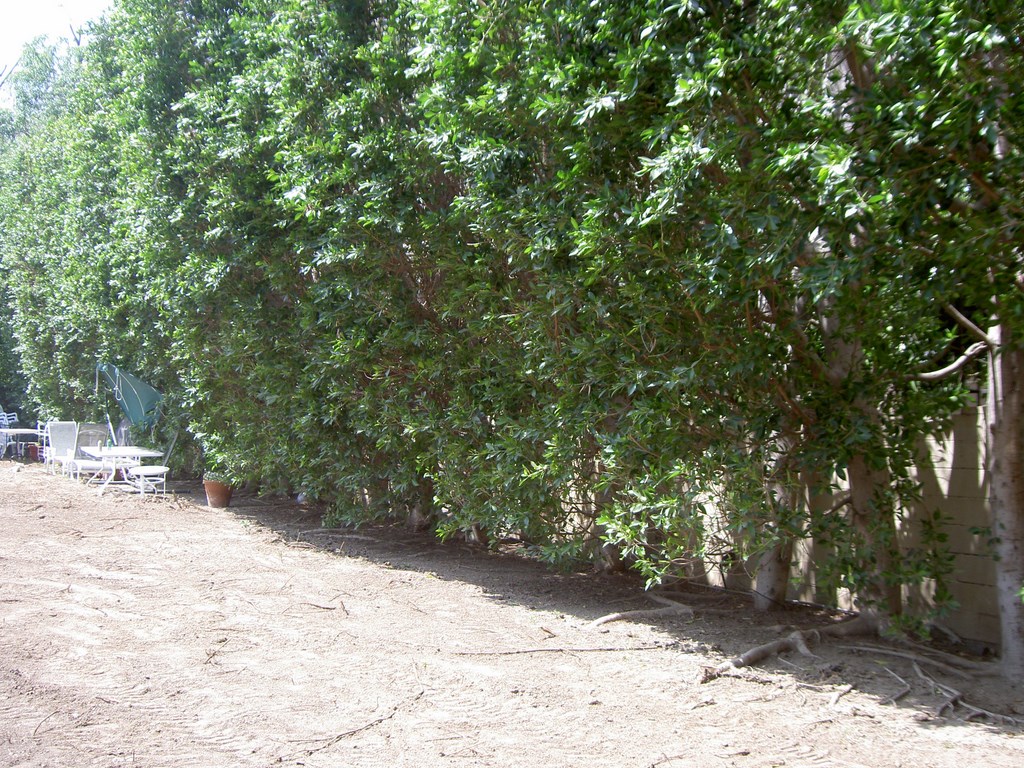 When all was said and done, we reduced the width of the trench to seven inches, leaving enough room for the PVC root barrier, the rebar and enough concrete to ensure adequate resistance to the pressure that might be applied by large roots. This reduction in the size of the trench also enabled us to save the clients some money, as less concrete was needed.

Although the homeowners were grateful for this price reduction, they had a not-uncommon reaction to the work we were doing: As they put it, it still seemed like they were spending a lot of money on something they were never going to see.

As I explained to them, this is a case where what you don’t see is exactly the thing that is keeping everything you do see from harm. Without the root barrier, the Ficus hedge would eventually destroy everything in its path.

This is, by the way, exactly the same sort of conversation David has with clients when he puts tons of steel and concrete under pools to keep them from sliding down hillsides. It’s also the discussion that occurs with quotes for irrigation systems: People won’t see the system or its components, but they surely will see what happens if things aren’t working or the system proves to be improper or inadequate.

The point is, clients need to understand that they will not always see everything they are paying for. The value of the (invisible) root barrier is its assurance that the visual they’ll see the day we walk off the property will stay in place and not be disturbed by wayward tree roots in the foreseeable future.

I’m a true believer in root barriers and often use them to keep roots from creeping into neighboring yards. Many types are available, and I’ve used most of them – PVC and concrete as well as the containers in which the plants arrive.

To me, this is a type of discussion that should take place on every job site, especially when existing invasive plants are being kept as part of a new design. I generally try to convince my clients to replace these plants, but that’s not always possible for reasons of money or time. (That was certainly true in this case, where waiting for any new hedge to grow to 40 feet high and 20 feet thick would have been out of the question.)

My main point here is that you need to assess the threat posed by existing plant material or any new plants you’re installing and take appropriate steps to prevent future problems. It’s our job as professionals to think about these issues before they become a problem rather than being forced to take action (or get hailed into court) once disaster strikes.

In this situation, the root barrier we’ve installed will enable us to plant a large lawn and set an abundance of hardscape features without fearing they will be destroyed down the line. Only time will tell how well this solution has worked, but I’m more than confident that what we’ve done has averted what might have been a “redo” in just a few short years.