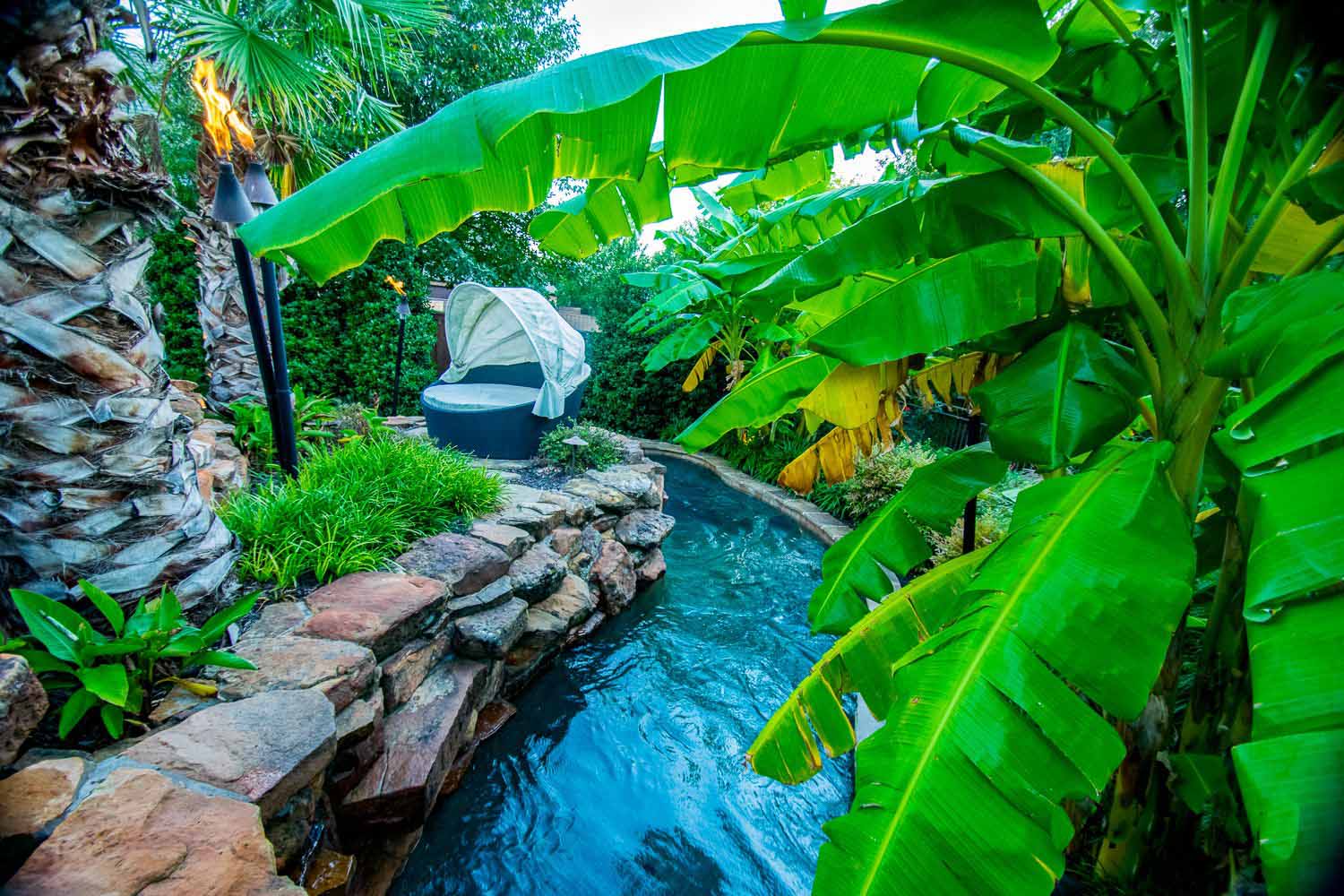 Animating water in the form of a lazy river inspires many prospective pool owners, explains Mike Farley. But the cost and level of difficulty quickly narrow the opportunities, both for clients concerned with affordability and builders who need an important set of design and technical skills.

Over the past 10 years or so, I’ve become something of a lazy river specialist. I’ve designed 20, give or take a couple; four have been built with five and six on the way. The one I did first that started me down this path was widely published in print and online, drawing a surprising level of attention from all sorts of different people far and wide. Images of the project went viral and my phone has been ringing ever since.

My first lazy river project was both impressive and challenging. We used almost every available square inch of space to create a large lazy river in an average-sized backyard. The customer wanted a lazy river in a setting that looks like Maui and that’s essentially what he now has and I understand has enjoyed it immensely.

Apparently, the finished project was so appealing it’s inspired other homeowners to want the same, at least until they dig a little deeper. People love the idea of floating around in their own river. They love the idea of having a waterpark ride in the their backyard that will appeal to their kids and grandkids. There’s just something about these pools that really hooks some homeowners – until they see the price tag, that is. 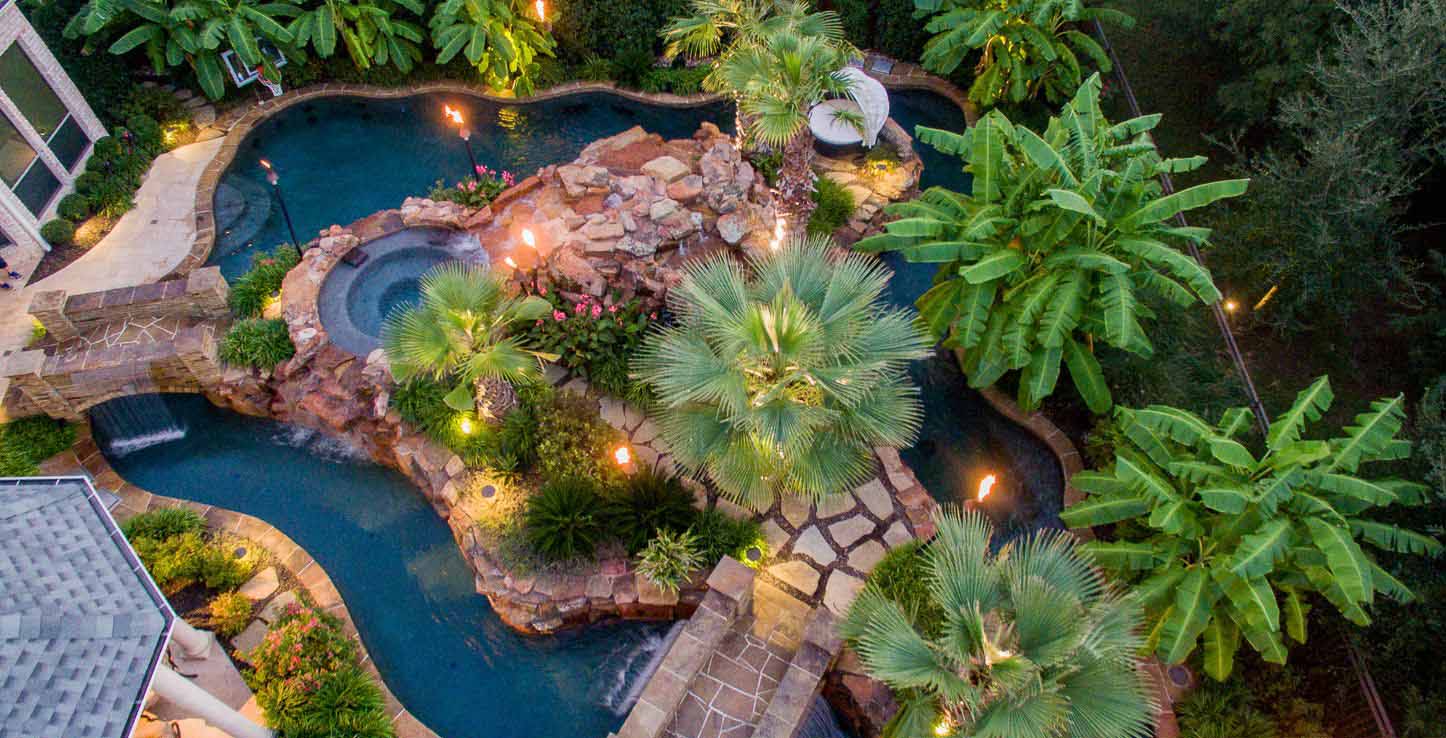 Lazy Rivers prompt some people to dream. Some want it enough to go down the design path; but when we get into the process and start talking about price, that’s when most decide they can live without one.

It’s not uncommon for someone to come into the process thinking that it can be for a couple hundred thousand dollars, which does sound like a lot of money for most people. In reality, however, that’s not even close to what it takes to create a full-blown lazy river, not by a long shot.

I won’t quote prices, for each project is different; but, I will offer that it’s not unusual for a lazy river to be three or four times the cost of a pool that’s comparable in terms of size. I get a lazy-river call every other week on average. At least half of them drop off immediately when I let them know how expensive it will be. There’s a smaller percentage that want to go ahead with the design, then there’s the rare customer who decides to build it. By the time we get to that point, they are fully aware of the reasons why these vessels are so expensive.

TRICKS OF THE TRADE

I never cut corners, on any aspect of the system. These pools are so tricky you risk costly failure if it’s not done correctly. The following considerations account for the outsized expense and why these pools are not for beginners.

q Big, long and skinny: Starting with the vessel itself, lazy rivers are necessarily big. In fact, in some ways, the bigger the pool is the better, because you can make a longer ride with more variety. But consider that you’re basically taking a long piece of spaghetti and wrapping it around and hoping it doesn’t break off. In other words, these things must have special structural engineering, which can result in thick walls and heavy-duty steel reinforcement so it’s strong enough to exist in the ground. A lazy river is usually built like a bunker. 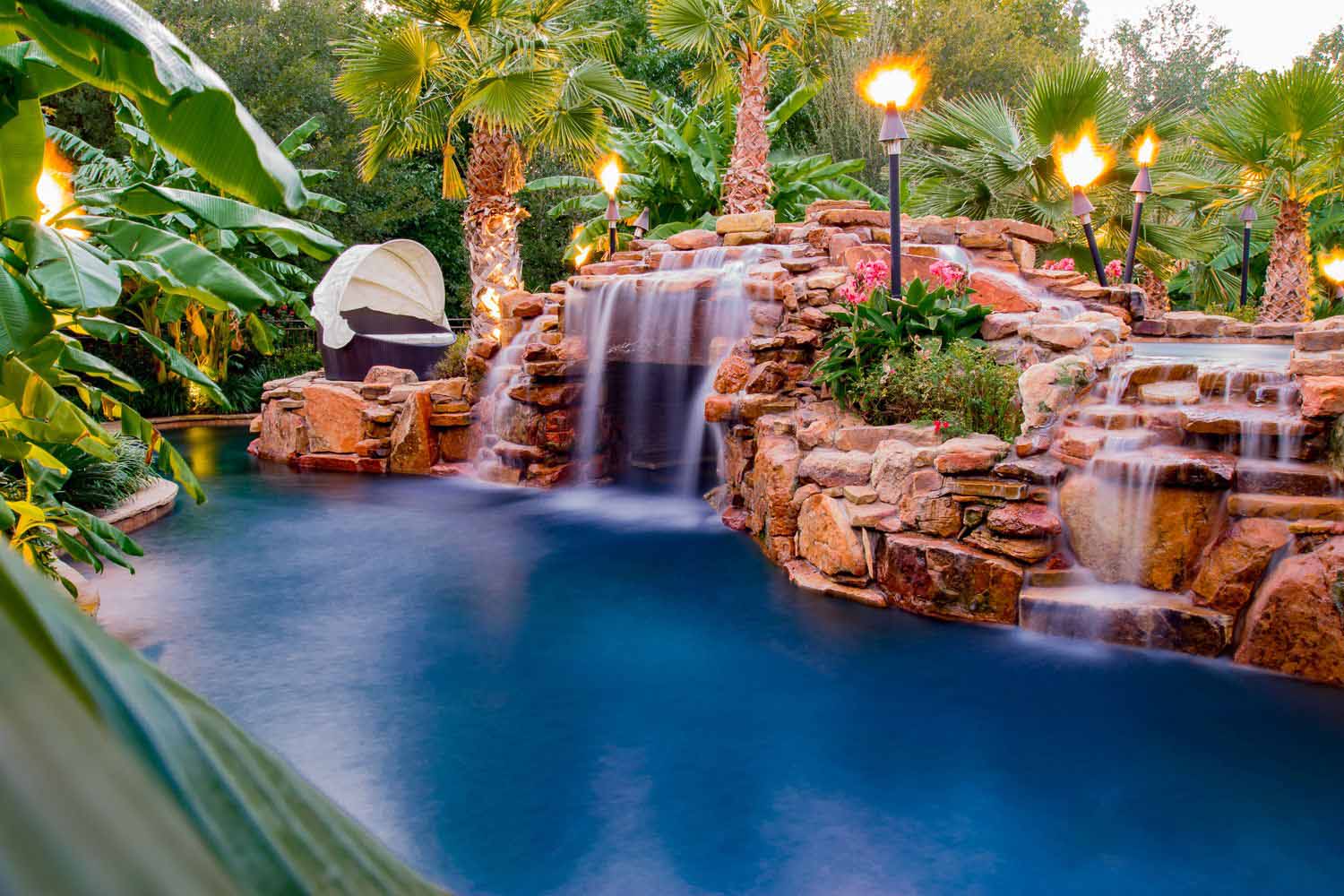 q Inside/outside walls: First, there’s the dramatically increased linear footage of the pool walls. There’s simply a lot more pool to build because you have inside and outside walls. You have the outside of the pool and the inside wall of the trough that forms the river, and also serves as the perimeter of the island around which the lazy river flows. Right away you run into the question of whether you form the inside wall, or use the earth of the island, which may or may not be suitable. If you must form the inside walls, then you have the challenge of back filling to recreate the island.

q The island: Homeowners very often want to turn the island encircled by the river into its own destination. That might include a spa, rock work, decking and plantings. That all sounds great, but working on an island is an expensive challenge. You have to have plumbing and electrical. If there’s a gunite spa, then you’re building an entire vessel on the island. And while we’re at it, let’s throw in gas lines for fire features and low-voltage wiring for a sound system and spa-side controls.There are some different versions that can move the wall linear footage up or down, but there’s no escaping the fact that lazy rivers require more walls than a typical pool with the same footprint.

The question is, how do we access the island for all the necessary construction stages? And, what can the island reasonably accommodate?

Even for something as simple as landscaping, it requires irrigation lines and drainage, which is surprisingly difficult because sometimes there’s no way to set up a gravity line that runs beneath the pool. So something as simple as watering the plants and providing drainage to the flowerbeds can represent a huge investment. 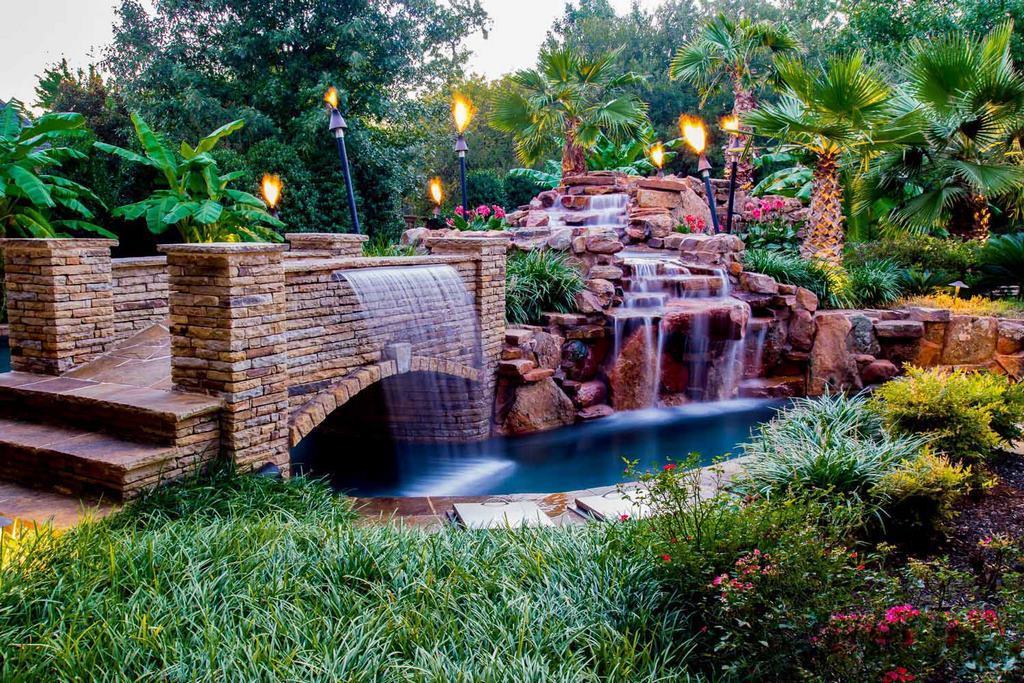 That’s why many islands don’t have much in the way of landscaping. Some have artificial turf and plantings, or they simply pave the whole thing.

From a design standpoint, you have to consider how the island looks from all the various viewpoints. That means you will very likely be using expensive finish materials, which might include natural stone, tile or quality artificial rock work, waterfalls, grottos or even misting systems.

q The Bridge: Almost all lazy rivers have islands, which mean you need a bridge. Oftentimes, these bridges have some kind of interesting design that might include a rain curtain effect or LED lighting.

q Pumping system: There’s no skirting the fact that the pump systems are very expensive and they can difficult to install. You’re dealing with massive plumbing and you almost always have to upgrade the electrical service to the house, because most subpanels don’t accommodate enough amperage to run the system. (On my first lazy-river project, the power company had to upgrade the service to the transformer. That was an expensive process, to say the least.) Most of the time, you can make it work with one pump system, but in larger rivers, you do need two (I’ve yet to do one with three) so again, you’re dramatically increasing cost.

q Entry/egress: Most rivers need more than one place where you get in and get out. These areas take up space because they need to be outside the footprint of the river. You don’t want steps extending into the flow of the river. That would disrupt the flow and provide an obstacle people could run into when they’re floating by. You must carefully plan for appropriate and attractive entry and egress points.

q In-floor cleaning: I think all lazy river pools should have in-floor cleaning systems. Because the rivers are long, skinny troughs, usually not more than six-feet wide, with all sorts of turns and contours, automatic pool cleaners are notoriously ineffective cleaning them. Lazy rivers are extraordinarily difficult to manually vacuum and brush, as well, so you really do need an in-floor cleaning system, which again can be extremely expensive, and they add a layer of difficulty simply figuring out where to put all the plumbing.

q Tight lights: Because of the long and narrow vessel shape, lighting is another significant challenge, often requiring many times the number of fixtures you need in a typical swimming pool.

Despite all the design and construction challenges, nothing beats giving the homeowner the keys to his own personal waterpark ride. For those lucky few who dream and do, a lazy river becomes the centerpiece in the backyard and in the hearts and minds of all who take a ride.

Mike Farleyhas 30-plus years of experience creating custom pools and landscapes. He has designed more than 750 unique projects that have been built to date, winning numerous awards in both California and Texas. He is widely published and is one of the watershaping industry’s most experienced and sought-after instructors.