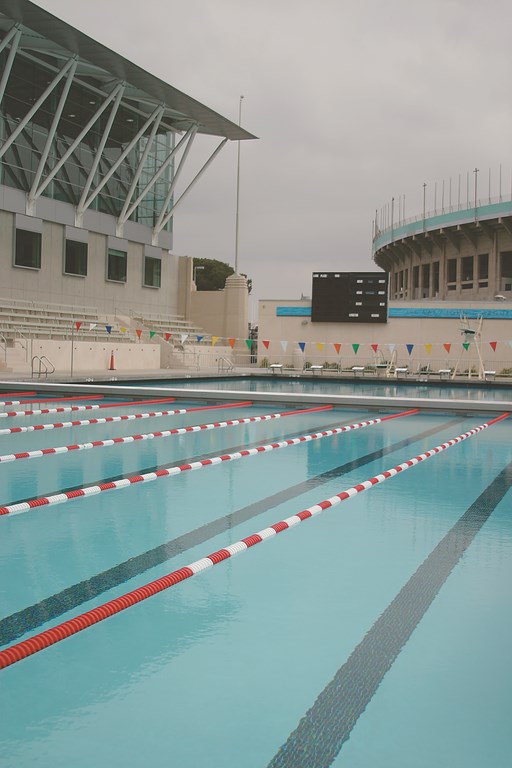 It may have been in the heart of the depression, but 1932 was a good year for American swimmers: The Olympic Games in Los Angeles saw Clarence “Buster” Crabbe win gold in the 400-meter freestyle in the then-world-record time of 4:48.2 and Helene Madison win gold medals in both the 100- and 400-meter freestyle events. U.S. swimmers claimed nine medals in all, in many cases besting swimmers from the powerful and heavily favored Japanese team.

The competition was held in an eight lane, 50-meter pool positioned quite literally in the shadow of the Los Angeles Memorial Coliseum. Just as the names and records of those swimmers have faded across 70-plus years, so too had the swimming pool and its companion recreation pool. Although they had remained in near-continuous use for generations, the old vessels were supplanted when a modern swimming pool complex opened on the nearby campus of the University of Southern California in anticipation of the 1984 Los Angeles Olympiad.

Early in 2003, we at Rowley International of Palos Verdes Estates, Calif., were asked to renovate the old facility’s two swimming pools. The City of Los Angeles, along with support from the Amateur Athletic Federation (AAF), set a goal that didn’t involve returning the facility to its role as a high-profile venue for competition. While that was part of the program, what all parties primarily wanted was a multi-purpose community facility that would serve as a summertime recreational hub for the thousands of inner-city children and families living in the area.

When first conceived for the games back in the late 1920s, the facility was state of the art in every respect and had been designed to accommodate the world’s highest-profile swimming events.

There were wonderful innovations, including waist-deep channels built into the deck alongside the pool to allow photographers and reporters up-close views of the athletes in action. There were wonderful aesthetics as well, from the wooden diving tower to the bleachers with their Grecian-style trellises overhead. The facility also included an enormous semi-circular pool – a shallow vessel evidencing the fact that the original designers saw beyond the Olympics to the facility’s future role as a community aquatics center.

By the time we became involved, many of those features were long gone and the facility had undergone numerous, apparently makeshift renovations. Both pools could still be used, but their operation was limited by band-aid approaches that had let things slide to the point of dysfunction. 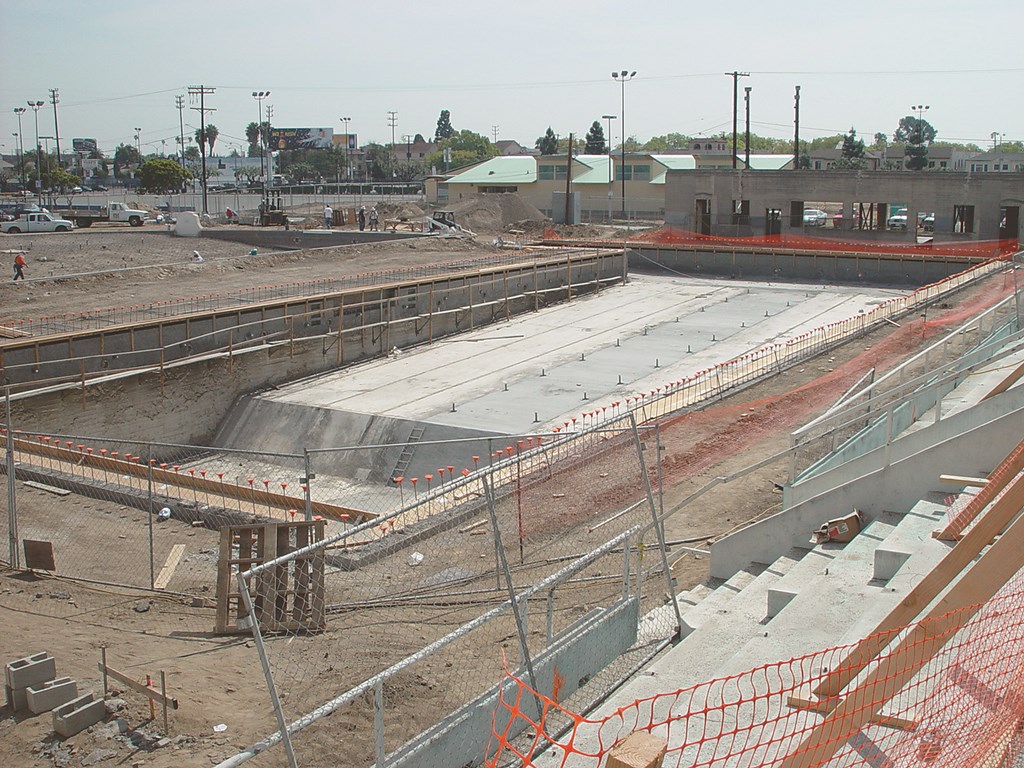 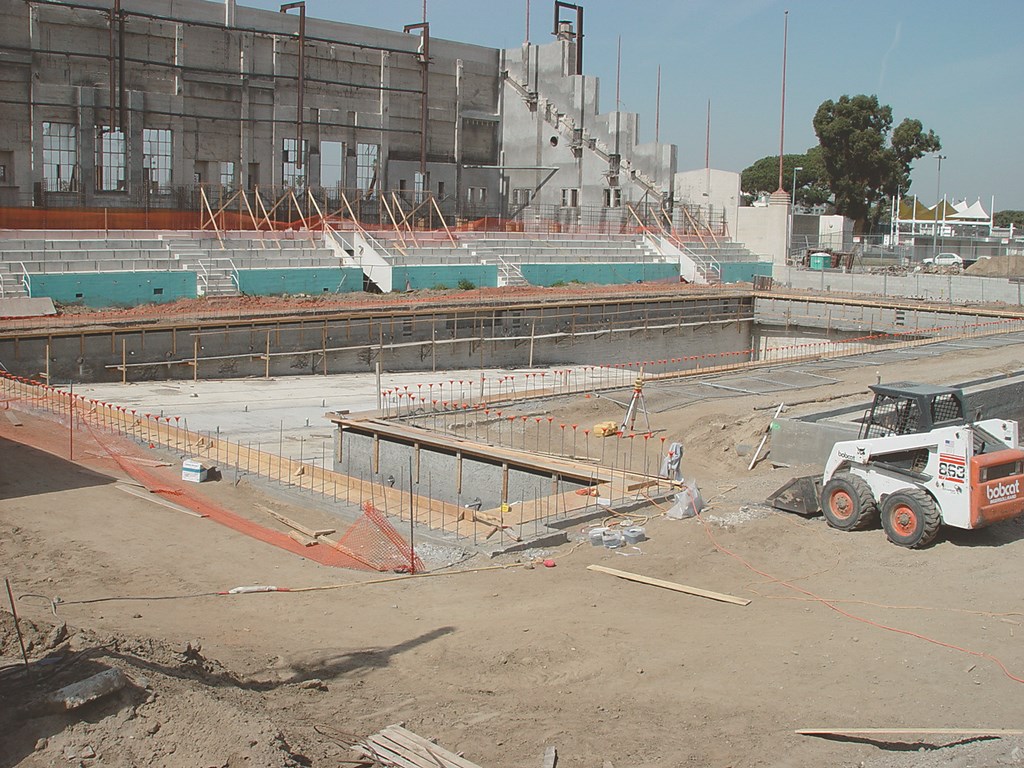 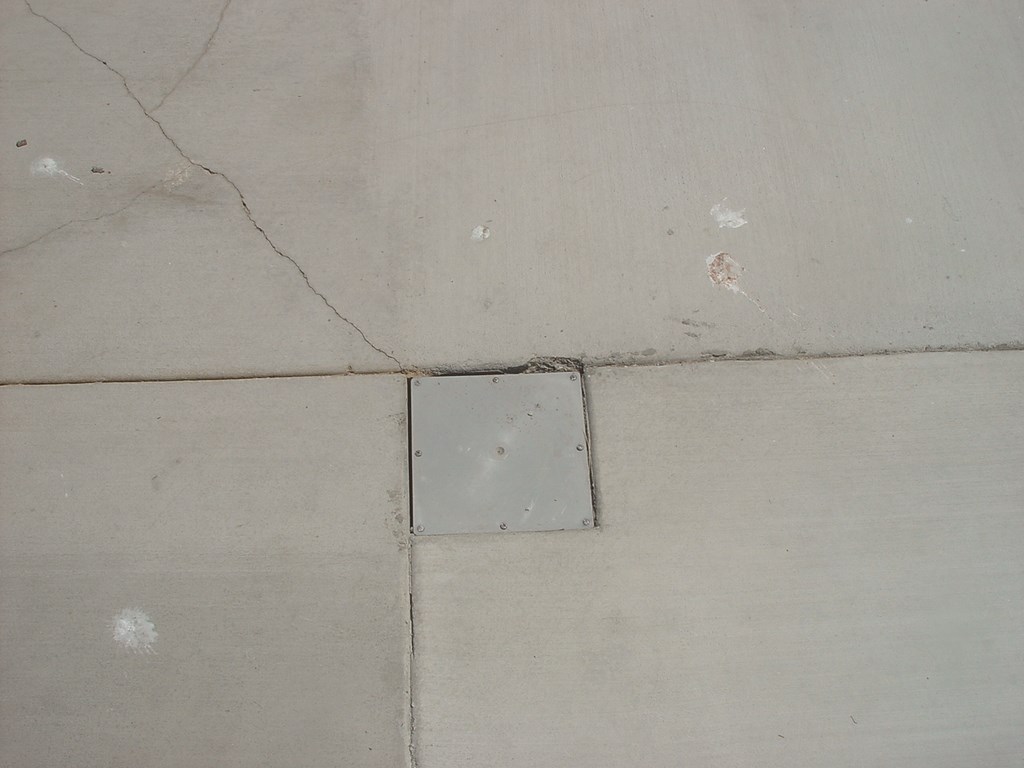 A full restoration awaited the fundraising efforts of the Los Angeles Historical Society. Because the pools were listed as historic monuments, there was a strong sense that whatever work was to be done had to retain as much of the original detail as possible while still bringing the racing pool up to contemporary competition standards.

This became something of a balancing act, to say the least, because what was needed was so extensive. We had to rework the entire plumbing system for the 50-meter pool, for example, to include modern-style, in-floor return outlets and a new concrete gutter system, which meant removing the top four feet of the shell and cutting a big trench down the center of the floor for the length of the pool.

Furthermore, we’d been asked to add a movable bulkhead to the mix, which meant we had to knock out the entire end wall on one side and extend the shell by three feet to maintain the 50-meter length needed for competition. We also had to raise the floor in the shallow end to the 4-1/2-foot level required by international competitive standards – and extend that end of the pool into an L-shape for easier access.

There was so much to be done that we had serious conversations about demolishing the existing facility entirely and starting over from scratch in the same location. This would probably have worked out to be comparable on a dollar-for-dollar basis, but the various groups involved with the project remained steadfast in their commitment to renovating what was there for historical purposes.

Once the final decision was made to renovate rather than replace, the design team’s members focused on preserving what was left of the original aesthetic elements – specifically the façade for the bleacher structure and the styling of the pool deck and of the semi-circular recreation pool. Fortunately, all of these features were well documented in contemporary photographs.

Of course, we had an advantage in our work on the 50-meter pool in that competition pools haven’t changed much in appearance in the past 75 years: They’re still large rectangles in white plaster with black-tile lane markers. Beyond that, however, we were extremely sensitive to the fact that the final appearance of the rehabilitated pool couldn’t be too far from the original. 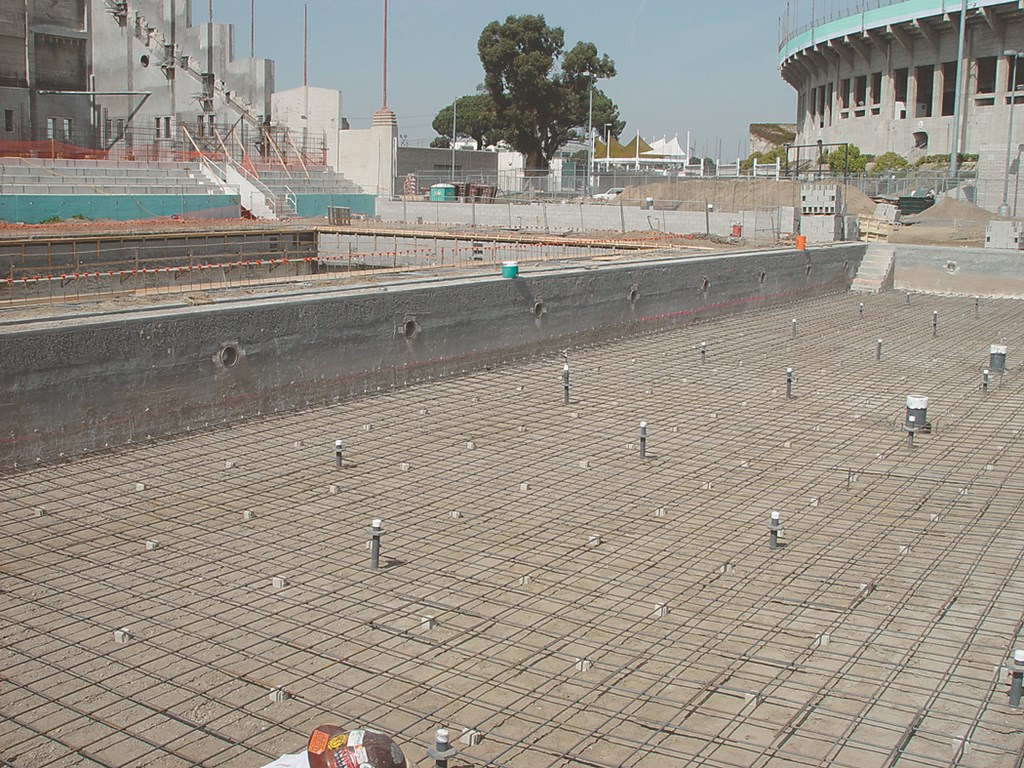 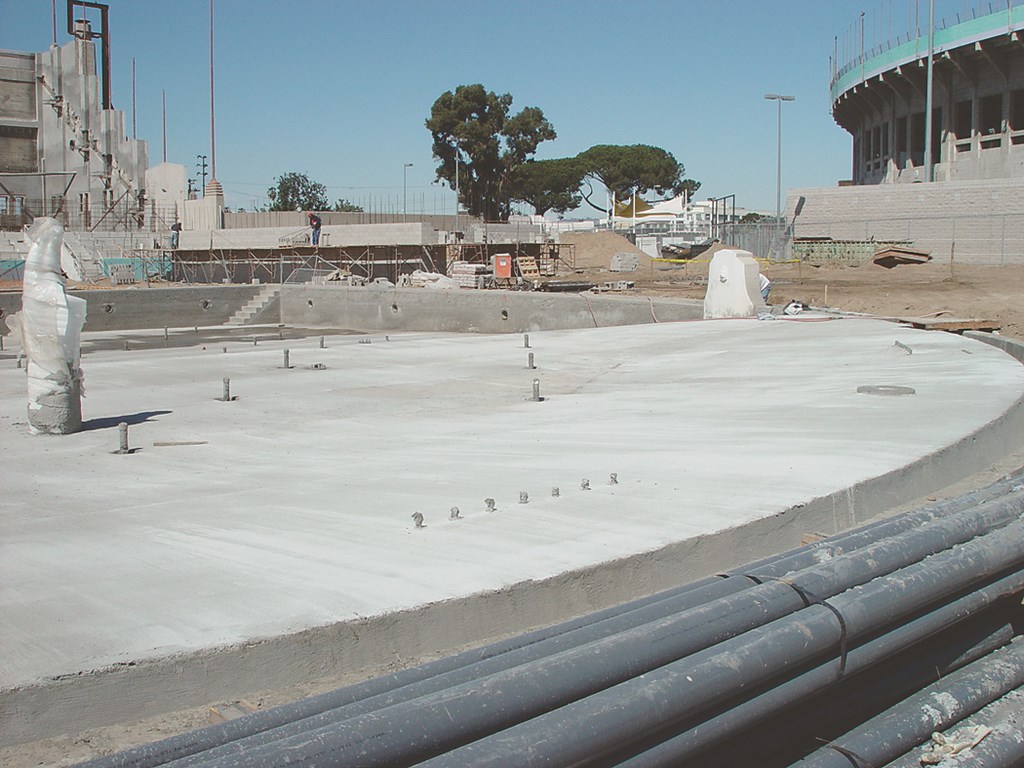 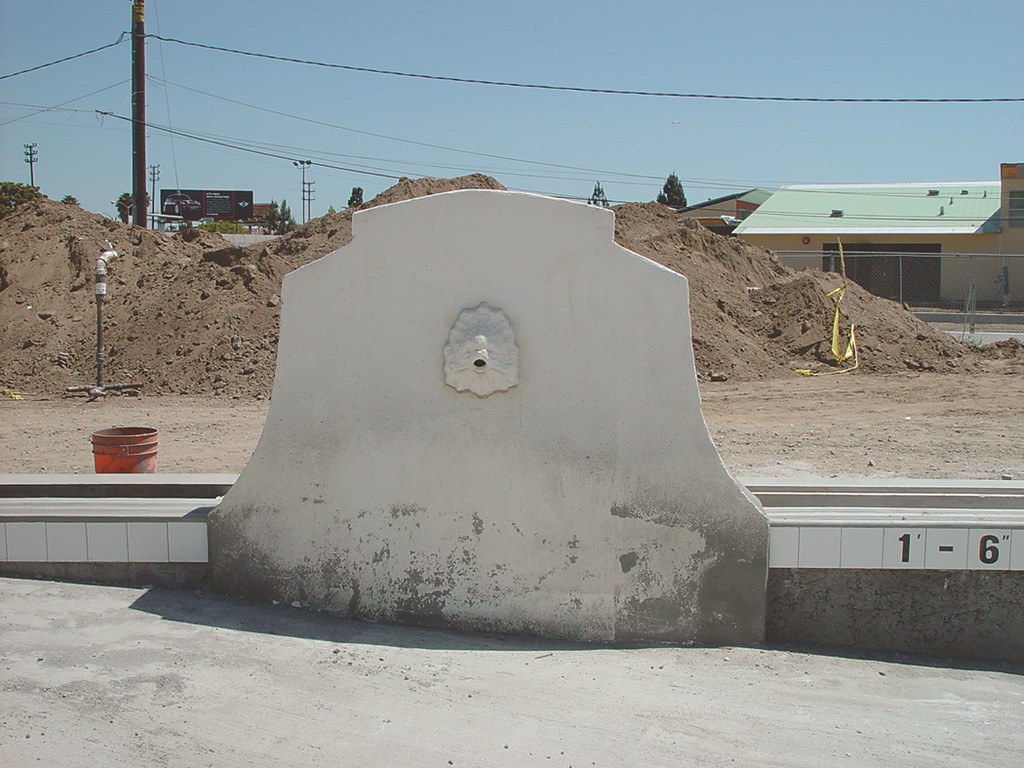 This added some complexity to our work on the new gutter system. The original vessel had been rigged with what was called a “sputum gutter” at the waterline – a small, tiled slot plumbed directly to waste. We needed to form, pour, cure and tile a modern gutter system measuring 18 by 24 inches in its place (hence the need to cut away the top of the old vessel), and then cantilever a new deck over its top to conceal the gutter from view and restore the original look.

As part of the same process, we had to set up the new deck with the appearance of the original, which had been made with shallow grooves to ensure safe footing. This was not as easy as it might have seemed: In fact, the contractor had to develop a special set of trowels to recreate the precise deck pattern entirely by hand. Working that way may have been standard practice for Depression-era concrete finishers, but this was quite foreign to practitioners of modern techniques.

For all of our careful work with the pools, however, the heaviest burdens when it came to historic accuracy and appearance were shouldered by the architect and general contractor in redesigning the bleacher section to include an indoor health club and community center behind and below portions of the old bleachers while retaining the structure’s original façade.

This was a massive undertaking – and well beyond our concerns as watershapers for the project.

The recreation pool – a big semi-circle with a 200-foot diameter and depths ranging from three to four feet – must have seemed quite the modern marvel when it opened before the 1932 Olympic Games.

By the time we arrived, it was a different story. And because we didn’t have any specific competition standards to meet as we did with the 50-meter pool, we had much more flexibility in bringing it back up to date. 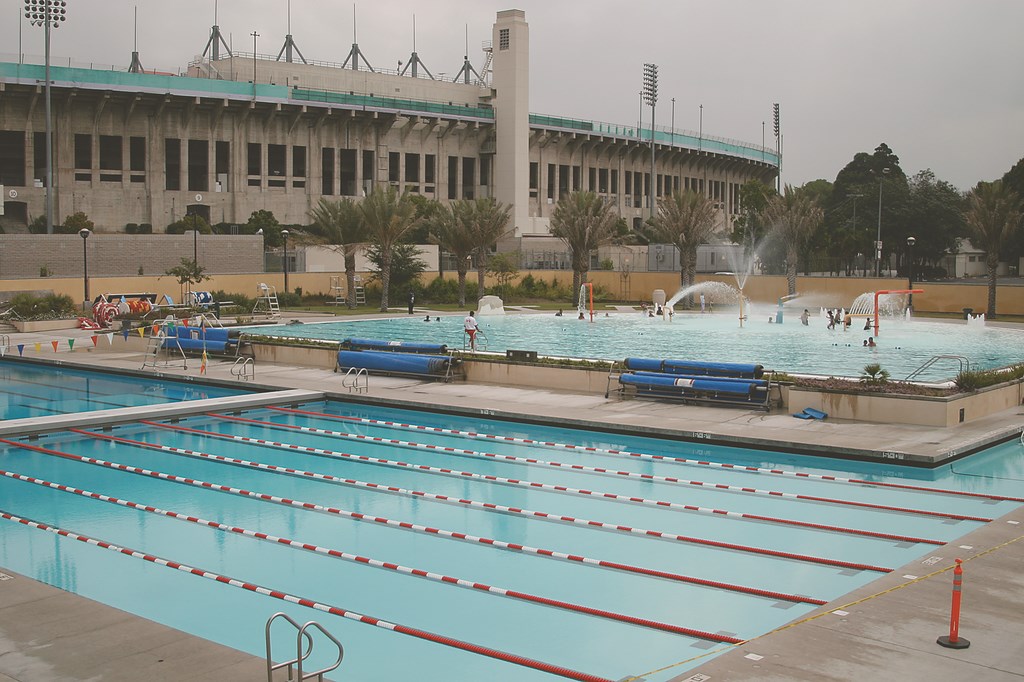 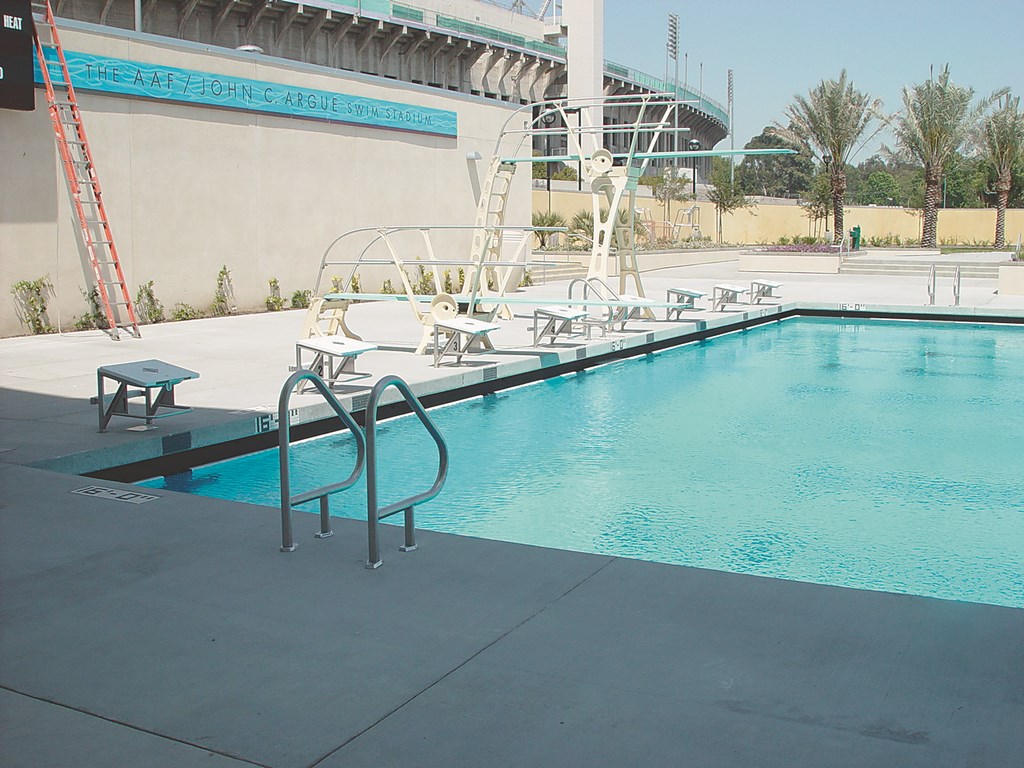 In a curious nod to history, the Los Angeles Historical Society insisted that we retain the original sputum gutters. Thus, if it were ever deemed necessary or desirable to do so at a later date, the pool could readily be returned to its original design. So we filled the gutters with a cement slurry that could easily be removed later on, then plastered and tiled over them in reworking the edge treatment.

For the new gutter system, we trenched around the outside of the existing structure to set up a deck-level system in which the water now flows over the top of the original shell. We also added four tiled warm-up lanes for use by competitive swimmers in preparing for action in the other pool.

To make some areas of the pool a bit shallower, we built up the floor along the arc of the semi-circle, creating a broad shelf with a water depth of 18 inches. Within this shallower space are now included eight sets of interactive waterfeatures.

This is probably the single most prominent change we made to the overall look of either pool, but there’s nothing terribly dramatic in the array of sprays, falls and control mechanisms we added – basically for the amusement of small children.

When the facility re-opened, it was particularly interesting to see kids interact with these play structures. For the first little while, they didn’t pick up on the fact that they could manipulate the valves and levers to change flows to the jets, but it wasn’t long before they began to get the idea that they could have all sorts of fun spraying and surprising each other. Now the play pool is a hive of enthusiastic activity.

Beyond the specific aesthetic concerns, much of the work we did was not unusual for the renovation of a large aquatic facility – cutting concrete, drilling, doweling, adding new steel, setting new plumbing and electrical lines and, finally, adding new shotcrete to restore shells to working trim.

The fact that the work was routine, however, didn’t relieve us of a great responsibility for care and attention to detail. A tremendous amount of time and energy, for example, went into preparing and executing the structural plan for tying the existing portions of shell into the new gutter system and flooring with vast amounts of steel doweled into the rock-hard existing shells. 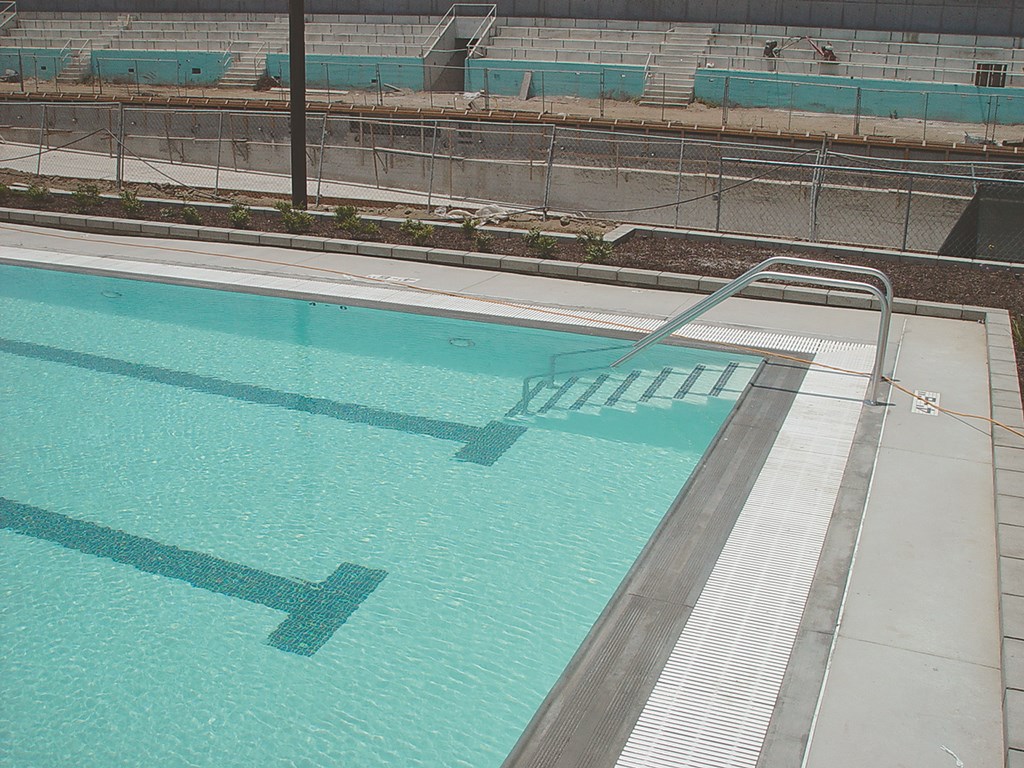 In these places, we used a rich concrete mix with large aggregate and a high cement-to-water ratio to minimize cracking in areas where new material conjoined with old. We operated with the assistance of the structural engineers at Martin and HBL – one of the best firms in the business – and left absolutely nothing to chance.

That same devotion to high standards reached into the new equipment set. The old pools were designed for ten-to-12-hour turnover rates and we needed to bring them up to today’s six-hour requirement, which meant increasing the size of the pipes throughout the system as well as increasing filtration capacities.

One of the things we had going for us is that the new high-rate sand filters are less than a third the size of the filters we replaced. (The original filters, by the way, were vacuum sand filters in filter pits. Those we replaced were the rapid sand filters we found when we arrived.)

The new system brings the pool up to the current state of the art: The equipment room now features stacking Stark high-rate sand filters (made by Paragon Aquatics, LaGrangeville, N.Y.) and a completely automated chemical control system by USFilter/Stranco (Bradley, Ill.) that adds bleach, acid and CO2 for complete sanitizing and pH control. The 50-meter pool has a single pump (Paco Pumps, Brookshire, Texas), while the recreation pool has a single circulation pump along with two smaller pumps (all by Paco Pumps) that drive the waterfeatures.

Once the work actually started, everything went well despite a few surprises (one of which is described in the sidebar just above). As is the case with most large renovation projects, the site looked like a war zone most of the time and there was some concern on the part of those most interested in “preserving” the site that our activities may have gone too far.

But once the shell was completed and the new gutter hidden beneath the painstakingly restored decks, it’s actually difficult to tell we’d even been there – just as we all intended.

Ron J. Bravo is project director for Rowley International, an aquatic design and engineering firm based in Palos Verdes Estates, Calif. With 15 years of diverse project experience, Bravo is an expert in pool renovation and the mechanical aspects of pool design and construction and is also involved in the research and development of new products. His key projects have included large aquatic facilities at California Polytechnic University, San Luis Obispo; West Boise YMCA, Boise, Idaho; and The United States Military Academy, West Point, N.Y.