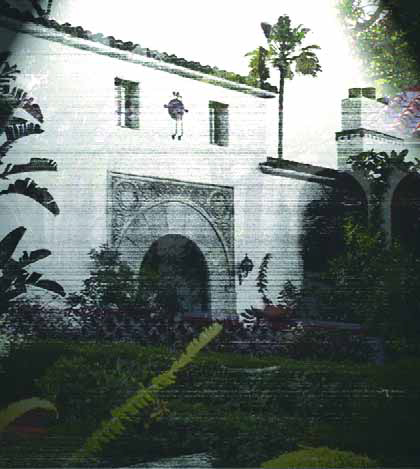 Here in America, our idea of history goes back only so far.

That’s particularly true in southern California, where “older” architecture is anything before about 1960 and very few structures date to a time before 1920. But it’s also the case for most of the rest of the country with reference to architecture: We don’t have the “ancient” structures that still set the tone and architectural vocabulary the way they do in Europe, Asia and other places.

For those who prefer modern or contemporary styles, this lack of history may be irrelevant. For those who feel an affinity to older styles, however, there’s a tendency to cringe every time an older house is torn down to make way for something new.

To be sure, our building codes encourage teardowns by making preservation and restoration close to impossible, but I’m always happy to see or participate in projects where the client wants to preserve or restore a home in a style that reminds us of another place and time.

I’m lucky at the moment to be working on a project that epitomizes the desire to preserve what little we have left in Los Angeles by way of homes that were built here in the early part of the 20th Century. It’s a Spanish Colonial home, one with a character that emanates from its setting, the architecture and the older-growth plantings that surround it. (Once again, “older growth” is a relative thing!)

The homeowners want to preserve the style and emotion of the architecture while infusing it with a functional practicality that fits their needs as a modern family with two young boys. To maintain as much of that heritage as possible while removing features that have modified it through the past several decades, they’ve stored or protected the original doors, hardware, floors and other key elements of the architecture.

They carried the same attitude outdoors. Where most people would simply plow down any plantings around the house as part of such an extensive restoration, we have all agreed to extend the preservation philosophy to include many of the plants on the property. Old roses, hydrangeas, tree ferns and old drifts of clivia have been potted up and placed in a “temporary nursery” until they can be reintroduced, while large trees have been protected and will be preserved as the “bones” of the revitalized landscape.

These are, in other words, exceptional clients. Most would say it’s not worth the money or effort involved in saving these plants. From my perspective (and theirs), however, by destroying these plants, you detract from the unique character of the house as it was intended and originally built.

In entering the process, we recognized, of course, that “preservation” and “restoration” are terms open to broad interpretation. It’s also a fact that architectural styles are subject to wide variation and that there’s nowhere to go to find strict guidelines that define them.

We were stepping into a realm where everyone can have a different opinion, and that’s generally not unusual turf for a designer.

Case in point is a project I worked on about ten years ago – another Spanish Colonial-style home in the Pan Pacific Park section of Los Angeles. This area had been designated a Historic Preservation Zone, which means mostly that a group of people oversee architectural modifications within the specified neighborhood.

Before I came onto the job, the homeowners had painted the house a deep terra cotta color with the trim a forest green. Most of the houses in the area were in light, pastel tones, so the neighbors, outraged by the color choice, contacted the Historic Preservation Board to make their feelings known.

The neighbors believed the house color was not in keeping with the feeling and intention of the original architecture of the area. For their part, the homeowners argued that this style of home traditionally used darker tones and produced mountains of evidence to support that claim.

The house had already been painted and wasn’t going to change, so the neighbors’ retaliation came in the form of a demand that the entire landscape plan be approved by the Historic Preservation Board. I attended meetings with the homeowners during which we were asked to justify each plant we intended to include in the landscape along with every last detail of the hardscape we intended to install.

We ended up feeling as though we had been tortured by the “taste police” and came to see that there was no clear logic or any sort of guideline for what constituted “historic preservation” in this specific neighborhood.

I’m all in favor of voluntary preservation and, in some cases, of the idea of specifying a particular architecture style that must be adhered to within a community, my thought being that nobody can make you live there if you don’t like the style. In this case, however, I felt that the homeowners and I were being put through the wringer simply as a form of un-neighborly retaliation.

It was an ugly experience, but one from which I learned a good deal that I have applied to a variety of subsequent projects.

What I’ve learned is that there are two extremes when it comes to preserving classic architectural styles – voluntary on one side and legislated on the other.

As a member of a community of professionals who are paid to improve and enhance the appearance of everything we touch regardless of those extremes, I see it as our responsibility to find ways of restoring and preserving the settings in which we work in ways that make sense and that don’t intentionally serve to disturb or provoke.

We’re working in areas of taste, opinion and perception that can make diplomacy difficult and compromise distasteful, but I’m suggesting on some level that all of us have a responsibility to negotiate our ways to reasonable outcomes. In that environment, I keep an eye on the following methods in striving for “positive solutions”:

[ ] The value of collaboration. There’s strength in numbers, and I see working with a team of professionals and embracing a range of ideas and backgrounds as offering some assurance that if someone has an idea that is out of line, someone else will speak up and bring the design closer to acceptable stylistic standards.

[ ] The value of resources. Finding historic references to assist in historically appropriate landscape design is the best way to observe what types of plantings are commonly present within a style and how they are used. Many libraries and bookstores have good architecture sections, and a few even have good collections of landscape references. Botanical societies, arboretums, botanical gardens and long-established local nurseries are also good resources. Be aware, however, that the subject matter is seasonal and that many plants aren’t long-lived, so even historic references or photographs may be of limited help.

[ ] The value of precedent. In using available resources, you may need to interpolate what was intended from images (often black and white) in books. With this imperfect record, you may need to look for an overall style and then find plants that fit that style. Absent solid information, I don’t recommend “reinventing the wheel” in historic-preservation projects: You may end up with something that doesn’t fit.

[ ] The value of subtlety. A landscape is typically meant to enhance architecture rather than compete with or detract from it – to complement rather than overwhelm. I could cite examples in which gardens are extremely prominent features of an overall setting, of course, but the best approach to take when you’re compelled to interpolate or interpret is to focus on plantings as role players, whether they serve to soften hard lines or to accent specific details of surrounding structures.

THE TASK AT HAND

Cutting back to the specific project with which I’m now involved, we have identified some basic principles we plan to follow in designing both the hardscape and plantings. As we do so, our aim is to:

* Avoid drawing too much attention to the plantings

* Follow historic precedent, but take a slightly updated approach with the plant palette by adding in plants that are newer to our nurseries and work well in a historic context rather than sticking strictly to “historic” selections

* Watch what we do and avoid taking things too far by maintaining steady dialogue between the homeowners and the design team.

Landscaping can be the most striking visual asset in any setting, or it can play a supporting role that enhances and supports the architecture. When it comes to preserving history, it’s best to research the subject thoroughly and, in reasonable ways, keep history working with you rather than against you.