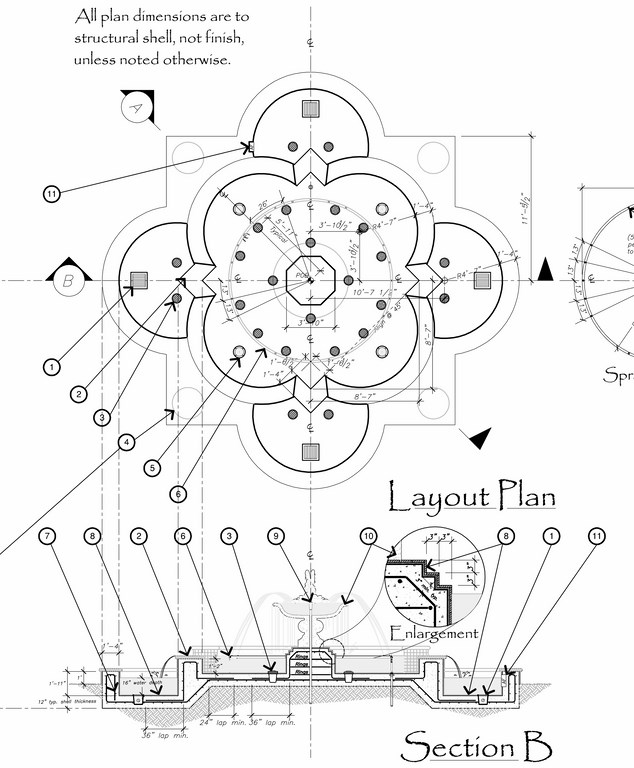 As the fields of landscape architecture and watershaping intermingle, the knowledge bases for each trade increasingly need to be shared across various design, engineering and construction disciplines.

That sharing, unfortunately, has been relatively slow to develop, which means that, as a designer and builder and of custom high-end watershape and landscape projects, I am often frustrated by the lack of detail I find in plans and specifications generated on all levels of the trade. Although this deficiency flows freely from all sectors, the most frequent sources of inadequacy in watershape plans are landscape architects and designers, too many of whom offer information that is disturbingly vague and thoroughly lacking in detail.

We’ve all seen the blue patch on the overhead plan view – a grossly inadequate delineation of a significant design component if ever there was one. Contractors presented with such documentation are left to define specific details themselves and essentially are asked to build some version of that blue patch as they see fit.

In my career, I’ve designed thousands of watershapes of all types and sizes and, through my experience in teaching college-level watershaping classes to landscape-architecture students, have influenced the design of countless others. Along the way, I have formulated basic sets of criteria I offer as standards for adequate design documentation.

Certainly, there are broad variations that influence every project, but experience tells me that watershape designs will flow much more fluidly in the construction stage if certain considerations are universally integrated into the design stage. I advocate this degree of standardization because watershaping is a varied set of disciplines practiced by people with incredibly diverse educational and professional backgrounds. The stakes are high enough that these variables leave too much to chance. 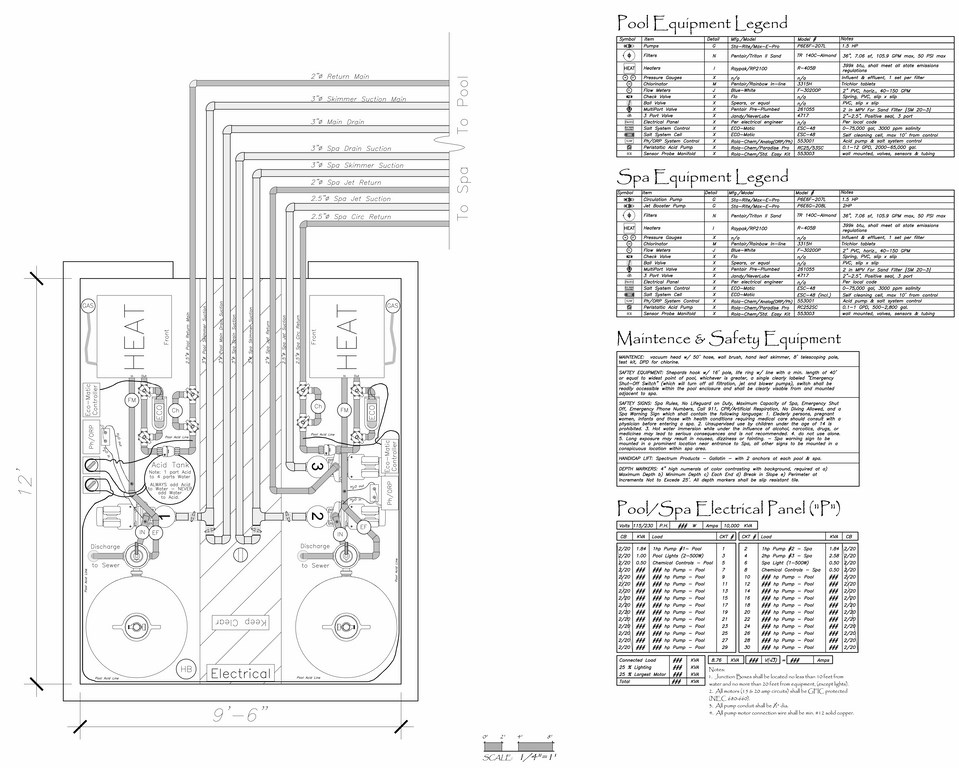 Until a standard emerges, the content of plans and specifications will be determined by the individual builder, with necessary nods to local building departments. That lax arrangement, in my view, leaves much to be desired. Conversely, establishing a set of standards that makes sense will benefit everyone – designers, engineers, contractors and clients alike.

Let’s start with an obvious point: All plans and specs for watershapes should begin with a basic, functional description of the project at hand. Is it to be a bathing environment? If so, is there to be a spa, an interactive waterfeature and/or exercise equipment? If the design is for an ornamental feature, is it to contain fish and plants, or is it to be sanitized in a way that precludes their presence? Is this to be a commercial or residential project?

After these overriding, first-things-first questions are answered, we can very quickly structure a design that fits the appropriate situation. My own firm asks these questions of designers almost every day to get them to transform their blue-patch visions into something that can be bid on and then built. 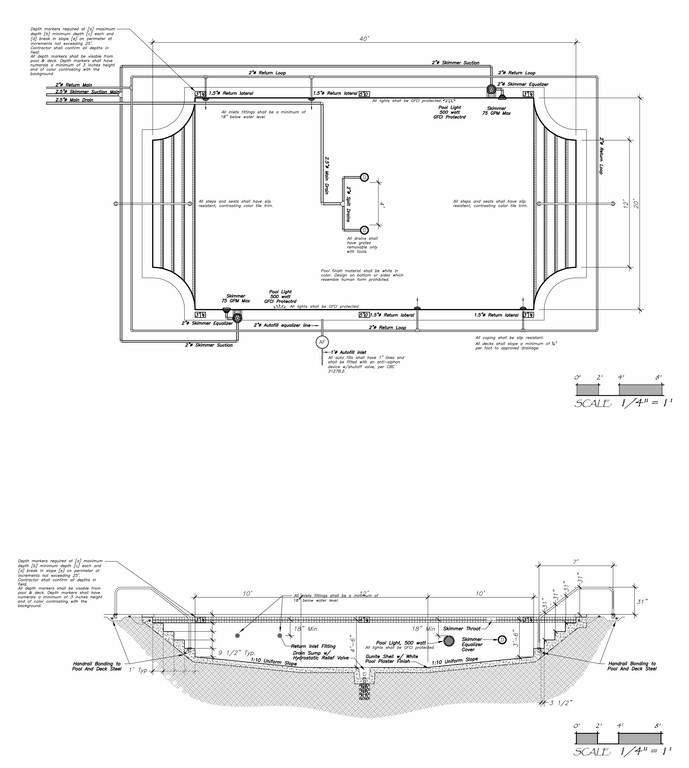 When quality plans are subsequently prepared and sent out for bid, the cost factors are much more definable – and little is left to the imagination. When those quality plans are subsequently built, the contractor has a fully illustrated roadmap to show to employees and subcontractors. It’s a situation that lends itself to completion of quality watershapes that look and work as intended.

The lists below cover the essential elements that should be included in quality sets of plans. I recognize in offering the list that it’s just a starting place: What’s needed in addition is for everyone involved in the process of generating and following such plans to have a reasonable understanding of soils, structures, materials, equipment, hydraulics and the relationships among all those elements and more.

That would be the best of all possible worlds for watershaping. In the meantime, a focus on plan basics can work to everyone’s benefit.

[ ] Note equipment locations at correct size: Too many times, we open sets of plans supposedly ready for bid that show a three-by-five-foot rectangle (too often just below an openable window) that crowds the legal setbacks. Such a pad might have held an equipment set in the 1960s, but most modern equipment configurations need a space 4 by 11 feet or more to accommodate heaters, pumps, filters, sanitizing systems, manifolds and controls.

[ ] Indicate coping elevation and material: What makes up the edge of the watershape? Is it stone, concrete or tile? Without this specific information, the shell cannot be formed or shot at the required elevations and dimensions. There’s also the fact that the watershape is often the first project element built on site: Without proper grading and layout, every subsequent element will be knocked off the desired mark. 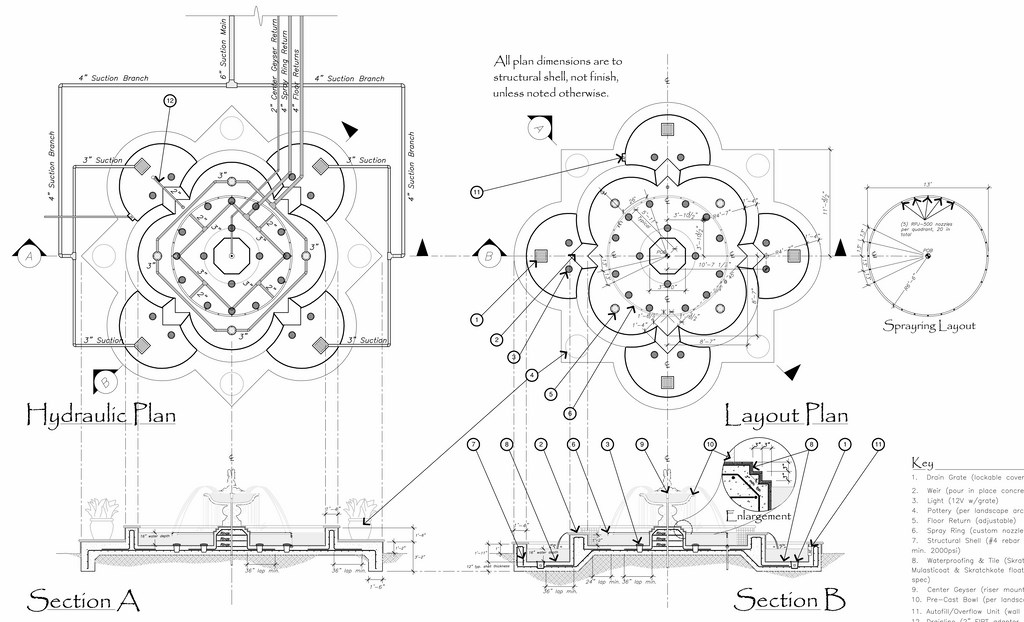 [ ] Clearly define the water’s edge: It used to be that we didn’t have to worry too much about where the water stopped, but with the growing popularity of beach entries, there’s a real need to define exactly where on the slope the water is supposed to stop. This should be the thickest line on the plan for many reasons, not least of which is the basic need to calculate volume accurately.

[ ] Note utility positions: All plans must clearly define electric, gas, water and sewer access – information that should be developed during the initial site survey. Equipment locations are often selected in accordance with this information, and making the utilities all come together in one spot is often a considerable cost factor.

[ ] Consider fencing and gates: The issue of fencing and gates – materials, heights and closing methods – is increasingly important to designers. In more and more areas, city building officials will not permit construction of bathing environments without comprehensive fencing-system design. Indeed, building departments now require more information on this aspect of a project than any other because most now adhere to state codes.

[ ] Define finish material selections: What are the finish materials (tile, plaster, pebble, stone?) to be used for every surface in and around the watershape? Too many times, designers think glass tile but never say anything and wind up with an inexpensive turquoise ceramic tile instead.

[ ] Produce depth profiles for the pool bottom: These can be rough, but having this depth profile is essential in volume calculations and is obviously important when it comes to forming and building the shell. Some depth changes can be dangerous if they’re too severe, so watershapers must build to defined cross-sections in confirming how steep the floor of the bathing environment will be.

[ ] Specify step and bench locations: How will bathers get in and out of the water? While they’re in the water, where will they sit? This should be designed, as is the case with any seat-wall on a dry deck. Thinking about swim lanes as part of this process makes sense: You don’t want lap swimmers colliding with steps or a bench.

[ ] Indicate lighting locations: These days, a watershape’s lighting system has to align with an architect’s lighting plan, in which case pool or spa lights are thought of as just another fixture. Builders may end up selecting models and wattage, but locations are an essential design feature. These decisions also dictate where junction boxes will be located (and hidden, if that’s an issue). 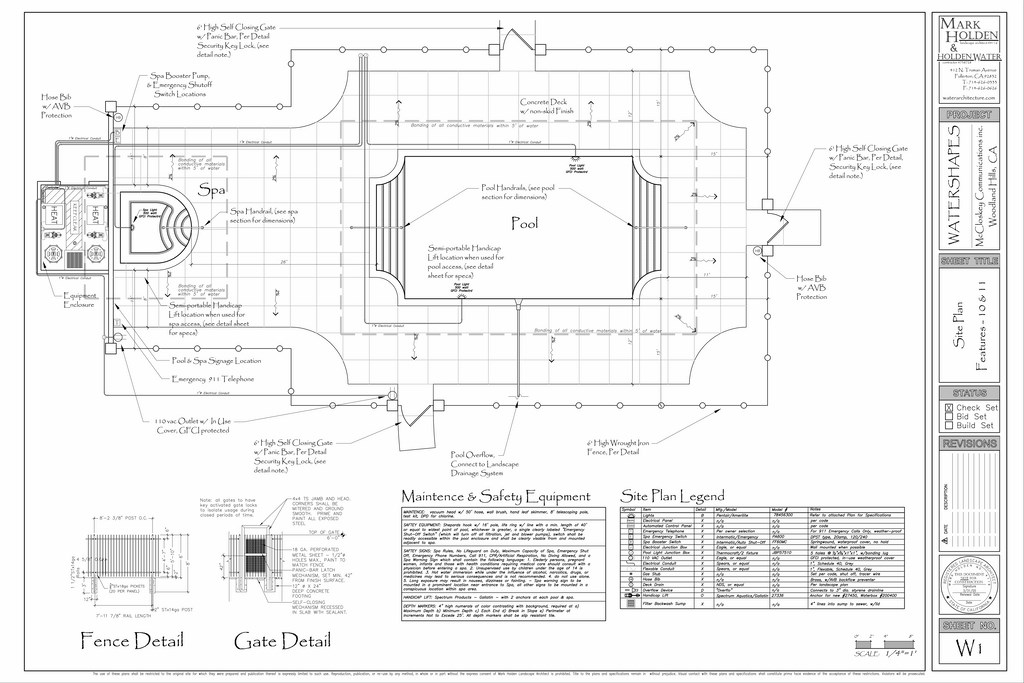 [ ] Note remote-panel locations in buildings: If there are to be in-house controls, indicate where they are to go. A builder will often pick the wall closest to the equipment, which may save him or her some time but will forever inconvenience the homeowner.

[ ] Select the sanitizing system: Will the pool be treated by trichlor, bromine, ozone or saltwater chlorination? The designer should choose the sanitizer as well as the system or systems that will be used to monitor and deliver chemicals to the water. This means the designer needs to be versed in the advantages and disadvantages of various sanitizing agents.

[ ] Confirm building codes for setbacks: One call to the planning and building departments can tell a designer how close water can come to property lines. Plans that don’t include this basic information may well turn out to be illegal and are unlikely to be granted permits or pass inspections.

[ ] Note equipment locations at correct size: As with pools and spas, equipment locations must be accurately and adequately specified. The key to plan clarity is an understanding of how big things can get. Indeed, many waterfeatures require larger equipment than pools because of the fast turnover rates required to run certain effects.

[ ] Indicate coping elevation and material: This is another concern that applies both ways – and it may be even more important with decorative waterfeatures, because they tend to be more coordinated with levels in the surrounding hardscape.

[ ] Define the depth of water flowing over weirs: This may be the single most important piece of information in waterfeature design. Without knowing a desired depth of water that is meant to flow over the weir or edge – a half-inch, say, or one inch or three? – there is no way to determine the hydraulic system needed to drive the waterfeature. This is not an area for guesswork!

[ ] Determine the amount of water emanating from spouts: Do you want a thin column of water or a foamy geyser? How high will the spray travel? If the water issues from a wall spout, how far out does it need to go, and how thick should the stream be? Along with flow-depth information for weirs, this is critical design information.

[ ] Specify light fixture location: As a rule, lighting is more important to the aesthetics of decorative waterfeatures than is usually the case with pools and spas. Even greater detail is therefore required, including makes and models, specific locations and wiring requirements.

[ ] Define the water-treatment modality: Is the waterfeature to be a biological system with fish and plants? If so, how will those fish and plants be kept alive and flourishing? If the system isn’t to be biological, what sanitizing system will be used?

[ ] Project the extent of living populations: If a system is to be biological, it’s important to know just how many plants and animals are to be sustained. Overburdened Koi ponds, for example, can produce so many toxins that the Koi will suffocate.

As evidenced by these basic lists, answers to most plan-related questions are matters of common sense. Despite that fact, however, the majority of plans that cross our desks are deficient in one or more of these areas.

To me, it’s all about professionalism: At a minimum, plans for watershapes should provide what I’ve offered as a standard level of information – or they run the risk of missing the mark in one way or another.

In our business, we will not bid on projects based on assumptions and will not spend the often-protracted amounts of time required to straighten out all the details and get the answers to our fundamental questions. And it’s not often the case of the designer knowing what’s involved and simply failing to include the information: For the most part, designers of whom I’ve asked these questions clearly haven’t considered these issues at all.

Clarity in plans is an asset to everyone involved in a project, from the designer through to the contractors and ultimately the client. I see rays of hope in a conviction that developing higher degrees of detail in plans is clearly within our collective grasp.