Plastering When It's Hot? 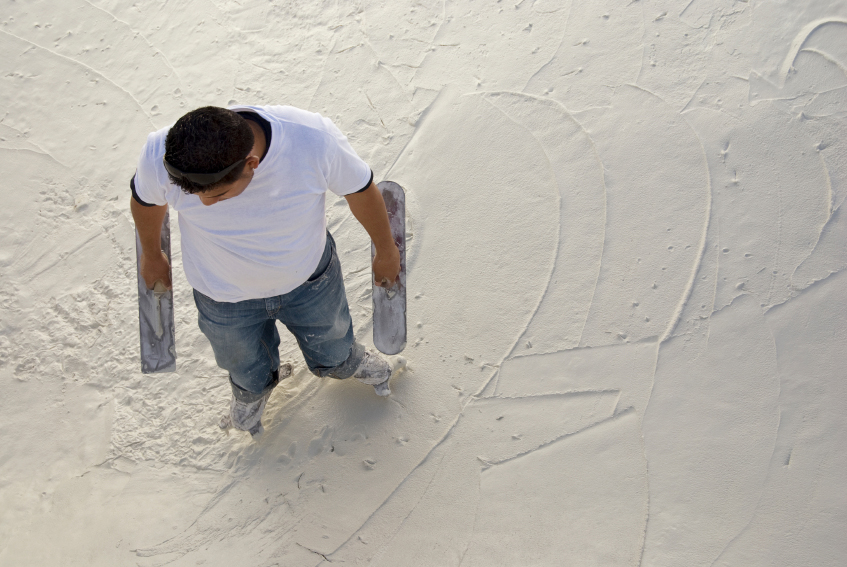 In several of the articles I’ve prepared for WaterShapes, the point has been made that it’s not a great idea to apply plaster as the interior finish of a swimming pool (or any other watershape, for that matter) in spells of hot, dry weather – and I thought it was time to dig in a bit deeper and explain the reasoning behind that assertion.

Basically, when a layer of plaster of whatever thickness is applied and its surface dries out completely, both the hydration and hardening processes stop prematurely.  This results in a plaster finish that is soft and weak – one that will, when submerged in water, not be up to withstanding the challenge.

To demonstrate this phenomenon, the team at onBalance – a consulting firm that performs research on pool water chemistry and assesses its effects on plaster surfaces – prepared a plaster sample (known as a coupon) and exposed it to the sun on a day when temperatures reached 90 degrees at about 25-percent humidity.

The next morning, this coupon, which we labeled as A, was placed in balanced water with a Langelier Saturation Index reading of +0.3.  After five days, plaster dust was visible on the bottom of the tank.  The coupon was removed, and the plaster dust (calcium carbonate) that developed in the water was dissolved by adding acid.  The resulting calcium hardness level in the tank was determined to have increased to 65 parts per million (ppm).

That result in hand, we prepared additional coupons for testing under other conditions – and the results were eye-opening.

In the next experiment, two samples were prepared on a day when the ambient air temperature was a bit hotter, at about 100 degrees, and the humidity was a bit lower, at about 15 percent.

The second sample (B) was left to dry in the sun; the third (C) was immediately moved to a controlled environment where the temperature was 75 degrees and the humidity about 35 percent.  We left them alone to cure for 24 hours.  The next morning, both B and C were placed in separate water tanks.

After five days, the water in the tank with plaster coupon B had a calcium-hardness increase of more than 120 ppm after we dissolved the plaster dust.  That translates to approximately 20 pounds of solid calcium carbonate being dissolved from the plaster surface in a 20,000 gallon pool!

Plaster coupon C, which had hardened in a temperature/humidity-controlled environment, did not develop any visible plaster dust.  When we added acid to dissolve whatever might have been there, we discovered that the calcium hardness of the water had increased by only 10 ppm.

In other tests, it was also determined that if calcium chloride (a hardening accelerator) is added to the plaster mix, an even higher amount of plaster dust formed in comparison to plaster samples that did not have any calcium chloride added, regardless of temperature.

No matter the source, however, when calcium is lost from a plaster surface, it causes a loss in density and an increase in the porosity of the surface.  This in turn results in a loss of long-term durability of the plaster surface and will make it a likely trap for dirt and minerals and thereby more subject to staining and discoloration.

These results fall in line with studies conducted by the Portland Cement Association (PCA) and the American Concrete Institute (ACI).  Both have shown that working with cement under hot, dry conditions has a detrimental effect on the quality and durability of cementitious products and suggest various methods to protect surfaces finished under these conditions.

For our part, we conducted our study in an attempt to isolate a cause for the sort of discoloration that is often observed on the plaster surfaces of darkly colored pools.  Our suspicion had been that increased porosity caused the whitening or lightening of these surfaces over time, and we attributed this to early losses of calcium and/or other plaster materials.

This has been a matter of discussion (and occasional controversy) in the industry for many years – but our experiments tell a clear part of the story.  We’re also aware, of course, that it is not the whole story.

As was observed in a recent WaterShapes article on the subject (linked below), plastering in hot, dry weather is only one of the factors that can, under defined circumstances, compromise the integrity of a new plaster finish.  Adding calcium chloride to an integrally colored plaster mix, for example, or applying excessive water during the troweling process can also result in increased porosity and subsequent lightening.

It is also a fact that water chemistry can play a role here:  If the water is out of balance and alkalinity is high, scale formation will result – and that, too, can whiten the surface of a colored-plaster pool.  That possibility aside, however, it is clear enough that plasterers know not to plaster on hot, dry days.  If there’s any doubt of that, why would they have come up with approaches intended to minimize the negative effects?

Some, for instance, will immediately fill the pool with water after final troweling, asserting that if the plaster is allowed to cure under water, it will not crack or craze in the heat.

This, however, is only partially effective.  Yes, the plaster matrix does gain strength while curing under water, but it is also true that the plaster layer’s surface needs to be sufficiently hardened before being challenged by submersion in water.  Filling the pool before this hardening can take place allows the water to overwhelm the desired water-to-cement ratio at the surface; this can cause a number of defects, including a general dissolution of plaster material from the surface.

This has been documented in an onBalance blog (“Poor Plastering Practices vs. Aggressive Water”) and will be the subject of an upcoming article in WaterShapes:  Only after the surface has been properly hardened is curing under water completely beneficial.

Moreover, competent plasterers know that using a low water-to-cement ratio, adding little or no calcium chloride and avoiding the addition of water during troweling are effective means of avoiding the kind of cracking the “immediate filling” adherents claim to avoid.  And those good practices help avoid cracking even in hot, dry conditions.

Another approach finish contractors use to avoid problems associated with applying plaster in hot, dry conditions – and this is highly effective – involves tenting the pool and using an evaporative cooler to supply lower-temperature, reasonably humidified air to the space under the tent.  (Not only does this help the plaster:  It’s also kind to plasterers!)

Tenting works well particularly because high humidity is recognized as a beneficial to the curing process by virtue of helping the plaster retain its original moisture content, thereby allowing for proper hydration and curing.  The tent should be put up and left in place through the entire plastering process – not just until application is complete, but also through the six-hour waiting period before filling begins and through the entire process until the watershape is full.

Tenting also has a side benefit in that it helps plasterers avoid adding water while troweling – a practice that can by itself lead to problems with durability and variable coloration.

Moving past the observations and recommendations of PCA and ACI, we recognize that pool plastering is a more challenging process than is the case with other cementitious applications, mainly because pool plaster, first, is generally troweled to a smoother finish than is concrete flatwork and, second, is a much thinner, more cement-rich application that needs to be able, within hours, to withstand the challenges of pool-water chemistry.

Plastering is a hard thing to get right, in other words, which is why it’s so important to follow best practices and follow recommendations derived from cement science.

To see my article on factors involved in plaster discoloration, click here.