How to Make Durable Pool Plaster 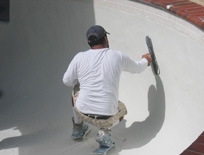 As familiar as it may seem, plaster is far more complicated than most people think.

As a consequence of that complexity, it has for years been the subject of discussion, controversy and a great volume of research and analysis. All of that has been dedicated to reaching a better understanding of plaster‘s performance, including the causes and mechanisms of problems ranging from etching, scaling and nodule formation to delaminations, spotting, staining and general surface deteriorations.

In the process, we‘ve learned something unsurprising — that known principles of concrete/cement science actually apply to pool plaster. This recognition has in turn led to development of a list of ten basic recommendations that reliably result in the creation of durable plaster.

Keeping It in Perspective

White plaster is a good and relatively inexpensive surface that makes many pool owners happy. Indeed, properly applied and braced by reasonably good maintenance, a white plaster surface will last about 20 years.

These finishes are not inherently weak, nor are they unable to stand up to the “real world” environment of pools exposed to the vagaries of chemistry and maintenance. This is evidence that many pools are plastered correctly by good plasterers. And this is true despite the suggestion in recent years that pozzolans, blended cements, quartz and pebble aggregates can provide even better results that white plaster. It is important to note that none of those alternatives negate the need for proper workmanship!

In the real world, of course, we all recognize that some variables fall beyond the control of even the most professional tradespeople: Weather happens, materials that are assumed to be consistent may vary, and well-intentioned but unknowledgeable outsiders can intervene. It‘s also true that pool plaster is a hand-crafted product, and nothing in nature — especially where humans are involved — is perfect.

But a plaster finish can also be poorly made. If only one minor abuse of the above guidelines occurs, it probably won‘t manifest its effects in any visible way early-on. If more than one of the abovementioned practices is significantly abused, however, then far quicker deterioration can take place, even in balanced water. When problems arise, I would suggest that those involved should investigate whether these guidelines for providing a quality, durable plaster surface were followed.

Today‘s technology provides us with the ability to analyze plaster for most of the abovementioned issues, including such tell-tales as the water-to-cement ratio, the cement-to-aggregate ratio and the calcium chloride content. Technology can also determine whether the surface is more porous than the interior matrix as a result of water additions, and whether the plaster has been etched by aggressive water or has simply deteriorated as a result of its poor quality.

In this context, adhering to good plastering practices and standards and then following accepted water-balance practices will eliminate almost all pool plaster problems. Ultimately, pool owners will be happy — and our industry will prosper.

Kim Skinner has been part of the pool industry for 40 years as a service technician and plasterer and as president of Pool Chlor, a chemical service firm. He has conducted laboratory and field research on pool water chemistry and on the relationships between water chemistry and pool plaster surfaces; he also developed the bicarbonate start-up method for new plaster pools. Currently, he is with onBalance, a consulting group that also includes Que Hales and Doug Latta. For more information, go to www.poolhelp.com.