Designs with Infinity in Mind

We describe them using many terms – as vanishing-edge, infinity-edge, negative-edge, knife-edge, slot-overflow, flooded-deck, gutter or perimeter-overflow pools, among others – but no matter what we call them, all of these watershapes operate on the same basic premise: By moving a sufficient quantity of water from a collection basin or tank to a visible main vessel at a sufficient rate, we can create systems in which the water overflows across one or more or even all of the main vessel’s edges.

Common to all of these pools are dam walls – walls that are always wet on one side but dry on the other (when the system isn’t overflowing) or wet (when it is). Some of these walls are many feet tall, but in lots of cases they are only a few inches tall.

These watershapes also share catch basins that serve to capture the overflowing water. In some cases, these basins are attached to the pool, while in others the water is transported to remote storage vessels generally known as surge tanks. These remote vessels can be placed in any convenient place, whether it is under the pool equipment room, adjacent to the pool, under the pool deck or somewhere across a lawn. These basins or tanks or storage vessels all serve the same basic function, so the terms can be used interchangeably. Wherever they’re placed and whatever you call them, there must be allowance for access to the inside of the basin or tank for maintenance and debris removal.

It all sounds pretty simple, and in principle it is. But between concept and execution are many pitfalls that need to be considered, managed and overcome by those who design and build these watershapes.

As an expert witness and a builder who is occasionally called in to evaluate or take care of troubled watershapes, I encounter recurring sets of problems with these pools, which can be described collectively (but not very glamorously) as water-in-transit vessels.

Quite often, for instance, I come across water-in-transit systems in which the surge tanks are too small. That’s a problem, because these systems must store enough water to fill the circulating pipes, raise the level of the main pools so that they overflow and then have enough left in them to resupply the storage tank. (This repeating circuit, by the way, is where the term “water in transit” originates.) For the most part, the flow to storage is driven by gravity: Water flows over the edge, collects in a basin or pipe system and flows downhill to a storage tank from which it is pumped back up into the main vessel. 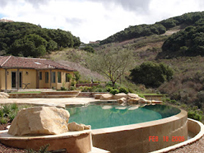 Obviously, there must also be a “reserve” of water left in the bottom of the tank to prevent the drains from vortexing (swirling) and taking in air. This sucking of air can cause the pump to lose prime and eventually damage itself – not a desirable outcome. It can also make a system very noisy.

The next common problem I’ve observed has to do with the way circulation systems are designed, especially when it comes to the number, placement and sizes of drains. The aim with these systems is to enable any debris to flow easily into the catch basin or surge tank for collection and removal. If there aren’t enough drainage points, leaves and other material can accumulate and restrict the flow, starving the pumps for water.

A related problem occurs when designers or installers fail to put a filter behind the edge pump. This means that almost all of the debris that ends up in the collection vessel gets sucked into the pump and is then regurgitated into the main pool. Ground up worms and leaves might make a good stew in a pinch, but they don’t harmonize with the aesthetics of refined water-in-transit effects.

Where too little water in the system is obviously a problem, too much can also be troublesome. Many of these systems are installed atop slopes to take advantage of distant views; serious problems arise when excessive water has no place to go other than over the edge of the catch basin and down a slope that gradually gets undermined and collapses. The best idea here is to include an uncloggable overflow system that will allow for the control and harmless off-slope discharge of excess water.

The physics of water and its inclination to seek its own level come into play here as well. Backflow from the main vessel to the (generally) lower-level collection system must be prevented to avoid overflow disasters. Check valves aren’t reliable enough for the long haul, so in our work we rely on gravity to prevent backflow, using plumbing loops to keep water where it belongs when systems are turned off.

And a Few More

Other issues with these projects are of the aesthetic variety. Improper deployment of the return lines in the main vessel, for example, can cause unwanted surface turbulence that will destroy the glassy, mirror effect that ordinarily makes these watershapes so attractive. The issue here can been excessively high flow rates or improper placement in the walls either with respect to elevation or position relative to the edge. Sometimes, it’s simply poor aiming of the eyeballs guiding the return flow. 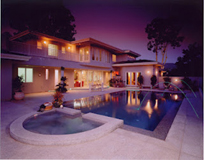 The fixes here are all simple – there is no reason for turbulence to be an issue – but it’s important to note that the best solutions all come with being familiar with the dynamics of these watershapes, as well as planning to prevent surface turbulence at the design stage rather than after the watershape has been built!

And now we come back to the dam walls mentioned at the start of this article. Some watershapers fail to accommodate the fact that the dam walls in water-in-transit designs are meant to be visually exposed on both sides; therefore, the walls require more rigorous attention to construction details.

Often, for example, incorrect construction techniques will result in walls with voids that allow water to seep through from the main pool (where there is always water) to the exposed edge (which cycles between wet and dry as the system is either on or off). If that is combined with inadequate waterproofing, the result will be walls that weep and a constant struggle to keep ahead of unsightly efflorescence.

In addition, the materials on the outer/overflow side of the wall are constantly exposed to transitions from wet to dry, cool to hot and contracting to expanding. The materials will delaminate if the surfaces to which they are applied have not been properly prepared or equipped with adequate expansion joints.

When you take all of these hydraulic, mechanical and aesthetic issues into account, it’s clear that these watershapes are more complex than they seem at first glance. There’s actually a lot going on, and what you don’t know as a designer, installer or consumer can definitely take a bite out of you if you’re not careful and well-informed.

One final point that is often overlooked: The goal with these watershapes is to create overflow effects with the least amount of water in transit as possible. The aim isn’t to create a waterfall down the dry side of the dam wall; rather, it’s to create a gentle flow and a glistening, wet wall.

If construction goes as it should and tolerances for level at the edges are as they should be, it is possible to create the overflow effect by dropping a garden hose into the main pool. Many of the messes we are called in to remedy have to do with designers or builders having missed their targets and covering up for it by increasing flows over the edges to keep the systems working visually. In terms of energy consumption alone, this is the wrong way to go. A far better alternative is to work precisely from the start of the project to the finish and achieve the level edges that lead to maximum system efficiency.

Finally, you need to recognize that these watershapes, while visually beautiful when not in use as swimming pools, are also meant for use by swimmers who displace water that needs to be rapidly resupplied to the system to keep up good appearances. The recent introduction of variable-speed pumps has simplified this part of the program dramatically. After running at a low speed to provide the normal visual effect, they can ramp up their flow rates to return displaced water to the main vessel rapidly and automatically.

Bottom line: These pools are visually spectacular, but you need to know what’s going on to make them stay that way!

Paolo Benedetti is principal at Aquatic Technology Pool & Spa, a design/build firm based in Morgan Hill, Calif. He may be reached at This email address is being protected from spambots. You need JavaScript enabled to view it..