Ponds on the Level, Part 2 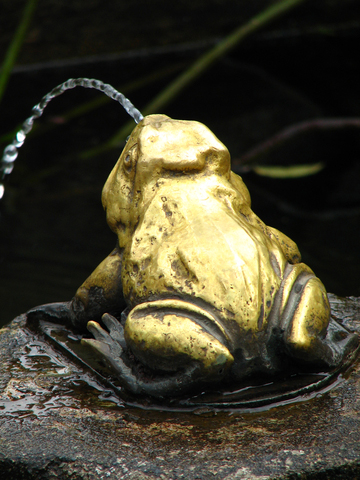 This is the second of three articles on using auto-fill devices with ponds and watergardens.

Auto-fill devices for use in managing water levels in ponds and watergardens come in three main forms:  mechanical float valves, electromechanical timed valves and electronic sensing systems.  In this article, we’ll take a look at each system and weigh advantages and disadvantages.

Let’s tackle price first:  Of the three , float valves are the most popular mainly because of their low, entry-level cost.  Electromechanical systems are also inexpensive, but they generally run on batteries, which involves an ongoing expense, occasional battery-changing hassles and the possibility of a gap in service if the batteries run out undetected.  Electronic systems are substantially more expensive than devices of other types, but they’re built for and perform for the long run.

Let’s move on to discuss these systems and their characteristics in more detail – then we’ll double back to price issues and start to define relative value.

Float valves are simple devices that function for ponds in much the same way as they do for toilet tanks:  When the water falls below a pre-set level, the float sinks, triggers a valve and replenishes the supply.  As such, these systems are both time-tested and reasonably familiar – but they do have their drawbacks because they are mechanical devices subject to malfunctions and breakdowns.

The Internet is rife with tales of horror of expensive koi and pond pumps being lost as a result of float valve failures.  This has spurred inventors to redesign these valves and make them more reliable, but the available systems are all variations on the same fallible mechanical theme:  With any mechanical object, moving parts can wear over time and will stick and cause problems.  And this is especially true in the working environment of a pond, where valve operation is tested by algae, oxidation and other destructive elements.

Where electrical components make electromechanical timed valves more reliable than their simpler float-valve cousins, they are nonetheless mechanical devices in the same challenging environment and are just as subject to mechanical failure.

By contrast, electronic auto-fills have no moving parts and are therefore less likely to fail in the face of environmental challenges.  In fact, the main issue with performance of these systems has to do with power losses:  Where a mechanical device will keep working through a power outage, electronic fill devices will shut down (unless they have battery backups, which is a typical option).

Consider as well that, when the power is down, the pond pumps will stop working, too – meaning no circulation, no splashing of waterfalls or cascades and limited evaporation.  This means less water loss, smaller level changes and less concern that the auto-fill system is also offline.

As pros and cons are weighed, it’s safe to assume that all of these systems work and that at some point the larger issue of system value will become a key consideration.

The components used in most ponds – liners, pumps, filters, rock, plants and fish – all tend to be affordable, so it might seem out of line to go with an electronic fill system that can cost hundreds of dollars when mechanical systems are available at significantly lower cost.  Even if a float-valve system breaks down repeatedly, the logic goes, you’d have to go through a number of them to come close to making the costs equivalent.

The point here is that the peace of mind that comes with the greater reliability of electronic systems not only removes one headache from pond management, but it also puts the pond’s owner in a better, long-term frame of mind about how the system will work.  And if the pond installer has done his or her magic – in essence, creating a Rolls Royce-level experience – isn’t there some value on knowing that the system is backed up by Rolls-Royce-level components?

Next, we’ll examine the practicalities of filling systems and how they’re installed.

Hollye G. Merton began building ponds while in elementary school, inspired by her father’s construction of a Japanese-style pond in their backyard.  In 2009, she founded Aquility Systems, the manufacturer of the Level Waters automatic water-leveling system.  She may be reached at This email address is being protected from spambots. You need JavaScript enabled to view it..