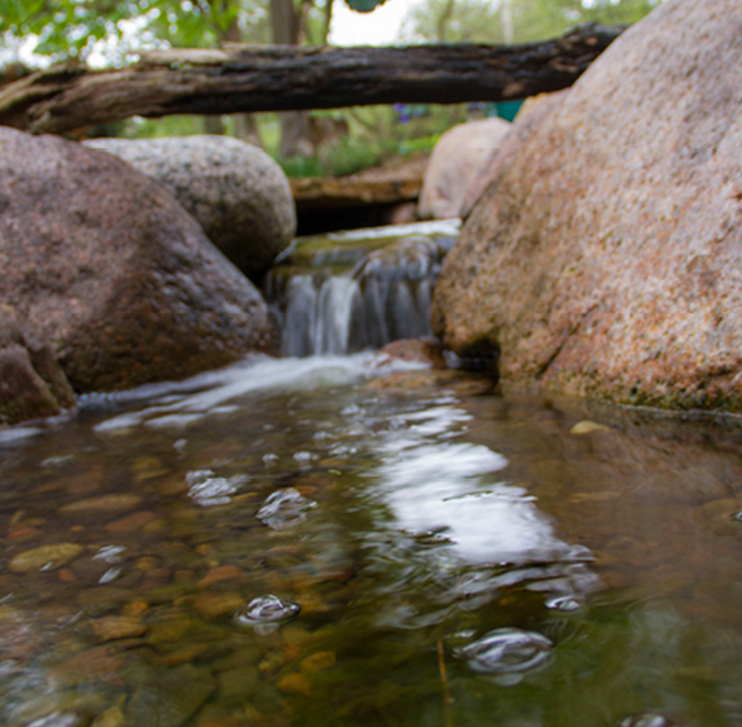 One of the least heralded factors in pond health is also among the most significant:  It's all about oxygen, writes Ed Beaulieu, who reviews the basics while offering some suggestions on how to keep it's level up where it needs to be to make both fish and plants happy.

Few would dispute the assertion that oxygen is the most vital of all elements found on the face of the Earth.  And that’s not just because humans couldn’t survive without it:  Almost all organisms on the planet are dependent upon the availability of oxygen in one way or another.

This particularly includes our waterborne friends:  Fish and aquatic plants may get their oxygen from slightly different sources and via somewhat different mechanisms than we do, but they need it just as much.  We extract it from the air, they pick theirs up from the water – and it’s safe to say that ponds burst with life solely because of the oxygen found in and around them.

So how does it get there?  We all know that water is a chemical compound – H2O – made up of two hydrogen atoms and one oxygen atom.  But that’s not the sole means by which oxygen finds its way into ponds.  In fact, if this were a pond’s only source of oxygen, there wouldn’t necessarily be enough of it to sustain an aquatic ecosystem.

It’s a compelling puzzle – so let’s pull it apart and reassemble it in ways that add a fundamental piece to an understanding of how ponds work.

Fortunately, beyond elemental water chemistry, oxygen has at least two other ways of getting into ponds.  The most common of these is basic absorption.  This occurs via agitation (such as the surface splashing generated by waterfalls or a floating fountain, or by the bubbling and subsurface disruptions caused by pond aerators) and is a function of the way the agitation expands the water’s surface area and thereby exposes it to a grand supply of atmospheric oxygen.

Oxygen also enters the water courtesy of aquatic plants, although this is something of a double-edged sword:  During the day, the plants absorb energy from the sun, use carbon dioxide and release massive amounts of oxygen.  At night, which is when these plants do most of their growing, the process flips and they use up oxygen while producing mass quantities of carbon dioxide.  So during the day, plants are friends to the fish; by night, not so much. 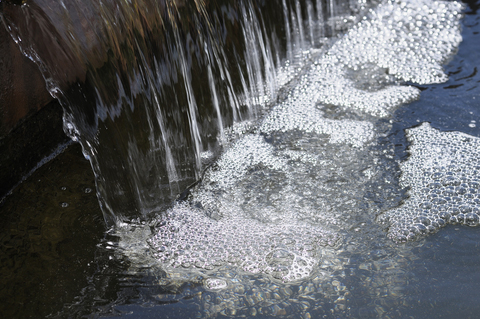 On balance, however, plants are good for ponds, especially fast-growing plants with lush foliage that grows below the waterline, such as anacharis, elodea and cabomba.  (Another strong oxygenator is algae, but that’s not anyone’s favorite in a pond.)

Once the oxygen is present in the water, it is used by aquatic animals and plants for respiration, which is the key to their growth and survival.  Oxygen is even used by bacteria as a means of helping them break down dead plant material.

When you add it all up, this means that healthy pond water needs oxygen at a minimum level of five parts per million (ppm) – but that’s a spartan supply sufficient only to keep fish alive for a few days.  When the level hits eight ppm, the fish are happier, but the ecosystem will be at its best when the oxygen levels are sustained in a range between 11 and 14 ppm.

Water alone is insufficient as a source of molecular oxygen to keep things at the higher end of the ppm range:  To sustain a healthy system, oxygen therefore must be supplemented by introduction via absorption or through plants.

Interestingly, this is one of those rare instances where ponds in cold climates actually have an advantage over ponds in warmer climes, because water below 60° Fahrenheit dissolves (and thereby carries) more oxygen.

Hot weather and water aren’t the only villains in the dissolved-oxygen saga:  The most obvious source of depletion is fish and plant respiration, which is one among several reasons why overstocking a pond is a bad idea.  As a rule, one inch of fish per square foot of pond is the recommended stocking quotient – so long as you consider that fish grow, and that they’ll need room to allow physical expansion to occur without compromising their health. 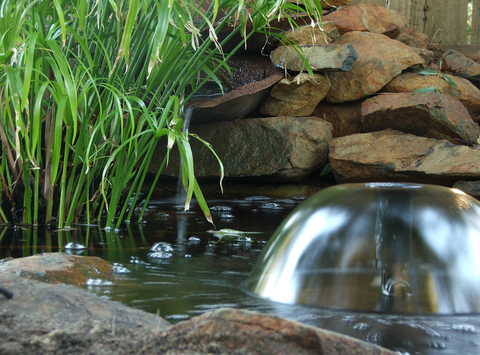 Various forms of bacteria are another source of oxygen respiration (and depletion).  In fact, beneficial bacteria have truly voracious metabolisms, and a good colony will consume far more oxygen than the fish population ever could.

Other drains on the oxygen supply include decaying algae, chemical treatments and deep water:  Algae eats up oxygen as it rots away; certain of the chemicals used to treat common fish diseases can consume a lot of oxygen; and deep ponds (more than five feet in depth) tend to have low levels of dissolved oxygen at the bottom.

All of these factors can set fish gasping for oxygen, which is yet another reason why it’s a good idea to include a robust source of aeration in a pond system, whether it’s a vigorous cascade or an active aerator.  The key is to devise a circulation system that combats stratification of the pond’s water – and makes certain the water keeps moving from top to bottom and bottom to top more or less continuously.

Checking oxygen levels on a routine basis is always a good idea:  There are simple test kits available in the marketplace that will tell an important story about the water’s basic condition and help the pondkeeper figure out what needs to happen to keep the oxygen level up where it belongs.

None of these oxygen-related issues will necessarily complicate pond operation or interfere with the ambition for them to be relaxing oases that provides relief from a day’s hustle and bustle.  Oxygen-level testing isn’t an everyday chore – and if the oxygen level is good, there’s no need to strive for improvement.

The fish and plants in the pond become accustomed to their surroundings in rapid order and make what adjustments are required to respond to the conditions they encounter.  All it takes is remembering that pond pets are just like us, living and breathing the same air – just a little bit differently!