With the huge pond and a moat that wraps itself around the house, it’s a variety of watershaping you’d ordinarily associate with a medieval French castle.  But actually, it’s part of a contemporary estate in Brentwood, Calif., in the backyard of a couple with an amazing desire for an aquatic kingdom they could call their own.

The couple had recently moved from the eastern United States and decided to take the fullest possible advantage of the temperate climate of southern California by filling their watershapes with a huge variety and ever-expanding quantity of lilies and other blooming aquatic plants.  They also introduced some large Koi to the water:  Encouraged by the big space, the fish would be quite ready to be fruitful and multiply as well.

And unlike many high-end, high-profile clients who tend to leave the details of observing a project to a manager or agent, these people wanted to be involved on every level, at least so far as what we were doing was concerned.  For the most part, their representatives did handle meetings with contractors, but if the clients were on site when we were there, the intermediaries stepped aside and we’d go over everything with them personally and in great detail.

This direct participation turned a huge task into a real pleasure:  Their energy and enthusiasm were infectious and kept us going through many months of hard, grand-scale work.

Because of the immensity of the overall project, our work occurred in three big phases.

We started with the waterfalls, which were positioned on the edge of the property away from where the house was being finished.  Once that process concluded, we broke away for several months during which the area that was to become the pond was used to stage construction activities related to the home, particularly for storing the masses of stone being used to dress the structure’s surfaces.  As those operations wrapped up, we came back on site and worked on the pond, then broke away again while the bridge, flatwork and driveway were being completed.  Finally, we returned to take care of the moat.

End to end, the project took about 18 months to complete.  Of that span, we were actually working on site for about three of those months.

In some of the construction photographs, you can see the imposing retaining wall that stretched along the back of the property.  It was a huge design challenge:  Although we were to build a waterfall in front of part of it, the wall was simply too long and tall for us to do the whole job of making it disappear.  Happily, it was a general source of aesthetic concern, so we were able to work in concert with the project’s landscape architect and landscape contractor to push it out of view, first by painting the wall surface green, then by liberally planting trees and tall shrubbery to mask it almost completely. 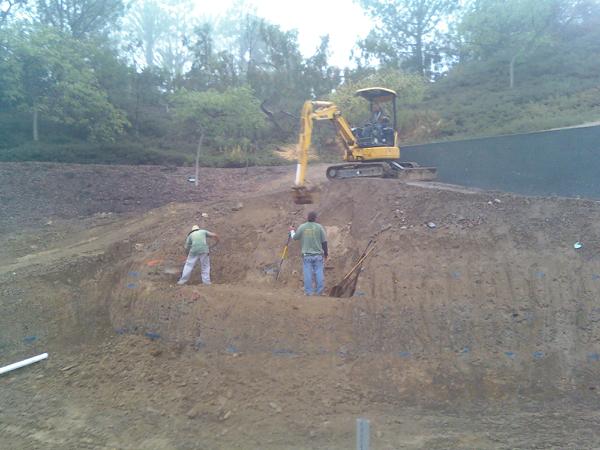 The waterfall itself was made up of tons of locally sourced stone.  We always prefer to use indigenous material in assembling our waterfalls and cascades, simply because we want what we do to be reflected in what the homeowners and their guests experience in local parks and open spaces – all part of the effort to make it seem as though the water has always been there.

In this case, the rocks and boulders all came from a nearby supplier.  This included one big specimen we called Big Blue, a multi-ton boulder we set at the heart of the waterfall system.  It was the same type of rock as everything we used, but it was bigger by far than anything else we brought onto the site and, when wet, had more of a distinctly blue coloration than was true of most of the other stone we installed.

Placing Big Blue was no small task:  The oversized crane we brought in to wrestle it into place was beginning to tip as the boulder finally reached its mark.  Still, it was a wee bit out of position, and we were all happy not to be in the cab with the crane operator as he picked it back up again and moved it over by about an inch.

The resulting waterfall composition is 15 feet tall and runs off a pair of five horsepower pumps.  (Both have variable-frequency drives, giving the homeowners great flexibility in setting moods by adjusting the flow from a trickle to a torrent.)  The core of the system is positioned in such a way that it’s the first thing our clients and their guests see when they reach the top of the driveway.  It’s also popular with the fish:  They seem to congregate where the water is at its most turbulent near the center of the falls.

When we came back on site several months after setting up the waterfall, we began our work on the pond, which occupies a space approximately 100 feet wide at the base of the falls and, reaching to a depth of four-and-a-half feet at the deepest point, contains about 100,000 gallons of water in all. 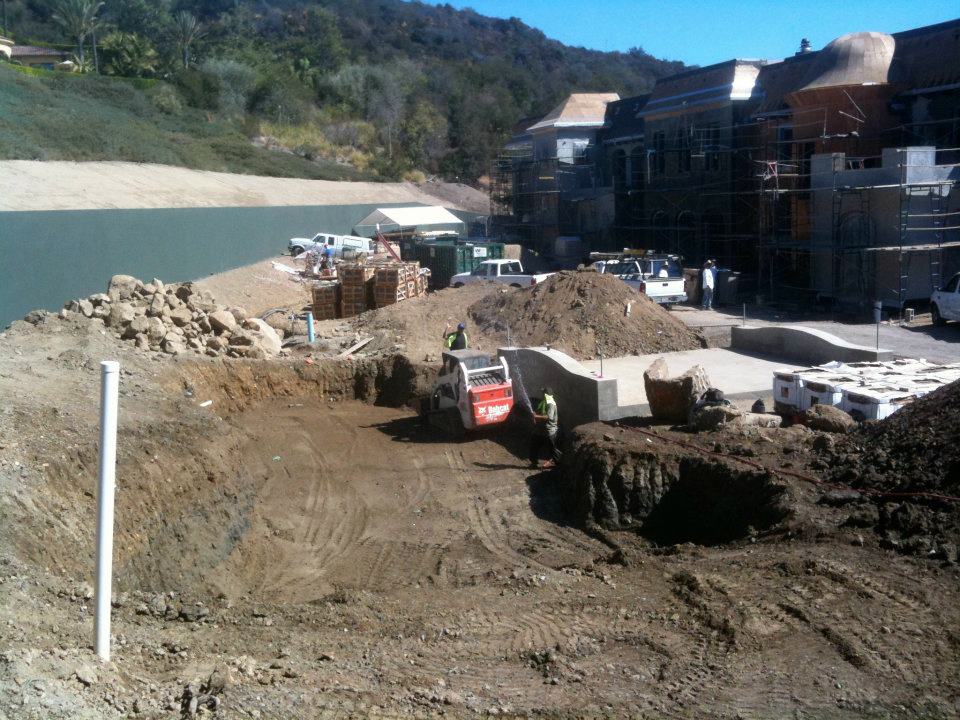 Even though it’s a large pond by any stretch of the imagination, it’s also scaled to fit what is a very large, multi-acre backyard.  The idea here was to maximize the surface area in order to maximize the populations of plants and fish the clients (and the watershapes) could sustain.

We set the pond up with a bottom-drain system.  In addition to the turbulence provided by the big waterfalls, there are skimmers and aerators in the water, and the plants do a remarkable job of keeping things clear (even with a growing population of Koi).  Nonetheless, we placed external filters and a UV sterilizing system in a separate equipment area as a way to simplify (and encourage) routine maintenance.

Before filling the pond, we completed the second phase of our work by installing a 12-inch pipe to pass under a bridge that had yet to be built.  This was to serve as a link from the pond to the moat:  We placed the pipe, sealed the far end and waited for the bridge to be completed before we began our main work on the moat.

In the meantime, we filled the pond and began planting.  The homeowners were deeply involved in this part of the project, selecting plants for type, blooms and colors and directing our efforts as we arranged them on the pond’s gravel bottom.

In a watershape this large, we knew how important a part the plants would play in keeping the water clear and healthy, so we went along willingly as they asked us to include far more plants than we ordinarily would have.  As a startup measure, we also supplemented the roots’ biofiltering action by addition of healthy quantities of beneficial bacteria.  The results are beautiful on multiple levels:  wonderful expanses of colorful blooms, big fish and startlingly clear water.

The pond area gets plenty of sun, but the area where the 65,000-gallon moat is situated, right up against the house for a span of 150 feet, is largely shaded.  With the tunnel under the bridge allowing the fish to go wherever they want, this gives them the opportunity to stay cooler during the summer, when the California sun can influence even a body of water this large.

The moat starts in front of the house, where the entryway looks something like a drawbridge.  It then wraps around one side and appears to flow under the bridge where we installed our 12-inch pipe as a fish tunnel.  Like the pond, the moat is skimmed, externally filtered and thoroughly aerated. 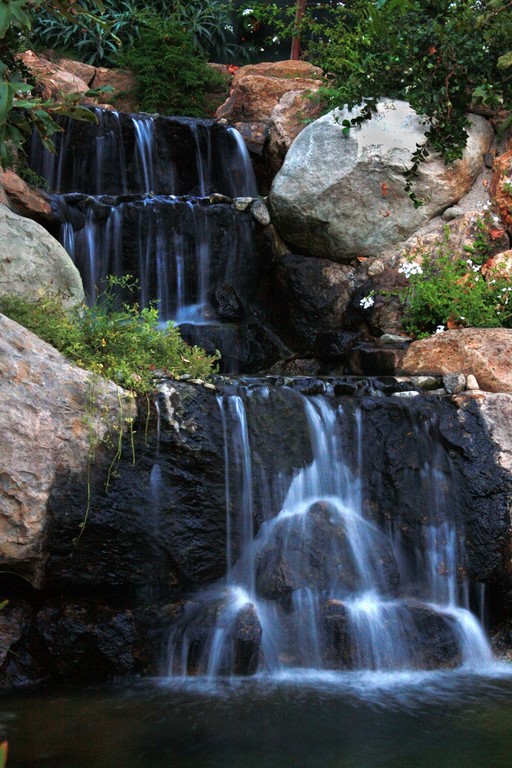 The house itself is clad in the same sort of stone we used in the waterfall system and around the pond, so everything ties together visually.  But the look near the home is refined, something akin to a tamed meadow.  The moat fits right in, with its sharper edges softened by plantings that hang over the water and its border of short ground-covering grasses that won’t need cutting.

In a project taking as long as this one did, a high level of coordination and cooperation among trades was of paramount importance.  By communicating clearly and often, we were all able to avoid the kind of conflicts over space and timing that easily arise, and it’s to the credit of the architect and landscape architect that our part in the unfolding drama went so smoothly.

From the clients’ perspective, water was always the key to the composition.  This put us under an unusually bright light as the project moved forward, but the homeowners’ support and encouragement kept the extra attention from becoming a burden.  And it didn’t hurt that they had great taste and great eyes for detail.

It may not be a medieval French castle, but it’ll do in a pinch.

Steve Sandalis is founder and president of Mystic Water Gardens, an Encino, Calif.-based design/build firm specializing in custom streams, waterfalls and ponds.  Sandalis founded the firm in 2000 after several years of pursuing watergardening as a serious hobby.  Since then, he has immersed himself in arts and crafts of watershaping and currently designs and installs highly detailed features for a range of mostly residential customers across the United States. A native of Commack, N.Y., he began working in the construction trades as a child with his father and uncles – all of them contractors in the area.