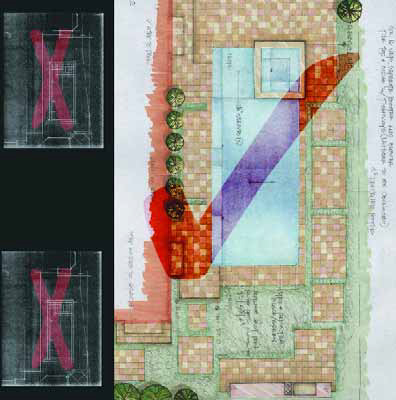 Where you’ve come from often has everything to do with where you’re going. As a case in point, let me describe a project that had its origins all the way back at the very start of my work as a watershaper.

My pool industry career began soon after I graduated from college. At the time, I was living in a garage in a rough part of Los Angeles and really wasn’t sure what I wanted to do. I had studied ancient history, three-dimensional design and industrial design and had been accepted as a PhD candidate in pharmacology at the University of the Pacific. I was convinced I wanted to be a designer, but I wasn’t sure which field I should enter.

Then one day, at a time when I was about as broke as an organ grinder without a monkey, I answered an ad in the newspaper looking for an artist. I went to the offices of a well-known pool company and showed my portfolio of designs and drawings. They seemed impressed and asked me to call back the following Friday. When I did, the owner he told me that they weren’t going to hire me. When I asked why, he said they thought I was over-qualified.

By this time, the pay I demanded wasn’t such a big issue: They bit the bullet, and I went to work. Within a few months, I was so in love with working with water that I knew that this was the type of design work I’d been meant to do. Within 18 months I was doing the design work, pulling the permits, running the jobs on site and the subs were all talking to me and not the owner.

I tied steel, shot gunite, flashed concrete, set tile – and even had a concrete hose explode on me, covering me in concrete and burning me in the bargain. I learned from the inside out that it wasn’t about selling but about doing quality work and executing gorgeous designs.

That’s how I became a watershaper – and now, some 30 years later, I’m still at it.

One of my projects with the company was for a client who lived in West Los Angeles on a beautiful hilltop property. As was (and is) too often the case, the owner and salesperson degraded the project to lower the price, meet the stated budget and win the contract. The client never even had a chance to consider stepping up to the design I’d prepared.

Without hesitation, the owner and salesperson quickly downgraded the materials, gutted the deck treatment and compromised in several other areas – and it was at this point that I began to see that to do projects the way I wanted, I would have to go out on my own. Before long, that’s exactly what I did.

Fast forward to 2002 and my objective in relaying this personal history:

At that time, I was called to the same neighborhood where that long-ago project had been completed to evaluate a possible renovation project. When I walked into the backyard, I could see right away that the existing pool was out of the ordinary: hard lines, an interesting contemporary shape and a style that was unusual for a pool of its vintage. I didn’t recognize the name of client, but when he told me that he had purchased the home three years earlier and told me the name of seller, it dawned on me that this was the pool I had designed all those years ago.

I told the homeowner the story and explained that I hadn’t recognized it because it hadn’t been built as designed – and that there were several things I would have done differently. Recalling my original work, I explained that I would have done the decks in bluestone with a large geometric pattern and described a range of details that hadn’t made it off the drawing board.

So we tore the pool apart, remodeled it and essentially reinstalled the entire pool more or less as I’d originally designed it.

Directly across the street from this client lived a structural engineer who came over to look at the work almost every day. He eventually explained that he and his wife were thinking about putting in a pool and asked me to come and have a look.

They’d talked with several builders, he told me, and let me know that the price I’d quoted was fully 40 percent higher than the next-closest bid. But as an engineer who understood the differences between quality and substandard construction, he knew he wanted me to do the job – design, construction detailing and project supervision.

We went ahead with the project, and as is so often the case, I became friendly with these clients – had dinner with them on several occasions, met the kids, shared good bottles of wine and generally came to know each other pretty well. And all the while, I was delighted by the fact that I had landed two wonderful projects as the direct result of a design I had done almost three decades earlier.

As the second project moved forward, I met a friend of the engineer’s wife, an expatriate Frenchman who ran a salon in West Los Angeles. She told me that while she was getting her hair styled, he’d told her of his frustration with pool builders who couldn’t seem to understand what he wanted.

I was leaving on a trip to the east coast when the call came from the third client in this chain of contacts. We made an appointment and, when I returned from my trip a few days later, I paid him a visit. He had already purchased two sets of plans (one for $300, the other for $800) from local builders and was so disgusted with both that he demanded his money back. (One builder complied.) 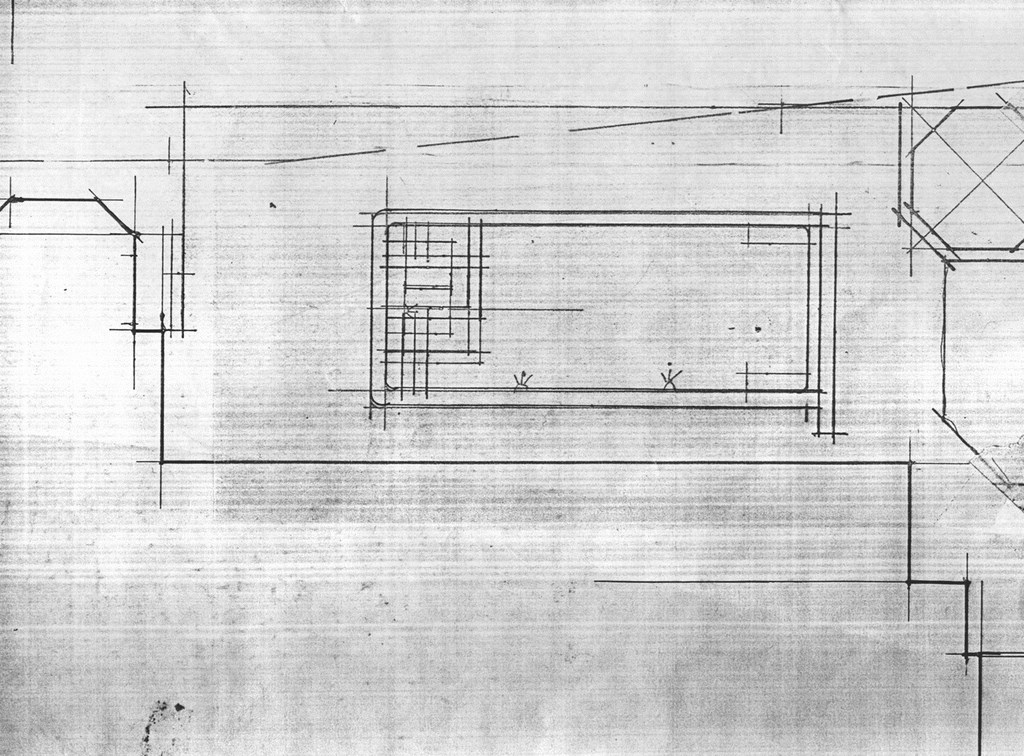 One set of plans was just horrible. It looked as though it had been prepared by a kid who’d spent maybe a week in a high-school drafting class: The scale wasn’t just wrong, it was as though there wasn’t any scale at all, and it had been drawn in #2 pencil and on bond paper without any sense of dimensionality, smudges and all.

I looked at the other set of plans and was even more stunned by the inadequacies. It proposed raising the bond beam by two feet, with no apparent consideration of the fact that the pool’s deep end would then be ten feet deep. The plans also called for adding a vanishing edge to the existing pool, but there was nothing there to indicate how it was to be attached to the existing beam.

Please understand: I’m not saying that every pool salesperson or contractor must be an engineer. Instead, what I’ve been saying for years is that people involved in these processes need to understand basic construction principles well enough to accommodate the practicalities of the designs they offer and have some idea of how they will be built. Otherwise, it’s a slippery slope toward poor work, blown budgets and angry clients.

This second set of plans also included a sunken barbecue area that would require four-foot retaining walls and decks done in concrete with no indication of expansion joints. Furthermore, the soil was uncompacted fill, but the plan specified zero by way of structural measures to accommodate the inevitable soil expansion and movement.

Most amazing of all, this particular builder had told the homeowners that the remodel would save all of the existing plumbing. How he expected to make that undersized plumbing work with a vanishing edge is way beyond my understanding. Bottom line: This was a design bound for failure.

Fortunately, the clients were sensible, sophisticated people who, although they didn’t know anything about swimming-pool design or construction, picked up on the thought that there was something wrong with the plans they had received.

They may have been saved by the fact that both presentations were wholly inadequate, but they were probably also cued into the problems by the fact that neither design did anything at all to capitalize on a fabulous setting and a great view. The remodeled house was a bold apricot color trimmed in white, its interior has lots of granite and limestone and the cabinetry was all done in fiddle-back maple – very contemporary, very colorful and incredibly expressive.

The one fly in the ointment was the existing pool, which became something of an embarrassment once the house itself had been upgraded. The oddly rectangular design was ordinary, even crummy by today’s standards. The plumbing was too small, the lights were in the wrong places, the steps were all wrong, the safety bullnose coping was ugly, the waterline tile was drab and the plaster was plain white. The rest of the space was a mess as well, particularly the loathsome sets of steps that led from the back of the house into the yard.

I sat down with the client and we talked about the possibilities for a good hour or more. He asked me to return three days later, when his wife would be home from a trip, and I came with materials I knew would work, including a gorgeous gold travertine and two glass-tile blends. They liked what they saw, wrote me a check and said, “We need to start.”

I generated architectural plans, a detail of the spillways in perspective and laid materials out on site for everyone to see. We had dinner and talked at length about the details I wanted to include in the pool.

Briefly, what we agreed on was the addition of a square spa at one end of the pool, cantilevered over the existing pool shell (which, incidentally, required a special structural section). We’re also completely reworking access to the pool from the house, adding steps that run the length of the pool’s interior and changing the configurations of the existing corners.

We’ll also be making the pool much shallower, redoing the lights and setting up a large thermal ledge and umbrella stand next to the spa. The spa’s dam wall will have 11 one-inch spillways, and we’ll be installing gorgeous deck pads clad in travertine to create sculptural step/landing treatments leading from the house to the yard.

Next month: getting down to construction.