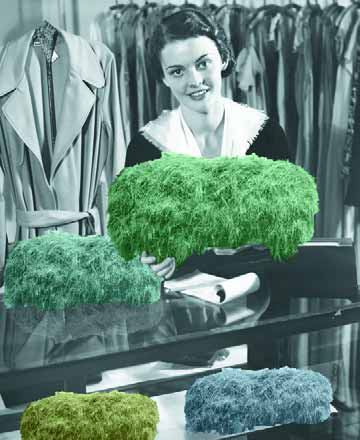 Last month, we discussed ornamental grasses and their place as the most natural of all companions for watershapes. Now it’s time to look at a few of your grass options, including something for just about every need and taste.

Ornamental grasses come in such a wide range of sizes, climate preferences and colors that there really is at least one choice that will work in any client’s yard. With so many choices, I’ll have to narrow the list down to my personal favorites here. I’ll also be suggesting some plants that aren’t traditionally considered to be ornamental grasses; these are some “grass-like” plants I use as required to meet a particular design’s needs.

As always, I recommend checking your local garden guides for selections that will do well in your climate and zone. I also must mention that while the list below covers a lot of ground, it doesn’t include all the great grasses you can find with a bit of hunting. These are my favorites:

[ ] Ophiopogon planiscapus ‘Nigrescens’ (Black Mondo Grass). I’m a huge fan of contrast, and this unusual selection stands out against any other foliage. Its narrow black leaves grow no higher than about nine inches tall and typically stay within a one-foot radius.

It can be used in mass as a ground cover or as a filler in a spot that needs something to break up a flat design. People will definitely notice this plant in any setting, particularly when it’s placed next to blue or very light-colored foliage, and the great contrasts it sets up make it a conversation piece in any garden.

[ ] Ophiopogon japonicus (Mondo Grass). This is a great ground cover for slopes as well as flat areas. The regular variety forms dense clumps that, in my opinion, can start to look unattractive over time. It can, however, be dug up, easily divided, and spread out to cover a larger area.

I particularly like the dwarf varieties. They grow quite slowly, do not overgrow and can be used as a very low ground cover. Planted close together, they create a dense blanket that stays dark green throughout the year.

I’ve also used Dwarf Mondo Grass to partition off diamond-shaped plots in a formal herb garden. You can get very creative with this plant, drawing lines or shapes with it to define many design features.

[ ] Liriope spicata ‘Silvery Sunproof’ (Variegated Liriope). I discovered this gem while filming an episode of “The Surprise Gardener.” I was designing and installing a very shady garden and needed to demonstrate how shade gardens can have lots of color and contrast.

The nursery was completely out of at least half the plants we wanted. When I spied the Variegated Liriope, I knew we’d been saved. It grows particularly well in a shady environment, and because its leaves are light green with stark white variegation, it stands out in the shade, giving the appearance of a dappled light shining through the trees.

Variegated plants are always a great way to brighten up a shady area. Although Liriope is not really considered an ornamental grass, its shape enables it to substitute for grasses in an area where you’d hoped (as we had) to plant a grass. There are non-variegated varieties, but this one has been my ongoing favorite. It has a mounding form that stays below a foot in height.

[ ] Festuca ovina glauca (Blue Fescue). I grew up with Blue Fescue in my front yard and swore I hated the stuff. As with many other things in my life, however, I’ve learned to eat my words gracefully. Along with Blue Oat Grass and some of the other blue-foliage selections, this is one of the best contrasting foliage plants out there. 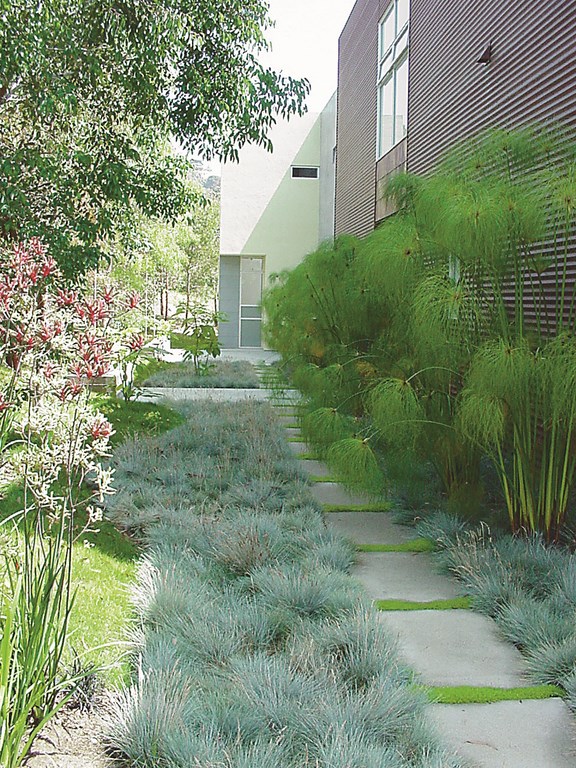 A low grower, Blue Fescue is a great filler or massing plant, and you can place it next to almost any plant for contrast. It makes a great ground cover, growing no higher than about nine inches, and can be used in the same ways as Mondo Grass or Dwarf Mondo Grass. It sends out a wispy, oat-like “flower” stalk. These flowers are actually interesting for small arrangements.

[ ] Helictotrichon sempervirens (Blue Oat Grass). This grass is so similar in appearance to Blue Fescue that you might be hard pressed to tell them apart. And they’re actually great companions, with Blue Fescue best for smaller spaces and Blue Oat Grass preferable when something slightly larger is needed.

Blue Oat Grass averages two to three feet in height and spreads to about 18 inches, with flowers that look almost identical to those you see with Blue Fescue. As with other non-green foliage plants, it creates striking contrasts against other plants.

It’s a nice addition to any style of garden. Although it comes in quite a few varieties, I prefer the smaller ones that peak at three feet. The blooms are similar to those of other larger grasses, with feathery plumes atop tall stalks.

[ ] Imperata cylindrical ‘Rubra’ (Japanese Blood Grass). It’s often difficult to find great plants with red foliage, so this particular plant is quite a standout in any setting. Usually growing to about a foot tall, its striking red foliage is a great contrast against any other plant.

Placed next to gray, blue, or other light toned plants, it even becomes a focal point in a design. The one drawback of this grass is that it’s deciduous and dies back in the winter. To avoid gaping holes in a garden, I suggest planting Japanese Blood Grass where it’s withering stalks will be hidden, such as behind a small boulder.

[ ] Cyperus (Papyrus). This is one of the most important plants in the kingdom. Not only is it a great-looking specimen, but it has also been used for thousands of years to make paper. Its tall stalks are crowned by wispy pompon-like plumes and add height and dimension to a design.

Papyrus grows well in swampy conditions and in well-watered gardens, so it’s often used to lend a natural touch to ponds and other watershapes. You can use the regular variety, which grows to between six and 10 feet in height – or, for a smaller area, a dwarf variety that will stay around the two-foot mark. In either case, its unique shape makes it a departure from the other grasses.

[ ] Pennisetum (Fountain Grass). Although it’s most often seen as a roadside staple in California, Pennisetum is quite useful in many gardens. It’s probably one of the best-known grasses, growing to three or four feet in height and spreading to cover about five feet over time.

I particularly like the “Rubrum” variety, with its bronze/burgundy foliage topped by tall stalks and feathery beige plumes. It’s best used in smaller proportions in a garden, as its dark foliage can overwhelm a design if overused. I like to mass it in spots, bordered by green-leafed plants. Or, for something more dramatic, try framing it with gray foliage plants.

Many Pennisetum varieties self-sow very freely , so try finding the more sterile varieties (check with your nursery and ask lots of questions). And for winter, instead of shearing the plants to the ground, try thinning out dead or withering stalks to avoid the appearance of overpruning.

[ ] Miscanthus. This is another of the great standards of the grass family. Its height and blooms combine to give it a strong presence in any garden. Growing as high as 10 to 14 feet and eight to 10 feet wide, its stalks often droop, giving it something of a weeping appearance. You will find a range of varieties in foliage color and flowers from which to choose.

Miscanthus also makes a nice winterscape plant in many climates. Most varieties are deciduous and in warmer climates they might winter over. But in colder climates, the foliage often turns brilliant colors before dying to the ground. Do your homework first, experimenting with an unusual variety to add a unique touch to a watershape.

[ ] Juncus (Rush). One of the fun members of the grass family, juncus is a very commonly used plant inside watershapes. The corkscrew variety looks like a bad curly hairdo and definitely becomes a conversation piece in any pond.

Juncus differs from most other grasses in that its “leaves” are narrow reed-like structures, similar in shape to chives or onion greens. It typically varies in height from two to four feet. Many varieties are upright, but corkscrew juncus flops all over the place – yet in a small enough area that it can be kept in check.

[ ] Cortaderia selloana (Pampas Grass). Best saved for a large area where it can spread out and not touch (and injure) passersby, this giant grass is used in many natural plantings. Its long, narrow leaves have delicately toothed edges that can be as sharp as razors when brushed.

The larger varieties can grow to 20 feet tall and 13 feet wide, although I don’t recall ever having seen one bigger than about 12 feet high even with the flower stalks. I particularly like the “pumila” or dwarf variety, which stays below four feet and doesn’t spread out over time.

Interestingly, the large, puffy plumes of pampas grass flowers are one of the most widely used plants in the Tournament of Roses parade on New Year’s Day. It simulates animal fur quite well!