As milestones go, the project depicted in these pages has been a big one for me – and for lots of other people as well.

The grand estate with its outsized home is located in the countryside near Hanover, Pa., a remote setting that offered a set of challenges that has in many ways redefined what is and isn’t possible in a whole region when it comes to watershape design, engineering and construction.

A full two-and-a-half years in the making (a period broken up, of course, by stretches in which there was no activity on site), this stands as one of the most elaborate designs I’ve ever executed – all in a part of the country where the pool industry isn’t set up to accommodate construction at this level, either with respect to the basic construction materials or the skilled craftspeople needed to complete such a job.

A series of “Details” columns have covered all of this in depth (see the sidebar at the end of this article for a complete list of those columns), so let’s move on to a few final thoughts and a selection of photographs.

I am serious in saying that this part of the country wasn’t ready for a watershaping project on this scale, and it’s a tribute to the persistence of my partner, Kevin Fleming, who managed the project through some wild times, and the willingness of numerous craftspeople from across the country who came to rural Pennsylvania to get the work done to exacting standards. 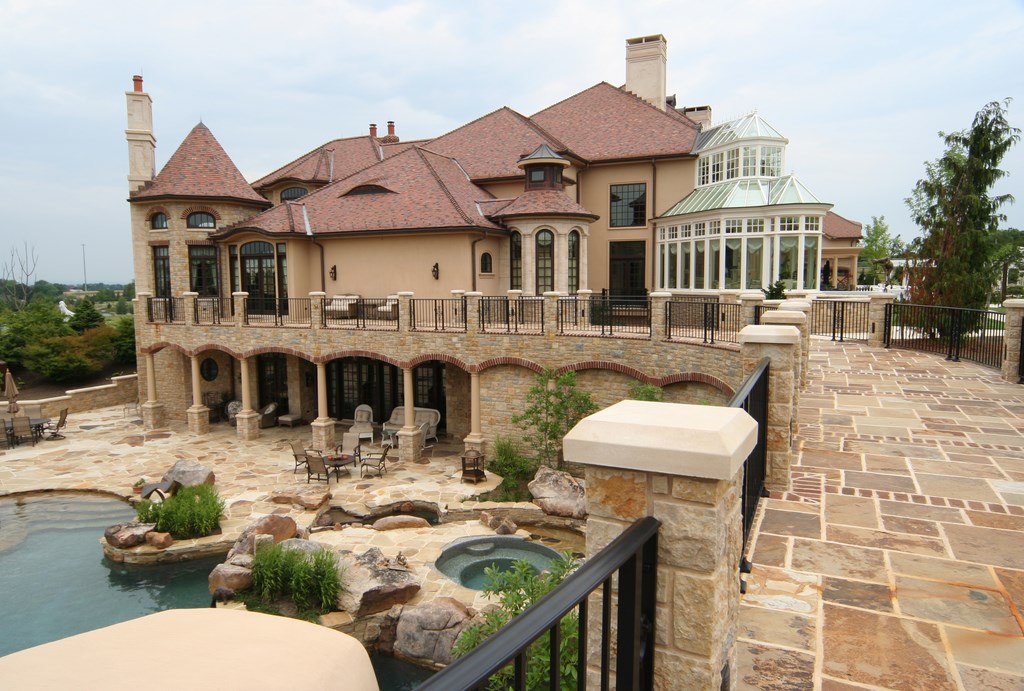 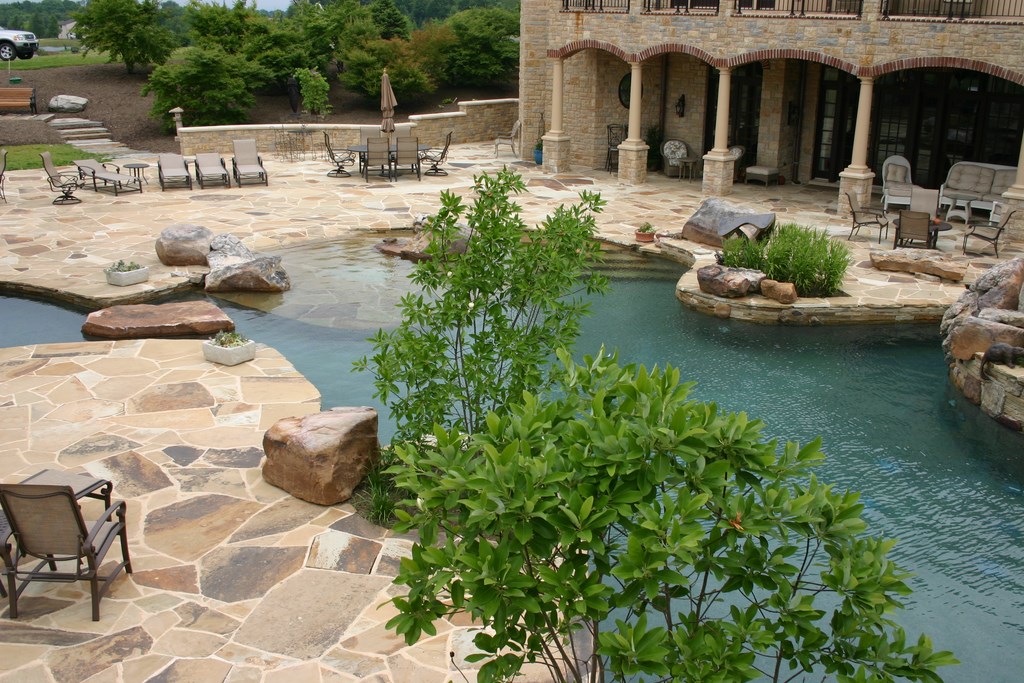 This was the first-ever project for our firm, Liquid Design of Cherry Hill, N.J., and to say we started with a mountain rather than a molehill would be an understatement. It was a tremendous challenge on all sorts of levels, not the least of which had to do with changing what everyone involved with the project thought watershaping was all about.

This is the kind of project I was told over and over again simply couldn’t be done on the East Coast: The market wouldn’t bear it and, besides, freeze/thaw conditions would make favorite details of mine (such as all-glass-tile finishes) virtually impossible. I don’t think my motivation in tackling the job was particularly to prove anyone wrong, but the adventures we had in gathering materials, getting them to a remote site and jockeying them toward completion could fill a book. 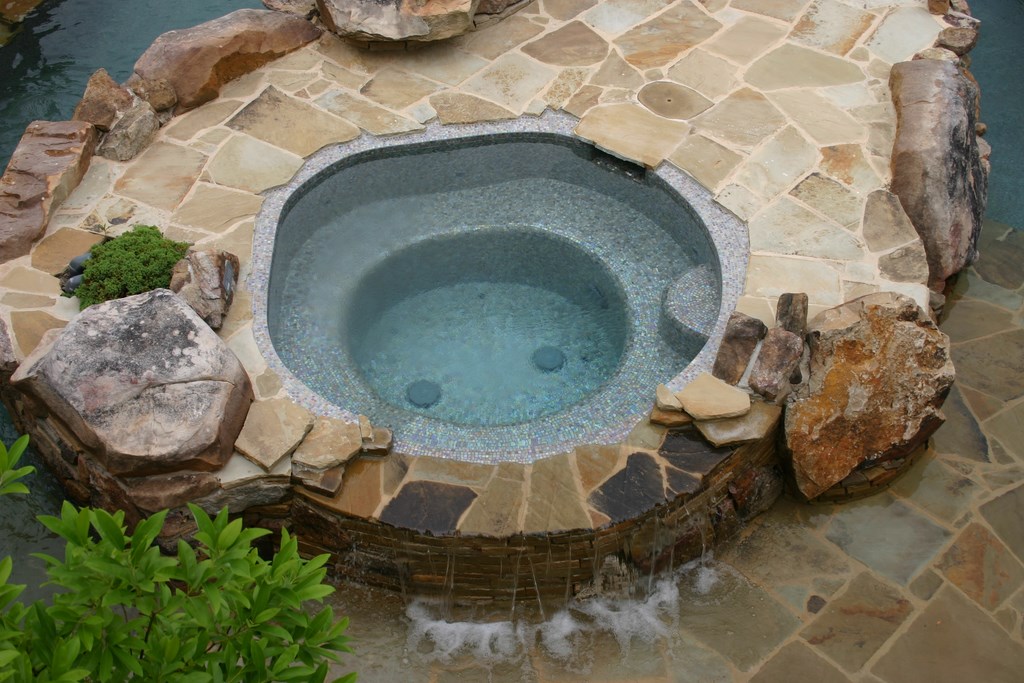 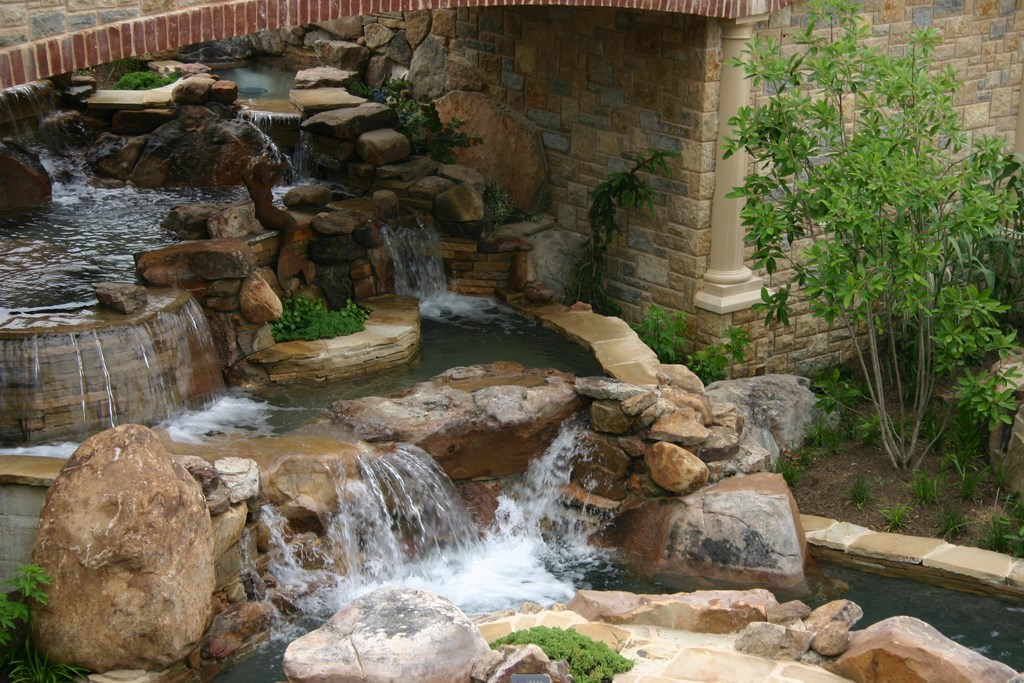 In retrospect, I see this project as an evolutionary step in the region’s approach to watershaping. From the forming of the shell to the selection and placement of the stone, from the hunt for pipe and fittings to the quest for a technician willing and able to start things up, this was a project at a level of execution that constantly astonished other trades working on other parts of the estate project – a level of artistry and dedication to the craft of watershaping that nobody ever seemed to have encountered before.

Nothing I’ve witnessed throughout New Jersey, Pennsylvania and other parts east persuades me that these other contractors were being anything other than completely sincere. Kevin and I were amazed by the fact that the day we started the system up and the waterfall began flowing became a sort of informal holiday on site, with electricians, painters, carpet layers, finish carpenters and all sorts of other tradespeople coming outside just to watch. 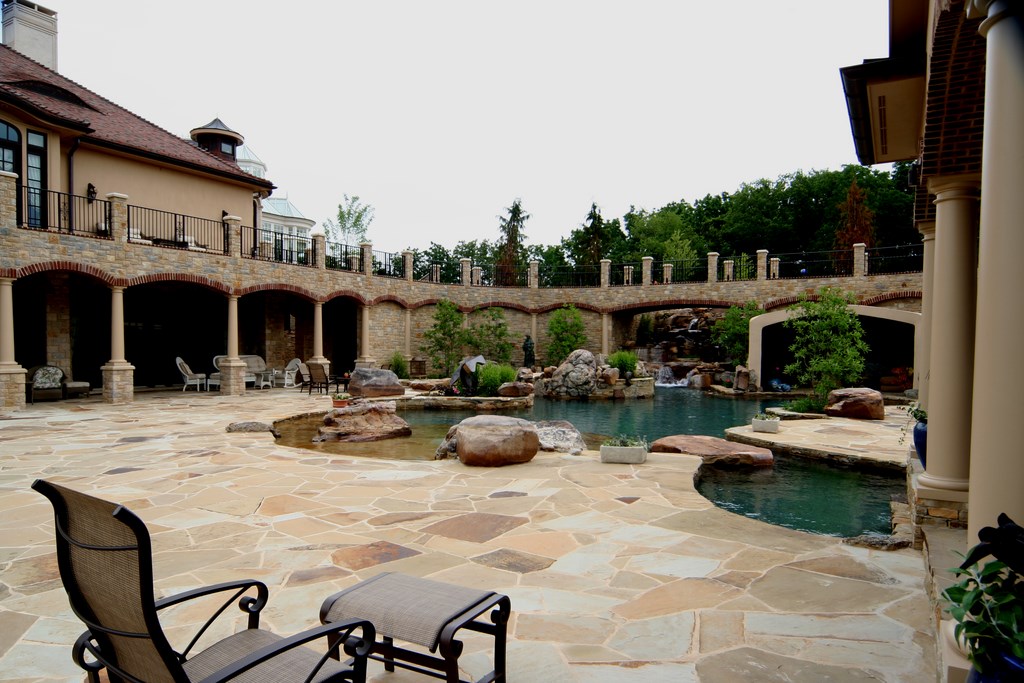 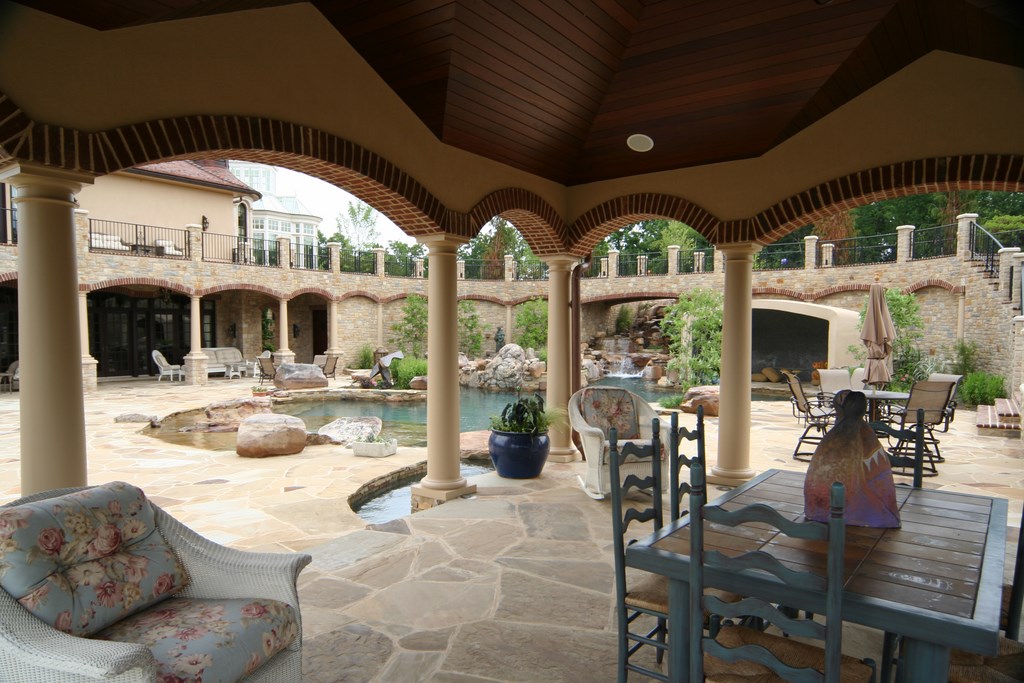 If we needed any affirmation that we were onto something special, this unusual tribute to what we’d accomplished was more than enough.

I’m past the point of bemoaning the sad state of affairs in eastern watershaping (well, for the most part) and have spent the last couple years applying what we’ve learned and developed in the hills of south-central Pennsylvania to new opportunities we’re finding all over the northeast. And it all flows from our having raised consumer expectations about what can be accomplished in their backyards.

As for the all-tile spa, it’s come through a couple of miserable winters without any difficulty, quite as beautiful as the day it was installed. At a minimum, it’s my hope that this project will open more designers’ eyes to use of this material – and encourage local contractors and subcontractors to acquire the training and skills needed to install it properly so I won’t have to fly people in from elsewhere to get these jobs done. 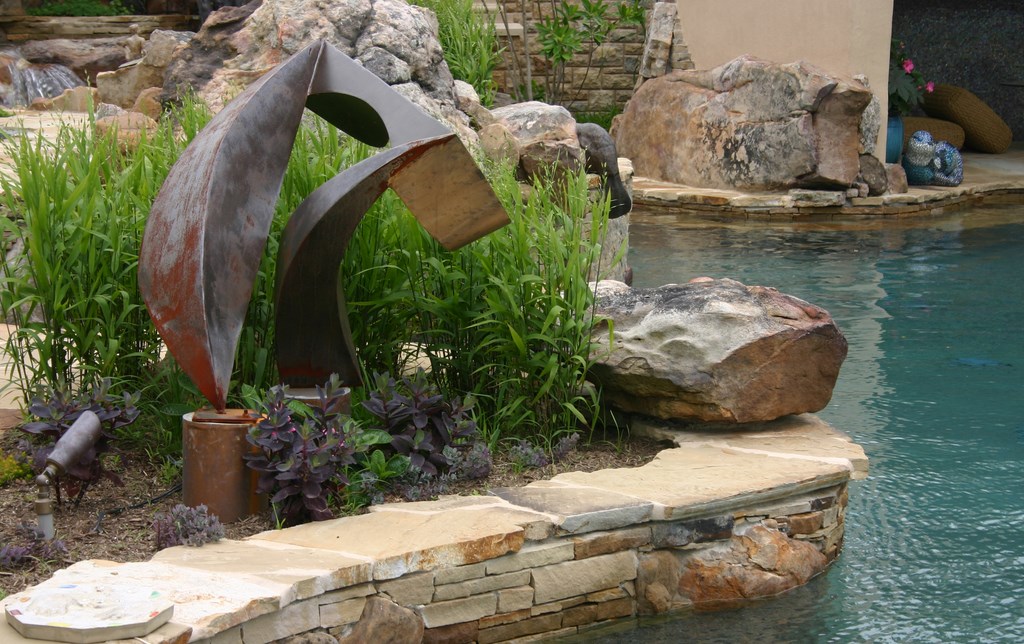 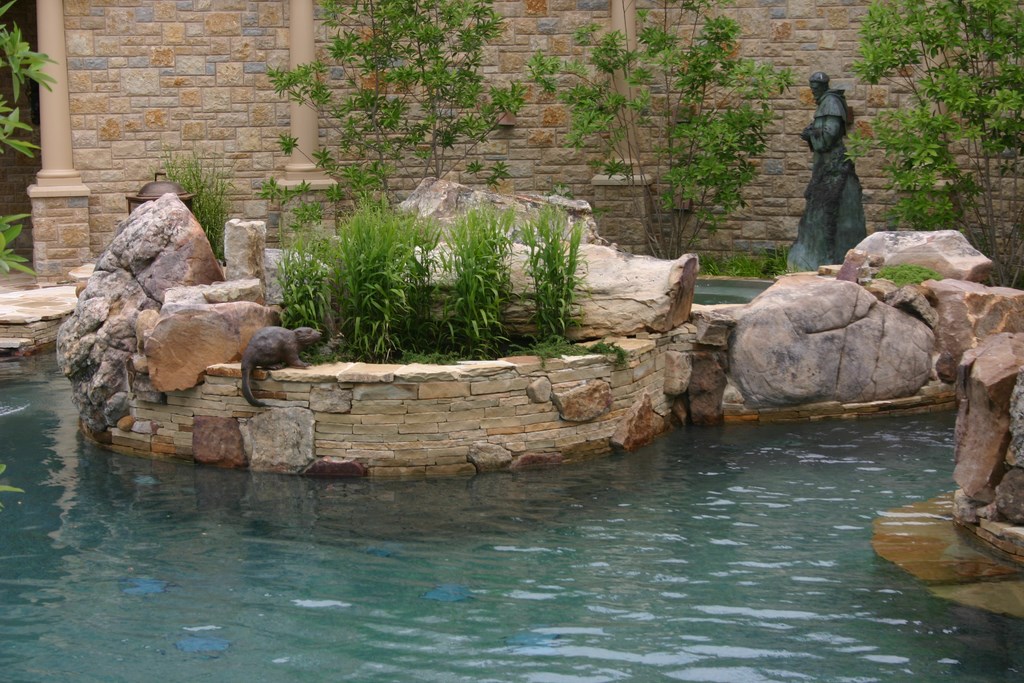 Ultimately, that’s what this project has been all about: forming a cadre of skilled craftspeople who can consistently, repeatedly perform work that exceeds the highest possible expectations for quality. In this project, I think we cracked that door open and introduced large numbers of people to what must be done and the fabulous opportunities that emerge when uncompromising quality is the target.

As a design task, this project was about mastering and deploying color, proportion and line on a carefully measured scale while expressing ourselves and our ideas with great materials and superlative installation techniques. It wasn’t easy by any means, and everyone involved with the project is understandably proud – not the least among them the clients, who just love what has happened to their yard.

We all worked together in smashing design constraints and breaking construction stereotypes, and the best of it from my perspective is the seal this project put on my partnership with my good friend Kevin Fleming : It’s been a shared experience that will carry us well into a promising future.