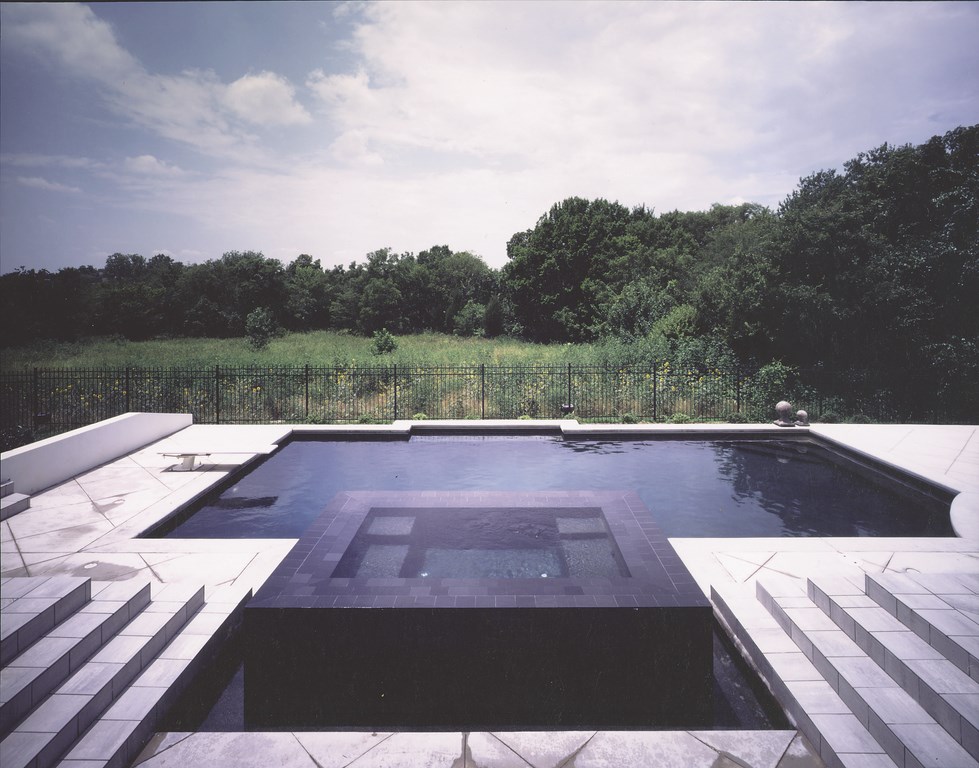 Increasing numbers of our clients are asking for more from their watershapes – so many, in fact, that we’re seeing an unprecedented blurring of the lines between swimming pools, spas and the full range of decorative waterfeatures. This demand is particularly strong in one area: In addition to projects that are functional, our clients want them to be visually compelling as well.

This need has inspired designers at our firm (and elsewhere) to new levels of creativity. In certain instances, we at Leisure Living Pools in Frisco, Texas, have answered the call with spa designs that enable us to provide our clients with all the soothing pleasures of hot water while fully harmonizing these small vessels with the architecture of some of our most upscale clients’ homes.

The four raised vessels pictured here are all topped by 360-degree overflow edges. In three cases, the spas work in conjunction with geometric swimming pools; in the fourth, the spa is used in contrast to freeform designs. We’ve also done projects in which vanishing-edge spas serve as stand-alone watershapes in smaller spaces.

Whatever the setting, we see this as a new breed of hot-water vessels – versatile spas that are reasonably simple to design and build and that invariably have made big impressions on our clients, their families and guests.

These spas are natural offshoots of vanishing-edge swimming pools, a striking design concept that is by now widespread enough that many of our clients have become somewhat blasé about it. As startling as that reaction may seem, and as much as they’re telling us they like the vanishing-edge concept, these clients want us to take the next step in the evolutionary process and come up with something that once again stands out from the crowd.

Our response in many cases has come in the form of a vanishing-edge spa. This design enables us to take advantage of the mirror surface and knife-edge contour of the vanishing edge without worrying so much about the nature of the backdrop as we do with swimming pools and whether a given setting lends itself to the use of a spillover effect.

In most cases, we’ve set them up as either perfect squares or circles and finished them in dark tile, which gives the entire spa structure a distinctly sculptural appearance. That’s just what our clients are after: a sculptural focal point that draws the viewer’s eye into the outside environment from inside a home – something that’s dramatic, but not overwhelming.

It’s a simple twist on an established effect as well as an elegant solution that gives our clients that “something special” they all want these days.

This project demonstrates the flexibility of the vanishing-edge-spa design. Here, the spa is mirrored by a waterfeature at the other end of the classically inspired pool and Mediterranean-style courtyard. 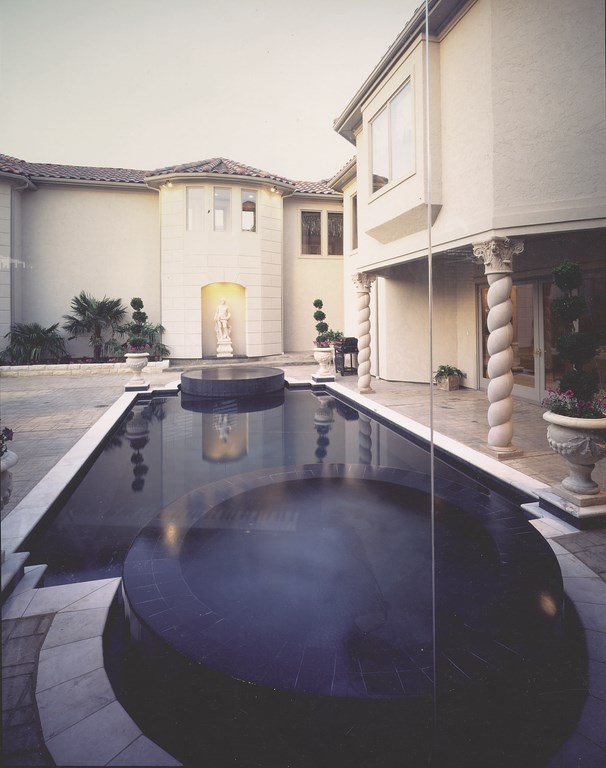 In this case, the designer wanted the entire watershape complex to work as sculpture, as something that would immediately capture the eyes of guests entering via the front door and draw them outdoors to see more. Once outside, it’s easy to see how the components relate to one another, from the circular spa and waterfeature to the pool’s radiuses and the circular details at the roofline.

In this project, we were after an extremely modern look for a dramatically contemporary setting – and found it by making this dark cube seem to erupt from the light, acid-washed concrete decking that surrounds it. 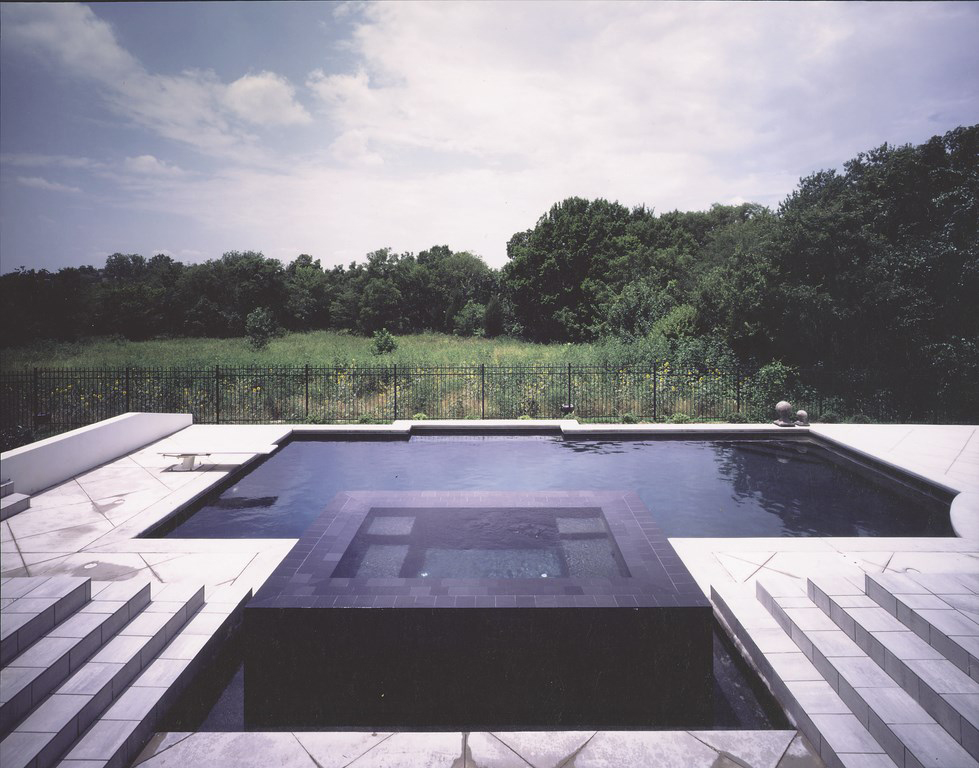 Broad stairs descending from the back of the home to the pool deck essentially surround the spa, bringing the viewer into close proximity with the reflective surface of the water from a variety of angles. And all of this sharp modernity offers a striking contrast to the greenery lurking beyond the property line.

For this project, the homeowner wanted the spa to work as a central visual element in the design – and a spot from which to enjoy a prime view of the adjacent golf course. 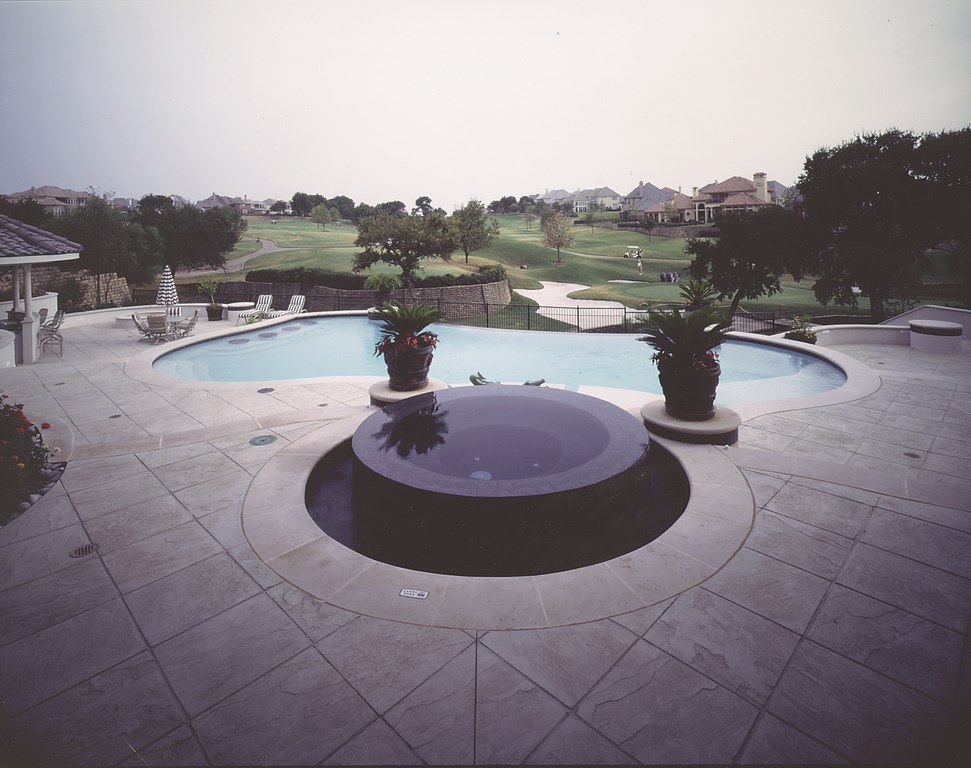 Here, both the spa and the pool have vanishing-edge details, but the sculptural quality of the dark spa amid lighter decking and the bright pool finish makes the two vessels quite distinct from one another – thus fulfilling the client’s desire for a truly functional beauty. We also enhanced the sculptural effect by mimicking the spa’s shape in pedestals and tables scattered around the terrace.

Here, the square vanishing-edge spa enabled us to add a dramatic visual touch to what is a very compact backyard space.

I have to mention it once again: These vanishing-edge spas offer a unique sculptural quality and a uniform reflective surface that adds much more finesse to a setting than would an ordinary (and merely functional) raised spa.

Tom Moneta is president of Leisure Living Pools, a high-end custom swimming pool design and construction firm based in Frisco, Texas. He founded the company with his wife Joyce in 1980, with the goal of emphasizing overall backyard designs that include decks, arbors and fences in addition to watershapes. The company has been recognized both nationally and locally with a variety of design awards: In 1998, the National Spa & Pool Institute gave the company its Technical/Engineering Achievement award. Moneta has participated in the Genesis 3 program, has served as member of the national board for the National Spa & Pool Institute and is past chairman of NSPI’s Builders Council.