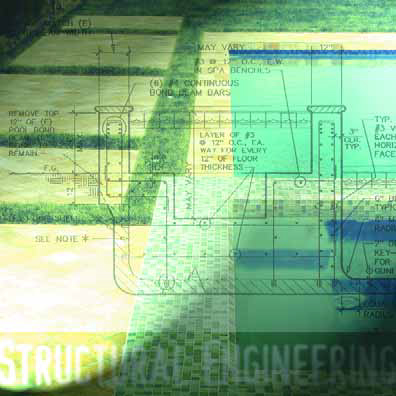 Let me make an important point: As interesting as some of the details I discuss in these columns may be, many of the more significant ones wouldn’t have any substance or value to my clients without the contributions of one very important person: my friend Mark Smith of Tarzana, Calif., whose firm takes care of my structural engineering.

I’d go so far to say that he and his staff are critically important external members of my design team – professionals who know more than I will ever know about steel, concrete, tension and compression.

Every single project I design and build is fully, individually engineered, and I refuse to make any assumptions on my own about what might be needed in a set of plans to create a sound structure. If any builder anywhere thinks that he or she knows enough to get by without support from a structural engineer, well, that’s just asking for trouble. When it comes to engineering and construction practices, and I’ll never hesitate to sing Smith’s praises – or call on his expertise.

Not all structural engineering services operate at his level. He’s an architect who knows about engineering, codes and building practices. On his staff are Jay Schniderman, a civil engineer who’s been with the firm for more than ten years; and Ron Soderstrom, who runs the production department and has been with Smith for more than 20 years. They know pools inside and out and approach the work with an incredibly helpful measure of creativity.

I know what I don’t know, frankly, and I sleep well at night knowing that my plans begin with their work and always move forward with their ongoing support. One of the big areas where builders who don’t work with competent technical support will often lose their way – and rightfully should be losing some sleep – comes when they do their own “engineering” with remodeling projects.

Time and again, I’ve seen builders add spas to swimming pools (one of the most common of all remodeling requests) by simply doweling a few pieces of steel into the top of the bond beam and then building a spa on top of it. Anywhere from six months to six years later, such a spa will almost invariably crack. Most often, the problem is that the builder didn’t allow for the proper overlapping of steel from the existing structure or, even worse, relied exclusively on a bit of doweling. 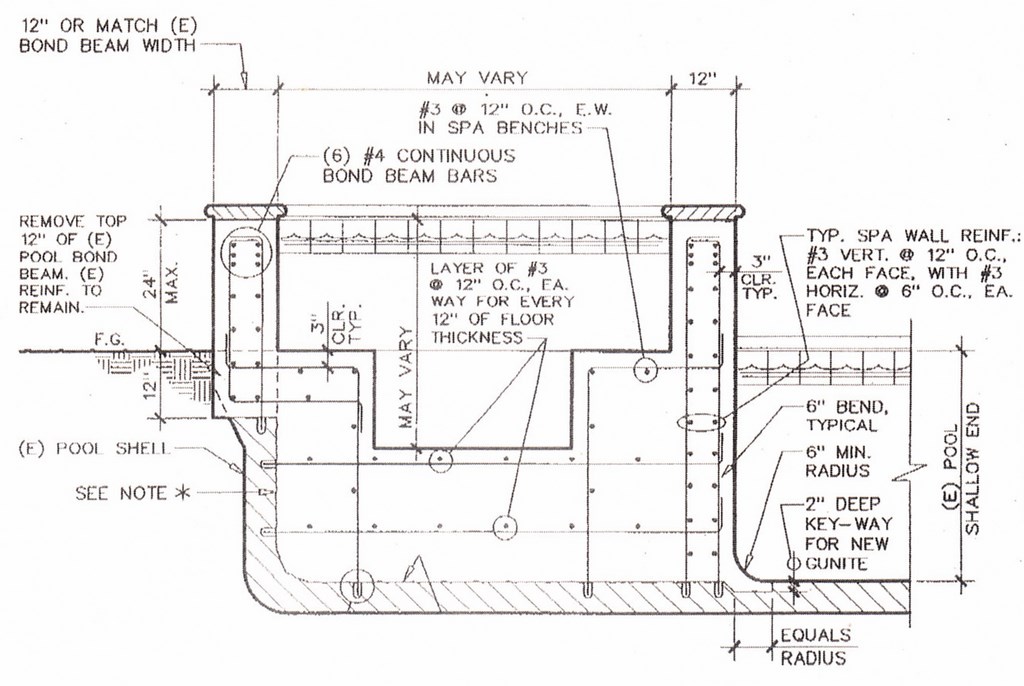 Adding something like a spa to an existing structures isn’t that tricky if you have the right plan and stick to it during construction. I guess it’s this simplicity that inclines builders to approach the work too casually, but I’d argue that this is a case where good structural engineering not only makes for sound construction, but is also critical to making any sort of strong visual statement.

Nowadays, many of the spas added to pools are simply set inside the existing shells. It’s a nice approach because it conserves space and makes the spa look more as though it was part of the original construction. It isn’t that difficult to do, either.

The problem here is visual: When you pour the new wall for the part of the spa that butts up against the existing shell, the easy way out is to create a portion of the pool/spa wall that will be twice as thick as the walls of the rest of the pool. This creates a visual interruption that, to my eyes anyway, is not the cleanest possible look. 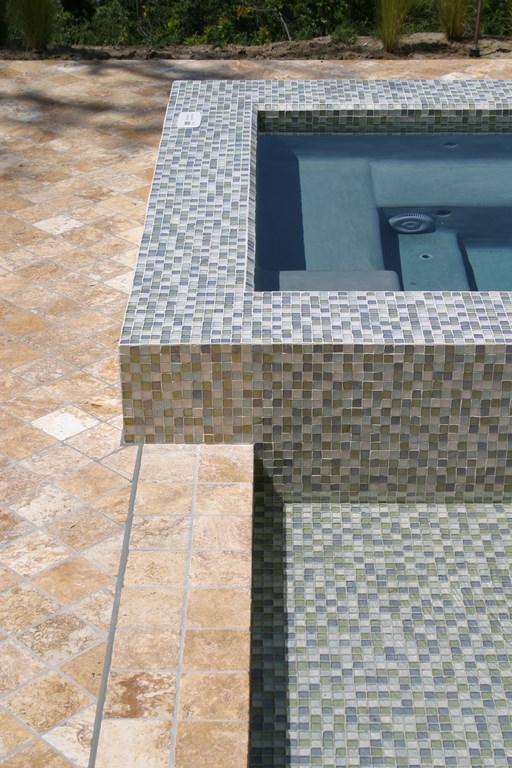 It’s not the only way to go. In the case of the renovation job I began discussing in the May 2005 issue (page 26), for example, there’s a visual option that is better suited to the materials being used inside and outside the original pool and new spa. It’s more complicated structurally, but what I did was cantilever the spa wall over the existing bond beam, thereby preserving the appearance of a wall with uniform thickness. (Such a detail can be used to insert a spa that is either raised above the level of the rest of the pool, or one that is level with the existing body of water.)

It’s more work to do it this way, of course. The first step involves demolition of the top of the bond beam and lowering of the existing wall down to the needed level. That level will vary from project to project, of course, and obviously you’ll take the wall down further with a pool-level spa than you would with a raised spa.

Chipping away the top of the bond beam and leaving it rough (but clean) has the added advantage of providing a good mechanical bond with the new spa wall.

The next step in the process is forming the spa. This has been discussed in a number of my columns and articles and is all about establishing a surface that will withstand the pressures exerted by shooting gunite or shotcrete up against it.

Bottom line: You want to set up forms that are rigid enough that they won’t move when they’re being hit by the concrete. If there’s any wobble or give during the shoot, the forms will vibrate, push away from the steel and encourage voids that will compromise the structure’s integrity – a big problem.

There’s an aesthetic issue here, too: Movement of the forms will create a wall that is visually irregular and misaligned with the rest of the pool, so all the work you’re doing to create an impression of uniformity will be wasted. 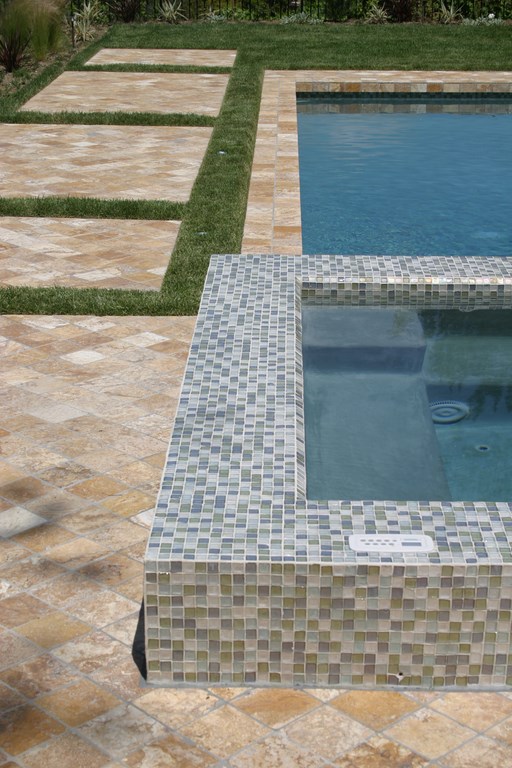 For all of the importance of proper forming, however, it doesn’t mean a thing unless the project is properly engineered. In this example, the engineering details specify the extent of the overlap for the steel between the existing structure and the new spa; the thickness of the floor; and the layout of the steel structure.

This plan rolls forward through the entire construction process, shaping our thoughts about the plumbing and where the lines will run (through new steps in this design) to serve the needs of the new spa. It also sets the tone for the electrical system, spillway design and numerous tile details.

With this information in hand and application of proper construction practices, there’s virtually no chance that the structure will fail, barring some seismic catastrophe. Without this basic engineering, failure is instead the usual outcome. In this case, a cantilevered wall that was created with aesthetics solely in mind is possible only because it could be reliably engineered.

This detail was created for a project that wound up with eleven spillways, a thermal shelf, steps that run the length of the pool and a beautiful glass-tile finish with a mix of green, clear and pale blue tiles. Creating a sense that the structure was monolithic lends visual unity to the watershape and, in the end, makes it appear as though the handsome little spa was part of the original construction.