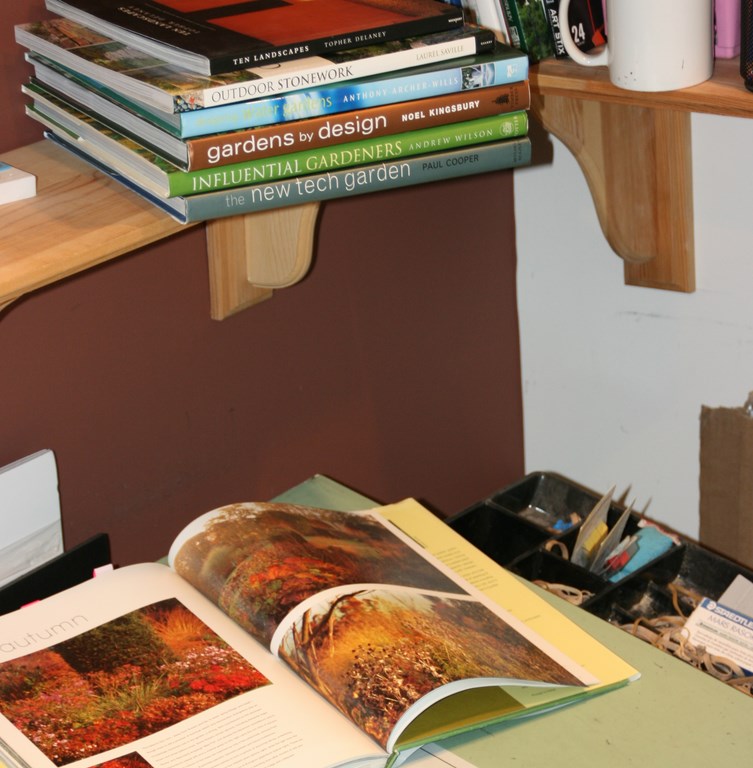 I recently began work on a design for clients who live in a historic home just south of Rochester, N.Y. They’ve asked me to incorporate a pool, entertainment areas, a fireplace and a combined pool house/garage into the available space and make certain it all complements the architecture of the home and its only current outbuilding – a 150-year-old storage shed.

Sitting at my drafting table, I was thinking how easy this one would be, conceptually at least. All I needed was there, from the home’s architecture and an existing (and much beloved) 100-year-old pergola to the old shed, so the main challenge would come in drawing the details rather than in deciding what to do.

Usually, of course, it’s the other way around and

the concept is the thing that sometimes doesn’t come too easily. As I was thinking about this reversal of the ordinary pattern, my eyes drifted to shelves of books that live near my drafting table and my mind to thoughts of all the times I’ve used them to find inspiration, ideas and the spark I need to get my design work on track and keep it that way.

I didn’t need them on this occasion, but it’s such a rare situation that it inspired me to share a dozen titles I see as being a designer’s best friends.

For years now, my fellow WaterShapes contributing editor Mike Farley has provided commentaries on books he finds interesting and/or useful in his “Book Notes” column at the end of each issue. He’s covered some of my Big 12 but not all of them, which is one of the reasons why I wanted to join Mike in his campaign of directing you to resources I think can be hugely helpful.

This list of a dozen titles is just a smattering of the literature of landscape design, construction, engineering and architecture that I surround myself with. They inspire me daily to stretch my boundaries, to consider and reconsider nature and (above all else) to build things right.

The project I mentioned at the outset of this column won’t test my design abilities or lead me to these books early in the process, because I can rely on the home itself to guide my basic approach. There is, however, the distinct possibility that as the design evolves, I may decide to throw a wrench into the works by including a detail that has nothing to do with the home’s style – maybe a bit of colored glass worked into the pool house’s façade? As with all my designs at this stage, it’s on some level a matter of standing back from time to time and seeing what happens.

If I get to that point and need a little inspiration, I know just which books I’ll be picking up and exploring.