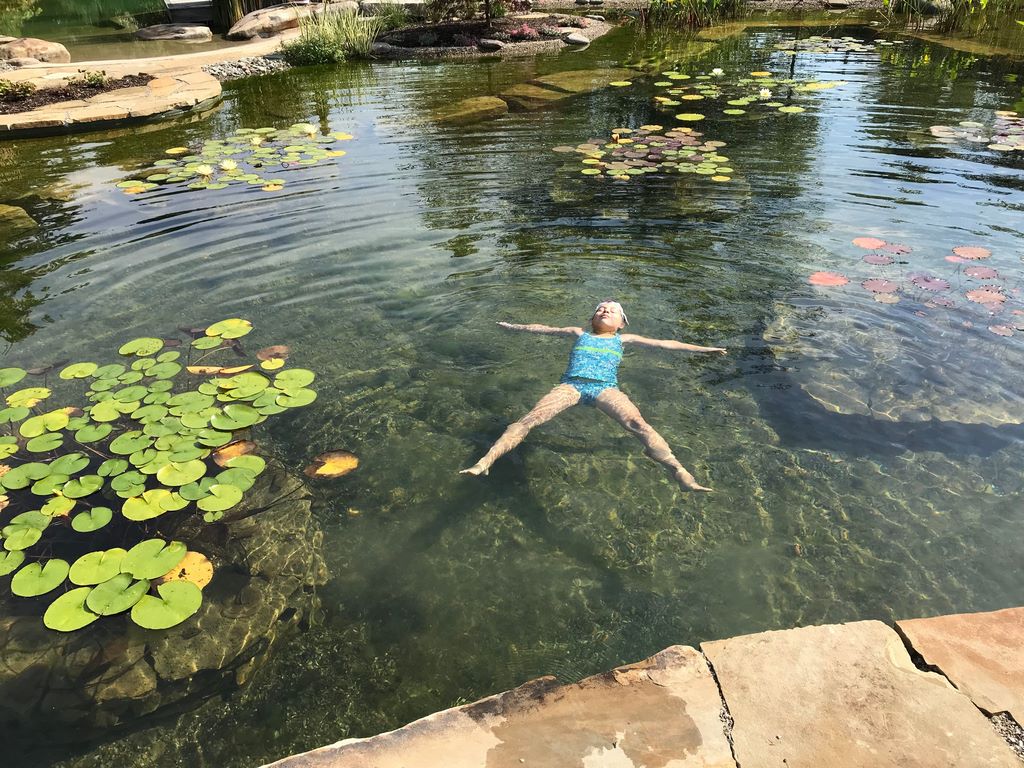 This beautiful project in Princeton, N.J., has always been about innovation. It was one of the first pools by our firm BioNova, built in the U.S. back in 2010.

Although combining plants and swimming pools has been common throughout Europe for over 30 years, the pool was novel in the U.S. market.

Being so unusual, the project garnered a great deal of attention and has served as a strong example of how beautiful these types of pools can be. As built it wasn’t really and truly a Natural Swimming Pool (NSP), but more of one combined with a traditional, chemically-treated pool.

A decade later, we returned to the project and upgraded it so that it is now, in fact, a true NSP – and one that powerfully shows off the concept’s great potential.

Back in 2010, we originally pitched the clients on an NSP, which had never been done in North America at that point. Although deeply intrigued, after lengthy discussions, they decided they wanted something closer to a traditional pool. They still liked the idea of growing plants in the water and reducing chemical use as much as possible. In effect, they wanted to have it both ways, so that’s what we gave them.

At the time, we called it a hybrid, which turned out to be ahead of its time. We used ozone and UV to essentially create an advanced oxidation process (AOP) system, keeping the chlorine levels were so low that some species of plants could grow in the water. And, it worked! For nine years we were able to grow plants and sustain superior water quality. Over time, however, we did start to have more and more maintenance issues, chiefly cloudy water. 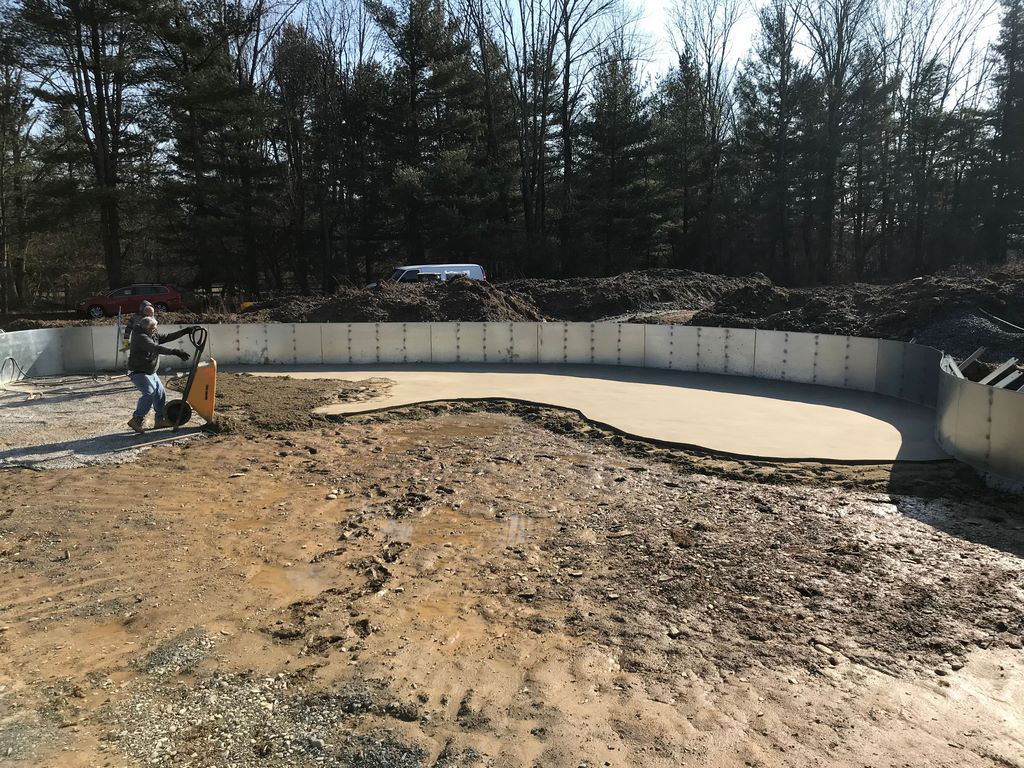 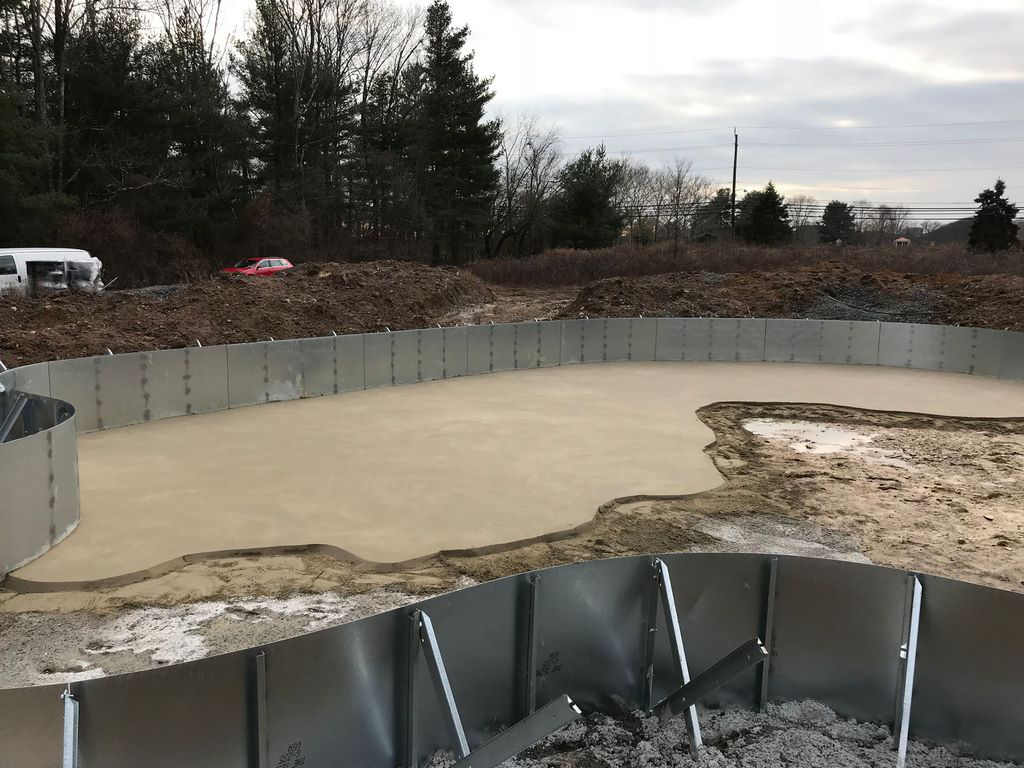 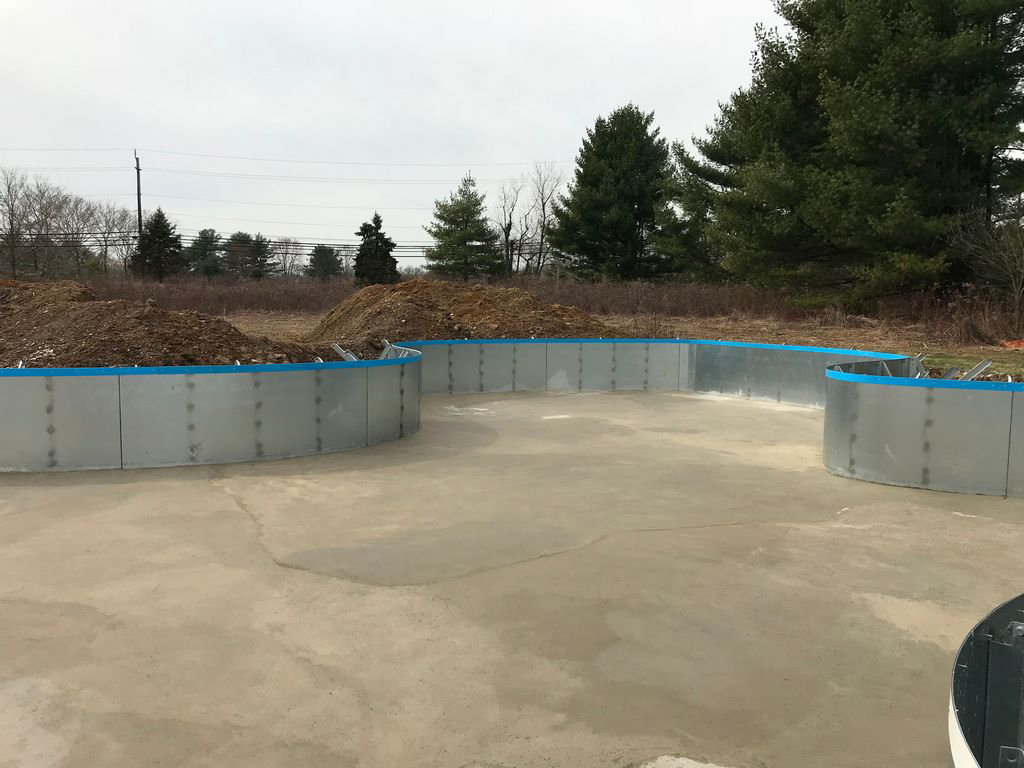 Finally, when the ozone generator died, and when faced with the expense of replacing it, we told the clients that we thought we could do even better with true NSP technology. This time around, they were ready to fully take the leap into biological water treatment.

We knew from working with NSP systems, we could do a better job with biology than you can with chemical treatment. The clients agreed and we moved forward transforming the system into a true NSP. That meant dramatically expanding the pool’s footprint by adding a regeneration zone, meaning an attached pond area measuring over 5,000 square feet.

At that time, 2018, we decided to also bring in a biofilm reactor to further enhance the system. A biofilm reactor is what we call an “NSP in a box.” It is a self-contained structure with internal components that harbor specific types of biofilm that biologically treat water, through a series of complex processes involving beneficial microorganisms, and of course, plants.

There are different ways to set up an NSP. In this case we have both a regeneration zone and biofilm reactor, which together provide dual-level, redundant treatment. We also added two streams that further enhance the natural treatment processes.

One of the things we do with the regeneration zone is use it to essentially prepare the incoming fill water, which has a tremendously high phosphate level in the local area. The plants remove the phosphate before it’s added to the pool, which helps control unwanted algae blooms. 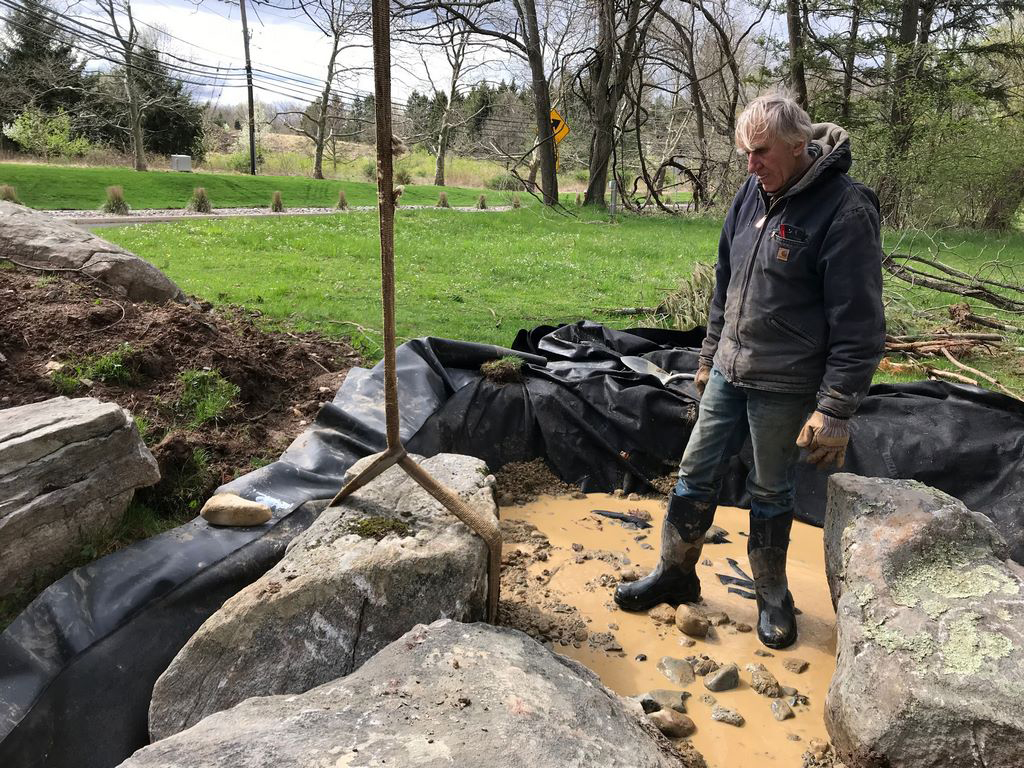 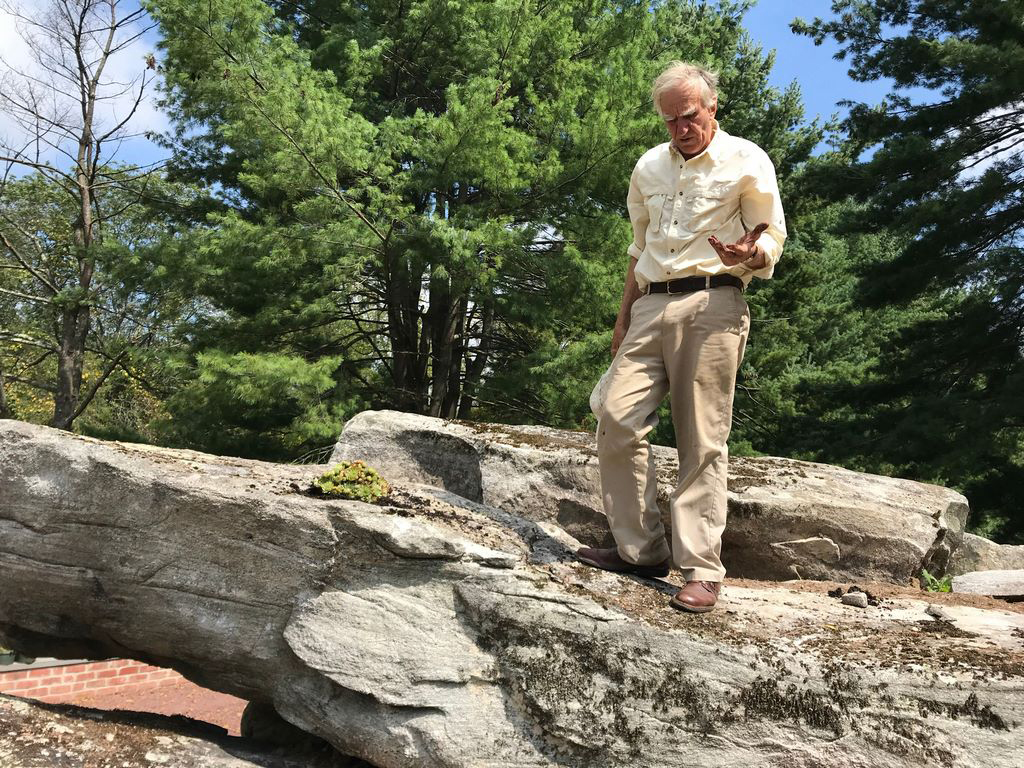 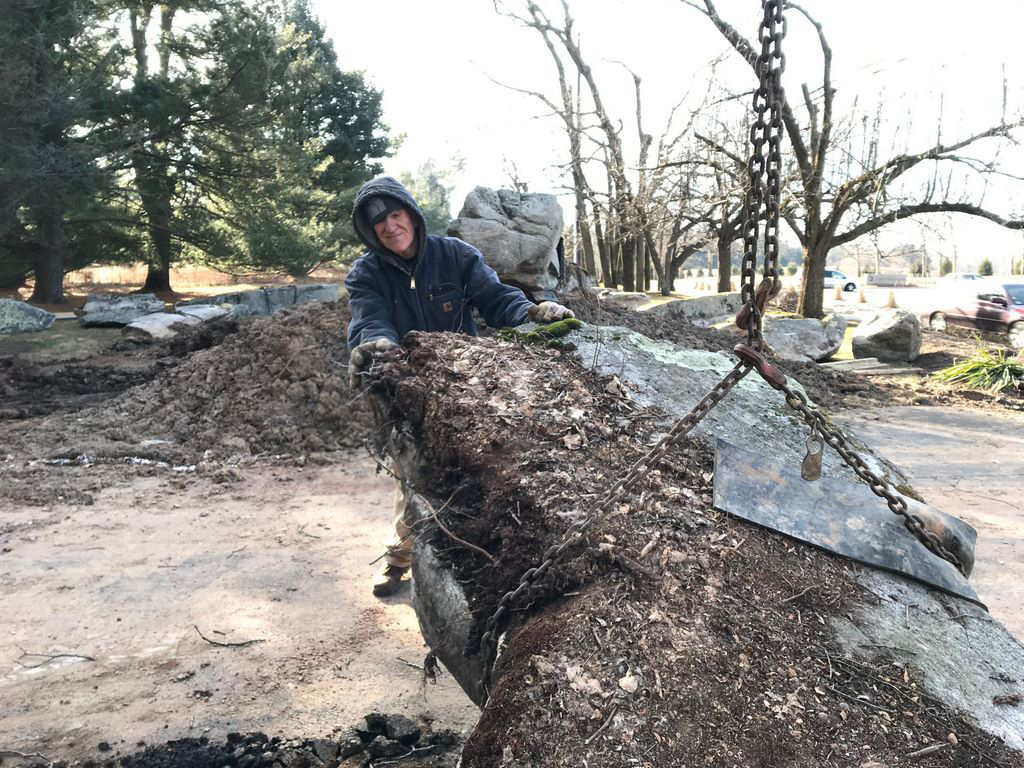 In many NSP systems the regeneration zone is the heart of the system. It can be best described as a water garden filled with specific filtration substrate and flora. Microbes, microorganisms and aquatic plants do the work of removing organic compounds that feed harmful pathogens and invasive algae blooms.

The biofilm reactor handles the primary pool water treatment. While this technology is relatively new to swimming pools, it is widely used in wastewater treatment and other applications. Biofilm reactors are also used in manufacturing to produce products such as vinegar and acetic acid. In pools, they do a spectacular job of removing organic compounds and controlling bacteria and algae.

As mentioned above, the two new streams are also part of the treatment process, one in the front of the property, the other in the back feeding directly into the regeneration zone. It’s fair to say that in some ways, all streams are biofilm reactors and they can be an important part of biologically treated bodies of water. When you move water quickly over rocks and gravel as you do in a stream, biofilm develops and it helps purify the water.

There are differences between the processes in a regeneration zone and inside a biofilm reactor. Biofilm reactors, for example, don’t rely on the presence of zooplankton to control algae and harmful bacteria; but, in a regeneration zone, zooplankton are critical. Combining the two types of treatment, along with the streams, we were able to create a large body of water that has remarkable clarity and overall water quality.

Being “natural” in appearance, stonework is also very important in the design of many NSPs, which oftentimes do look much more like ponds than traditional swimming pools. (We like to think this one looks like a combination of both.)

We worked closely with pond and stream master, Anthony Archer-Wills, who worked his magic creating the naturalistic streams and giving the entire scene a sense of natural narrative. 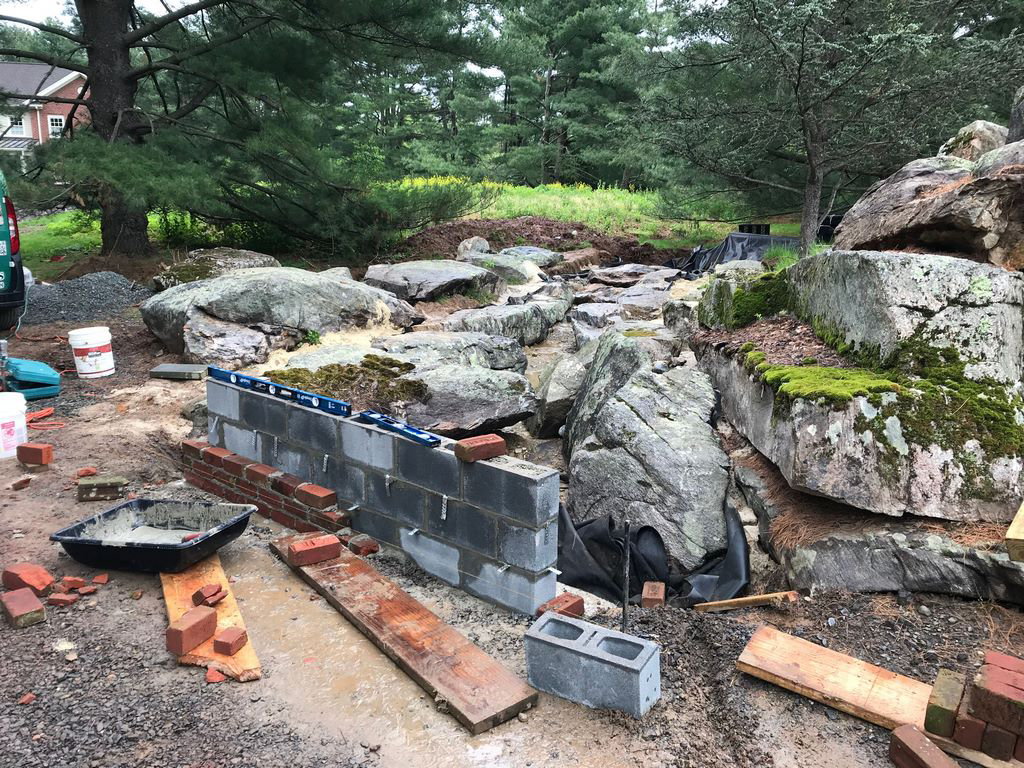 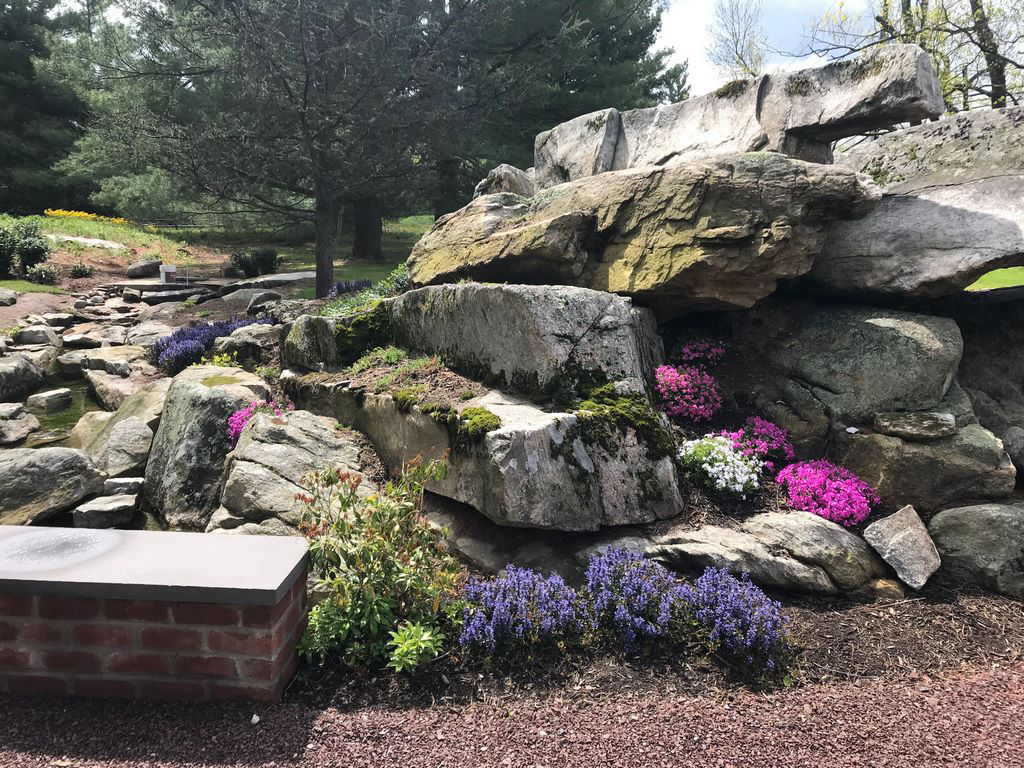 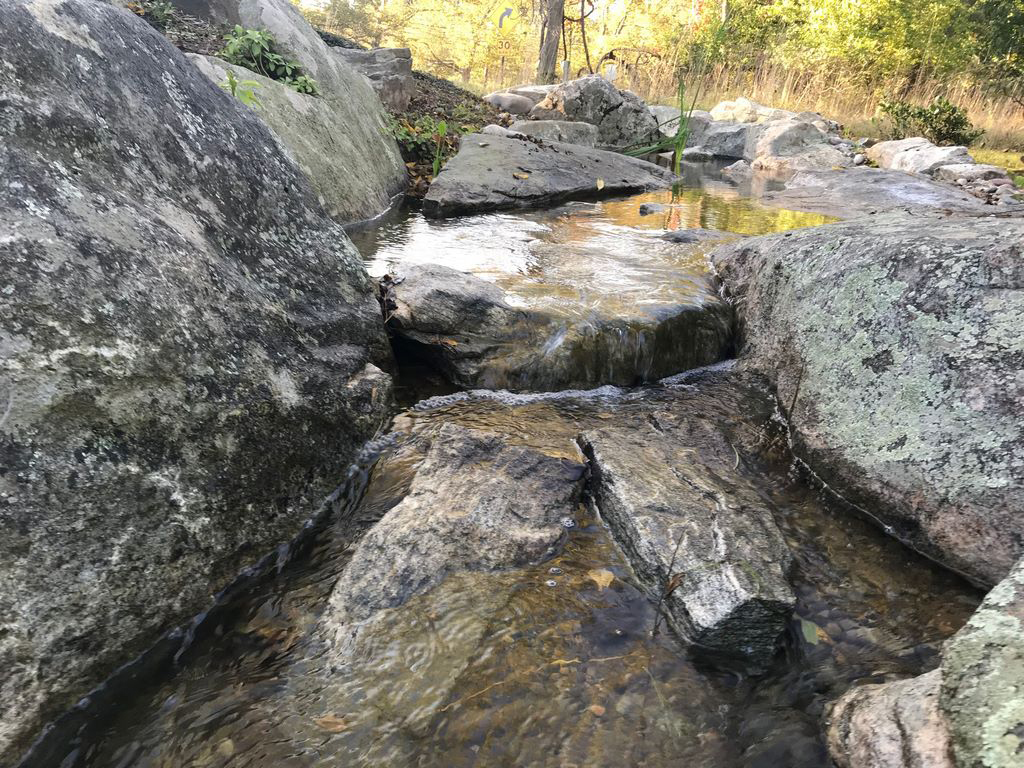 He envisioned a natural process when thousands of years ago, the area was under ice, which in fact it was. As the ice slowly moved through the area, it carved the land and left all these stone formations behind. Consistent with that type of geological deposit, the boulders on the project all roughly point in the same direction and are distributed in a way that you commonly see in areas that have been formed by glacial activity.

In the pond, the stones are arranged to create a clear separation between the shallow and deep areas. The narrative was that the early settlers in the area created a quarry that has since filled with water. On one side of the deep end, you can even see the face of the rocks that had been cut as part of the quarry operation. We also picked up that theme with a beautiful millstone table, which were common in the area during the days of the first settlers.

In one way or another, everything had a narrative, which the clients loved. It wasn’t just a matter of “here’s the pool.” Stories are stitched into the scene that make the space infinitely more interesting and are now points of pride for the clients.

While the process of working with Anthony was pure joy and artistry, the installation was not without its challenges. Weather was a big issue. When we were building the regeneration zone, we put up the composite walls and installed the Portland cement floor, and then had to stop for two months because of inclement weather. We had all the boulders delivered and everything was ready to go, but we just had to wait it out, which was frustrating for everyone.

The regeneration zone more than doubled the size of the system, so it was a bit undertaking. It is a completely separate vessel from the gunite pool, even though they appear conjoined. We built the regeneration zone similar to how you build vinyl liner pools. In this case, the wall system was provided by Fox Pools; but, unlike a packaged swimming pool, the walls and 60-mil PVC liner are hidden from view. 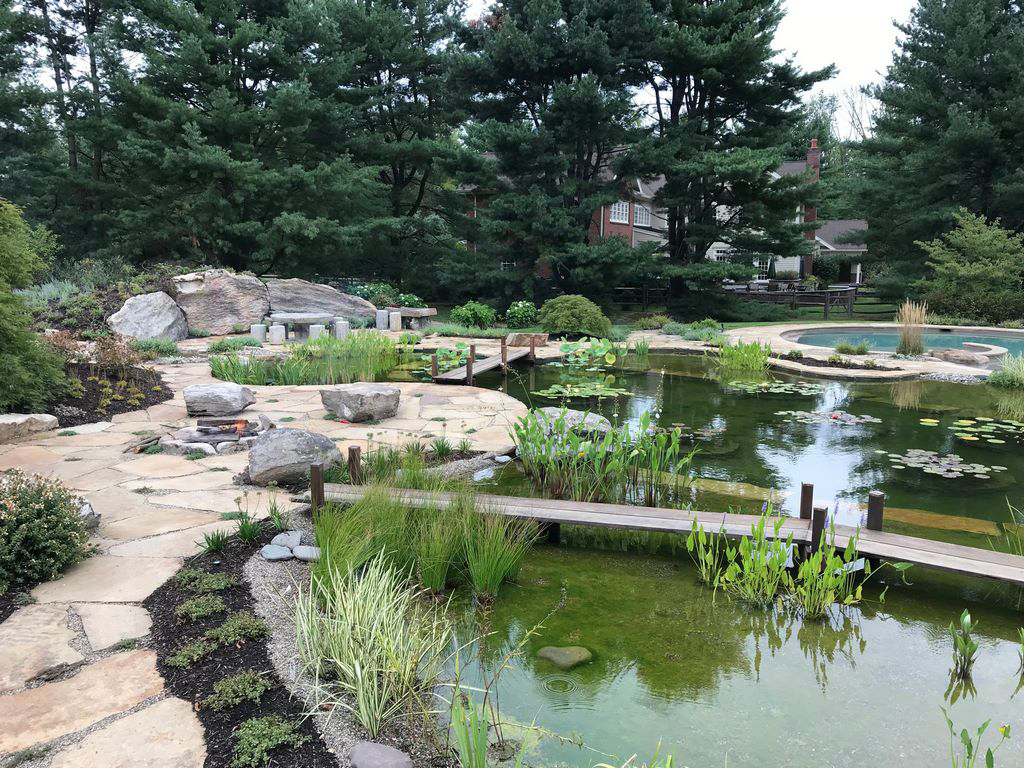 The pond is filled with gravel, which gradually slopes up to the tops of the walls, concealing the vessel’s structure. There are a couple of vertical areas where the liner is visible, but because it’s dark green, you never notice it. Now as the aquatic and terrestrial plants have grown in, and are hanging over the edge, it looks very natural.

The regeneration zone includes several raised planting pockets that enable the aquatic plants to break through the surface. We used the same paving material we used on the deck and built a series of pots that contain planting media for the various water lilies and lotuses.

Much thought went into the plant selection. We have, for example, a mix of nocturnal and diurnal blooming plants. We even included some tropical lilies, which are spectacular looking, but do need to be replanted every year because they cannot survive the winter water temperatures. We used those in only a couple of locations.

The plant mix, and what you need to do to support them in terms of depth and planting media, is all part of our “secret sauce” when it comes to creating these regeneration zones that are both beautiful and effective from a treatment standpoint.

We spent a great deal of time and effort developing and installing the areas around the water. This setting includes a variety of deck areas with different vantage points in relation to the water. We have pathways that meander along the stream and cross it in a couple places.

The entire scene is designed to bring you in close proximity to the water. You can enjoy it from a number of different places every day. It’s a terrific space for gatherings or for solitary relaxation and reflection. Throughout the entire process, the clients trusted that whatever we did, in the end it would make sense. Only a very few times did they ask us to change anything. They were involved and always curious, but also gave us tremendous creative freedom. Mostly, we used our imaginations to be creative on their behalf.

In the end, the transformation exceeded everyone’s expectations, both in terms of performance, and how great it feels to be there.

Ryan Harmer is a project and customer relations manager for BioNova Natural Pools. He holds a masters degree in communications and a degree of Master of Professional Studies in Leadership Education and Development from the University of Maryland. He served 14 years in the U.S. Navy serving as a flight officer, navigator, communications officer and tactical coordinator. After leaving the Navy, he worked in for the U.S. Department of Interior. He has been with BioNova for three years.